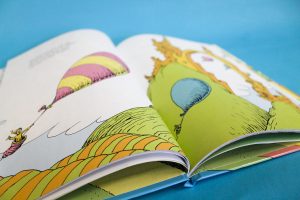 With this year’s Homecoming theme being inspired by the always iconic Dr. Seuss, here are some facts about the beloved children’s author that you probably didn’t know. This goes beyond all of that “Theodore Seuss Geisel is his real name” nonsense because basically everyone who made it past the third grade knows that.

Sources for these facts: a thirteen-page research paper I wrote freshman year and also a Dr. Seuss anthology my mom got me for Christmas. (Thanks, Mom).

1. Why the “Dr.”? Geisel said that his dad always wanted him to study medicine, so he decided to make his pseudonym “Dr. Seuss” in order to appease him.

2. Books that Dr. Seuss wrote that he didn’t think were good enough to be “Dr. Seuss” books are published under the name “Ted LeSieg,” the surname of which is “Geisel” spelled backward. The Ted LeSieg books also have different illustrators.

Seuss was on a boat from Europe back to the U.S., and the motor of the boat kept thumping in an anapestic rhythm that he just couldn’t get out of his head. As a result, 1937’s And to Think That I Saw It on Mulberry Street was born. Almost all of his books are written in this meter, and it’s one of his signature characteristics.

4. In addition to drawing crazy creatures, Dr. Seuss made sculptures, too. Think moose heads, except they’re “Blue-Green Abelards” or “Mulberry Street Unicorns,” not moose. These creations hung in his home.

5. There’s a Broadway show called Seussical that ran from 2000-2001. It mostly draws on the plot from Horton Hears a Who, but over a dozen different Seuss books contribute to the story, and it’s got a pretty fun soundtrack.

6. Seuss’ California license plate read GRINCH. Most people tend to think of Seuss as more closely identifying with The Cat in the Hat, but he also confessed to having quite a bit in common with the Grinch, too.

7. Many think that The Sneetches was inspired by racism, and that’s not wrong, but it’s not entirely correct. It was actually written as a response to anti-Semitism. Along the same vein, Yertle the Turtle is meant as a metaphor for Hitler.

8. And now, for the fact that sucks: Dr. Seuss cheated on his first wife, Helen Palmer, and she committed suicide when she found out. She was also dying of cancer. Yeah.

And now that you are so much more informed about our school’s Homecoming theme, go out and enjoy all the shenanigans!