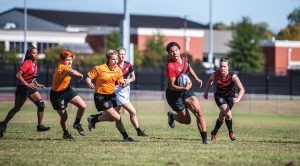 As the mid-evening sky dimmed black, a number of women were at the Preston Complex on South Campus. Grass stains inked deep into worn fabric and sweat beaded along the women’s foreheads as their hands lurched forward to clutch their knees. Repeatedly, the women threw themselves into a thin blue blocking pad, stood up, then lowered themselves again to the still, damp earth to complete pushups. A steady flow of 2000’s hip-hop music pumped from nearby speakers as the women gasped and drew breath.

Founded at WKU in 1996, the WKU Women’s Rugby Club provides players the opportunity to compete and grow together as athletes and members of a community. The club’s president, Cleveland sophomore Fiona Wasson, said rugby is often seen as violent or barbaric, but she believes the sport is more sophisticated than people might expect.

Though Wasson just started playing rugby last fall, her family has a history with the sport, as her uncle played rugby in England for years, where both of Wasson’s parents were born and the modern game of rugby originated. Wasson said she sought out the women’s club at WKU after reflecting on the influence rugby has had on her family. 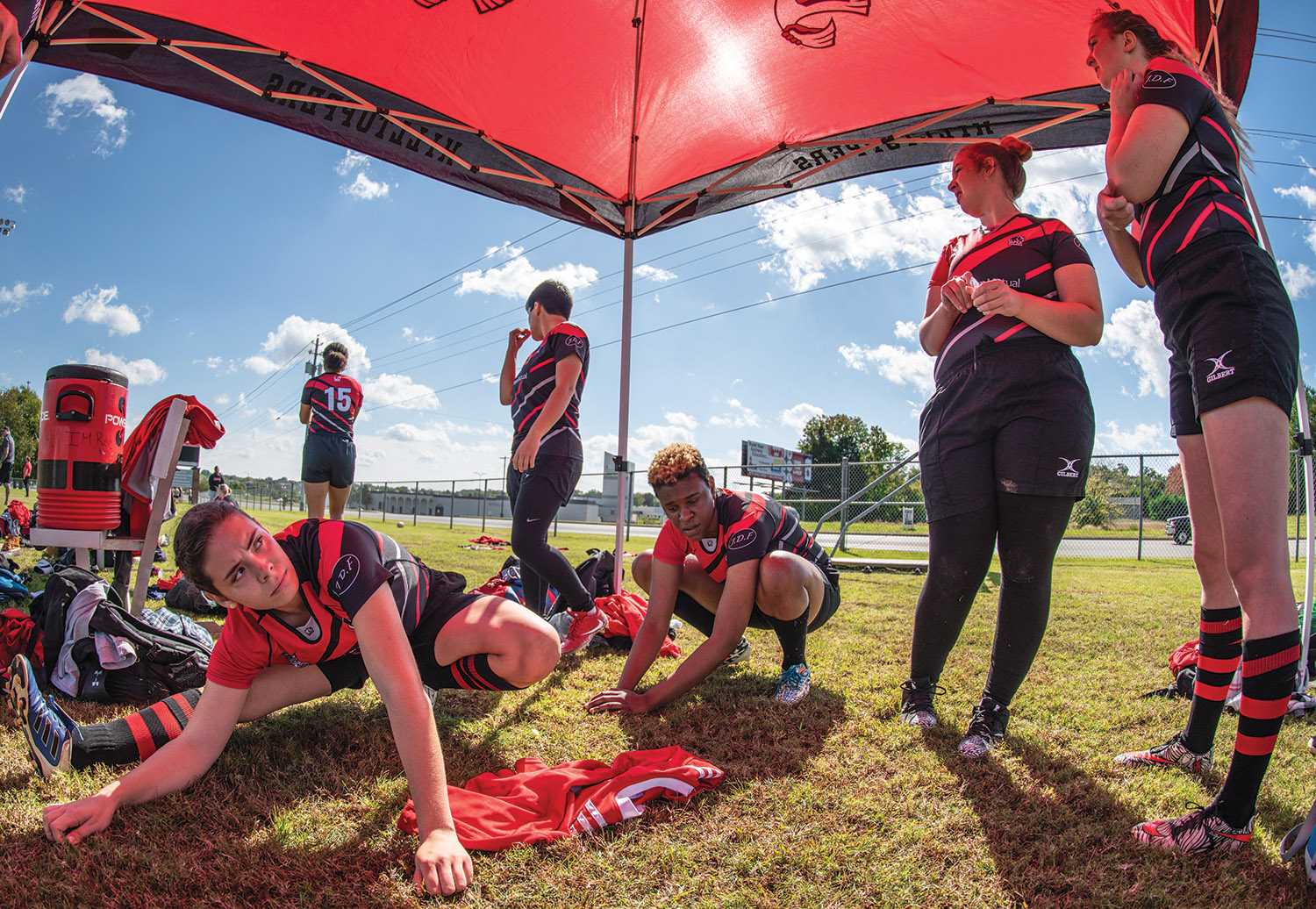 Wasson said she believes woman rugby players are sometimes stigmatized as primarily “butch lesbians” — lesbian women who prefer to look and dress in a traditionally masculine fashion. However, Wasson said rugby attracts not only women from the LGBTQ community, but also women of all races and shapes and sizes.

Though Wasson said many women’s rugby clubs are LGBTQ-inclusive, that does not mean woman rugby players, especially those part of WKU’s club, all identify as members of the LGBTQ community.

“We’re very LGBTQ-friendly, and that’s why we get that look,” Wasson said. “It doesn’t mean that we look for that. I would like anybody on the team as long as you’re open-hearted and you’re accepting of everybody. That’s the biggest thing that we push.”

Spokane, Washington, senior Haley Braxton, the club’s head captain, transferred to WKU at the beginning of the fall 2017 semester from Chabot College in Hayward, California. After playing the sport for years in California, Braxton said she came to WKU with rugby in mind. She said rugby is special for its appeal to all kinds of people.

“It’s the sport for anyone and everyone,” Braxton said. “I mean — big, small, fast, slow — it does not matter what you look like. You can play rugby. It’s truly one of the most inclusive organizations I’ve ever been a part of.”

Braxton said rugby has helped her break physical and social barriers. She said she has become more outgoing and willing to express herself since joining the sport.

“Maybe, like, six years ago, I was not who I am today,” Braxton said. “I definitely think rugby has helped shape me into that person.”

April Schleig, the founder and current president of the club’s alumni association, played with the club as a student from 1997 to 2000, then served as faculty adviser from early 2009 to mid-2018. Schleig said the club has always centered itself around being accepting of everyone.

“We were never there to judge anyone,” Schleig said. “We’re like a big family.” 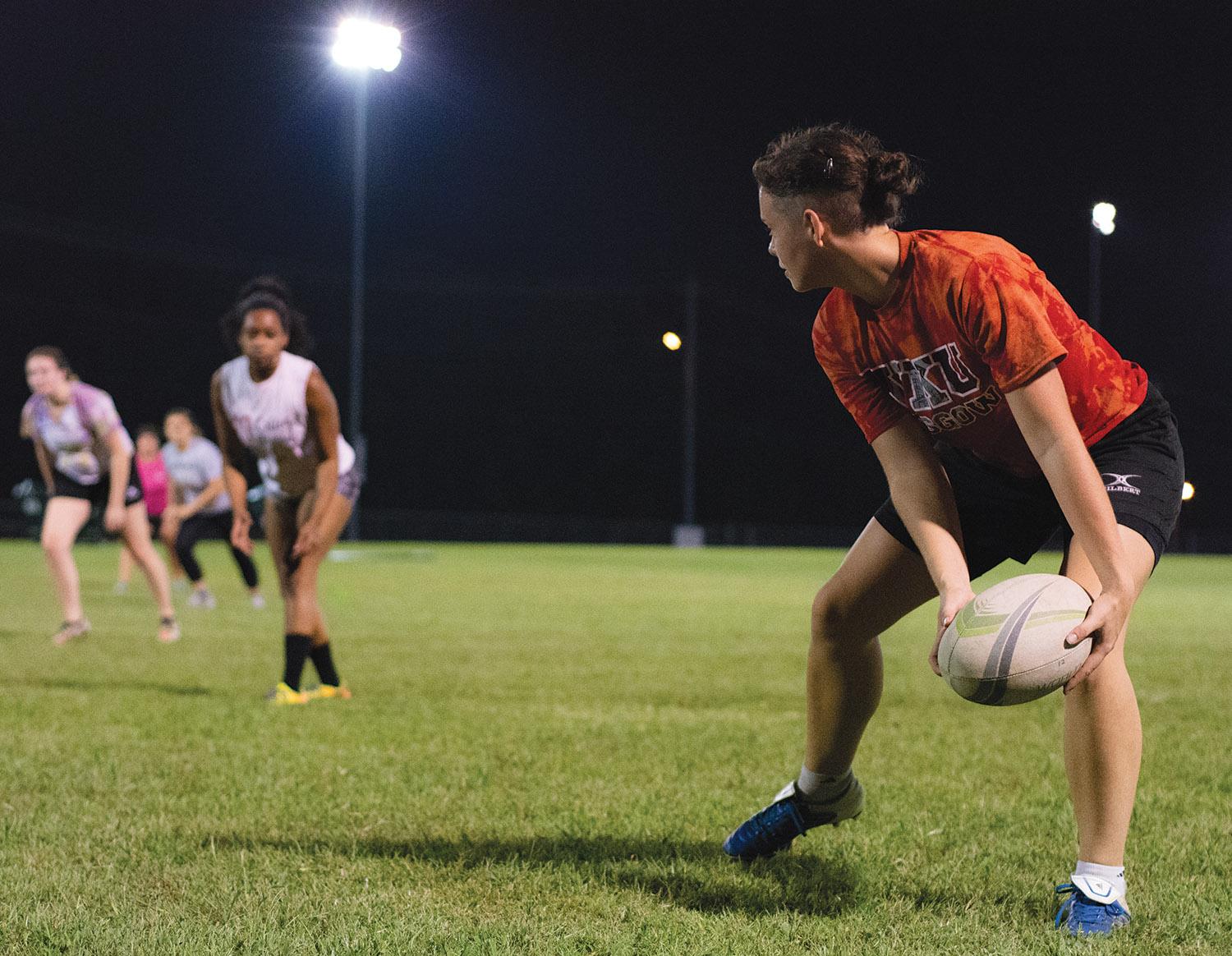 Glasgow junior Lee Wright begins a drill at the Hattie L. Preston Intramural Sports Complex at practice in preparation for a match in Huntsville, Alabama. The team plays five matches this season and meets twice a week to practice. (Photo by Chris Kohley)

Schleig said she believes participants in the WKU women’s rugby tradition, past and present, are connected through the sport’s intense physicality and supportive nature. She said rugby demands cohesion among teammates at all times.

“You’re really putting your body on the line for each other,” Schleig said. “Rugby really focuses on community and being part of something.”

For anyone who might be unsure of where or how to fit in, Schleig said she believes rugby is a great place to start.

“We’re here to love and support, and the only thing we’re looking for is dedication to the team and our values,” Schleig said. “We’re a great place to belong.”

White House, Tennessee, sophomore Dana Griffith joined the club at the beginning of the fall 2018 semester. Griffith, who identifies as a lesbian, said she was immediately drawn to the club for its welcoming nature.

“We’ve got some of everything on the team,” Griffith said. “Come as you are, and they’ll take you for who you are.”

As someone who has participated in sports like soccer, softball and karate for over a decade, Griffith said she enjoys the physicality of rugby. Griffith said she believes the women of WKU’s club are well-acclimated to its demands.

“It’s a contact sport,” Griffith said. “Me being in karate, I love hitting people. We’re a tough bunch.”

Griffith attended Volunteer State Community College in Gallatin, Tennessee, before transferring to WKU for the fall 2018 semester. She said the women’s rugby club has helped her acclimate quickly to what was once an unfamiliar university. Griffith said teammate Lee Wright made the transition particularly seamless. 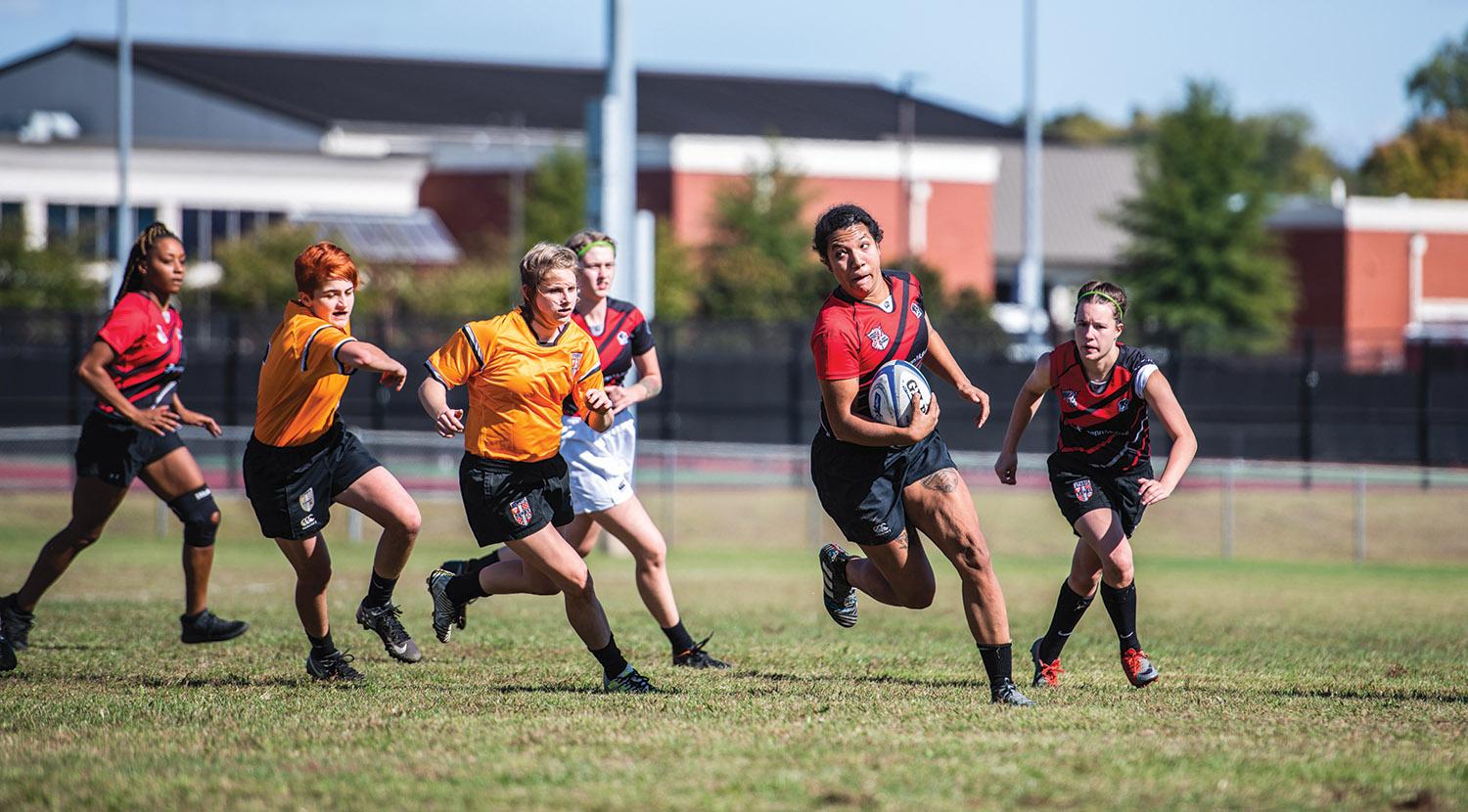 “She’s just awesome,” Griffith said about Wright. “She’s pretty quiet, but once you get to know her, she’s like, ‘Yeet.’”

Wright, born in Barren County near Glasgow, is a junior and serves as the club’s vice president and co-captain. Wright identifies as queer and said she partly joined the club because of its appeal to a diverse group of people.

“It’s not just one kind of person that plays rugby,” Wright said. “There’s people from all over the spectrum.”

Wright said she believes rugby is progressive for its ability to empower women to embrace an aggressive and stereotypically less-than-feminine side. During her first practice with the team, Wright said she felt strong, tackling others and standing back up after being tackled herself.

“I liked that feeling of getting back in touch with some kind of, I guess, aggressive side,” Wright said. “After you go through puberty, it’s like you’re not supposed to do that anymore.”

Now a second-year member of the club, Wright said she’s more confident in her strength and ability to take a hit than ever before. In fact, she said she finds it funny when people apologize for accidentally bumping into her while walking to class.

“You’re treated like you’re just this fragile little thing, and I just walk around knowing what I’m capable of physically,” Wright said. “That’s really freeing and empowering, for me, knowing that I can tackle somebody. I can take a tackle and get right back up and keep fighting.”

Though she acknowledges women are sometimes stereotyped as incapable of handling themselves physically, Wright said she believes the women’s club confronts that misconception head-on. The sport is not only demanding in terms of strength and stamina but also often dangerous when not practiced properly, Wright said, which she believes makes rugby gender-defying.

“It’s just accepting that there’s more than one way to be a person,” Wright said. “I’m a girl — that’s what the world wants to call me — but I don’t have to be a certain way to be a girl.”

Wright, who has an anxiety disorder, said rugby functions as her stress relief. She said nothing else invigorates her like running and rucking — the rugby equivalent to tackling in football — alongside her teammates.

“I have anxiety, so I’m usually worrying or nervous even before practice and especially before a game,” Wright said. “But once we begin working together, I feel myself open up, and when the adrenaline rushes through me, there are no more worries. Nothing really exists other than the game at that point.”

Since joining the women’s club and spending more time with its members, people Wright describes as “unapologetically themselves,” she said she’s grown more comfortable with being herself, whomever that might be. 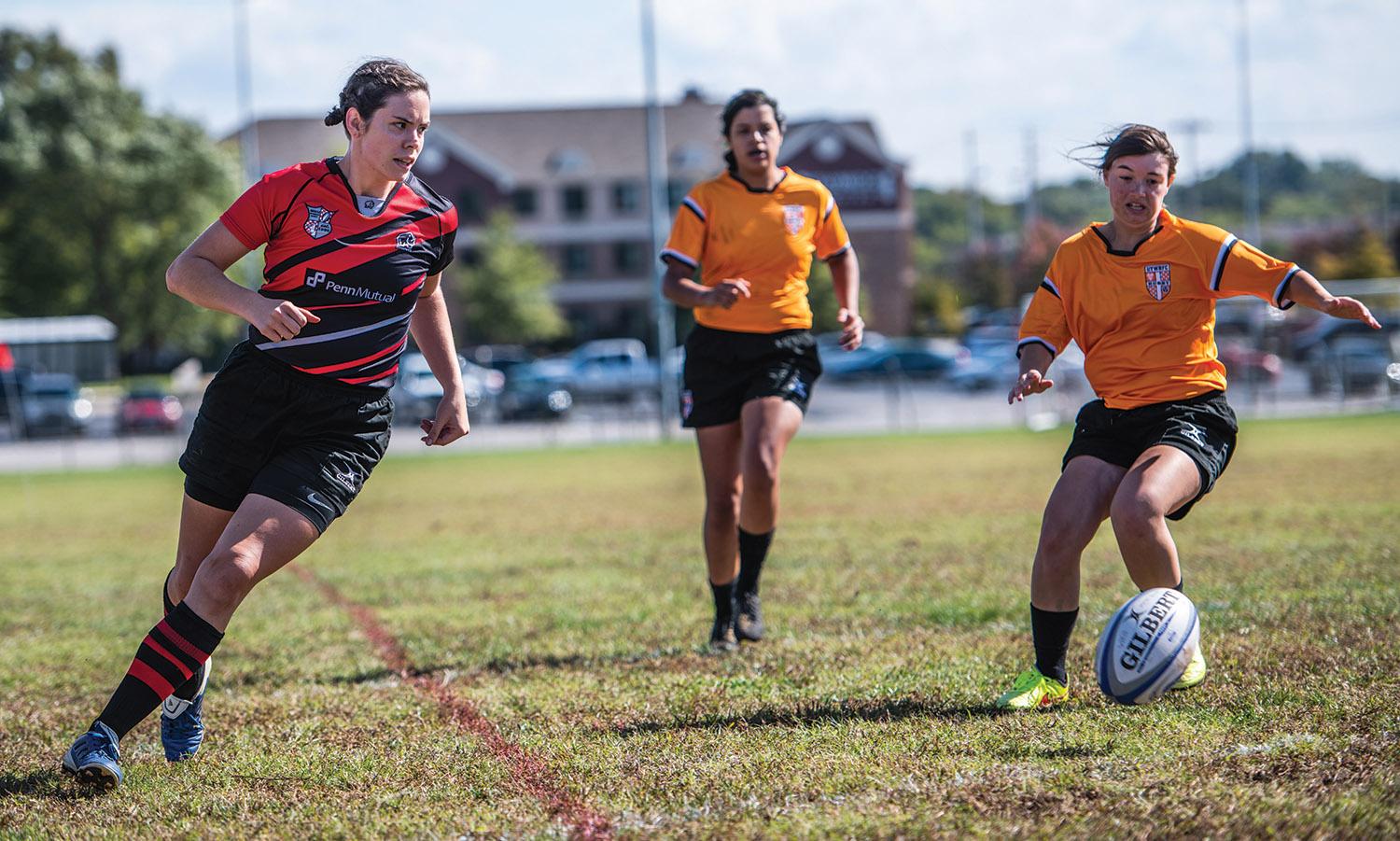 Glasgow junior Lee Wright chases the ball in a match against Tennessee at the Hattie L. Preston Intramural Sports Complex on Saturday, Oct. 20. The Volunteers beat the Hilltoppers 29-20. (Photo by Chris Kohley)

“When you’re in rugby together, you’re spending your time in practice together,” Wright said. “You’re playing games together, bleeding for each other. We’re all a family.”

Wright said she encourages other women to welcome the sides of themselves that aren’t so pretty — to find beauty in power and pleasure in pain, no matter the source.

“Even if they don’t want to join or aren’t interested, know that you’re just as capable,” Wright said. “Know that you can be just as tough, just as strong, and don’t let anyone discourage you from that.”

Wright said the WKU Women’s Rugby Club is alive and moving, and she plans to help keep it that way.