According to its founder, Bowling Green Powerhouse is dedicated to creating a culture of committed athletes and a stronger community. It was created by Stephen Burba, a WKU alumnus, one year ago. After Burba graduated in 2015, he took on an unexpected challenge of opening his very own gym.

The facility hosts organizations and clubs like strongman groups, which are training groups for a specific type of competitive weightlifting. It also welcomes those interested in powerlifting, weightlifting, body building or general fitness. Burba said Bowling Green Powerhouse is working toward making a presence in not just the region but the entire state of Kentucky. Talisman photographer and writer Hayley Robb set out to capture this unique community of athletes. 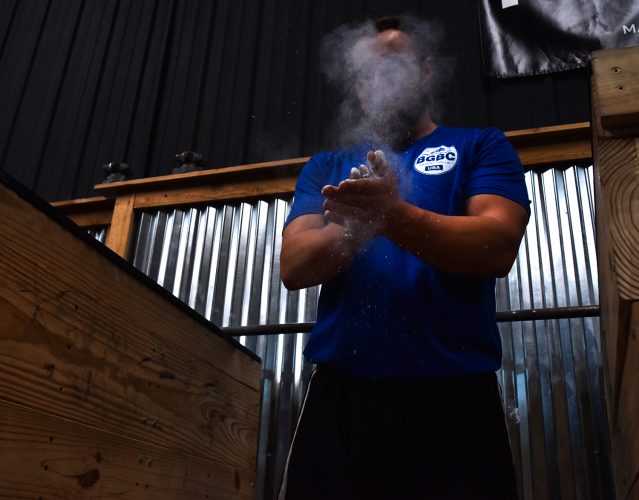 Stephen Burba, 26, graduated from WKU in 2015 and soon after took advantage of an opportunity to open his very own gym. Bowling Green Powerhouse gym is approaching one year since it’s grand opening in January 2017, and Burba says his only goal for the gym was to have a culture centered around determined athletes. “I have always wanted a place that tailors more towards the mentally determined instead of just providing an ecosystem to do whatever you want,” Burba said. “Our marketing is geared only towards people who are super determined — whatever that goal may be. So we’re not just a powerlifting gym or a strongman or a weightlifting gym. We’re a determined gym.” 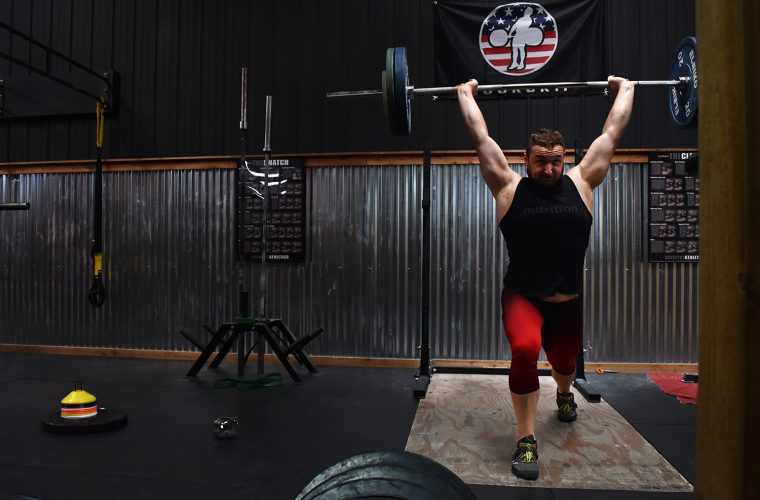 “I don’t look at fitness like most people do,” Burba said. “It’s not about being healthier in one aspect or stronger. It’s about being my best self.” Burba trains in his own gym just as any of his clients and strongman competitors do, and he motivates his own fitness by challenging himself, too, everyday. “You want better confidence,” he said. “You want to feel better when you wake up, and that comes from different challenges and pushing yourself in every aspect that you can find in the gym.” 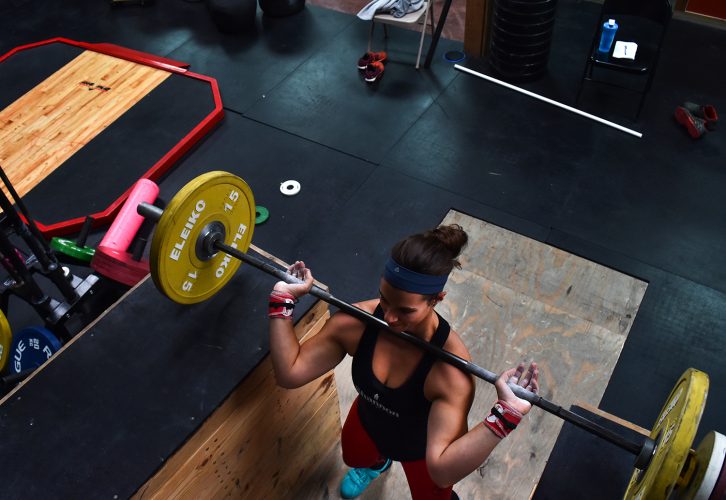 Nikki Stock, 25, prepares to perform the split jerk, a powerful overhead Olympic weightlifting movement that requires the feet to jump and split. Stock discovered Olympic weightlifting as a sophomore in college and has learned from multiple weightlifting coaches since then. She got involved with the Bowling Green Powerhouse gym when Burba, her boyfriend of two years, took on the opportunity last January. She plans to invest even more time in the gym when she moves closer to Bowling Green and becomes a weightlifting coach for the gym and a personal trainer. “Sky’s the limit, pretty much,” Stock said. “We have a huge demographic that’s not catered to, and we’re the only gym like this here. Eventually, as we get more people involved and more coaches involved, it’s just going to be a really great place for everyone.” 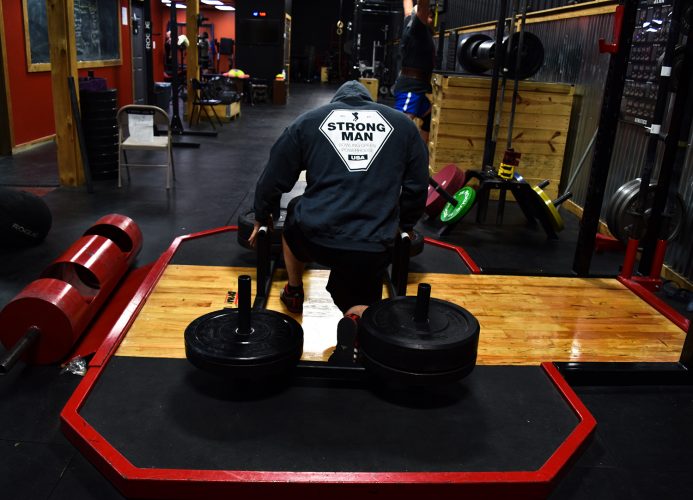 Tyler Young, 28, kneels before pulling a side deadlift. Young started the SOKY Savages, a strongman group out of the Bowling Green Powerhouse gym, after being inspired by watching the “World’s Strongest Man.” Young said strongman, to him, is about pushing the limits of human performance, lifting boulders, deadlifting cars, pulling trucks and planes. He said it is about “becoming better humans through strength development.” After learning that there were other weight classes that everyone could enjoy, Young jumped right in. “A lot of people get paranoid, they see us lifting these big tires and picking up trucks and stuff like that and they’re afraid to come out and give us a shot, but strongman is for everybody,” Young said. “We work with all experience levels, all strength levels.” 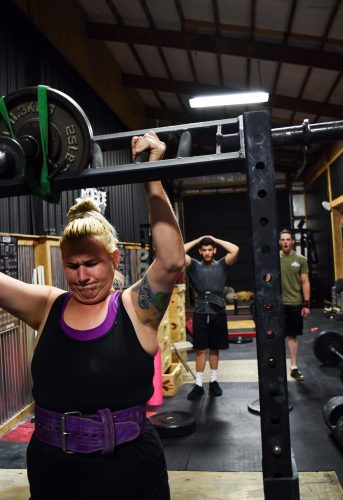 Heather Phelps, 29, uses a viking press to successfully perform a “press medley,” or series of overhead pressing movements, in preparation for the Mammoth Strength Challenge in January 2018. The Bowling Green Powerhouse strongman team consists of around 20 competitors, and Phelps is one of the only regular females at their weekly practices. 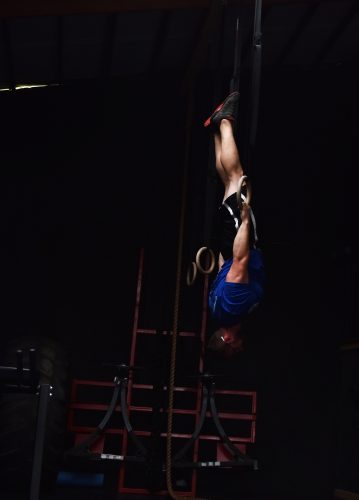 Burba hangs upside down from gymnastic rings located in the back of the warehouse, finding any excuse to spend his day in the gym. He said the more he trains with people, the more he realizes everyone is just trying to become their best selves, whether that is by diving into something new in the gym, by mental strength or by weight loss. “Never give up,” Burba said. “Every day is going to be tough. Pushing through the tough days, whether it’s once a week or once every other week —the hardest day you face will get you the best results in your training. So always be ready for your toughest day, and you’ll never stop.” 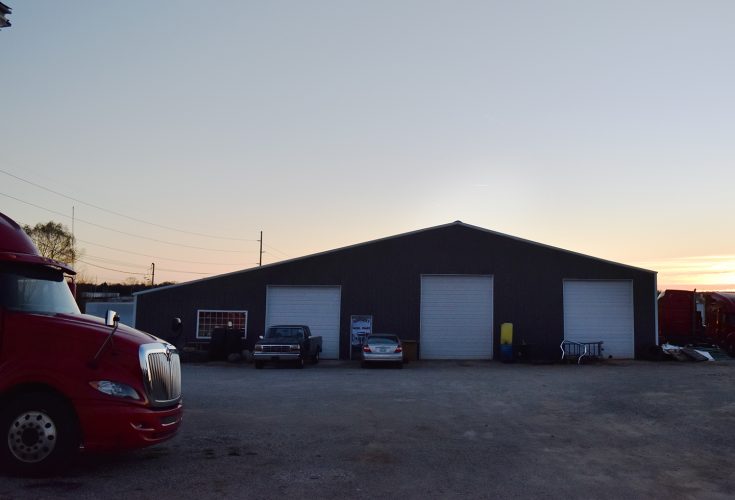 Burba said he never considered owning his own gym. The opportunity to partner with an old client he had trained, named Mirsad Osmanovic, and open up the facility just turned into something much bigger than he imagined. He said his goal for the next year is to become the most competitive gym in the state of Kentucky, and in five years he wants Bowling Green Powerhouse to be the hub of Olympic lifting, powerlifting and strongman competitions. The old warehouse channeled its industrial zone roots and used a factory logo to brand the gym as an industrial work zone creating what Burba hopes to be “the spot” to go to in the years to come. “What it’s done for me is just open the floodgates on everything I have ever wanted to try, apply from college or learn,” Burba said.