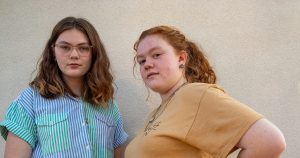 When Bowling Green sophomore Kenzie Crowe began playing electric guitar at the age of 16, she didn’t anticipate being the frontwoman of her own band or recruiting her 16-year-old sister, Laila Crowe, to play drums.

Girl Tones, formed in 2017, took the stage at Hope Harbor’s Summer of Love and Consent event at Tidball’s on Sept. 14. This was the band’s second live performance together — the first was at Hilligans in July. At the Summer of Love and Consent event, Girl Tones performed for a crowd of adults, who sauntered around the ‘60s-themed event with their bell bottoms and koozie-clad beers. The crowd was full of smiles and gave the duo a round of applause at the end of their set. Girl Tones next performance will be at Little Fox Bakery on Halloween, Oct. 31.

Inspired by the musicianship of The White Stripes and the feminist ideals that sparked the Riot Grrrl Movement in the ‘90s, Kenzie describes their sound as a kind of “punkish blues rock,” a paradox tinged with feminine and rage.

“I think angry music is the best way to express yourself,” Kenzie said. “A lot of our songs come from anger. It’s the only way to let it out.”

Kenzie said their song “Can’t Pause” is about overcoming anger and is directed toward a relationship gone toxic.

“I can’t pause my life for your shit,” she said while laughing. “That makes me angry.”

Kenzie said she wrote their song “Hope You Hate It” because she was mad at a teacher so she wrote a song about it.

Laila credits this blunt attitude to the gender norms that confine the society she lives in.

“Everything is gendered,” she said. “I went to the mall with my friends one day and saw a Clinique ad for men. I thought, ‘Wow! Is our skin different now too?’” 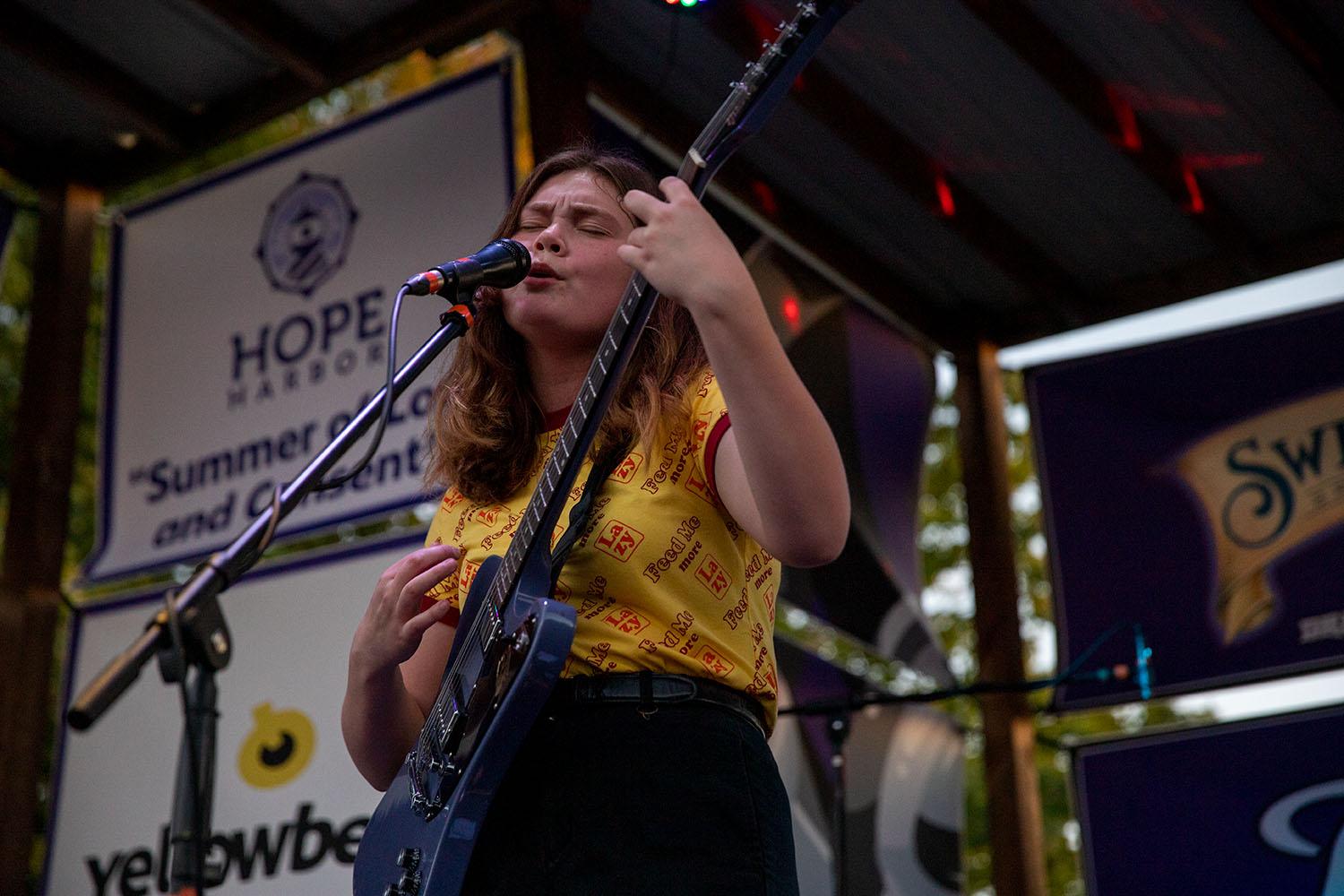 Kenzie Crowe, the lead singer of Girl Tones, a band composed of two sisters based in Bowling Green, performs at the Summer of Love and Consent event hosted by Hope Harbor at Tidball’s on Saturday, Sept. 14. The event was hosted to raise funds for Hope Harbor, a local nonprofit organization that provides counseling and resources for those who have experienced sexual trauma.

Kenzie said this sense of feminine confidence, however, truly originates from the examples set by their mother, Carol Crowe, a musician and former biologist.

“I started playing music in the fourth grade,” Carol said. “I played percussion all the way up until high school, and I joined the marching band.”

After picking up other instruments such as the flute and piccolo, the stresses of her musical responsibilities became “too heavy” Carol said, and she eventually quit playing music.

That changed when the Crowe family formed “Kenzie Crowe and the Flaming Hots” in 2016, a band that consisted of Carol, her husband Kevin, and of course, Kenzie and Laila.

Carol began taking bass lessons for the band. This was something that inspired Kenzie and Laila to keep playing music.

“Having my mom play with us in the band was such an amazing experience,” Kenzie said. “The fact that it was my first time being in anything was awesome, and I was doing it with my family. I wanted to do it all the time.”

Her mother, who is admired as a bass player by her daughters, tends to think otherwise about her bass abilities.

“I wasn’t that great,” Carol said as she laughed. “It was my first time playing anything in so long, but I knew how to learn a beat. I’m just so glad I was able to perform with them. I’m 50, so to play with them 35 years later was so nice.” 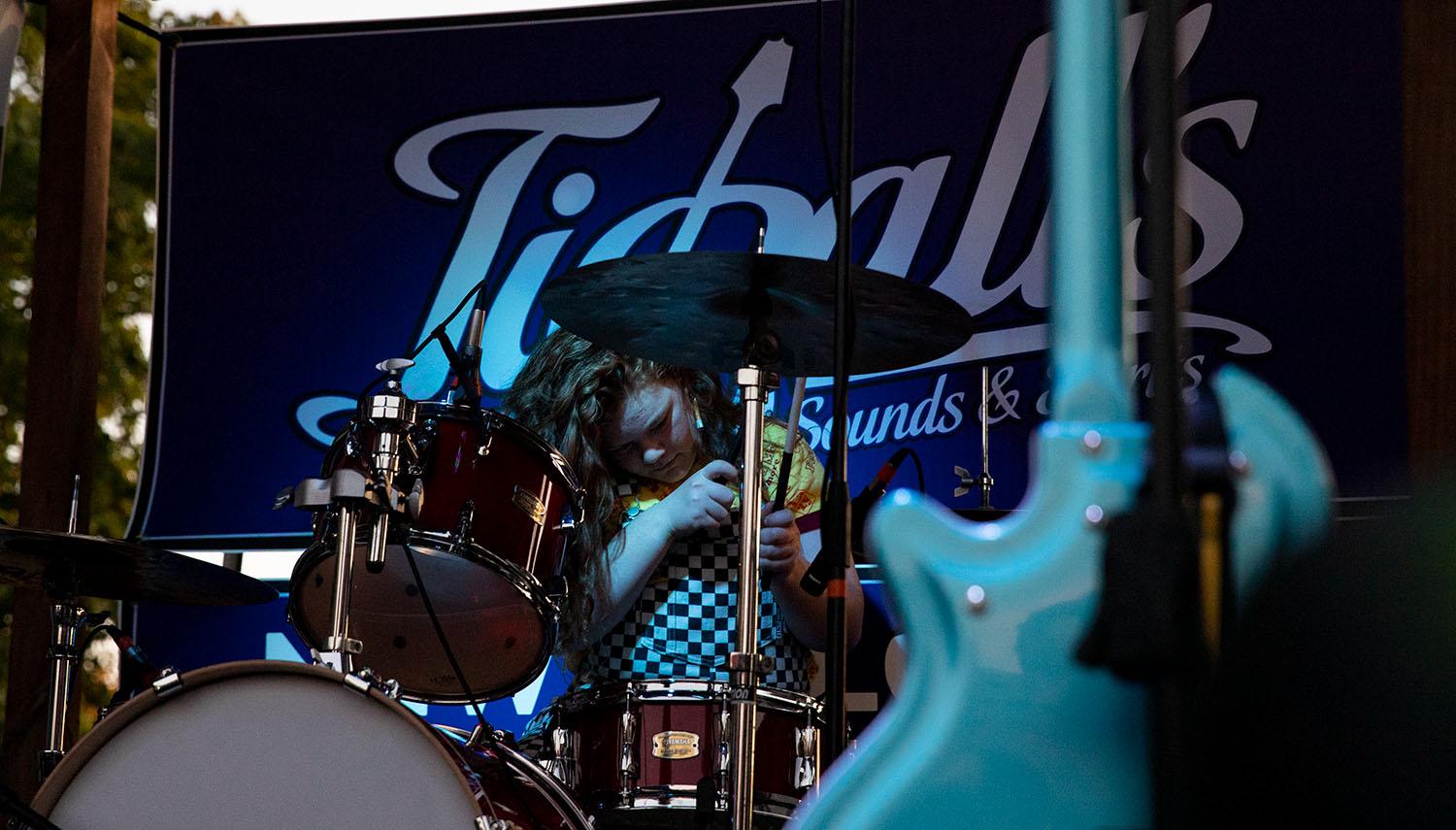 Laila Crowe, drummer and a singer of Girl Tones, performs at the Summer of Love and Consent event hosted by Hope Harbor at Tidball’s on Saturday, Sept. 14.

During the girls’ childhood, the family always felt that it was important to protect them from people that would judge them.

“We chose to homeschool the girls after me and my husband’s experiences in high school,” Carol said. “We weren’t the popular kids. I’m a Hispanic, so being a Hispanic and coming to the South, the kids picked on me. We weren’t in the circle.”

Carol said adults would judge Kenize and Laila as children, laughing at them as they rolled around on the floor in public spaces and the silly faces they would make at people. She said that her own father laughed at the way she raised her children. However, Carol said that she saw their behavior as a “freedom of expression.”

“We let them be themselves,” Carol said. “We wanted to foster an environment where they didn’t need to feel embarrassed for the things they did or loved.”

In addition to enforcing a positive environment, Carol said that her and husband listened to a lot of different music, and  tried sharing the music they loved around the house. She said that artists such as Stevie Wonder and James Brown were collective favorites.

“Justin Bieber and the Jonas Brothers weren’t allowed in the house, we definitely did that on purpose,” Carol said. “Barney was also off limits.”

Strength and empowerment has always been something that has been instilled in the Crowe family, between working at a farm predominantly run by young women and being raised in a musical family. Laila said this has given the sisters a chance to put things in perspective and create music that reflects positive relationships between themselves and the women around them.

Kenzie worked there for four years before she quit when starting college.

Kenzie and Laila worked with six other girls. Three of them were sisters who were also daughters of the owners of the farm, Michelle and Nathan Howell.

“The sisters were homeschooled like me, so I think that’s what made it even more of a close experience,” Kenzie said.

Ultimately, Laila admitted that this was one of the most pivotal experiences that shaped their feminine mentality, showing the girls that women are capable of doing the things men can do, regardless of age, size and strength.

“Working with the girls at the farm made us all feel like we were figuring it all out together, and it put things in perspective,” Laila said.

What was once viewed as a daily job turned into something much more for Kenzie and Laila, a lesson in feminine power that they would express through the music to come. 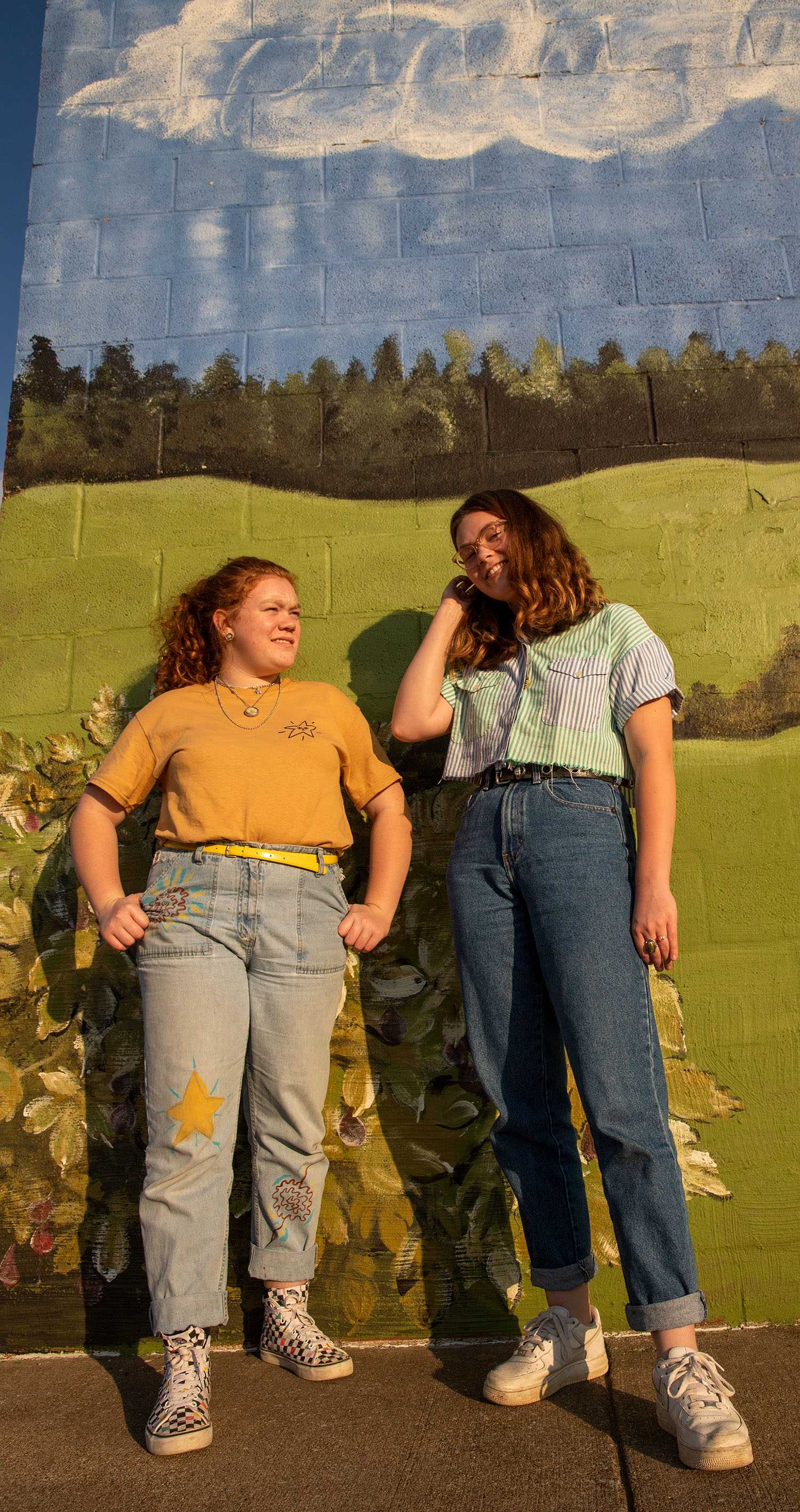 Laila (left) and Kenzie Crowe have been playing instruments together their whole lives. The duo started Girl Tones, a local “bluesy punk rock” band based in Bowling Green, this summer. “I started the band with a friend and it just unfortunately didn’t work out,” Kenzie said. “I still wanted to play though and I just needed a drummer. I finally thought ‘Well, why not Laila?’”