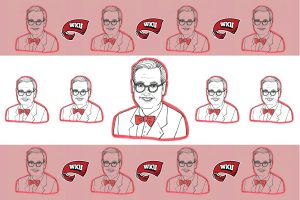 In late January, the Board of Regents named Timothy Caboni the 10th president of WKU. It was an exciting time, but after the flurry of excitement settled, many were left pondering who exactly this man was.

Although you could easily Google his name and find information for yourself, we know that news sources can be hard to trust these days. So, in the spirit of full disclosure and hard-hitting journalism, we deliver to you some of the most ethically-sourced* information on WKU’s new papa.

*Disclaimer: None of these have actually been verified.

The first, and perhaps most important, discovery surrounds Caboni’s real name. After some serious digging and blackmailing of family members, we uncovered that Timothy Caboni is in fact “Temothy Chobani.”

Apparently, Caboni lived for 18 years as “Tem Chobani,” son of Chobani yogurt’s founder, before finding the status of his wealthy family too much to bear. Thus, he turned away from his roots to pursue a more academic route — away from the milky family biz.

But what about his academics, you may ask? Contrary to WKU News reporting, a thorough search through the student files in the basement vault of Wetherby Administration Building revealed that although Caboni attended WKU, he did not receive his master’s in corporate and organizational communication. He actually attained a double degree in Claymation film-making and puppet theater.

In addition to finding Caboni’s true degrees, an original Caboni Claymation feature was also discovered. The subject of the short film was a forlorn Big Red in a post-apocalyptic world, looking for love amidst fire and garbage.

Spoiler: the 13-minute long tale does not end well for our beloved mascot.

On a more cheery but just as fascinating note, some truth surrounding the president-elect’s bowties was also uncovered. Although Caboni’s bowties are an already iconic staple of the 10th president’s wardrobe, few know the incredible story behind his whimsical accessory.

According to our sources, each of Caboni’s bowties was handcrafted by a German monk named Abelard Weber who lives in a tiny cottage in the Alps.

Allegedly, Caboni met Weber during a family trip abroad, and the two became fast friends. Sources tell us that the pair struck a deal for Caboni to provide a lifetime supply of his family’s yogurt in exchange for a lifetime of bowties.

We have reached out to Weber for a quote, but we are told by nearby villagers it may take six more weeks before his messenger goat reaches his humble abode tucked away in the mountainside. We’ll keep you updated on this developing story.

Getting to the truth

And although there could be as many more installments of these discoveries as my imagination permits, we will wrap up here with one truth: we welcome you to the Hill, Caboni.

We’re excited to see what you have in store.

(And we wouldn’t be mad if these were true. Just give us a call if there’s ever something you’d like to share.)