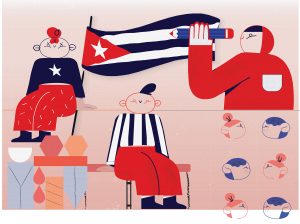 Cloaked in mystery and misconceptions, Cuba can be a controversial region. Both a tourist destination and an enigma, it can be easily characterized by its unique complexities.

The WKU community got a glimpse into this island country during a kickoff event for the International Year of Cuba earlier this September. The Sept. 4 event, “Cuba 101,” focused on the history and culture of the country and its role in foreign relations with the United States.

“Despite its proximity to the U.S., Cuba is often shrouded in mystery,” said Lauren Reyes, coordinator for the Office of International Programs.

During the kickoff presentation, history professors Marc Eagle and Andrew McMichael illustrated many aspects of Cuban life, including its economy and historical relevance. They paid great attention to explaining the complexity of the United States and Cuban relations while also emphasizing the importance of greater cultural comprehension among WKU students and staff.

Eagle said he hopes the events will help both the WKU and Bowling Green communities learn more about Cuba.

“This involves not only learning some of the history of Cuba, but also developing an appreciation for Cuban culture and for the experiences of Cuban people,” Eagle said.

Reyes said the International Year Of program focuses on a single country each year with the goal to provide WKU students and faculty with a sense of interconnectedness and a better understanding of the world.

Reyes said before a country can be selected for the International Year Of program, the Office of International Programs must first call for proposals that are submitted by faculty groups with special knowledge of that country. These proposals then go before a committee to be evaluated on criteria like academic diversity and significant world events.

A perhaps lesser-known part of the International Year Of program is coursework that focuses on the year’s particular country. Certain courses integrate Cuban content into the standard curriculum by incorporating projects, readings and lectures, according to the International Year of Cuba webpage. For the fall 2018 semester, these courses include Introduction to Literature, World History and elementary Spanish.

Events celebrating the International Year of Cuba will continue throughout the academic year. Future events include two gallery exhibitions, guest speakers and a Cuban dinner.

The Island of My Love: The Faces and Stories of: An exhibition featuring the stories of art, artists, teaching and a photo documentary (Project Simple) curated by Miwon Choe (Art) and Jesús Molina (Director of Experimental Art School in Havana, Cuba).

Author Visit: Julia Cooke: A talk by the author of The Other Side of Paradise: Life in the New Cuba. Visit wku.edu/iyo to participate in the associated book club.