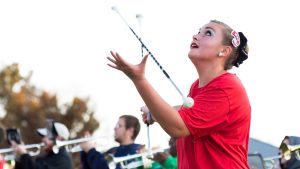 If you’ve ever watched the Big Red Marching Band’s halftime show, you’ll notice the band is divided into sections: horns, woodwinds, drum line, etc. The band works together in teams that stand in designated areas of the field — except for one member.

Look to the right or left and you’ll see Gettysburg, PA freshman Madalynn Alt twirling away with one, two or even three batons in her hand.

Alt is this year’s feature twirler for the marching band. She attends the same practices as the rest of the marching band, but she is the only member in her section. As someone who’s been twirling baton since age 4, Alt creates a new routine each week for the halftime show.

Some schools have multiple twirlers, but WKU’s marching band includes only one, or a “feature twirler.” Alt had to submit a video audition and do an interview to receive the position.

“The nice thing about being the only one is I can do whatever I want,” Alt said. “If there’s an open spot, I can run through the band and end up on the 50 yard line”

Some of Alt’s tricks include twirling, juggling and balancing the baton on her back as she spins around. At the football game against Florida Atlantic on Oct. 28, Alt broke out fire batons to twirl to Donna Summer’s “Hot Stuff.”

Still a freshmen, Alt is keeping some of her additional tricks up her sleeve to show off in the coming years.

Watch our feature twirler in action in the video below by Talisman photographer videographer Chris Kohley.