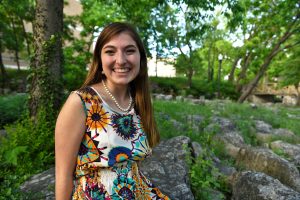 Dahmer will be sworn into office May 2 and will be moving into her office in June. She sat down with a Talisman writer to talk about herself and the plans she has for WKU during her presidency.

Q: What are some of your plans for WKU you’re most excited about?

A: I’m really thrilled to start working with Dr. Caboni. I think it’s really important that we establish a strong student voice, especially during his first year of his tenure here, because I think that the way that SGA will set the tone for this coming year is part of the way that Dr. Caboni will work with SGA for all of his following subsequent years on campus. What I’d really like to do is establish monthly or weekly meetings with him depending on his availability. Throughout the campaign, we’ve referenced that retention is our primary goal, especially from freshman to sophomore year with marginalized student populations, and that’s also Dr. Caboni’s goal. So just working on several initiatives, several pieces of legislation and high-impact practices that will allow students to have greater levels of retention.

Q: You’ve mentioned study abroad. Can you tell me more about that?

A: Basically, it would be increasing availability for students who would otherwise be unable to afford study abroad, and this is extremely important, especially in the first and second years because study abroad is one of those high-impact practices that makes students realize that they can do college; college has a purpose. And it also allows them to experience greater cultural access and have a greater window into the world. And I think that study abroad, especially for first-year and second-year marginalized student populations and at-risk student populations, is imperative.

Q: How do you plan to execute your plans for retention and study abroad?

A: I think it’s really important that we actually talk to students who are at risk, so I’ve made it my goal especially during the campaign the past two weeks.

Q: How do you feel your position as SGA president is important and effective in accomplishing things?

A: I think that it’s two-fold. The SGA president not only runs the Student Government Association, which has the real potential to impact students on campus through legislation — and that’s primarily been my experience over the past two years with the bills that I’ve written and the resolutions that I’ve worked on in the forums and all those events — but I think that, now, as student body president, I will also serve as the student regent for the Board of Regents, and it’s extremely important that we maintain the student voice in this board.

A lot of the members of the board are older alumni. We have one faculty member and one staff member who also serve as regents, but a lot of them are alumni that currently live in other cities and come back to serve on the board, so it’s imperative that we make sure that the voice of the students is heard in a context of people who are actually experiencing what would be implemented by the board on campus.

Q: Speaking of the legislation you’ve helped write in the past, could you tell me more about that?

A: Most of the bills that I’ve written or co-written have dealt with sustainability efforts, marginalized student populations, diversity and inclusion.

Q: What are you most looking forward to about being SGA president?

A: I’m really, really excited to work with my team. I know we’ve been at it for months just meeting together and working together, and I can’t wait — instead of focusing all of that energy on just a campaign — to actually work on implementing some of the legislation that students have talked with us about.

Q: How many pieces of legislation have you been involved in writing?

A: Twenty-two. That’s including my team.

Q: Are you planning on pursuing politics as a career?

A: My dream job would be working in foreign service. With my majors, I would really love to live in South America but then work with how Chinese investment in Latin America impacts U.S. foreign policy and U.S. involvement in Latin America, so that’s the dream, and that’s sort of similar to what I’m pursuing as a thesis, too.

Q: How long have you wanted to be president?

A: I guess the first time that I officially voiced it was my very first week at H4 because the Office of Scholar Development people asked everyone to stand up and state their big dreams, so my big dream was being SGA president, but I really had not taken any actions to implement that, and I wasn’t even sure that I was running until this school year, really.

Q: What do you plan to keep on your desk in your office?

A: I thought a little bit about what I’m hanging on my walls. I have a lot of art back in my home in Louisville, and I have some pictures of the very first time that I came to WKU.

My uncle was a professor here, and so when I was a little kid, I used to spend every summer in Bowling Green, so there are some key shots of me with Big Red as an infant, which are fun, and I also have this huge painting of the Kentucky Derby Festival — because I’m from Louisville, so that’s a big part of my narrative.

But actually on my desk — I’m a big knick-knack person, so every time I travel — you know those little dorky things you pick up in souvenir shops? I really love 3-D postcards. I have a couple from Taiwan, I have one from Australia and then maybe I’ll pick one out from China or something. So even when I’m here on campus, I can sort of be thinking about the world.