From the magazine: Bad trips

Editor’s note: The Talisman granted subjects in this story anonymity because it discusses their use of psychedelics. Psychedelic drugs have been illegal on both the federal and state level since 1966.

Michael Devyn (not his real name) began to breathe aggressively with a terrified gaze glossing over his eyes, making it clear to his friends this psychedelic trip would be different from the rest. Devyn doubled his usual single dose of an LSD tab that he had been taking for years. Paige Wilson (not her real name), a friend of Devyn who also uses psychedelics, said she witnessed his aggression start to form.

An hour into his trip, Devyn began to feel agitated and paranoid there was a nameless “someone” threatening his life.

“I was banging on doors, screaming ‘I know they’re in there!’ and I still don’t know who I was talking about, but I know I was scared,” Devyn said.

Wilson said she attempted to calm Devyn multiple times, though the calm state only lasted for five-minute spurts. He repeatedly flung his body across floors, punched walls and countertops until his knuckles were covered in multicolor bruises and hurt one of his friends as he flailed his fists at anything he could reach.

“It was terrifying seeing him as this animalistic beast when I know how good of a person he really is,” Wilson said.

During the trip, Devyn came to believe he was bartering with a devil-like demon for his and Wilson’s souls. He felt something he described as evil taking over his thoughts and movements, making him feel like he had no control.

“It was either my soul or hers, and I was preparing myself to give my soul away,” Devyn said.

Psychedelics are a type of hallucinogen that alter perception, thoughts and feelings, according to the National Institute of Drug Abuse. However, they are used by about 24.6 million Americans aged 12 and older or 9.4 percent of the U.S. population, according to NIDA.

Short-term effects of these drugs can include increased blood temperature and panic, while long-term effects can consist of memory loss and anxiety, according to NIDA. Although rare, persistent psychosis, which is a series of consistent mental problems, and hallucinating persisting perceptual disorder (HPPD), in which users experience hallucinations while not under the influence of a hallucinogen, may also occur in heavy users, according to NIDA.

“I knew I wasn’t dead, but it was the closest thing to death I have ever felt,” Devyn said. “I told my friends the next day that I was sorry, and whatever they saw last night was not me.”

Psilocybin is the active hallucinogenic chemical found in magic mushrooms, or shrooms, that induces psychedelic experiences. They are found in specific plants or mushrooms, along with their extracts, and are also made by humans, according to NIDA. 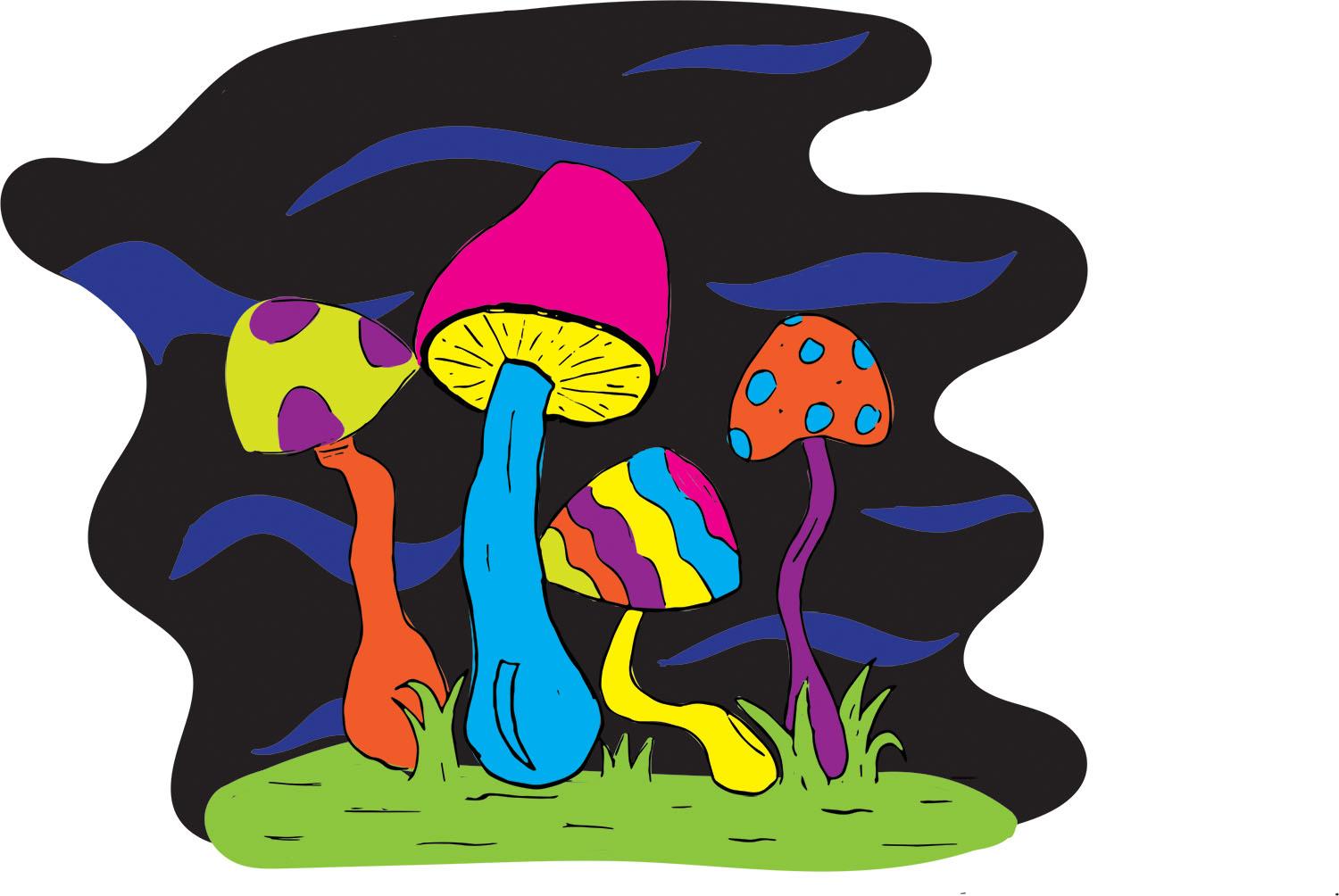 Watching Devyn experience his bad trip didn’t stop Wilson from continuing her own use of psychedelics.

She said witnessing Devyn’s experience reminded her of a bad trip she had experienced with shrooms a year before.

“When I walked outside, I felt the darkness consume me,” Wilson said. “I needed to get out of that situation.”

Wilson began to see glimpses of faces from classic horror movie’s, including “A Nightmare on Elm Street,” “The Grudge” and “Halloween.” The stars she was lying under in her small town of Walton seemed to move to form these pictures. She ran to her room, hoping the familiar place would bring her comfort, but she said the torture followed.

“I laid in bed for four hours after going inside and I was convinced the girl from ‘The Grudge’ was waiting on the other side of the door,” Wilson said. “I didn’t move the entire time.”

Wilson first tried shrooms at 16 with friends and continued to use them for four years.

Wilson said her biggest mistake was taking the psychedelics, by herself. She said in her previous experiences with psychedelics she was in the company of friends who that made her feel loved and cared for.

“If you feel a bad trip start to happen, you need to have people there who you trust to keep you sane,” Wilson said.

About 17 percent of people between the ages of 18 to 25 have used hallucinogens and about nine percent have used LSD, according to NIDA.

Despite the horrific images and feelings Wilson experienced that night, she said she continues to take psychedelics around eight to ten times a year because of her appreciation for the state of mind they can put her in. She said she believes she is her most “wholesome self” because of the positive energy and the connectedness she feels with others while under the influence of the drug.

“I am grateful for my knowledge and experience with psychedelics because my friends know they have someone to come to when they don’t know what to do while on these drugs,” Wilson said.

According to NIDA, hallucinogens such as LSD, psilocybin, peyote, DMT, and ayahuasca can distort a user’s perception of time, motion, colors, sounds and self.

After taking three and a half doses of acid, Chance Ross (not his real name) began to lose his sense of self and reality.

“For about 45 minutes I didn’t know exactly who I was, or really where I was,” Chance Ross said.

Chance Ross went into a gas station and asked for help from workers. He didn’t tell them he was under the influence of a psychedelic. He said he rummaged around the drink machine believing he was in Reno, Nevada, in the ‘80s.

“It brings you to conscious and awareness real quick when being questioned by proper authorities,” Drew Ross said.

Chance Ross has been taking psychedelics for 12 years, although he said he does space out his usage and leaves months in between his trips. He said psychedelics allow him to spend time in introspection, reflecting on who he is as well as on his past, present and future.

Drew Ross has taken psychedelics recreationally and, he said, medically since 2016.

After being pronounced dead for more than 60 seconds following a nearly fatal car accident in 2016, he recovered. During his recovery, he refused the opioids and other medications doctors recommended and took psychedelics instead.

He self-medicated through microdosing, or taking a small fraction of a regular single dose, of psilocybin and marijuana. With two collapsed lungs, he was unable to smoke, so he infused the marijuana with the psilocybin in his tea, which took away the physical pain and kept thoughts of the accident from hindering his mental state.

Drew Ross said he remembers the doctor saying, “If it helps you, it helps you. Just keep it confidential.”

However, Drew Ross has not always had good luck with psychedelics. During a bad trip, Drew Ross once saw repeating mental images of scarring moments in his life and said it felt like a visit with the Ghost of Christmas past. At the end of the trip, he saw a death of his former self, which he described as an “ego death.” This is also known as a loss of sense of self and reality, according to the Frontiers in Human Neuroscience journal.

Ultimately, Chance Ross said it is important to be in a positive state of mind when taking psychedelics because stress and negativity can be enhanced when combined with the drug.

“If you don’t have a sound mind, you’re kind of fucked,” Chance Ross said.