Guests of the Haunted Tour at Cherry Hall started in a classroom where they were introduced to Zeno of Elea, portrayed by Louisville sophomore Abigail Board, a philosophy major. Board used two crowd volunteers and a dry erase board to demonstrate Zeno’s reasoning that motion is an illusion.

“Motion doesn’t exist — it’s a figment of your imagination,” Board said while she was playing Zeno of Elea. 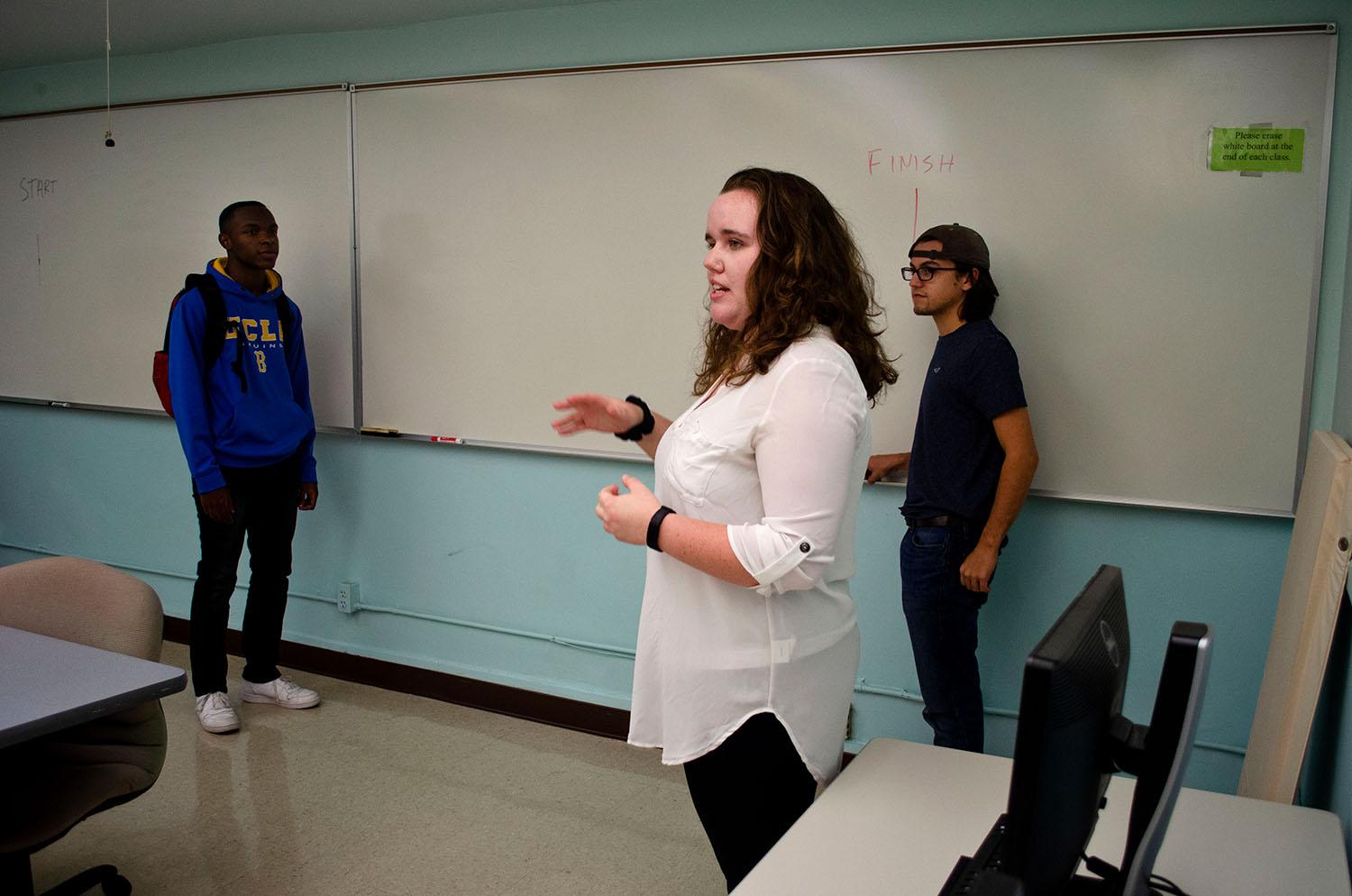 Zeno of Elea, impersonated by Louisville sophomore Abigail Board, speaks on the theory that motion is just an illusion, showing that the concept of infinity is problematic. This is demonstrated by having a student continually split the distance in half from the “start” to the “finish” on the white board, showing that they would never reach the student at the finish.

Audrey L. Anton, an associate professor at WKU, joined forces with staff and students of the Department of Philosophy and Religion on Oct. 28 to revive The Haunted Tour of Cherry Hall after a two-year sabbatical.

Elizabeth Gish, interim chair for the department, joined Anton in passing out candy to students and community members as they waited for the tour to begin through the building.

Students played the ghosts of dead philosophers and possessed the building.

The second stop consisted of Epicurus’s garden, where the ancient Greek philosopher gathered with friends to discuss what he believed to be the greatest good humans should pursue: pleasure.

Draped in a white toga illuminated by flameless candles, Jonathon Howell, a senior from Independence, narrated Epicurus’s logic that pleasure is simply the absence of pain. 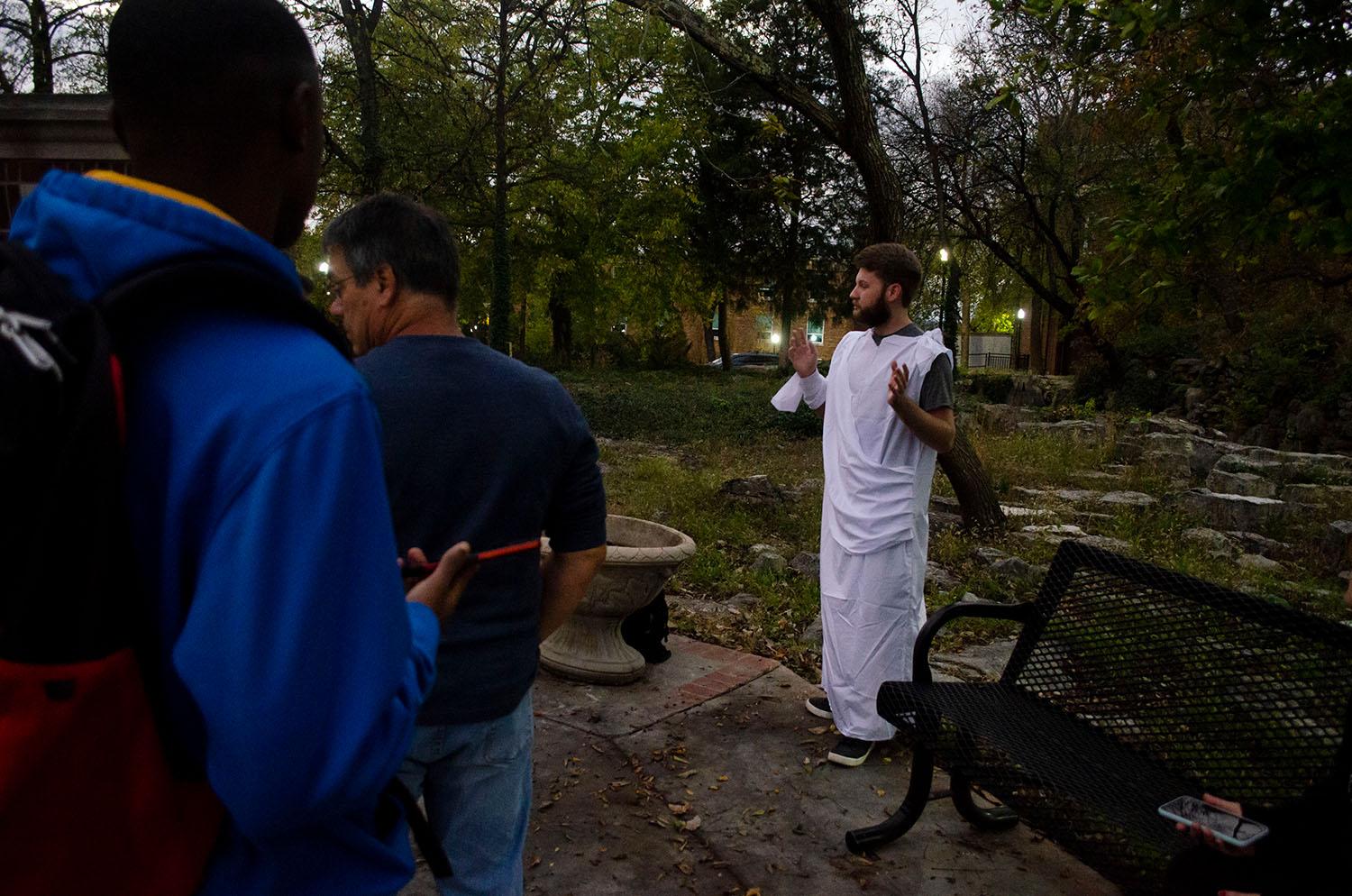 Independence senior Jonathon Howell, portraying Epicurus, speaks on how we don’t need to fear death since we cease to exist once we die.

Howell explained that Epicurus advocated not pursuing all desires or whims, but simple ones.

“Many of those whims can have negative effects on our lives,” Howell said. “Thus, we should have moderation.”

Phillip Kiskaden, a junior from Louisville, played Bertrand Russell while presenting the Barber Paradox while Lindsey Dunn, a senior from Todd County, opted to play Philippa Foot and explain the Trolley Problem.

Kiskaden playing Russell explained Barber Paradox as a barber is someone who shaves only people who do not shave themselves. For example, if a barber lived in a town where he or she is the only barber and everyone had to be clean shaven, he cannot shave himself. The questions is what would he do and there is no right answer. 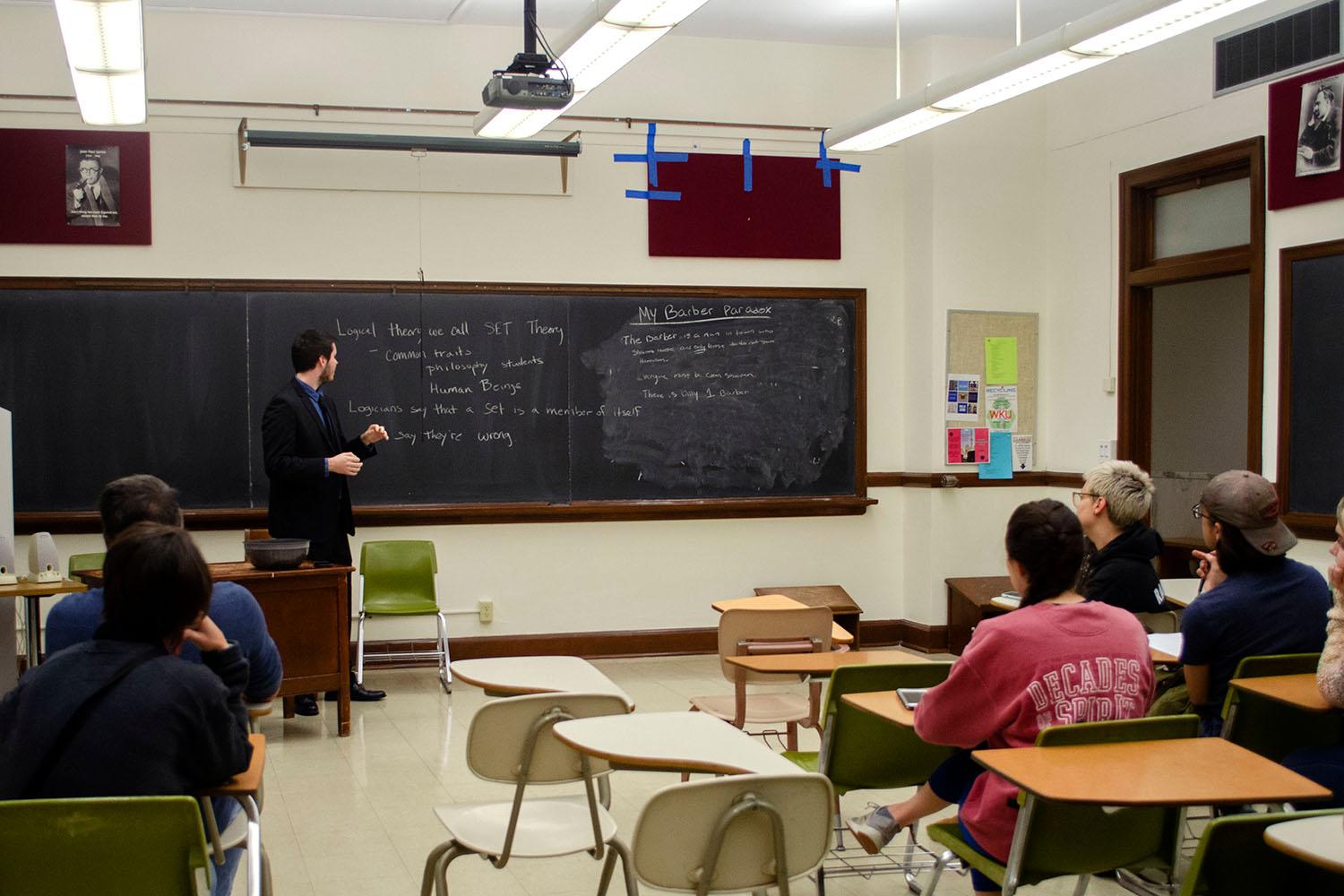 Phillip Kiskaden, a junior from Louisville, explains Bertrand Russell’s Barber Paradox to the group during their time with him.

Dunn explained the Trolley Problem states that people are separated on a moral level by which action they would choose if they we’re driving a trolley that’s brakes gave out. They would have two options, turn the wheel in the direction that would kill five people you do not know or one person you do know.

Seth Jessie, a senior mechanical engineering major from Edmonton attended the event for extra credit and because he finds the topics interesting. Jessie said the Trolley Problem, which Foot used to represent two schools of moral thought, was his favorite stop of the night.

“I am very interested in studying philosophy at some point,” Jessie said. 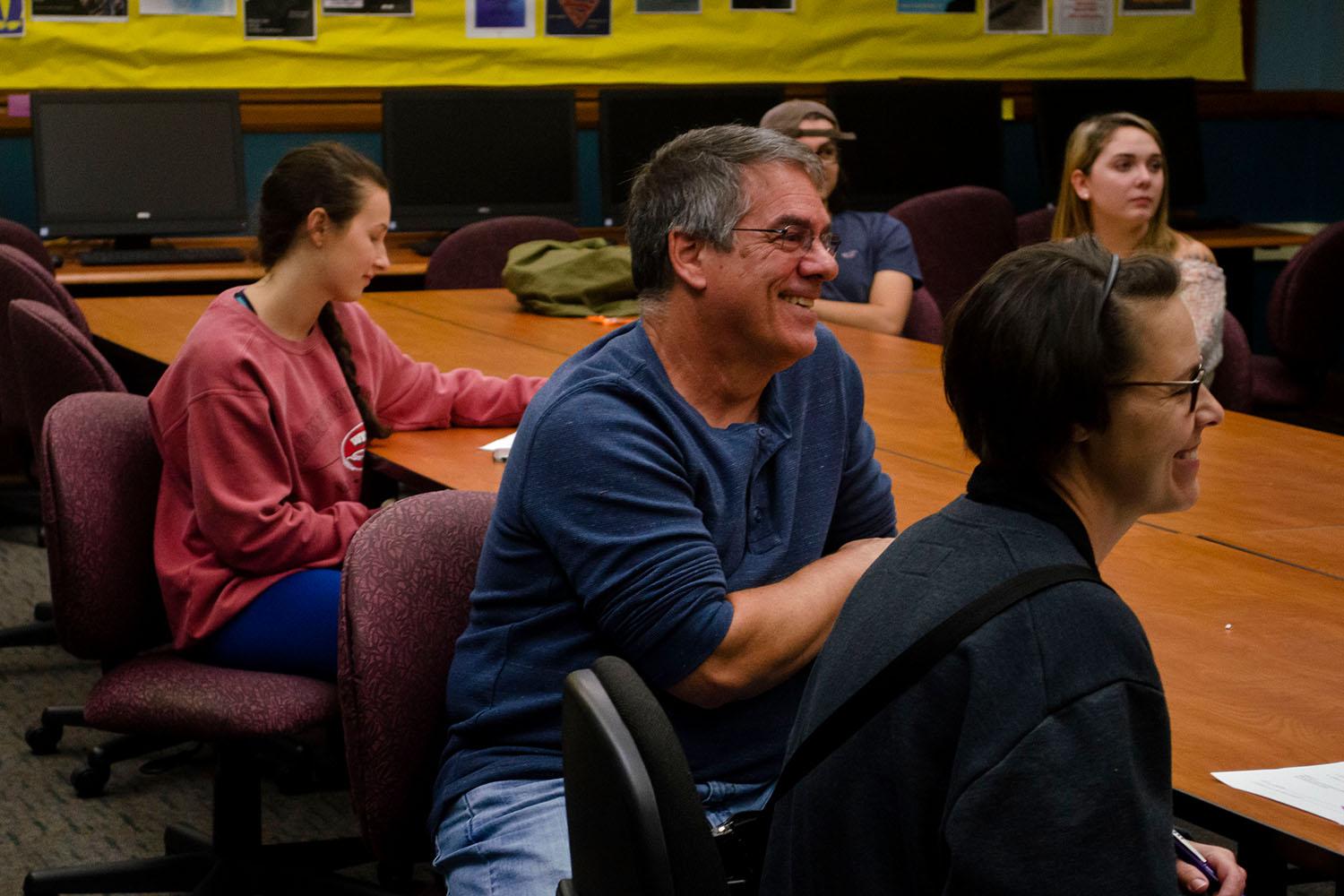 Members of the tour watched a clip from the TV show “The Good Place” to further explain the Trolley Problem.

Senior Anna Catherine Volk, a history major from Owensboro, rounded the event off under the night sky, perched upon the front steps of Cherry as stoic philosopher Seneca The Younger. Volk explained that Seneca believed that nothing is good or bad — it just is.

The haunting of the philosophers along with bowls containing a variety of sweets on every stop made the tour worthwhile for Elise Demers, a sophomore from Nicholasville, providing her with extra credit and a good time. 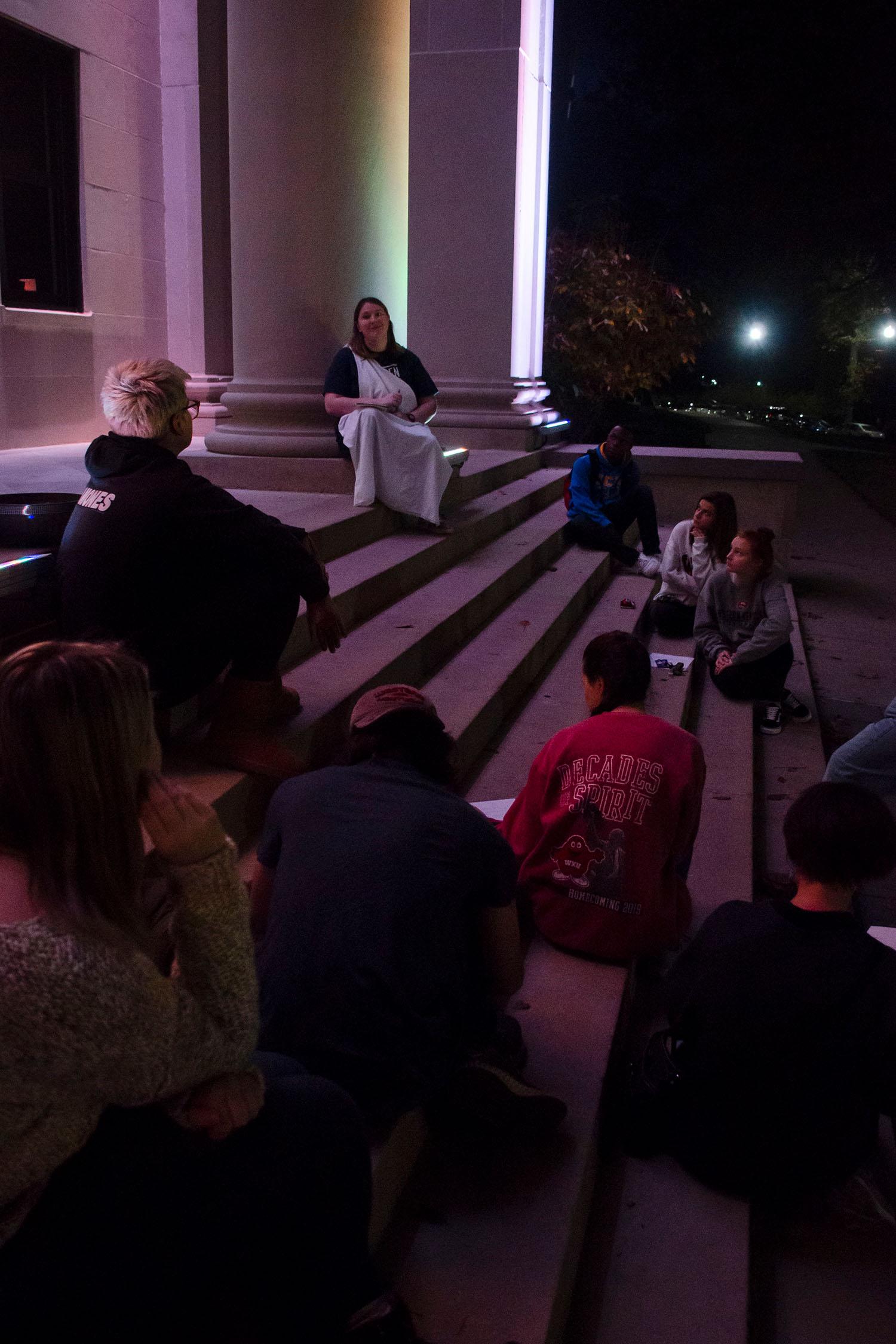 Anna Catherine Volk, senior from Owensboro, discusses Seneca the Younger’s philosophy on the question, “Why do bad things happen to good people?”