Adam Moore, also known by the pseudonym Harold Apples, is a husband, father of two children, and now a Grammy-nominated designer. But before any of that, he was a Kentuckian.

“For Kentucky, it’s like the most underdog state,” Moore said. “I feel like other states look down on Kentucky, but if you’re from here and you ever leave, you realize, then, just how great it is.”

Moore, a WKU alumnus and Louisville native, initially came to Bowling Green in 2000 to obtain his bachelor’s degree in graphic design. After over a decade of moving around the country for work, with Colorado, Texas and Nashville all under his belt, the 37-year-old graphic designer decided to return to Bowling Green. 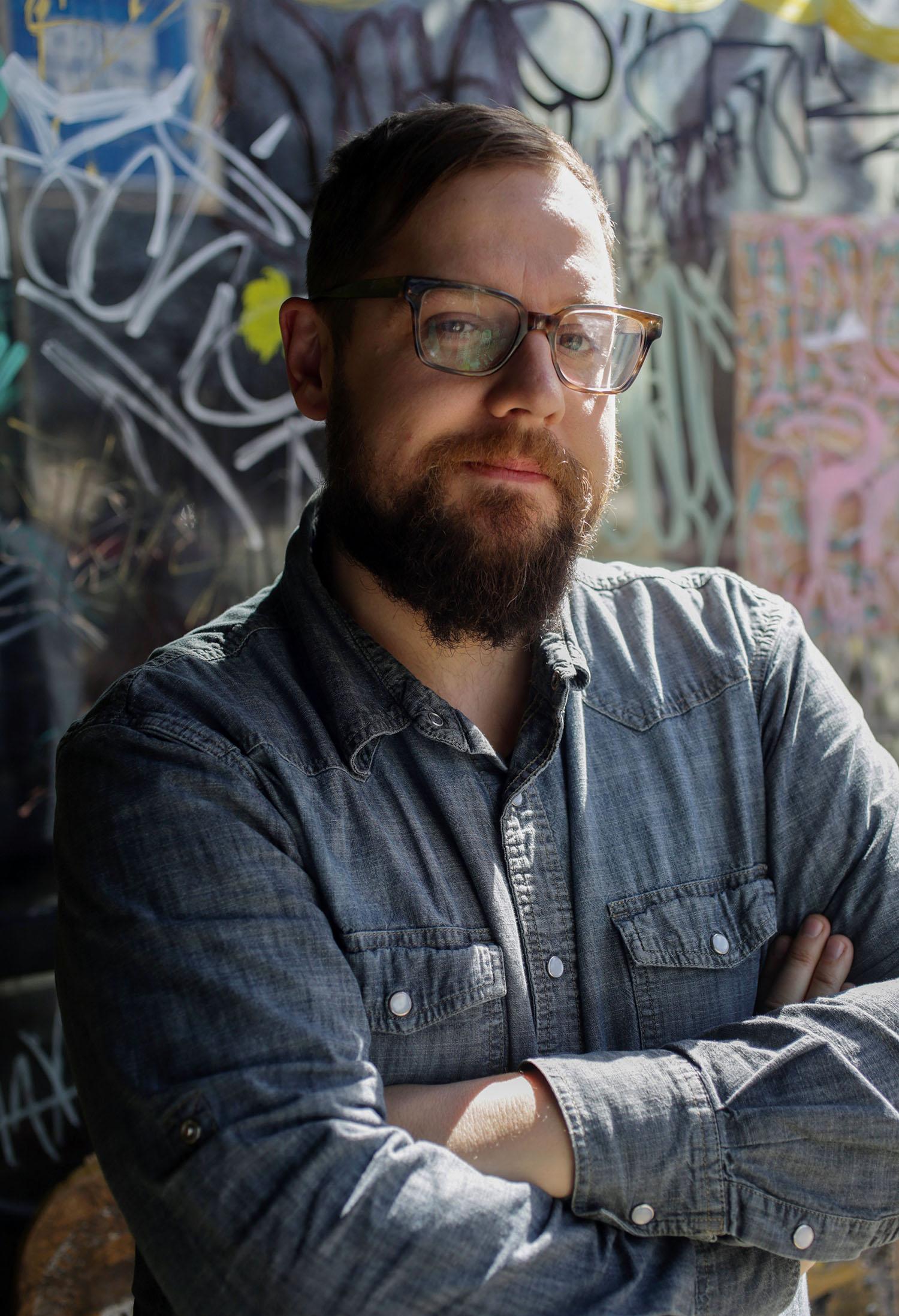 Adam Moore, 37, from Louisville, is a product designer at Eezy and has recently finished branding work for Spencer’s Coffee. He is an alumnus of WKU with a degree in graphic design.

Moore said he takes pride in representing Kentucky wherever he goes, including when he attended the 2019 Grammy Awards on Feb. 10 in Los Angeles as a nominee for album cover art he designed.

“My friend got me this Ebbets Field blue hat with a big KY on it,” Moore said. “I didn’t wear it at the ceremony itself, but I definitely had it on afterwards.”

The Grammy nomination was a surprise for Moore. He had submitted his cover art for Bowling Green band Foxhole’s third album “Well Kept Thing” six months prior to nominations being announced. Moore, who also plays guitar for the band, spoke about what the nomination meant for him.

“This album was kind of our last run together now that we’re all involved in different things and live in different places,” Moore said.

He said it was amazing to be able to make this last album with the band he’s been a part of since 2000, and the nomination for his art was “the nice little cherry on top.”

He has previously held positions at multiple design companies, with a four-year stint as a creative director for travel guide company Lonely Planet preceding his move to Bowling Green. Now, he works as a product designer at design firm Eezy.

Moore said his position as a creative director placed him in a leadership role where there was constantly work on the table. That level of pressure can be stressful for anyone, especially for a husband and father of a 5 year old and an 1 year old.

“Moving back to BG has been more about working for myself,” Moore said.

Moore’s boss at Eezy, founder and CEO Shawn Rubel, said he hired Moore as the company’s first product designer, despite his inexperience in that line of work.

“He was a fantastic designer and creative mind, and I knew he could pick up the skills easily with a bit of time,” Rubel said. “He’s one of the most skilled illustrators I know.”

Along with his position at Eezy, Moore does freelance design work for companies in the Bowling Green area and for clients he’s grown familiar with over the years, including magic company theory11.

“I like to do work for people that I think do cool stuff,” Moore said, talking about the freelance work he does outside of his position at Eezy. “The move to Bowling Green was more about a stable work life to do things that are fun and cool.”

Moore said he loves working within the community and creating designs for local companies.

“I feel like a lot of designers want a ton of clients, but I have a few that are my go-to clients for freelance work and that’s how I like it,” he said.

In his freelance work, Moore has designed a logo set for Stonehouse Farm Market — a local farm that sells its veggies at the Community Farmer’s Market in Bowling Green.

Upon returning to the Bowling Green community, he quickly made his presence known with his work. Moore designed a logo for Spencer’s Coffee in 2018 that can now be found on T-shirts and all over WKU student laptops in the form of stickers.

Justin Shepherd, Moore’s longtime friend and bandmate, owns Spencer’s Coffee and said when he first saw the logo, which he calls the “Spencer’s Badge,” he fully embraced it.

“It was sort of a one-off thing Adam did mainly for fun, but it was so clearly awesome that we decided to print it on all sorts of stuff,” Shepherd said.

Moore is nearly finished with a new set of branding images for Spencer’s Coffee that will be revealed during September and October, the first image appeared on his Instagram Sept. 9.

Shepherd has known Moore since his time at WKU in the early 2000s and said it’s been rewarding to see him grow into the recognized artist he is today.

“I’ve been watching Adam create things for nearly 20 years now, and while it’s always been clear that he’s talented, a lot of talented people don’t get the recognition or success that they deserve,” Shepherd said. “I’m glad he’s been able to succeed with his design and that I’ve gotten to be a part of it.”

Even with the popularity of his designs in Bowling Green, Moore’s design success expands beyond the confines of the city he calls home.

Moore has created Grammy nominated album art,and has done design work for companies big and small across the United States, as well as an Instagram account (@haroldapples) with more than 30,000 followers. Though he’s accomplished a lot in Louisville, on the Hill, in several areas around the country and created an online presence, he hasn’t forgotten the Bluegrass state he came from.

However, he feels that his career is still just beginning.

“I feel like I’ve got a long way to go,” Moore said. “Fifteen years ago, when I was at WKU, looking at myself now I’d consider myself a success. Right now, I think I’m successful but not a success — yet.”