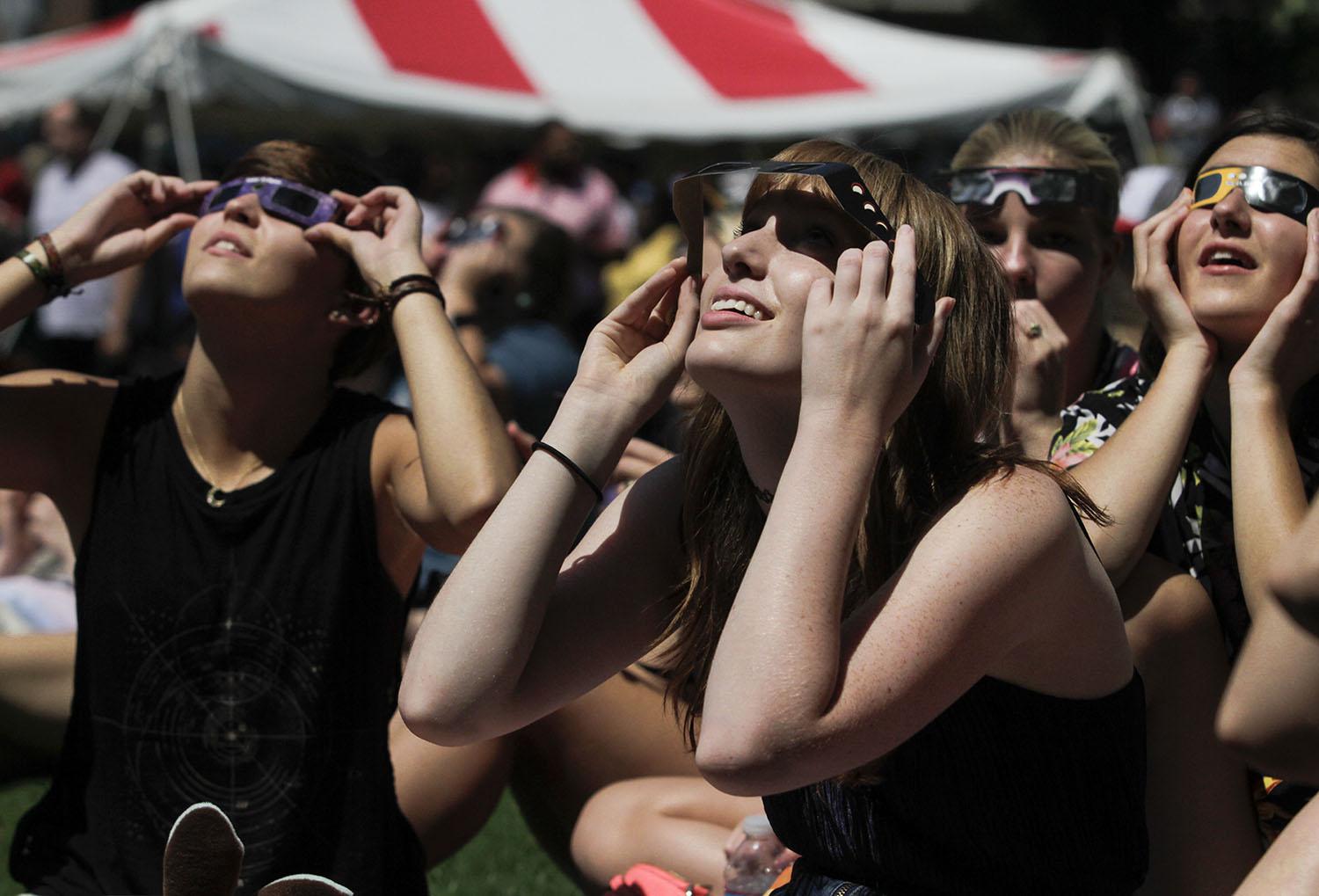 The air around South Lawn was 89 degrees and buzzing with slow-burning anticipation. WKU students lounged on blankets and in lawn chairs waiting for the first moments of a total solar eclipse — the first visible from the contiguous United States since 1979 and the first of its kind spanning from coast-to-coast since 1918.

On Monday, Aug. 21, WKU postponed the start of classes to allow its students and faculty to experience the “Great American Eclipse.” WKU and other community organizations, such as Chaney’s Dairy Barn, hosted events throughout the day for people to experience the event as a community.

Among the activities sponsored by Student Activities were inflatable obstacle courses, laser tag, and a lineup of local bands who performed throughout the day. Bowling Green hip hop duo Waco Bell kicked off the day with a performance in the hour leading to the eclipse’s totality. In addition to their usual lyrics, the group replaced occasional lines with repetitions of the word “eclipse” in rhythm with the beat. 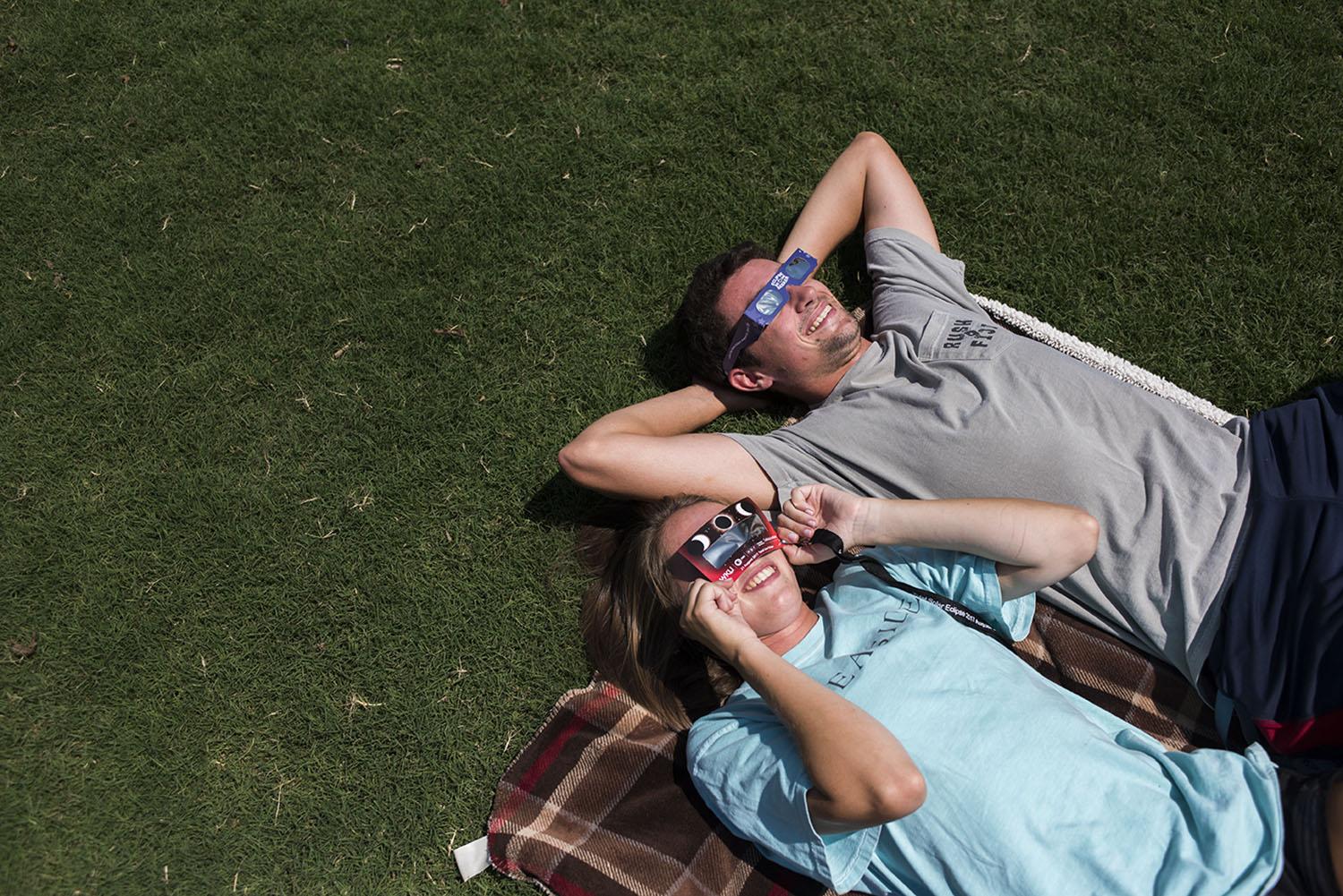 Sophomores Paul Sumner and Olivia Davis relax on South Lawn on Monday, Aug. 21st, viewing the solar eclipse though their eclipse glasses. The total eclipse, which was only viewable from certain areas of the United States, will not happen again in the United States until 2024. (Photo by Nic Huey)

The sound of their mellow bass mingled with booming echoes from the announcer in Smith Stadium, where students from local school districts gathered to maximize their viewing time.

Stragglers wandered around the lawn and glanced occasionally to the sky, their eclipse viewers at the ready. 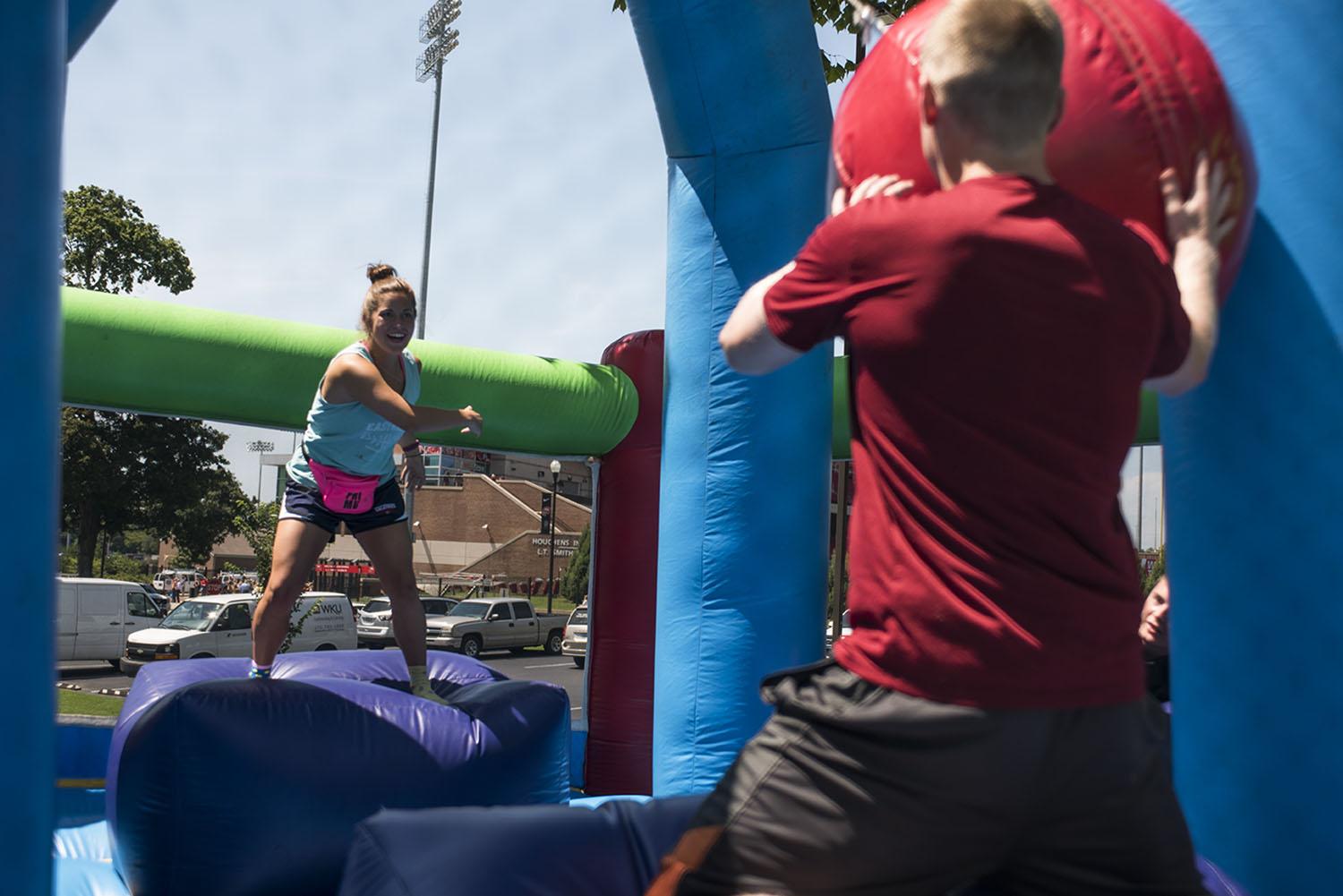 Caitlin Brock, a junior from Louisville, plays in one of the many bounce castles that were featured on WKU’s South Lawn for the Lights Out event, put on by WKU Student Activities. (Photo by Nic Huey)

The clock at Guthrie Bell Tower stuck once to signal the hour.

With 27 minutes to go until totality, the sun looked like a mere crescent. Guests filtered out of the air-conditioned mezzanine of the stadium and into the heat outside, which had become darker in the eclipse’s wake. Among them were Bowling Green community members, WKU alumni and guests from out of town who traveled to witness the event.

Eric Merdian, a senior at Atherton High School, drove two hours to photograph the eclipse. He carried a tripod and a camera body with a solar filter taped to the lens. He said he was most excited to take photos of the eclipse’s totality.

“I’ll actually be able to remove the filter — sort of like you won’t have to look at it through this,” Merdian said, gesturing to the eclipse viewer around my neck. “[The sun will be] completely covered, and you might be able to see the radiation from the sun if you look at it the right way.”

The “radiation” Merdian referred to was the sun’s corona. According to the WKU eclipse website, the sun’s corona is a halo of light rays that emanate from the sun but are normally too faint to see in contrast to the sun itself.

Provost David Lee said WKU was a unique place to experience the eclipse in that it was the only four-year university in Kentucky in the path of totality. Lee viewed the eclipse with his wife and his daughter, who traveled from Cincinnati with a friend.

Lee said it was important for WKU students to have the day off, so they could experience the event as a community.

Many WKU students, including Bardstown sophomore Erika Clark, invited family from out of town to witness the spectacle. Clark was joined by five of her family members including her aunt and young cousins.

Clark said witnessing the eclipse at WKU was special because of the opportunity for the community to come together to share the experience. 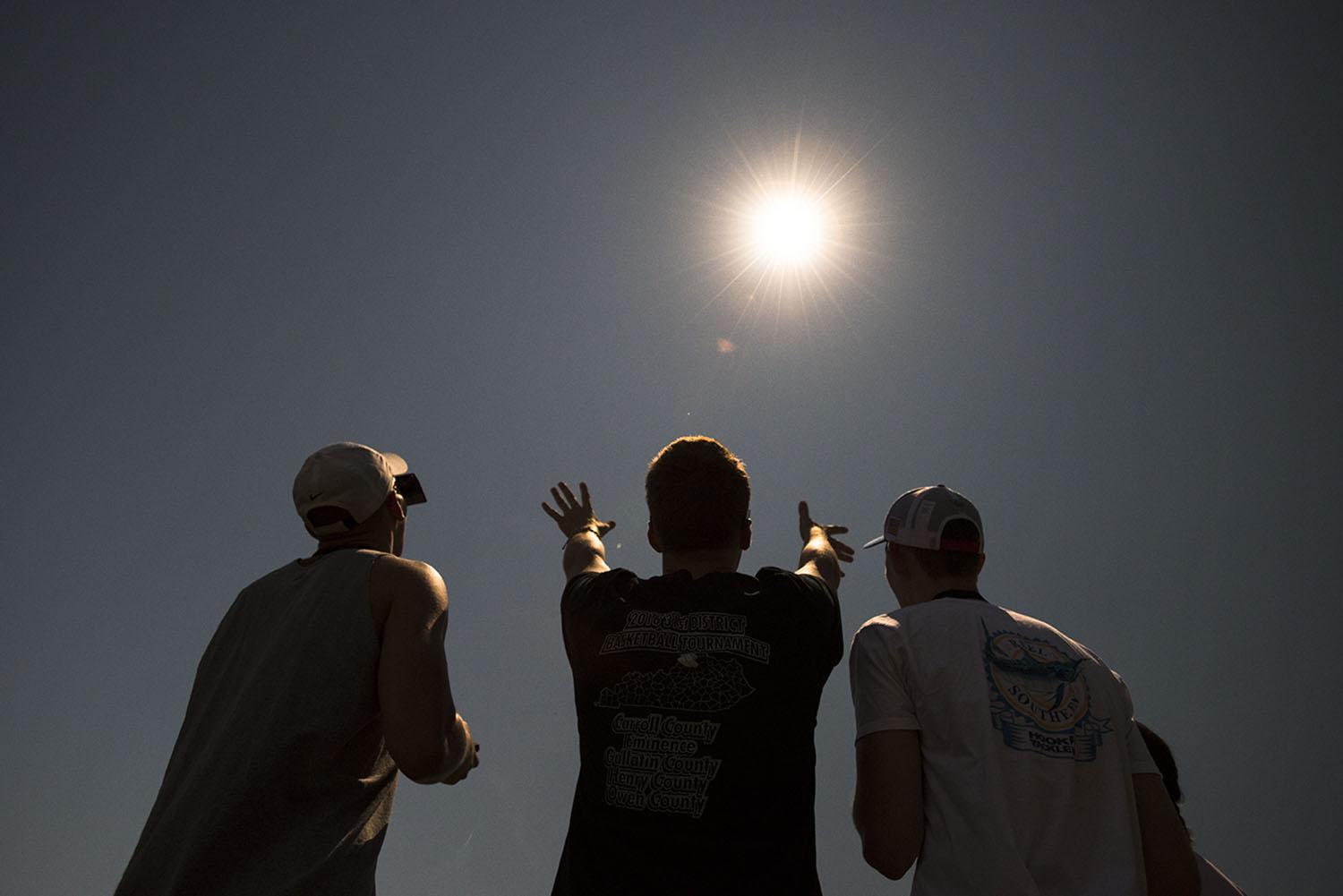 Luke Adkins, Patrick Osborne, and Riley Montague view the total solar eclipse from South Lawn on Aug. 21st. The eclipse, which occurs when the moon passes in front the sun, lasted 57 seconds in Bowling Green, Kentucky. (Photo by Nic Huey)

As the eclipse neared totality, the moon began to edge itself over the last visible surface of the sun, creating the effect of a 360-degree sunset on the horizon. A cheer rang throughout the campus, echoing from South Lawn to the stadium. The temperature dropped as the lawn was plunged into total darkness, and insects began to chirp. The audience dropped their glasses to witness totality with the naked eye.

The cheers and expressions of awe lasted roughly 57 seconds before the emcee at the stadium instructed everyone to reposition their solar viewers.

Afterwards, a group of students on South Lawn described the experience as “surreal … like a sci-fi movie.” The group was still buzzing with excitement, rehashing the event and finishing one another’s sentences.

“The moon blocked out the sun —”

Among them was Atlanta sophomore Savannah Russ, who said she felt it was special to experience the eclipse at WKU.

“We could have gone anywhere else, but Bowling Green just happened to have it,” Russ said. “You feel lucky.”