Europes and Downs: Ages apart but one in the same

Europes and Downs is a travel column by Talisman writer Hayley Robb. Hayley is currently studying abroad with the Council on International Educational Exchange. She will study in three countries for six weeks each through the spring semester. Follow her column all semester as she travels to Rome, Madrid and London. 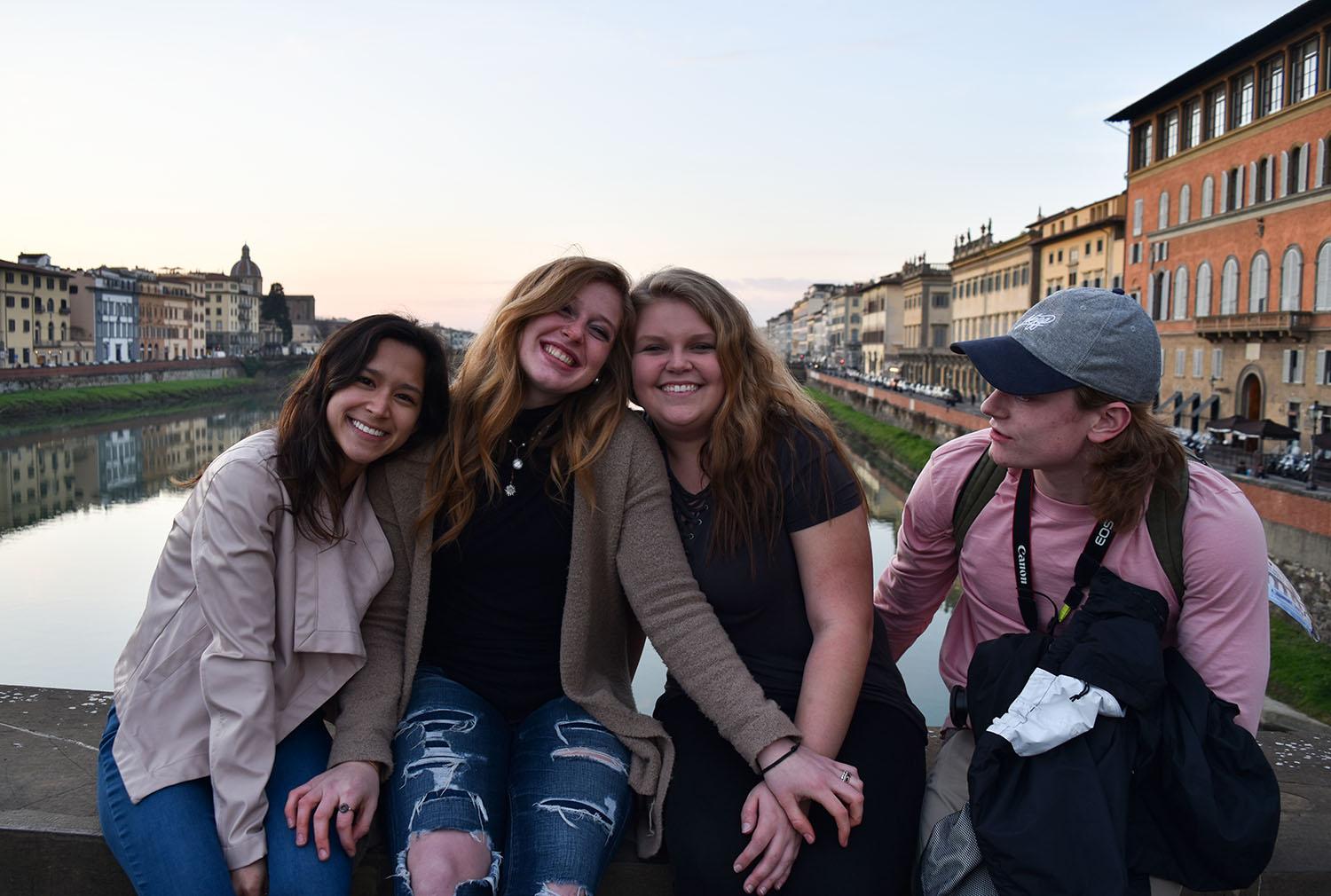 Bella (left) is from the University of Tampa but has Italian roots with her Dad being born here. Maddie (right) is from Virginia Beach, Virginia, and Brady (far right) is from Vermont, the land of maple syrup. Each of them remind me of home in their own individual ways.

The modern word “capital” derives from the Latin word “capitalis,” meaning “of the head.” Rome was founded on two hills, one of which was named Capitolium, also known as Capitoline Hill. From these two words comes ours — “capital.” It is a word Americans use today to identify the political center of a state, country or region.

Capitoline Hill came to house one of the most important temples in all of Rome, and it eventually became the political center of the growing city. This sounds familiar to a place we all know well: Washington, D.C., which has a district known as Capitol Hill.

I am enrolled in an art, architecture and ancient Roman history course that has revealed much more than just the fundamentals of the past. I have seen parallels in the way life was a thousand years ago in the Mediterranean to the way American life is now, an entire ocean and millenium away. 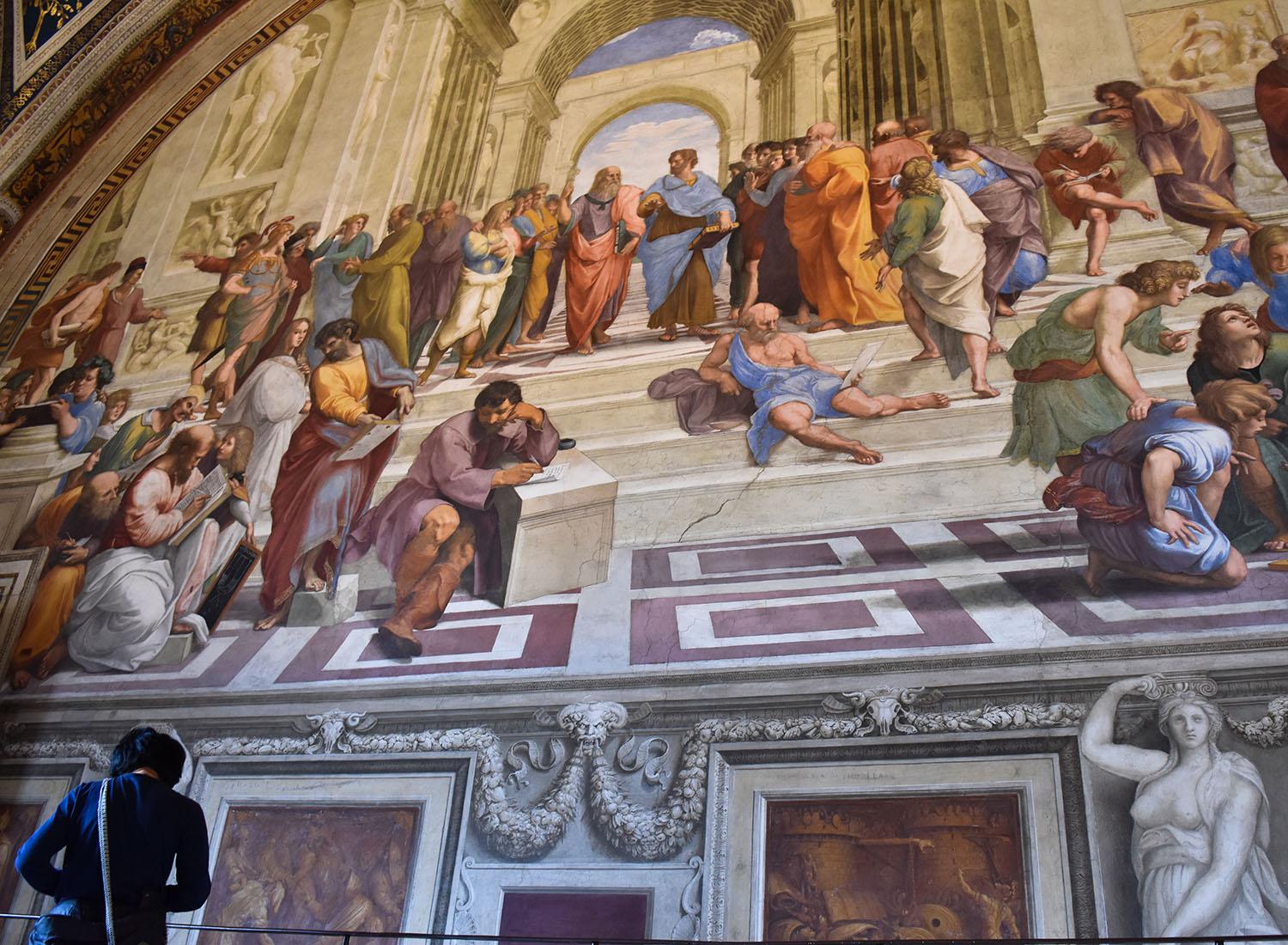 The moment I saw the infamous “School of Athens” painting by Raphael was so surreal to me I had to ask my teacher, “Is this really the original painting?” He responded with: “Yes, isn’t it amazing? You could reach out and touch it if you wanted to.” I have only seen this painting in textbooks, but I’ve learned about it over and over in art courses, and here I was standing right in front of it in the Vatican in complete awe.

Life in Rome started in a valley between two hills. The first thing established was a forum — a public meeting place where decisions could be made and the public could gather. These palazzas, squares and piazzas still exist all over the world today. They exist in Bowling Green, Kentucky; they exist in Florence, Italy; and they existed in 800 B.C.

Social life and hierarchy were established from the very beginning. From there, urbanization was sparked as in any country’s historical record. Urbanization was the key to growth. The ancient Romans’ growth turned into imperial power, civil wars and tension between the classes — a theme Americans have seen in the past and are still seeing today.

Factions still exist. Modern factions still divide people by ethnicity, religion and social class. These problems are ancient, but they are ongoing. And they are universal, no matter where you are. 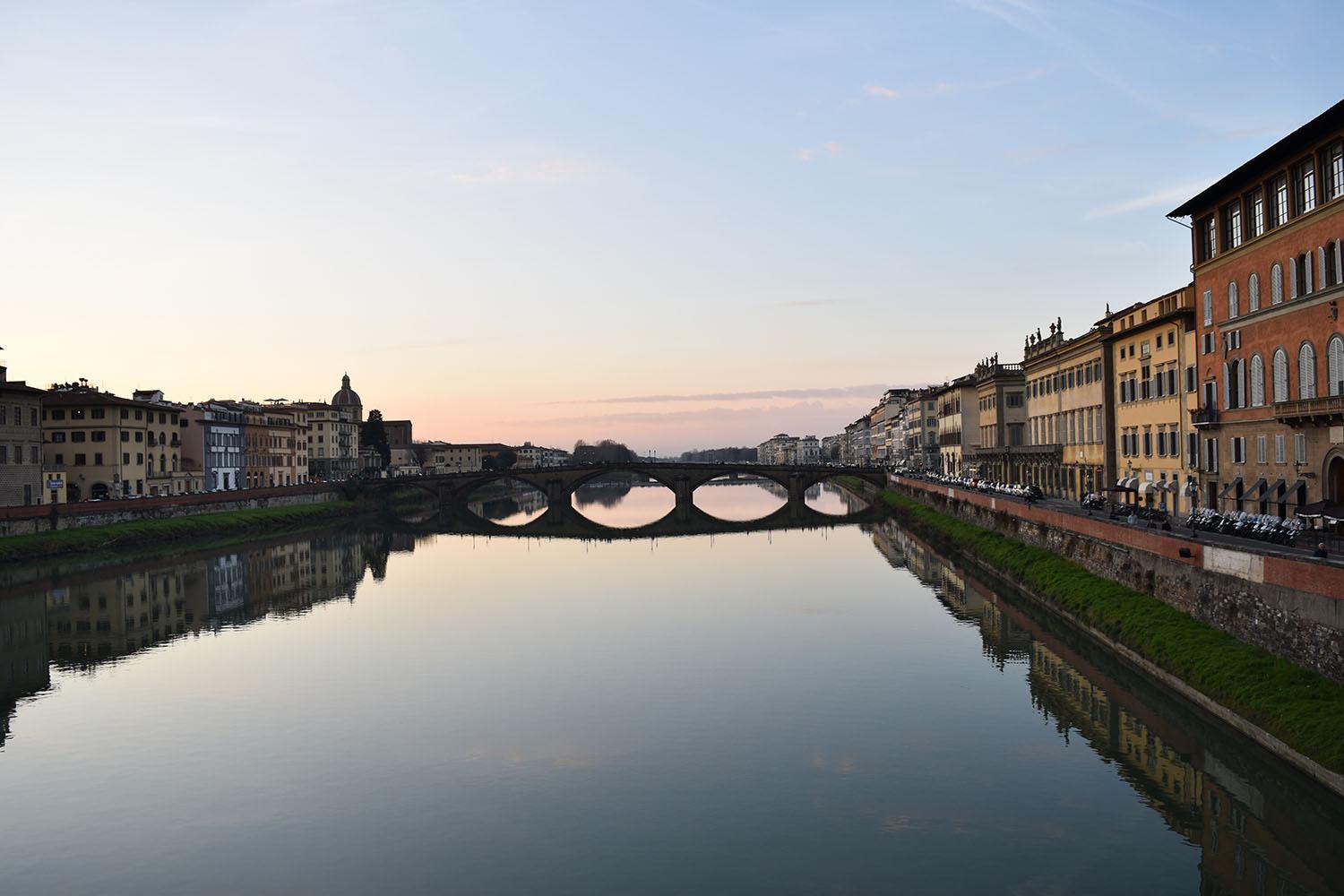 I watched the sunset go over the Arno River that flows through Florence, and in that moment with people I didn’t know even existed four weeks ago, I knew I was where I was supposed to be.

I. Coffee and cigarettes

Since I have been in Rome, I have realized there is a smell burned into the air here. It is of sweet, lingering coffee grounds mixed with bitter, overwhelming cigarette smoke.

The coffee shops are run by families who take pride in each individual cup’s taste, rather than taking advantage of their customer’s addiction to caffeine and making it as cheaply as possible. The employees, usually of the same family, work from open to close, day in and day out, baking the same recipes.

The natives pass by, chatting with friends or acquaintances on the street, with a cigarette between their fingers. It’s as if everyone knows someone here. With a population of 2.8 million, how is that even possible?

I guess it’s not that different if you think about WKU. Einstein Bros. Bagels’ line always seems to be out the door at 10 a.m. on Monday morning. The smell coming off a student’s breath is either coffee or cigarette smoke. As a freshman at WKU, that was the first thing I noticed — the informality of cigarettes and the coffee culture surrounding the college campus.

After my daily cup of coffee, I pass by a movie theater every day on my way to class. The billboard that outshines every other sign in the square is for “The Post” with Meryl Streep and Tom Hanks. Would that be in Italian or English? I may have to find out for myself one of these days. 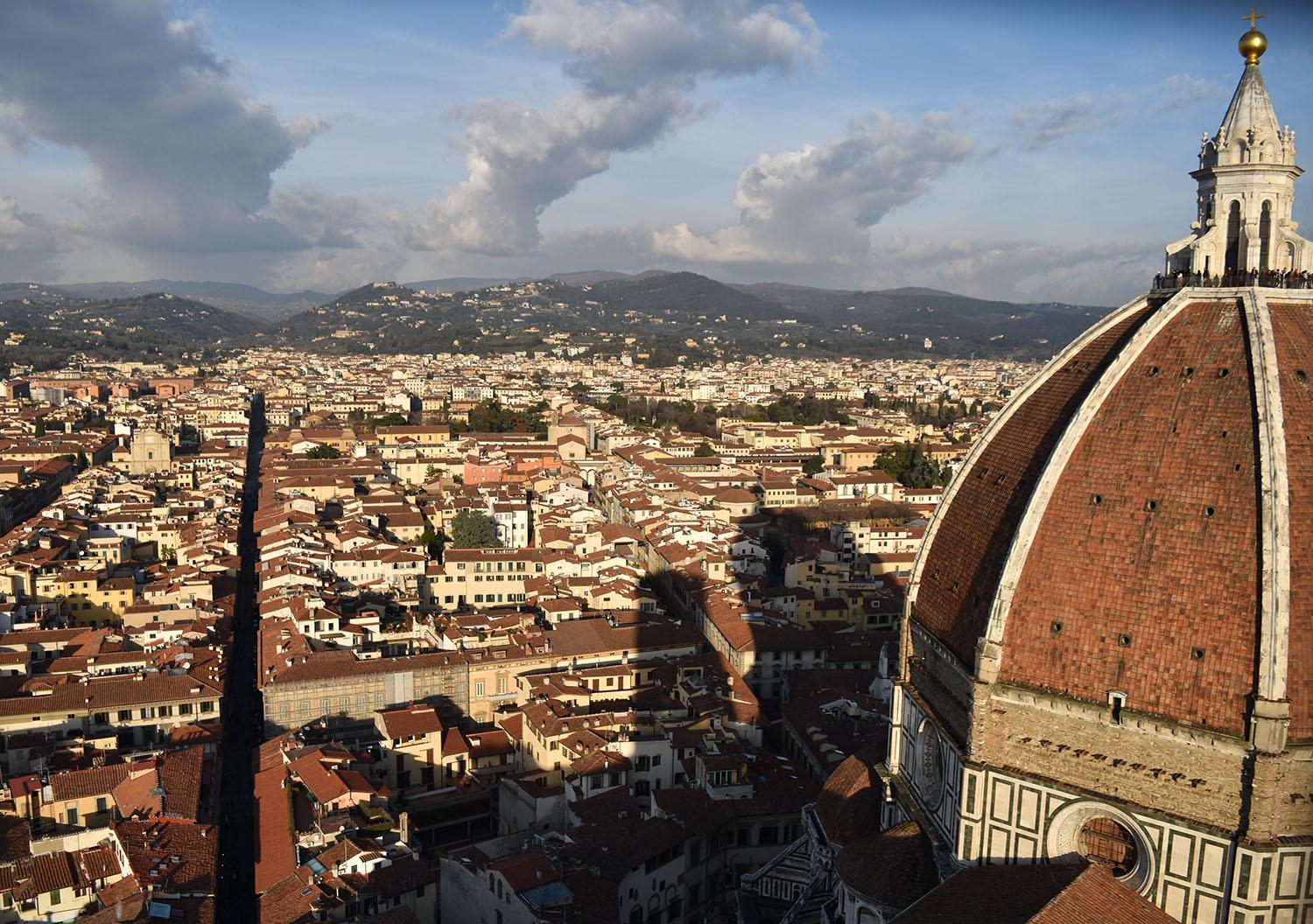 I climbed 414 steps to see the city of Florence, home to some of the best creative geniuses of the Renaissance, in its entirety. Belvedere – “beautiful view!”

I recently took a day trip to Florence, the Renaissance art capital of the world and home to some of the most famous creatives to ever live. I stood with cold chills running down my arms and stared at the Statue of David that was once a block of white marble for Michelangelo. I climbed 414 steps to see Florence in its entirety and watched the sun disappear in the sky from the Piazzale Michelangelo. I saw some of the largest wonders in the world and somehow managed to meet two American couples who studied abroad almost 50 years ago and were reliving the memories made by traveling “while they still could.”

They approached us with slow, hesitant Italian to ask directions to the Statue of David. We cut them off and immediately asked “American?!” We should’ve known from the USA toboggan one of the men was wearing but still asked hopefully anyway. 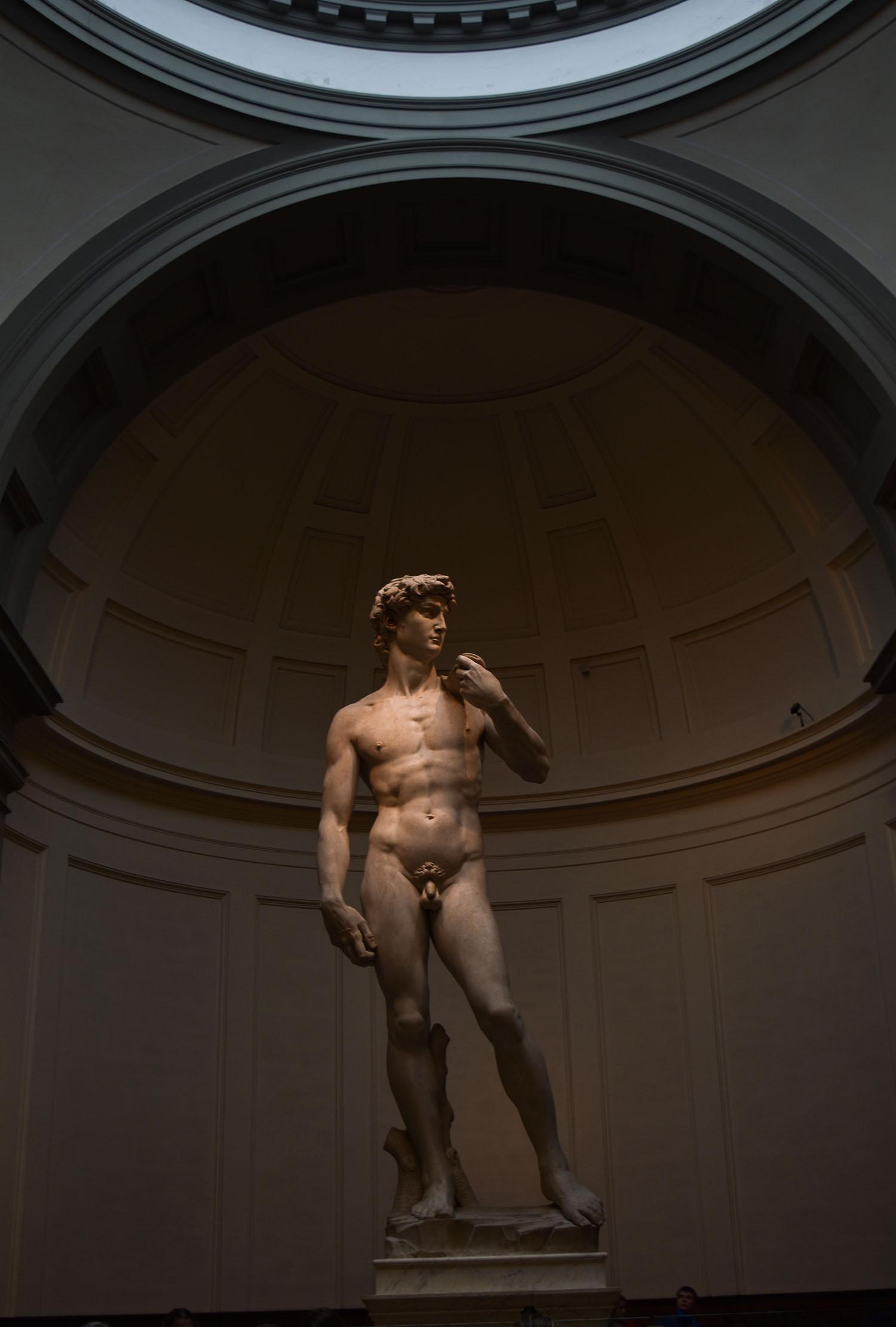 The infamous Statue of David was just as amazing as it is described. I felt chills run up and down my body when I saw the lights fall on the marble.

I don’t think I’ve ever been so excited to meet another person from America in my life. I claim that the Fourth of July is my favorite holiday, but I had never shown so much pride for my country until that moment. It’s incredible to think that a nationality can bond people so instantly. But we knew from the very beginning that these were our people. None of us felt lost in that moment.

We informed the four of them we were also searching for the Galleria dell’Accademia and had cellular data for Google Maps to back us up. I then began leading a group of eight people through the streets of Florence, much wider and cleaner than those in Rome.

Before descending on our journey, they asked us what we were doing in Italy. When they learned we were studying in Rome, their faces lit up. They talked of their times abroad and one couple even told us of their first year of marriage when they just took off to explore all of Europe. They told us it would be an experience that would change who we were as people and would make a lasting impression on our lives. They told us we’d create friendships that would last forever with people I didn’t even know existed four weeks earlier. They told us it was an amazing opportunity that we’d appreciate so much more later on in our lives.

Listening to the couples talk of their time abroad and how they reflect on it now proved to me that I was doing what I was supposed to be doing. I found a mirror image in that moment. It was a feeling similar to deja vu — not that it had happened before but as if it was meant to happen. We followed our new group around the whole day. It was a glimpse of home in the unknown for us. I think they liked living through our brand new adventures too.

This idea of groups forming is essential to any new society. It’s natural to find people who are similar to you. It’s how we create relationships, friendships, clubs, sports and committees. It is a natural way of life that the Ancient Romans established within the original walls of Rome. It’s what we found in our fellow Americans of Florence. 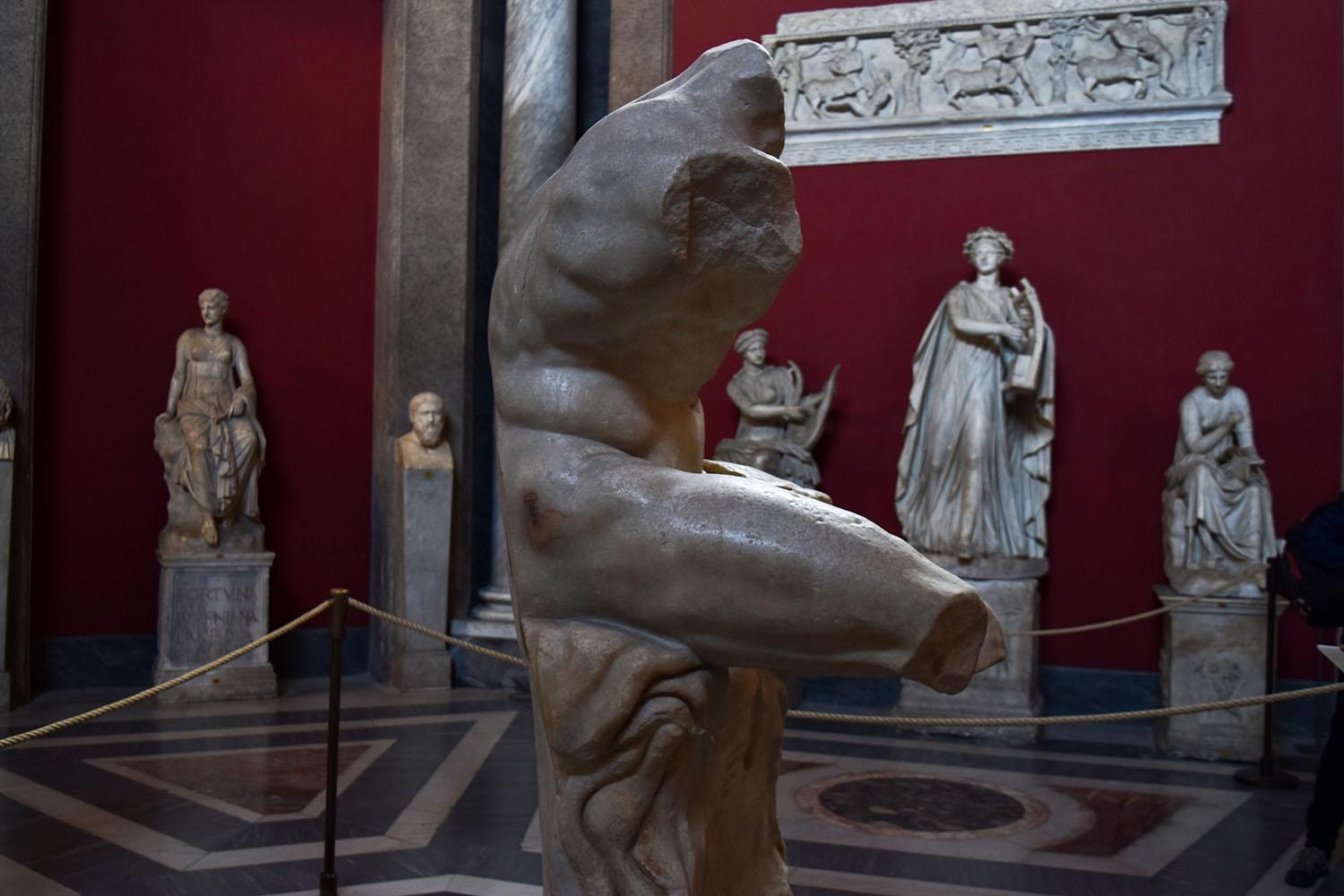 The “Belvedere Torso” is one of the most famous statues in the Vatican museum because it has inspired other statues like the “The Thinker” and sculptors like Michelangelo, himself.

I experienced this same phenomenon when I was looking for a gym and even looking for people to bond with. I was obviously looking for someone who would understand my lifestyle and have a similar one. Along the way, I have found people who love fitness just as much as I do, and I have also invited new people into this world of mine.

I led a makeshift group fitness class in Rome’s Circus Maximus park one Sunday afternoon. It was 60 degree weather, and I was in a tank top training other students from the program. It was a parallel to home for me. I felt like I was leading my functional bootcamp class at WKU all over again, and as I looked around me at all the people out running, walking their dogs or just enjoying the beautiful weather, I found that same feeling that I had in Florence. Although there are groupings of people with different backgrounds, interests and cultures, there are similarities among us all.

I noticed a final parallel after visiting the Vatican on Monday afternoon. It was hard enough for me to grasp that I was essentially entering another country within a country but then I saw the papal ceilings, the Renaissance artwork and the Sistine Chapel. I couldn’t fathom what I was actually experiencing. 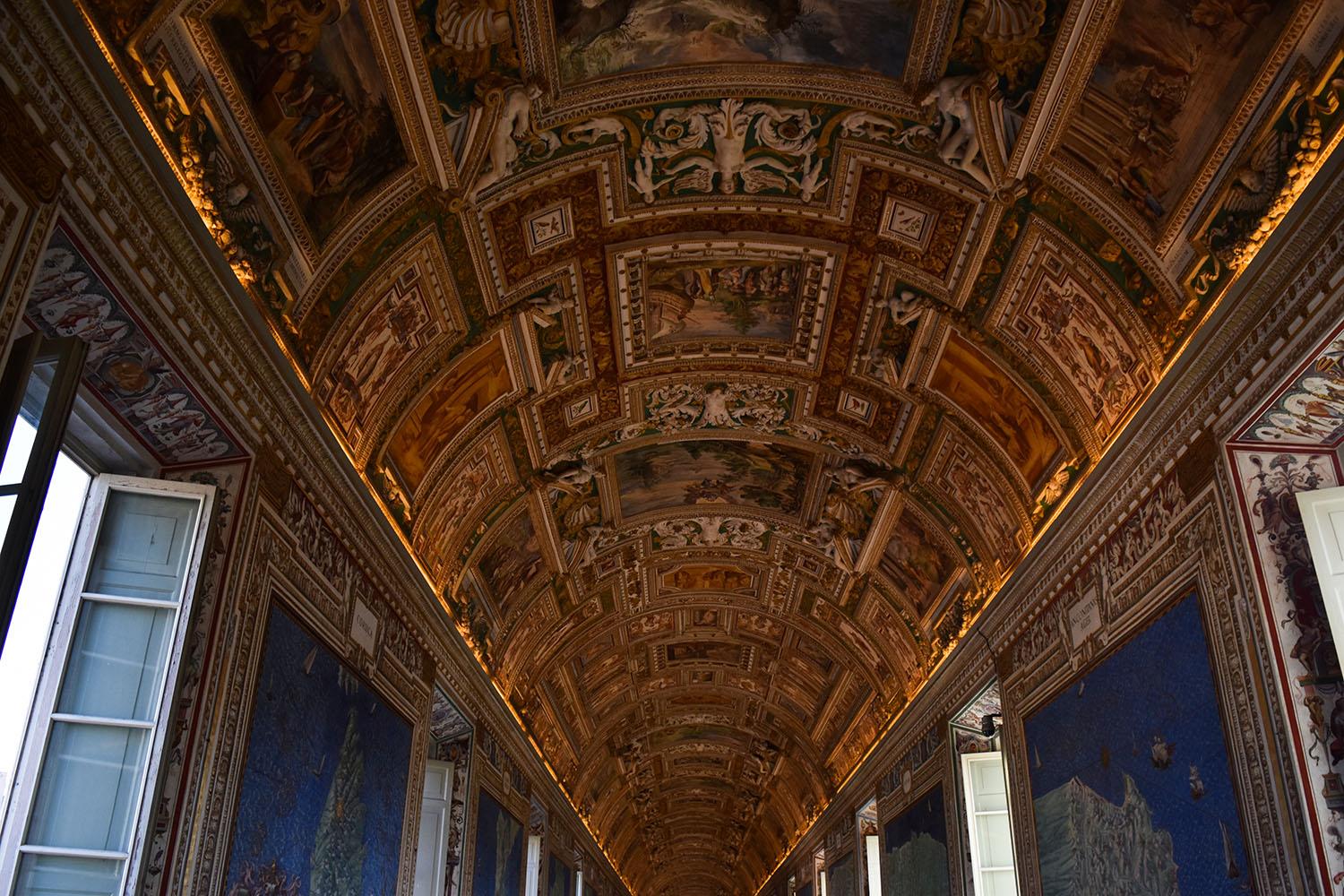 This is one of the beautiful gold ceilings of the Papal rooms to get to the Sistine Chapel.

I stood in front of the School of Athens, a painting I had read about countless times in elementary school arts and humanities classes. I saw legacies of artists and thinkers that made me question what could ever surpass a name that had painted part of the Sistine Chapel walls.

When I entered into the silent, crowded room of the Sistine Chapel, not allowed to say a single word or take a picture to remember the view, I was forced to throw my head back and just take it all in. With my neck strained staring directly above me, the images flashing before my eyes could remain only in my memory. The vivid colors and the massive “Last Judgement” fresco at the very front of the chapel set the tone for the entire room. I didn’t think anything could stun me more until I let my eyes drift away from the vibrancy of the artwork and saw a room full of people from all over the world standing and admiring the work of one man. 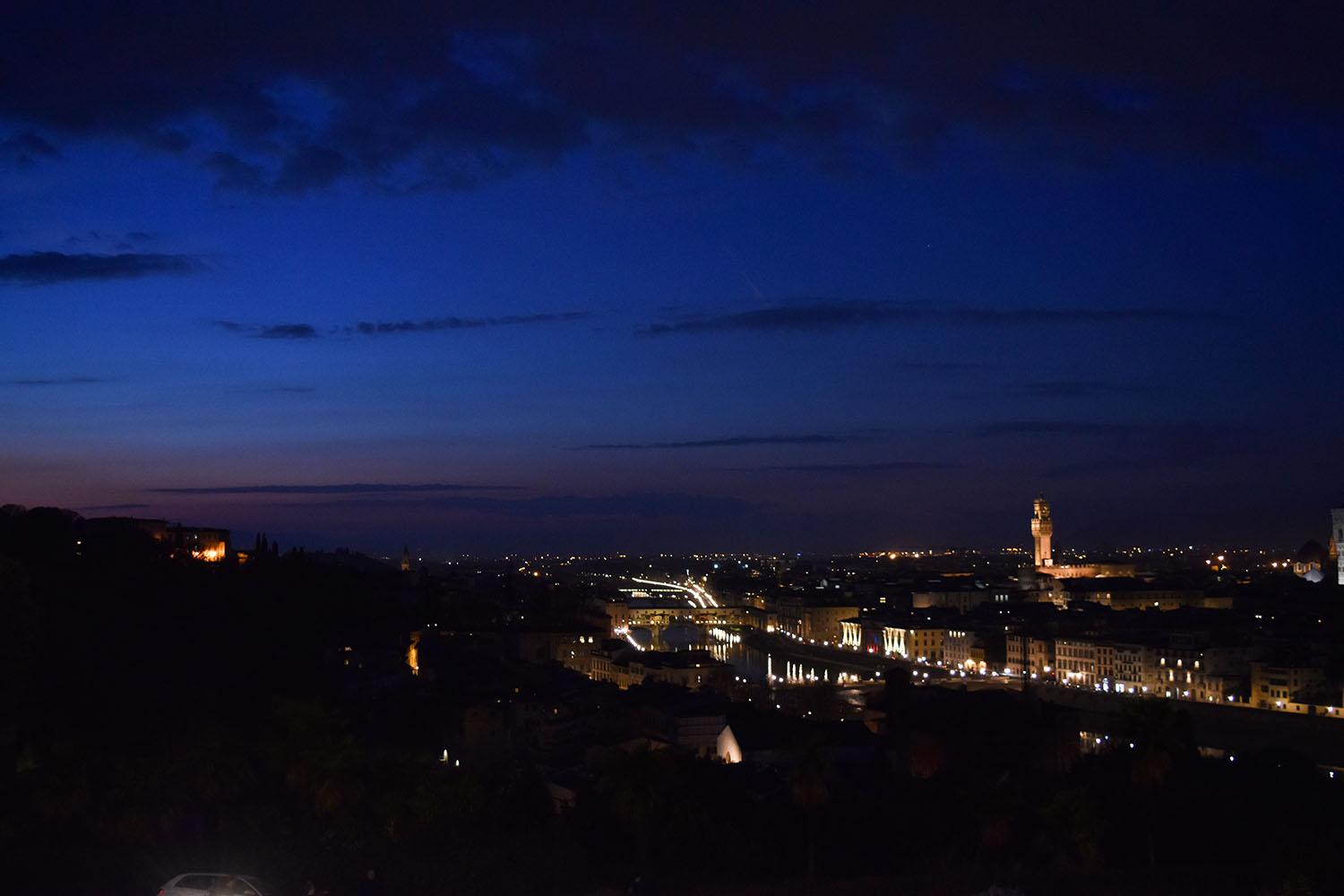 Our day ended at the Piazzale Michelangelo where you can see all of Florence reflecting off of the river and gleaming in the city’s lights.

The connections to the past in this world are what keep us going straight. They keep us moving forward — changing but never truly letting go of the past.