Lights dimmed and the Downing Student Union auditorium’s red curtain drew away to reveal a stage with 11 people, some sitting on furniture, others nearby on the center stage floor.

On the night of April 16, First Things First: Your Story, Your Words transformed the DSU auditorium into a space for current and former WKU students to share personal stories and experiences through creative works.

“We wanted to raise awareness for these very real issues,” said Jessica Folk, a creative writing professor assisting with the event. “If only one person takes something away from tonight, then it was a success.”

The pieces performed ranged in topic from experiences with sexual assault to gender identity, race, femininity, body image and more. 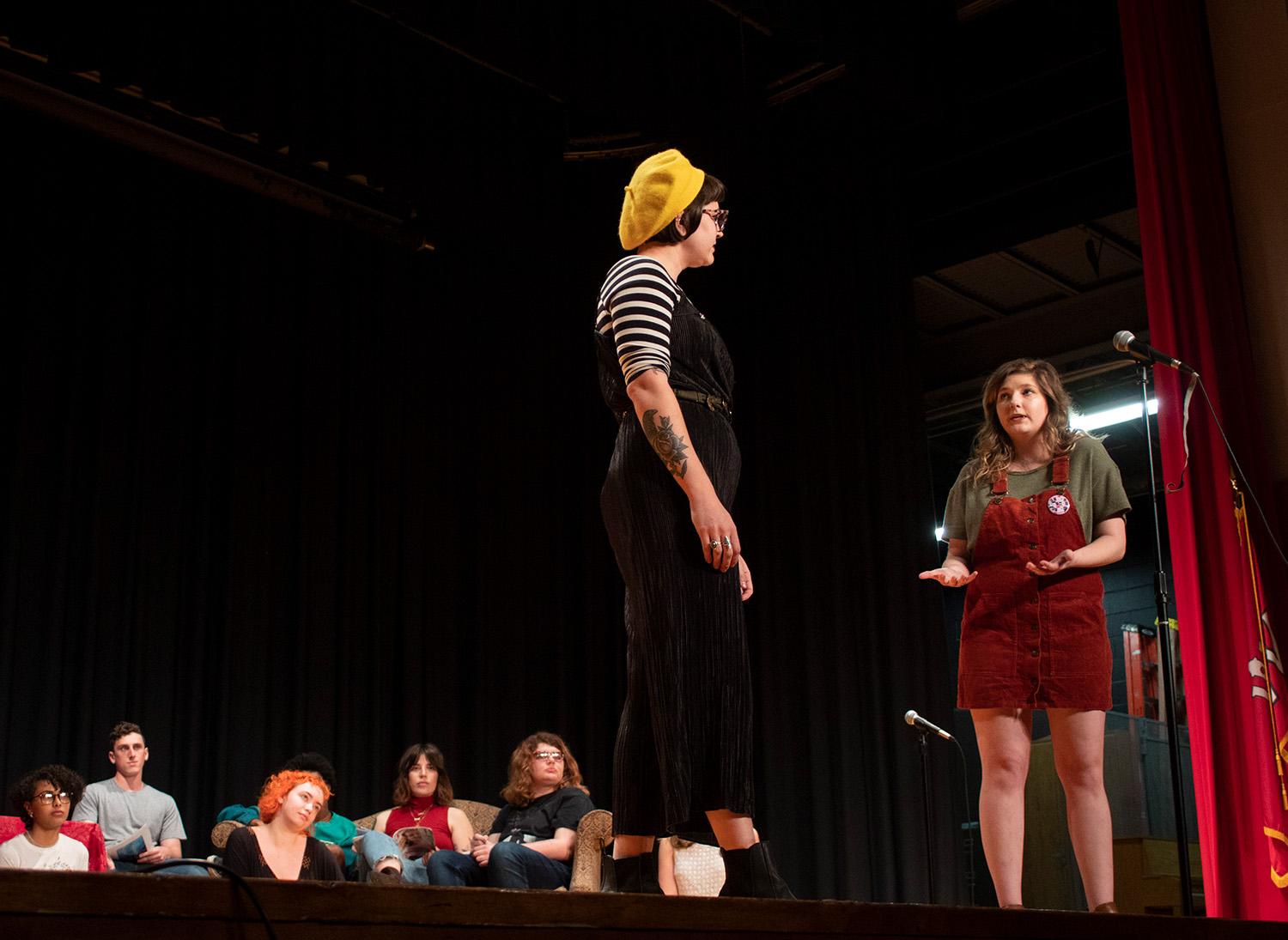 Held as part of Sexual Assault Prevention Month, the event tickets were $7 and used as a fundraiser for Hope Harbor, a local non-profit that provides free counseling and advocacy services to anyone who experiences sexual trauma.

“It was an opportunity to get my poetry out there and spread the word about sexual assault awareness, femininity and womanhood,” Raley said.

She said her first poem “Gardenia” sends a message of social empowerment and protest against oppressive governmental systems. 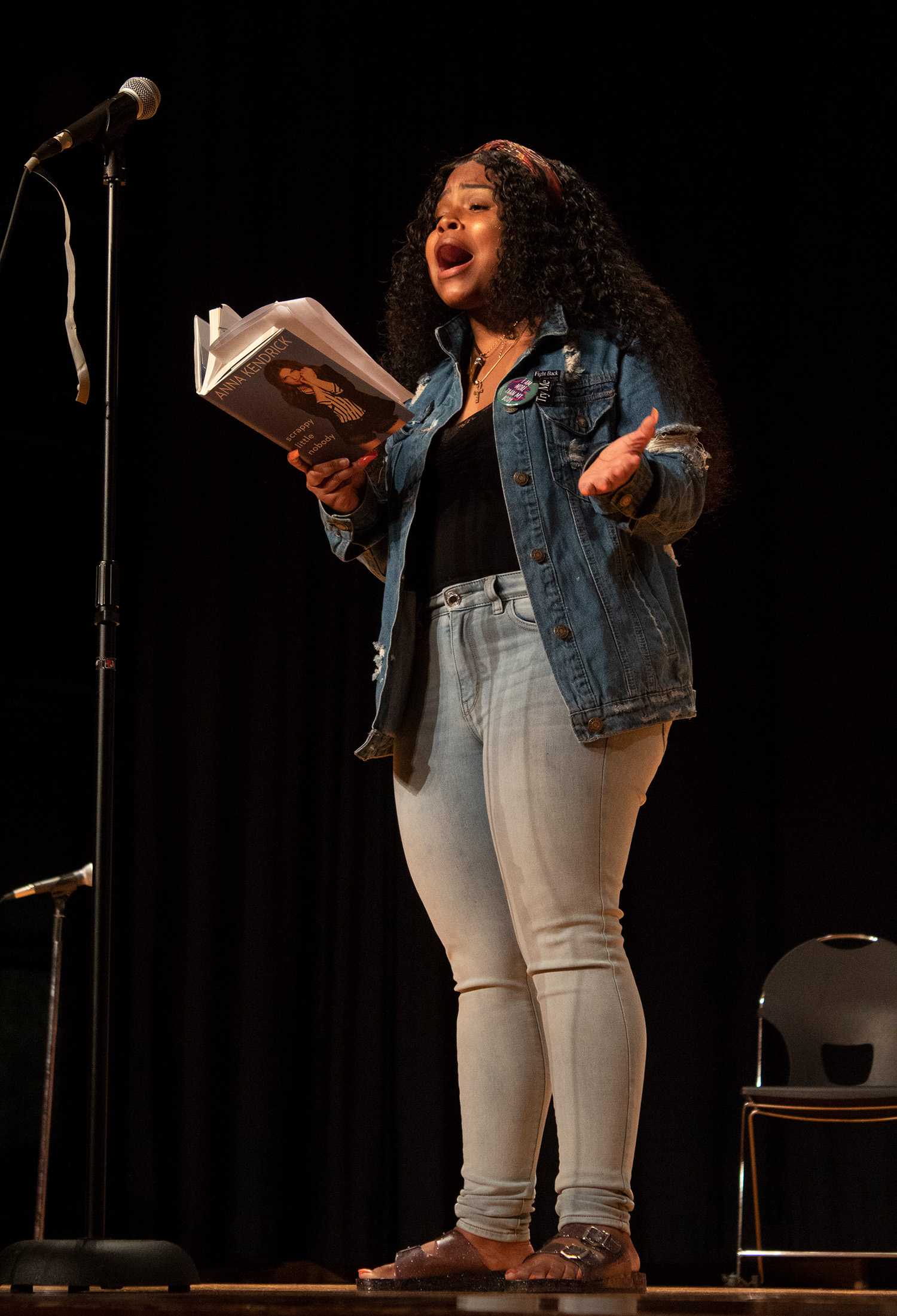 T.L Scott performs her written piece “Just Like My Momma” during First Things First on April 16 in the DSU Auditorium. Students performed written pieces focusing on the topics of identity, gender and sexual assault.

Raley performed portions of another poem titled “Rain,” which is 15 minutes in its entirety. She wrote it in response to the testimony of Christine Blasey Ford against Brett Kavanaugh at his confirmation hearing for the Supreme Court.

“They’re both kind of political pieces,” Raley said. “‘Rain’ is more about feminine identity —  finding yourself and who you’re meant to be.”

Kaliegh Averdick, another performer, is a WKU alumna and Hope Harbor advocate, a volunteer role where she assists on the crisis hotline by taking calls and providing hospital and legal advocacy for sexual assault survivors.

Averdick read a piece titled “Empty Words” which shares her experience as a sexual assault survivor.

Since 2017, she has been involved in court proceedings against her attacker, and the trial has been postponed multiple times, but could happen any day now.

“Tomorrow I could get a phone call from the (district attorney) in Alabama, he’s gonna fly me down, and my trial is gonna start,” Averdick said. “I’m eager to get that started; it’s been a long time coming.” 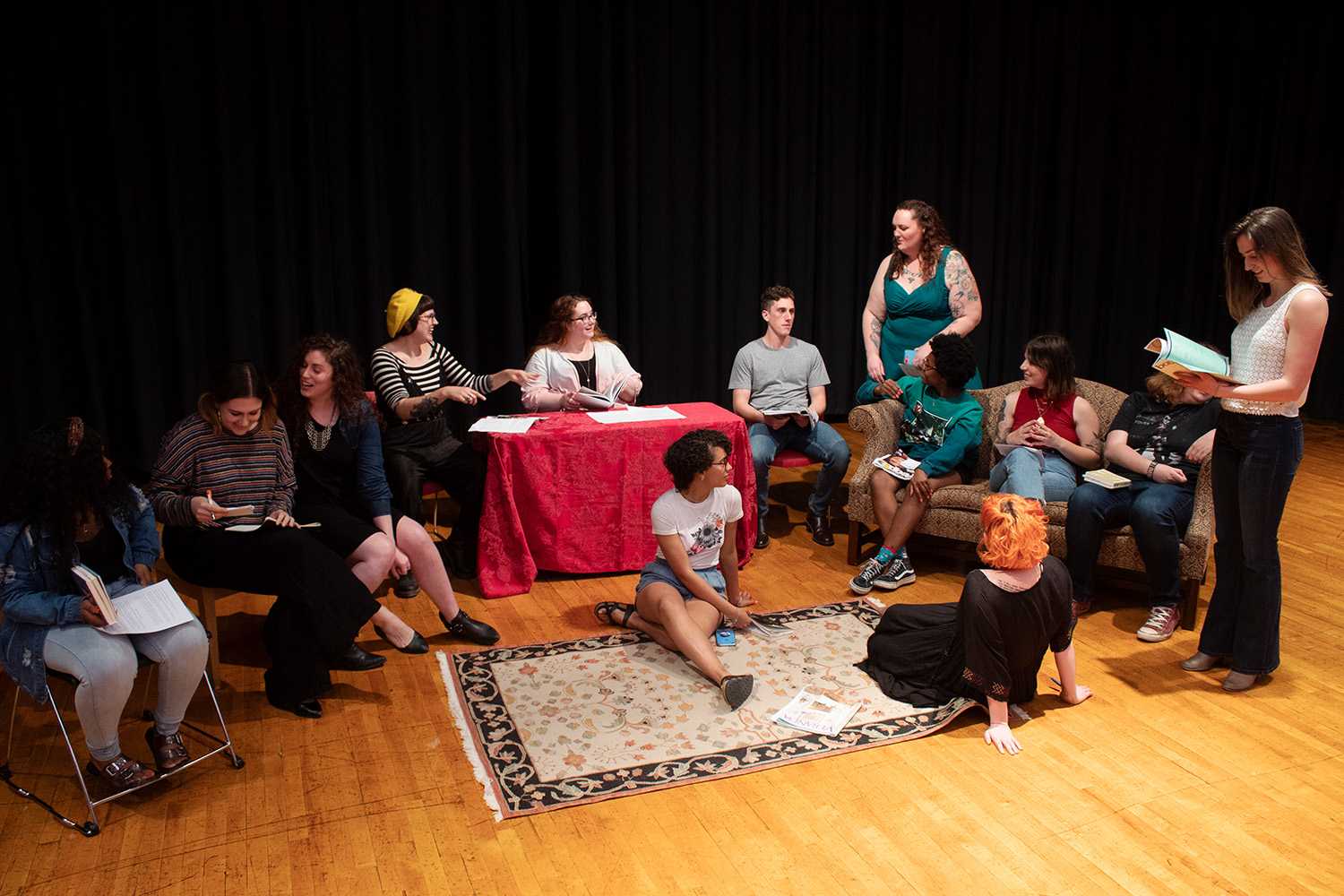 Student performers sit on stage surrounded by chairs and a couch during the First Things First performance. In the foreward, Jessica Folk, an assistant professor of English, said that the seating arrangement emulated a space that was open for performers to talk about difficult topics and be heard.

“This was just a really good point in my life to continue to be vocal about it,” Averdick said. “Especially when at some point I’m gonna have to be under scrutiny and sitting on a stand as the key witness in the entire trial.”

Averdick said that her goal in reading “Empty Words” was to share her story with everyone listening in the hopes that if it resonated with anyone, they would realize they aren’t alone in their experience.

“So often I hear from men and women when I respond to a sexual assault that they feel like they’re alone,” Averdick said. “I hope that anyone who has had an experience similar to this can hear my story and realize, ‘Okay, so I’m not alone.’”

She said First Things First gave a platform for stories like her own to be shared in their own words with an audience in a personal way.

“First Things First provided a night of healing, of saying your truth,” Averdick said.”People being willing to show up and hear you is very powerful.”