From the magazine: 24 Hours

Class. Eat. Study. Work. Friends. Party. Repeat. Days on and beyond the Hill are a balancing act for each student. Talisman photographers set out to document the hustle and bustle of student life in October. 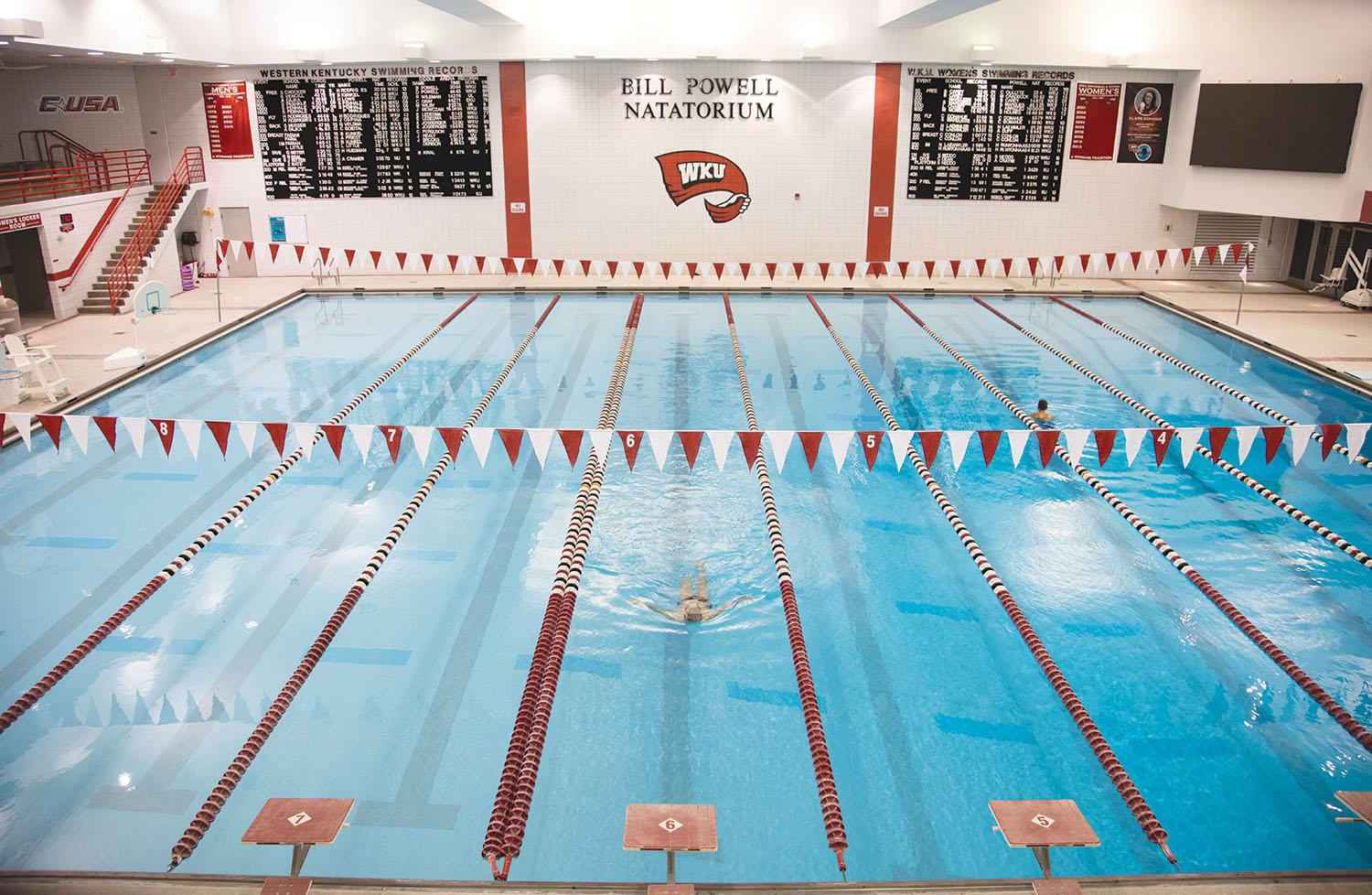 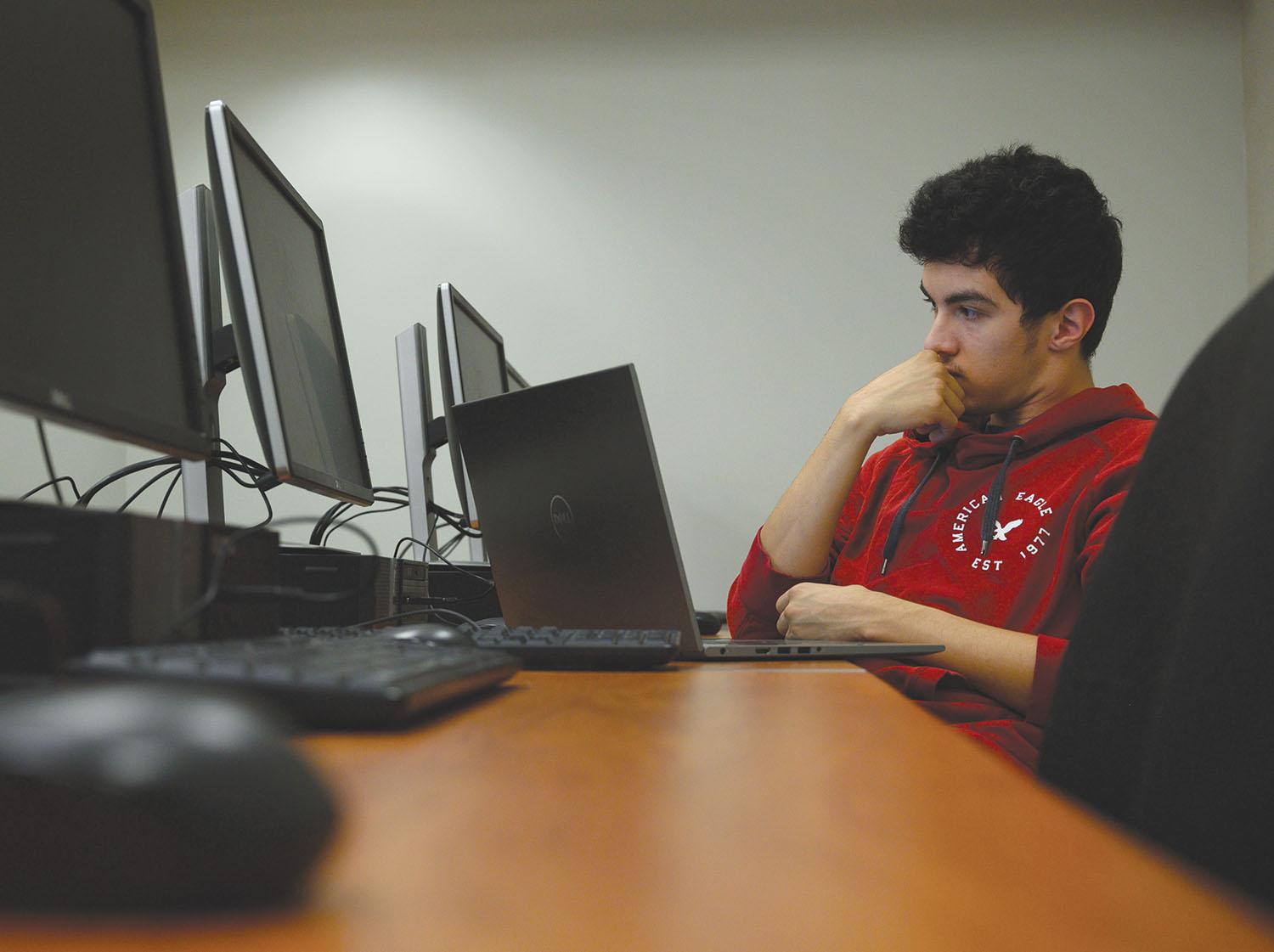 Columbia freshman Ali Burton gazes at his computer screen during a 9 a.m. problem solving and programming class in Snell Hall on Oct. 21. In this class, students learn to encode data onto computer devices. (Photo by Zane Meyer-Thornton) 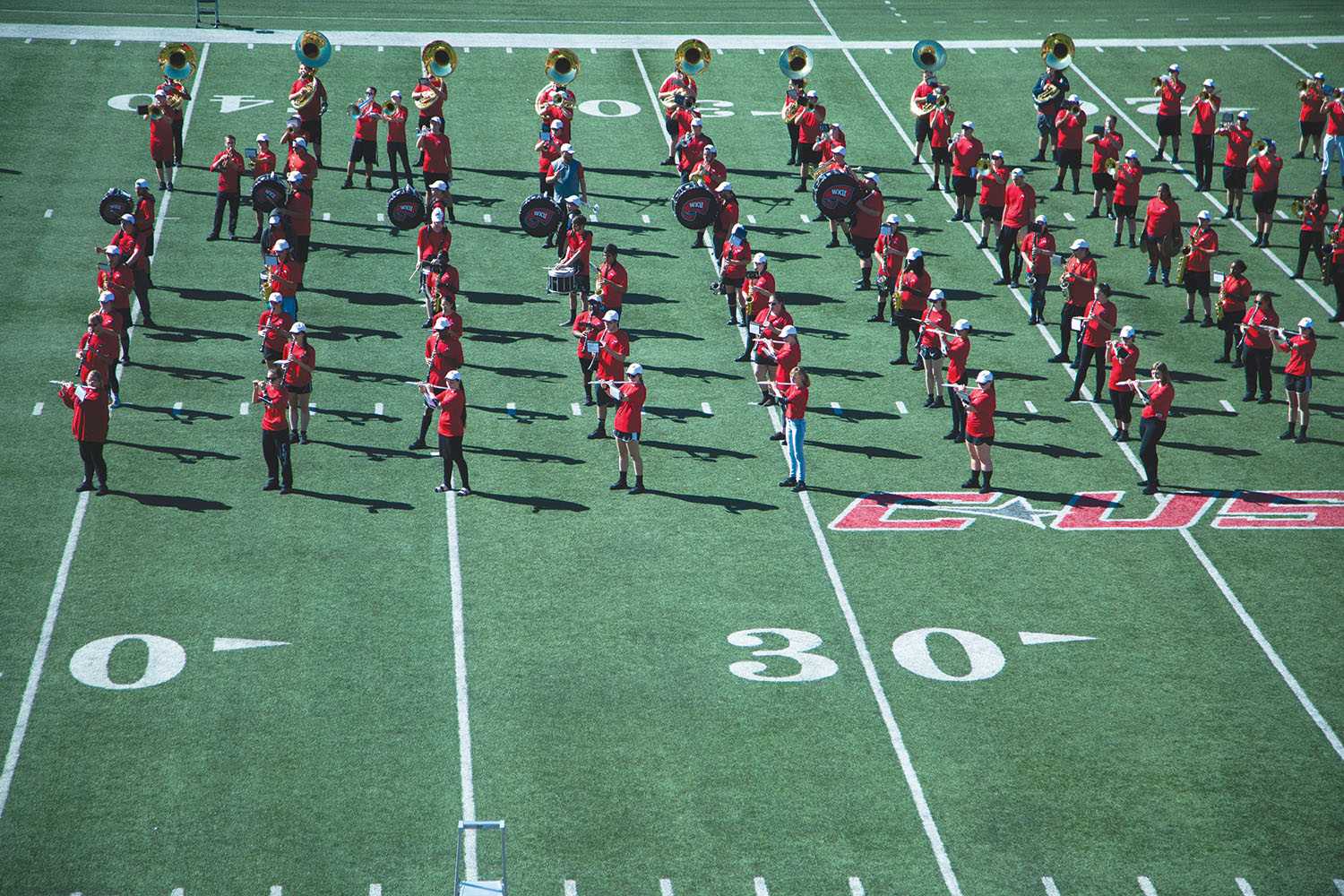 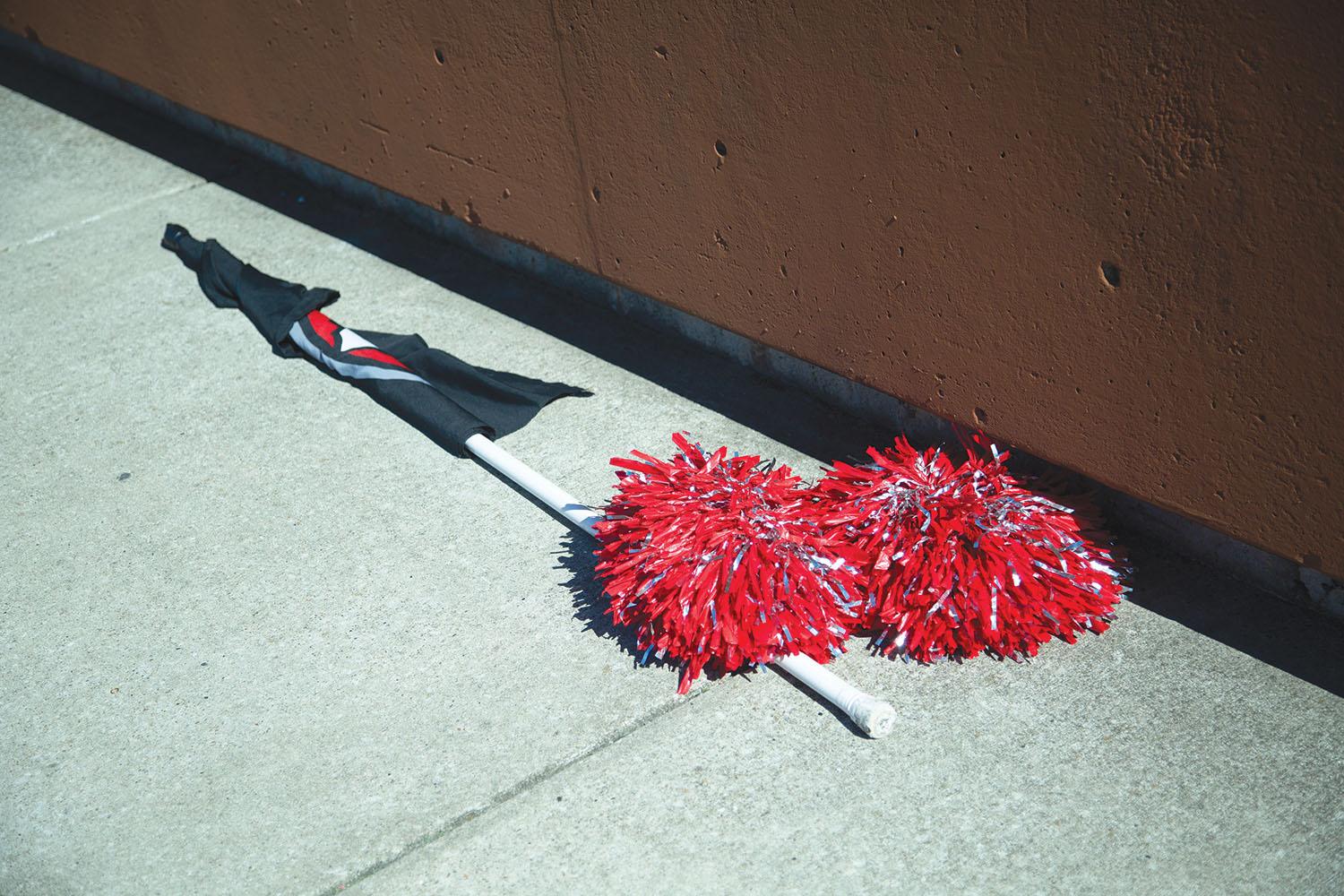 Props are scattered throughout Houchens-Smith Stadium during the Homecoming game rehearsal. The Big Red Marching Band practiced the halftime show with members of the band acting as homecoming queen and king candidates. (Photo by Alex Baumgarten) 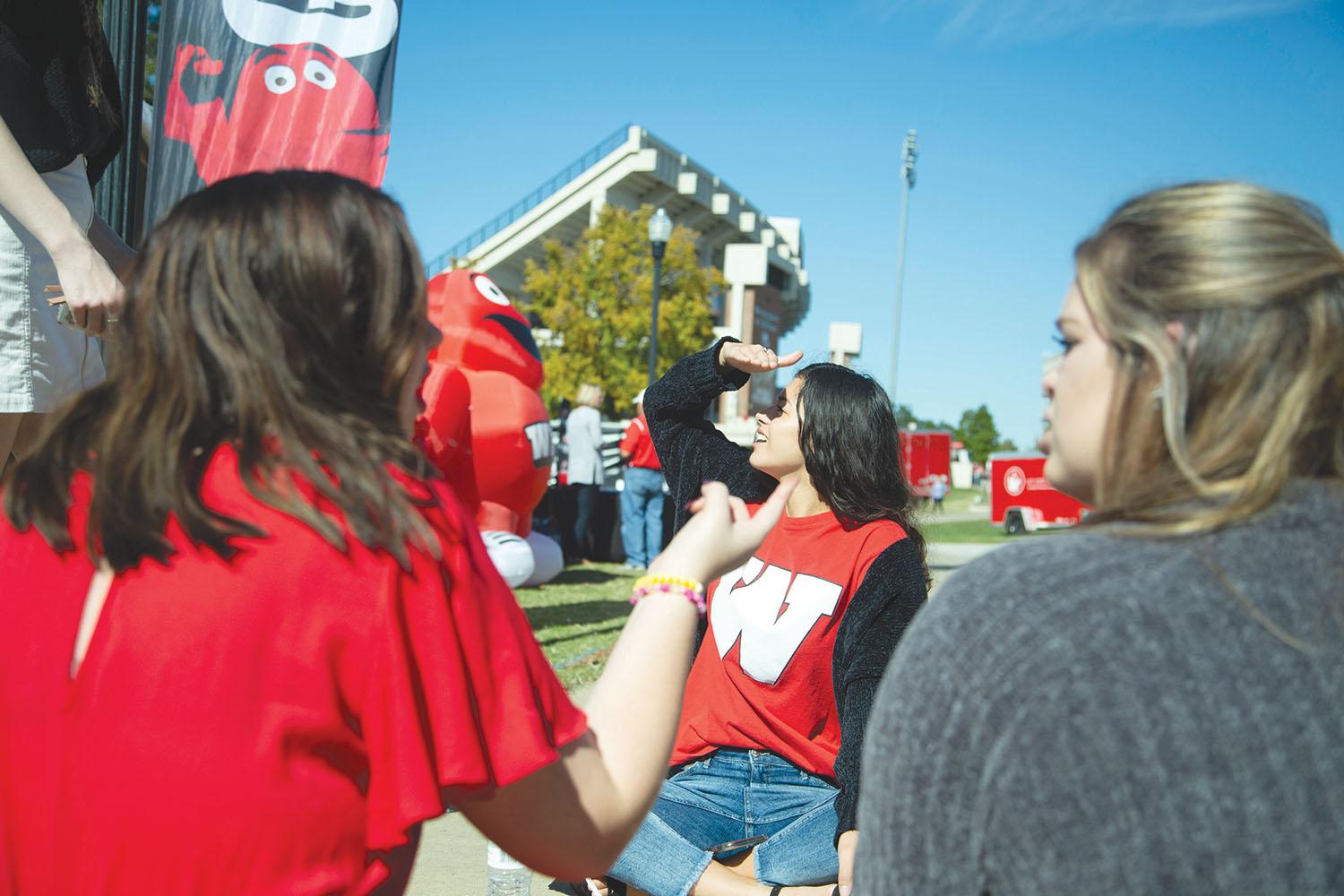 From left to right, Bowling Green freshman Grace Ray, Shelbyville junior Alexis Miller and Prospect senior Chloe Chandler tailgate at South Lawn with their sorority, Alpha Gamma Delta, on homecoming day at WKU. Chandler said they enjoy Homecoming because they love to “show up and show out for the Tops!” (Photo by Alex Baumgarten) 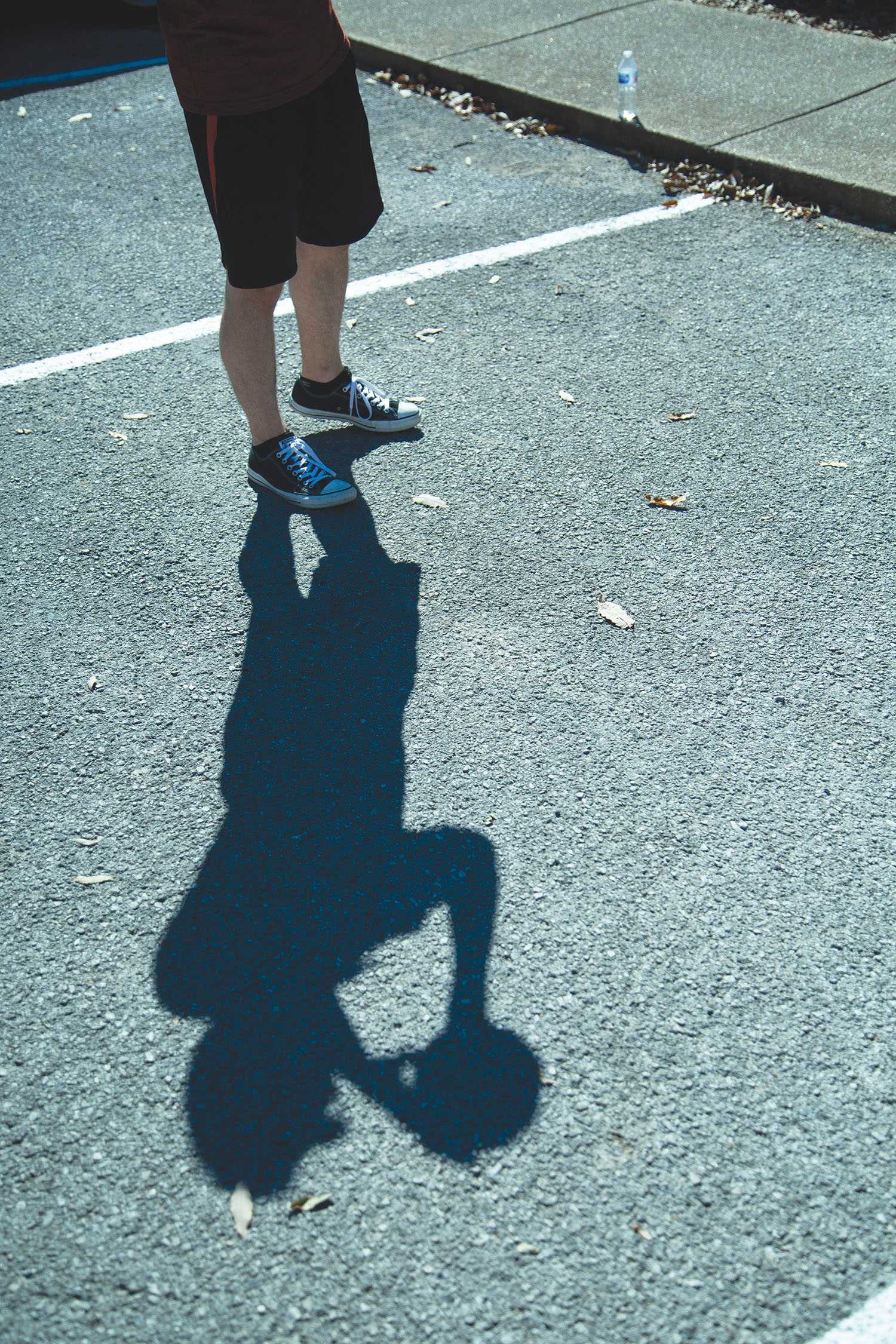 Berea junior Noah Pike throws a football with friends outside of Baptist Campus Ministries on Homecoming day. Members of BCM grilled hotdogs and hamburgers while waiting for people to show up to the tailgate. “My favorite part of Homecoming is when people who have graduated come back to visit us,” said Bowling Green junior Zach Gibbs, who was also at the tailgate. (Photo by Alex Baumgarten) 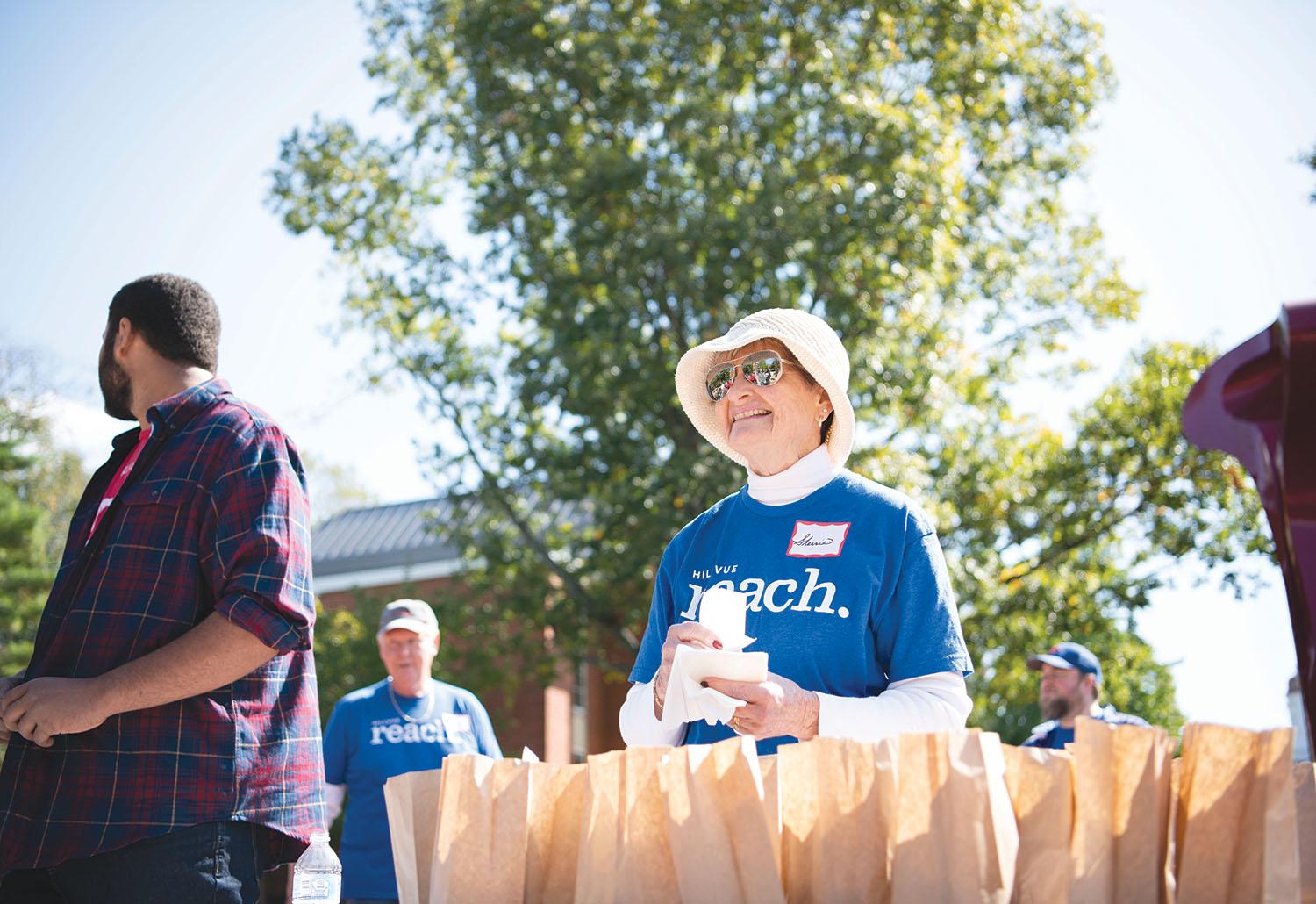 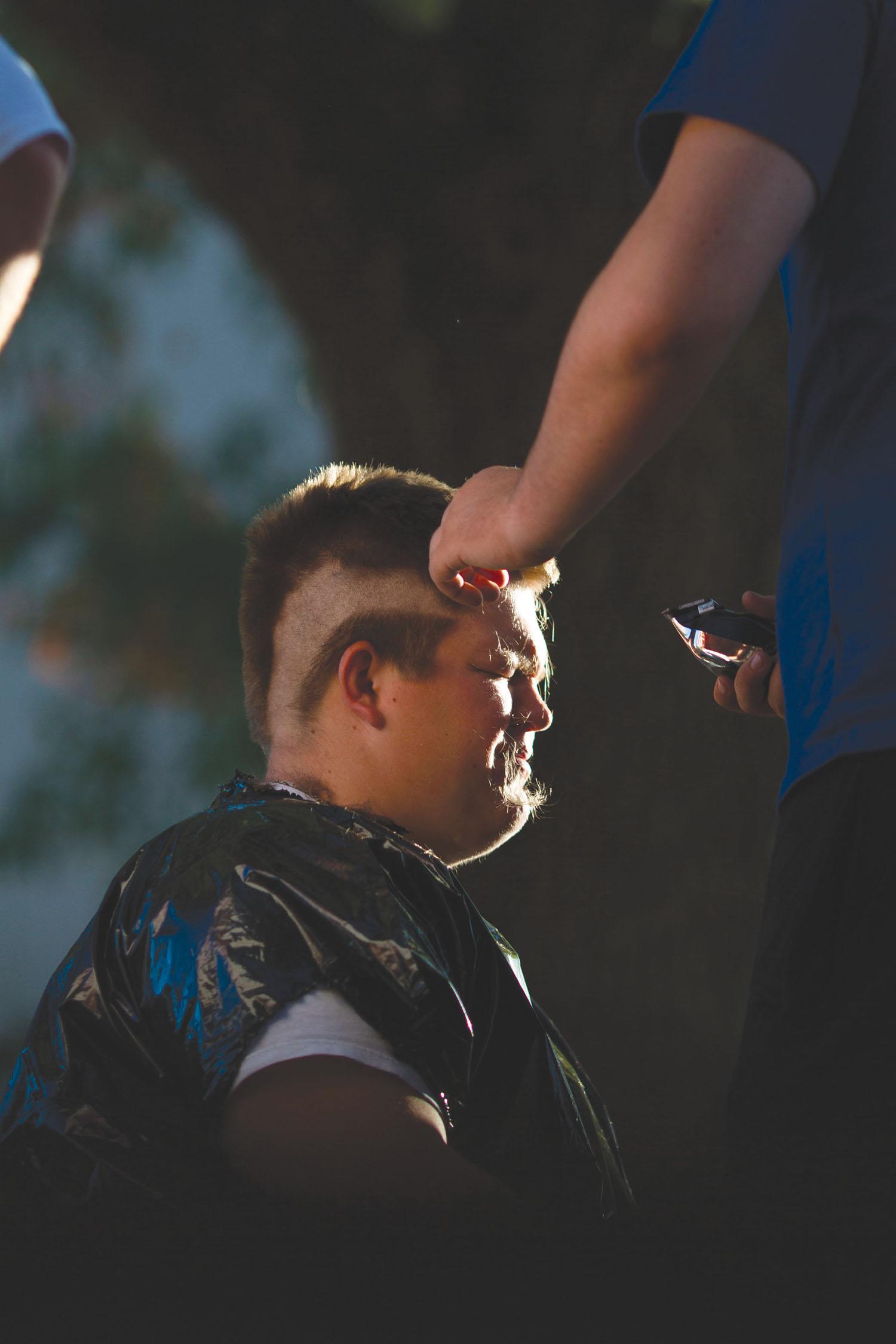 Jasper, Ind., junior Carter Gentry participates in the FarmHouse fraternity’s annual philanthropy: leukemia lymphoma and Be the Match Foundation. Gentry talked to his older fraternity brothers and decided to be part of the event to show support and show awareness. (Photo by Jordan Matthis 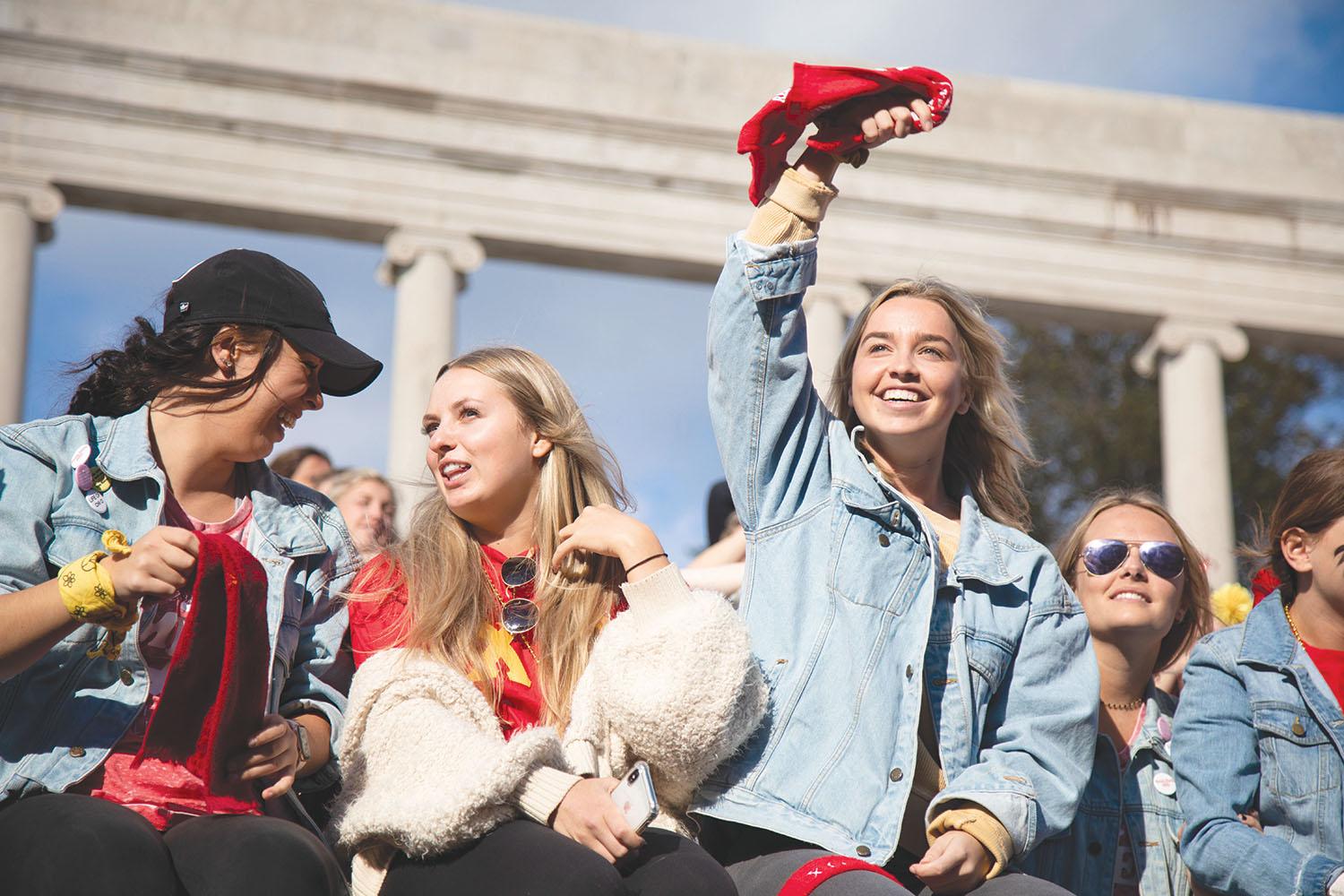 Louisville senior Emma Overstreet waves her red towel while cheering on her sorority, Chi Omega, during the Homecoming games on Oct. 16. Louisville junior Abby Miles, Homecoming chair for Phi Mu, said Homecoming is about spirit. “Homecoming in general is about showing spirit for WKU,” Miles said. “It’s a great way to bring all of the Greek organizations on campus together to spread the spirit.” (Photo by Morgan Bass) 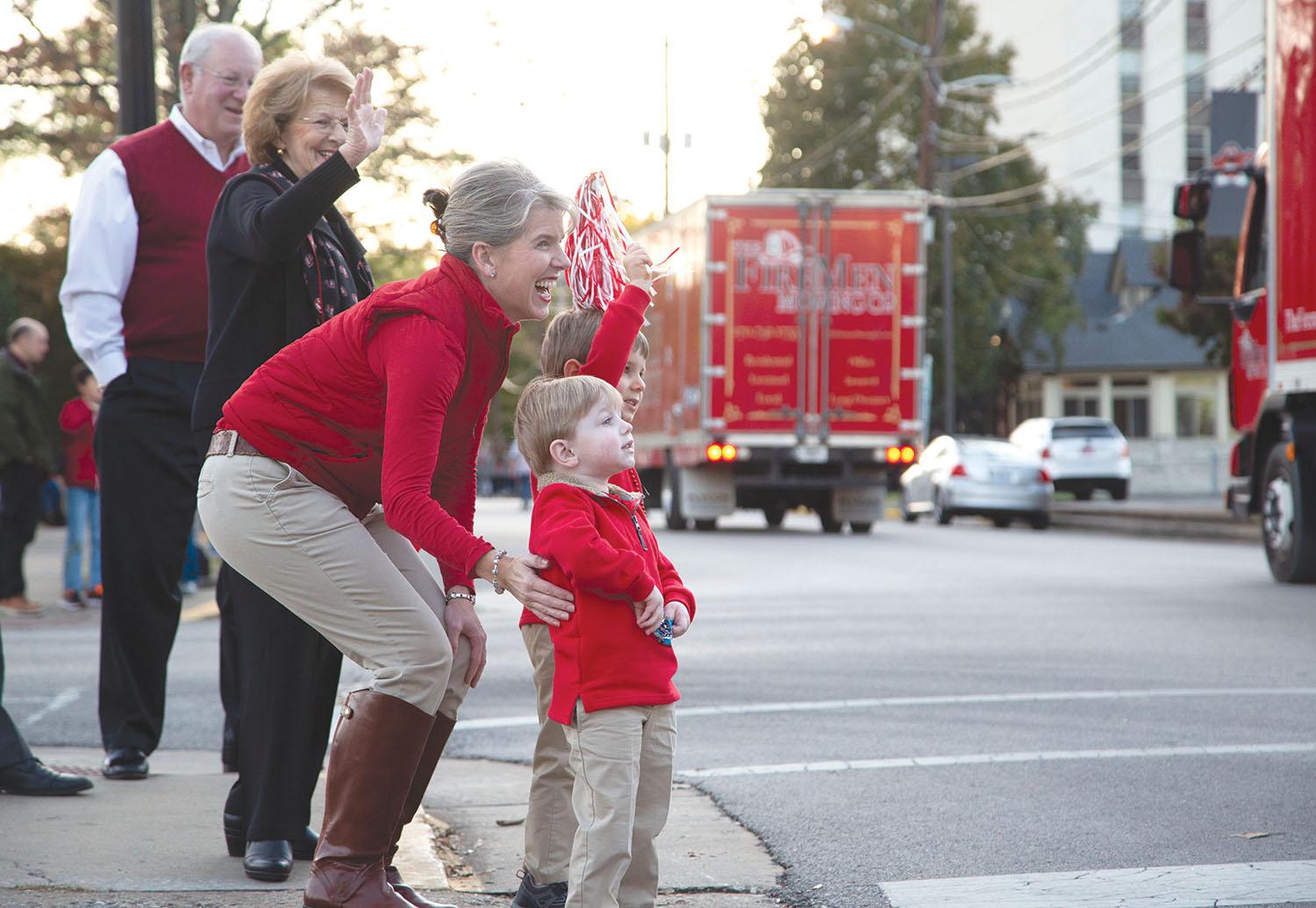 Thursday, Oct. 17 marked the beginning of WKU’s 2019 Homecoming Celebration. That Friday, students, faculty and local Bowling Green families gathered to watch the annual parade. This year’s theme was Decades of Spirit, which aimed to focus on honoring WKU’s history since it was founded in 1906. (Photo by Emma Steele) 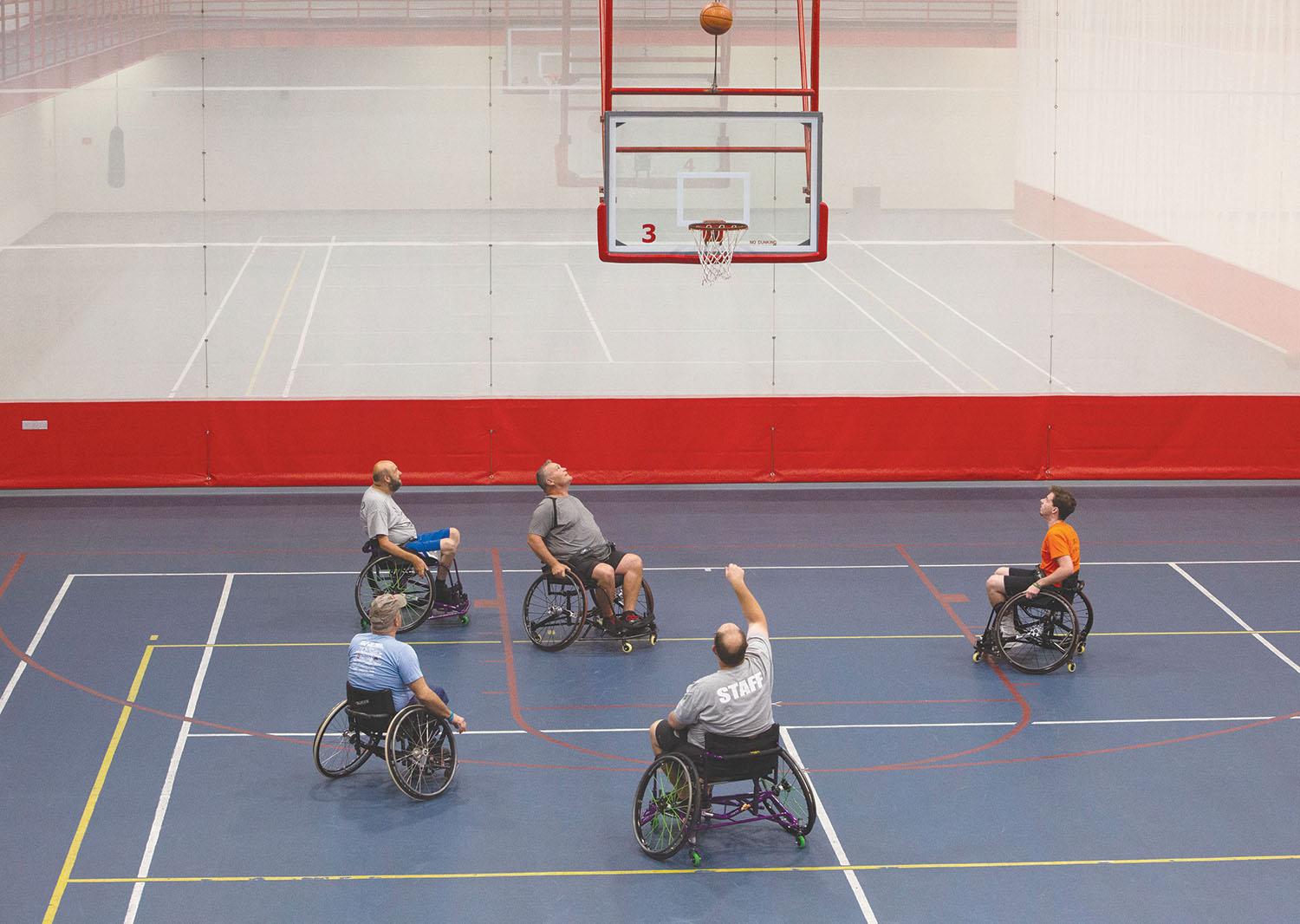 Wheelchair basketball is an annual event in the WKU Preston Center. Students and faculty gather to play a scrimmage on Oct. 15 at 6 p.m. “In official wheelchair basketball, you dont have to actually be in a wheelchair,” said Matt Davis, assistant director of the Student Accessibility Resource Center and coordinator of the event. “You must have some sort of medical condition that doesn’t allow you to play normal basketball.” (Photo by Emma Steele) 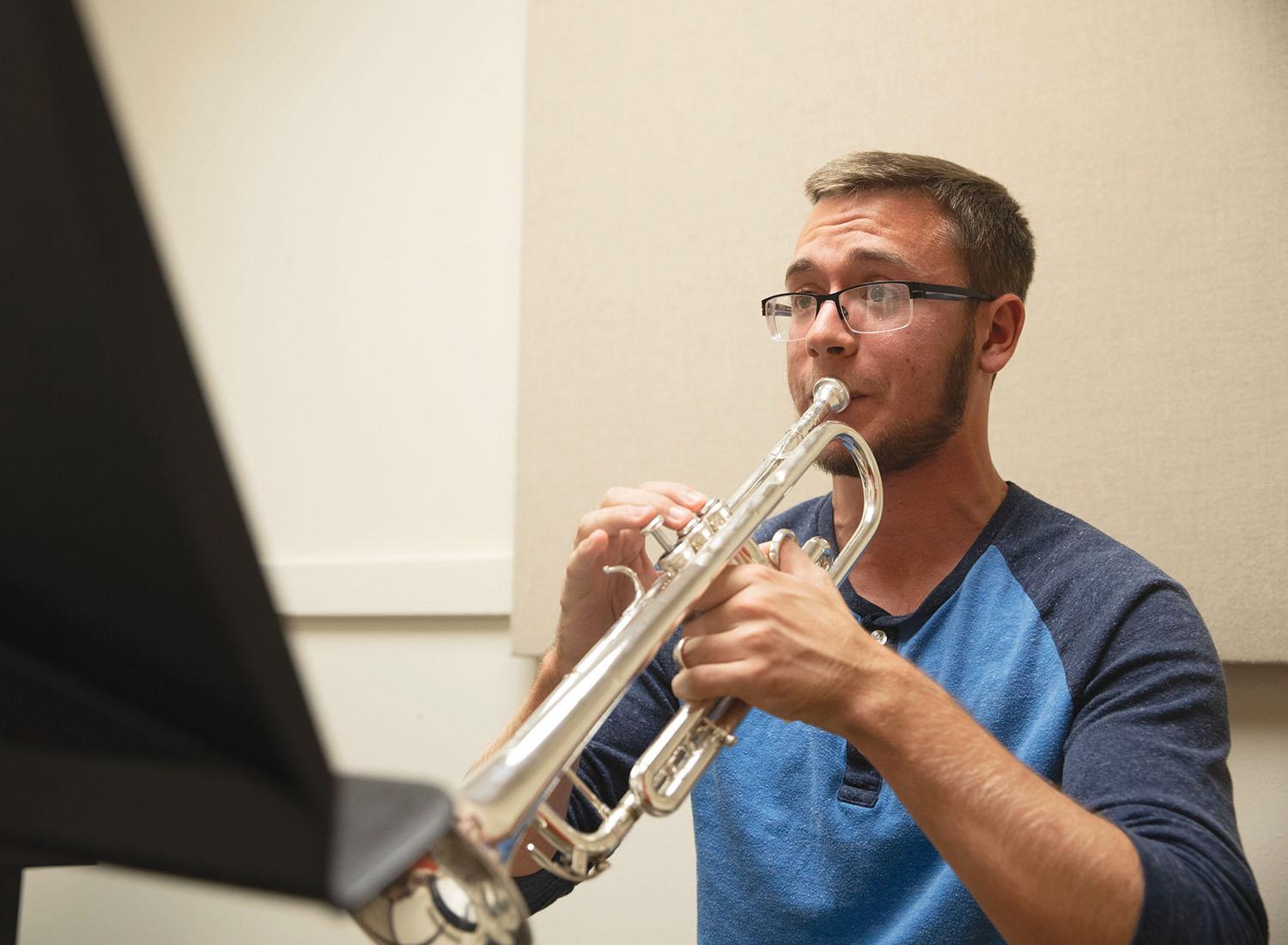 Jacob Ward, a sophomore from Hartford who is in the music education program, practices trumpet on Oct. 16. “The music kids are pretty much roaming FAC day and night,” Ward said. It’s always eating and class and practice and more practice.” (Photo by Joeleen Hubbard) 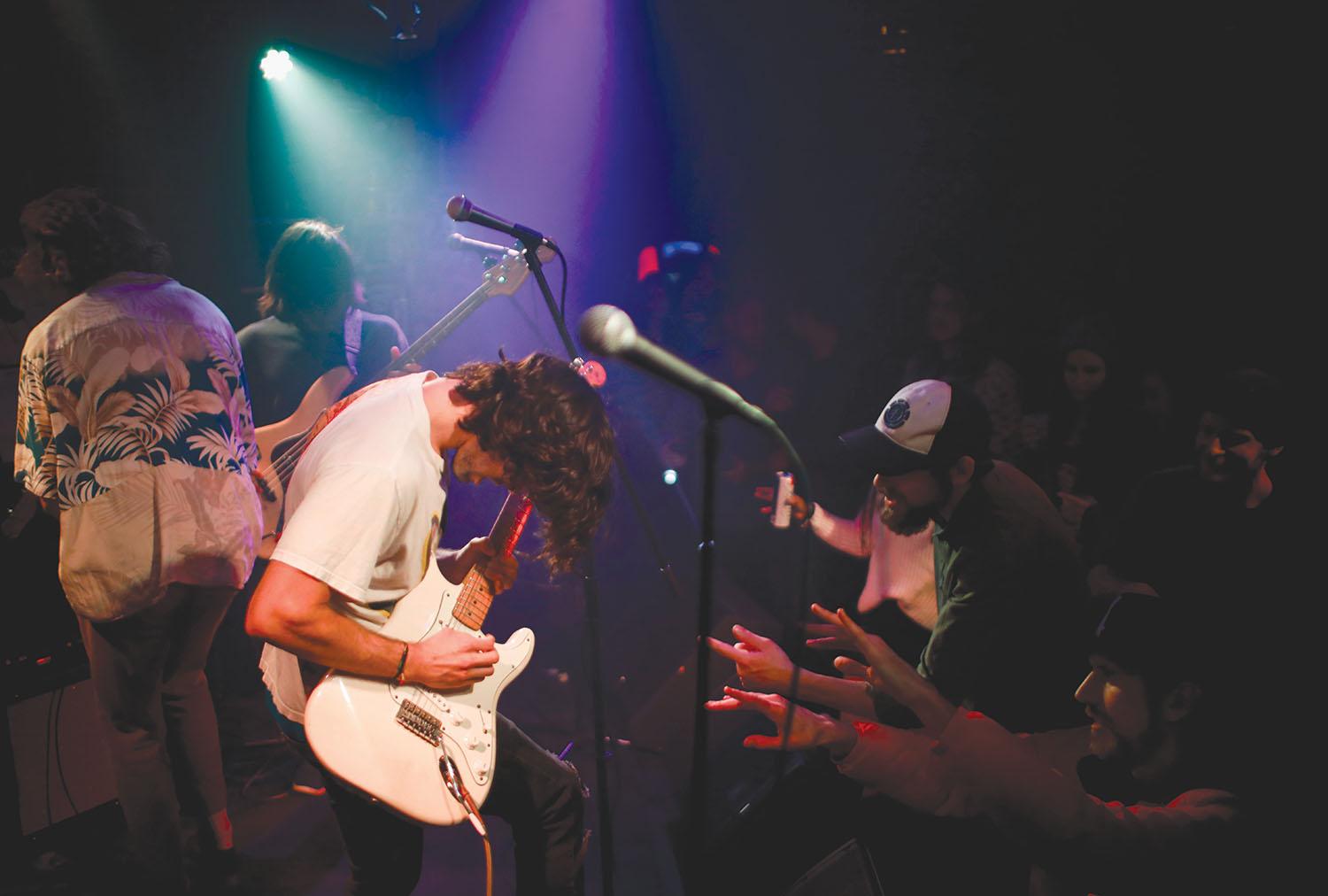 Nashville band Parrotfish plays at Tidball’s on Oct. 19. They were opening for the Bowling Green-based band, Dan Luke and the Raid’s release of their album ‘Out Of The Blue.’” (Photo by August Gravatte) 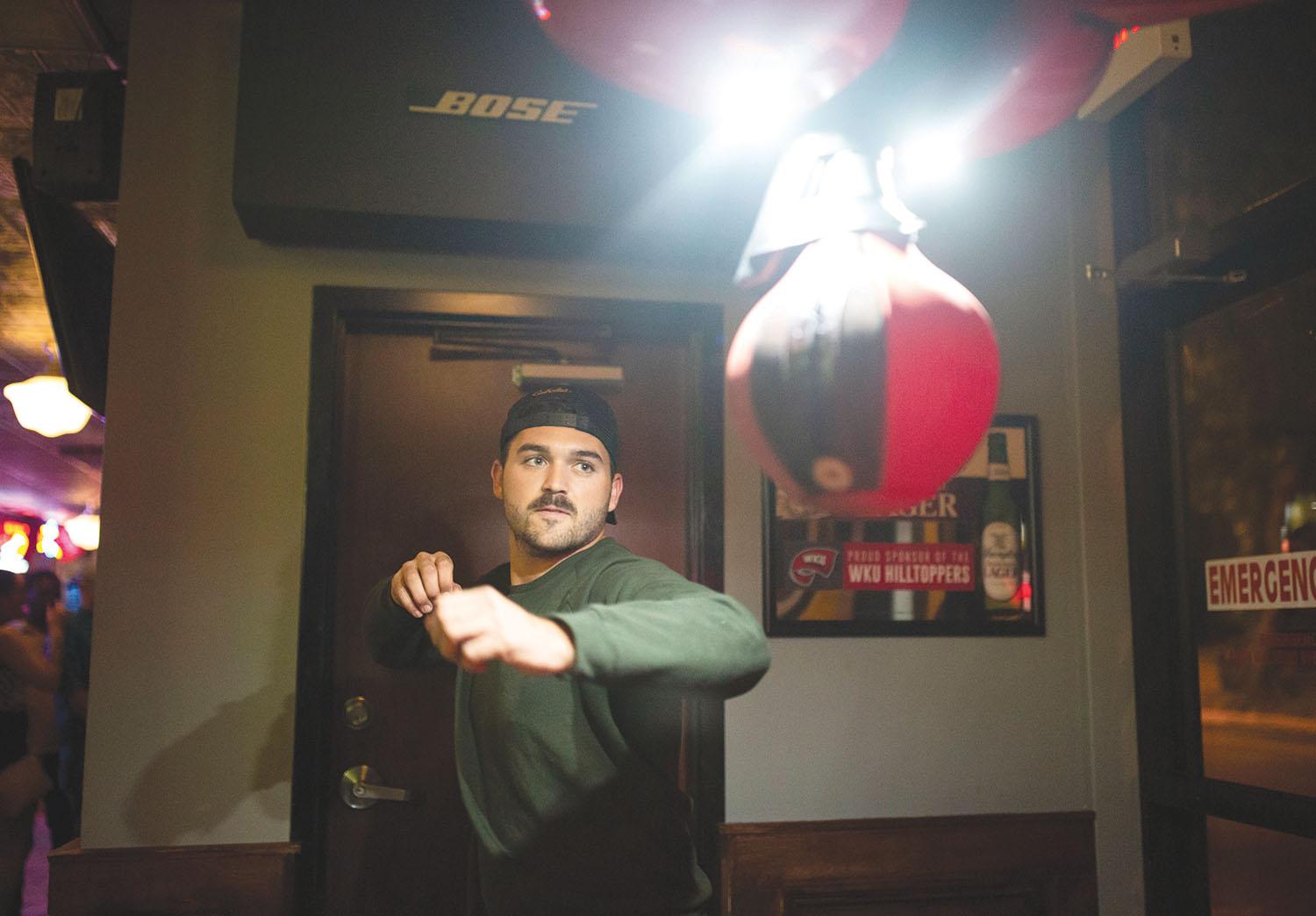 Nashville resident Abel Hingel takes a swing at the punching bag game in Hilligans bar on Oct. 5. Hingel has often visited Bowling Green to spend time with his brother and his brother’s fiancée. (Photo by August Gravatte) 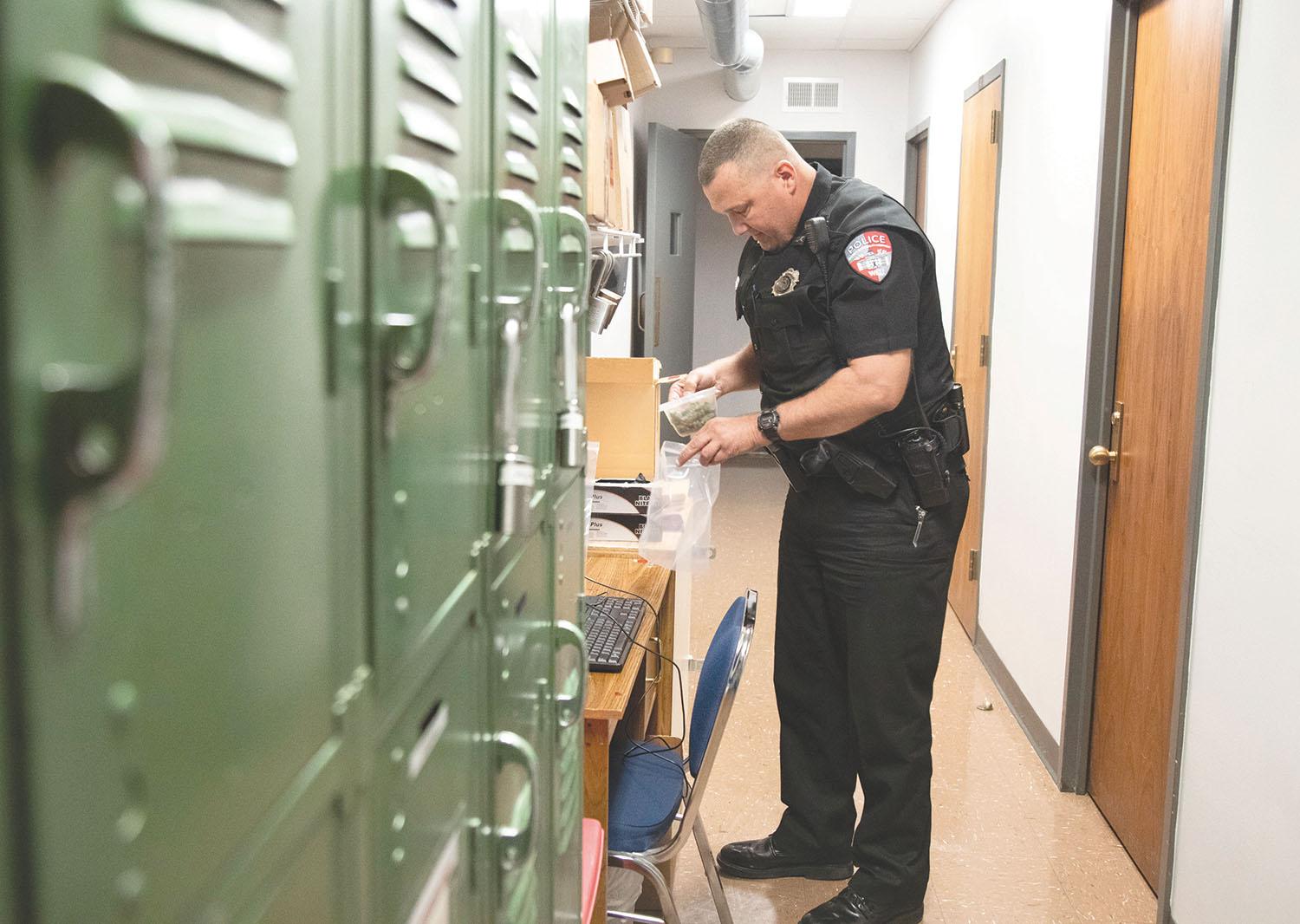 Officer Chris Duke of the WKU Police Department weighs out marijuana confiscated for evidence after a traffic stop on Oct. 19. “The majority of the calls I make during this shift is drug related,” Duke said. (Photo by Morgan Bass) 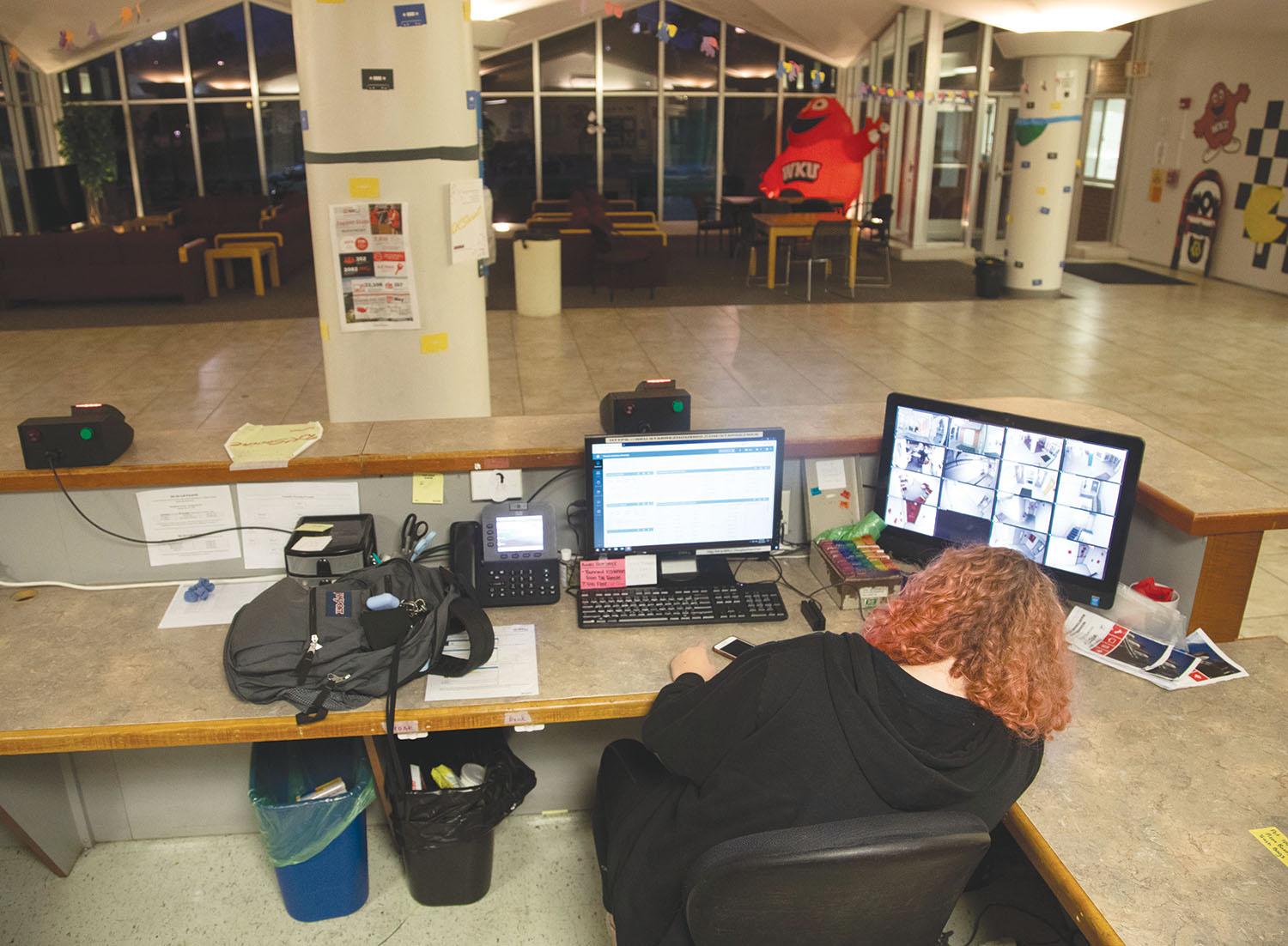 Louisville sophomore Kirsten Alexa is a desk assistant at Douglas Keen Hall and works an early morning shift from 4 to 7 a.m. “I do love this job — it’s not a bad job,” Alexa said. “I guess I just take this shift because it works better with my classes than others because they are later in the day. I wouldn’t be doing this job if I wasn’t a paid thing.” (Photo by Maggie Haun)