From the magazine: Backyard attractions

Bowling Green was founded in 1798 and has since evolved from a transportation hub for the South Central Kentucky area via railways and steamboats. According to the 2010 U.S. Census, Bowling Green ranks as the third most populated city in Kentucky with several industries and tourist destinations represented within the city limits.

Located along Nashville Road, Lost River Cave is one of Bowling Green’s oldest attractions, approximated to be thousands of years old. It provides several walking trails open to the public lined with wildflowers and streams, creating a natural oasis away from the business of daily life.

“Back in the 1920s and 1930s, people were having picnics in the valley around the cave,” Lansden said. “Eventually, due to the traffic in the area, the cave became a nightclub.”

Chad Singer, the tour staff supervisor at Lost River Cave, said because the cave was along the Dixie Highway, which connected the northern and southern parts of the U.S., traffic went past Lost River Cave, which drew visitors to the nightclub.

Lansden said the nightclub quickly became one of the most popular places in town and gained national recognition, and the club was able to hold large crowds and had popular jazz and blues performers of the time as entertainment.

Singer said the cave’s naturally low temperature kept the club at a cool 55 degrees year round. However, in the ‘50s, the club closed due to the construction of I-65 and because of the lack of adaptation to the rise of rock and roll music.

“People would throw anything you could imagine down there — tires, car parts, small furniture and appliances,” Jeffrey said.

Lansden said that decades later, in 1990, The Friends of Lost River, Inc. was established as a nonprofit effort by volunteers, including some WKU students, to clean and protect the cave for future generations.

Singer said during the cleanup of the cave and the valley, volunteers pulled out 55 tons of trash, approximately 14 African bush elephants worth of trash.

Lansden said that finally, in 1995, Lost River Cave opened to the public as a park. In 1998, boat tours began in the cave as a way to help fund the conservation efforts. Lost River Cave has since expanded its vision from conservation to include education and outdoor experiences.

Lost River Cave has continued to evolve by serving as a venue for weddings and birthday parties, and in March 2018, added a zip line course in the valley surrounding the cave.

“Our programs revolve around the uniqueness of the land,” Singer said. “Our goal is to help visitors learn more about their backyard, which in turn allows them to learn about themselves.” 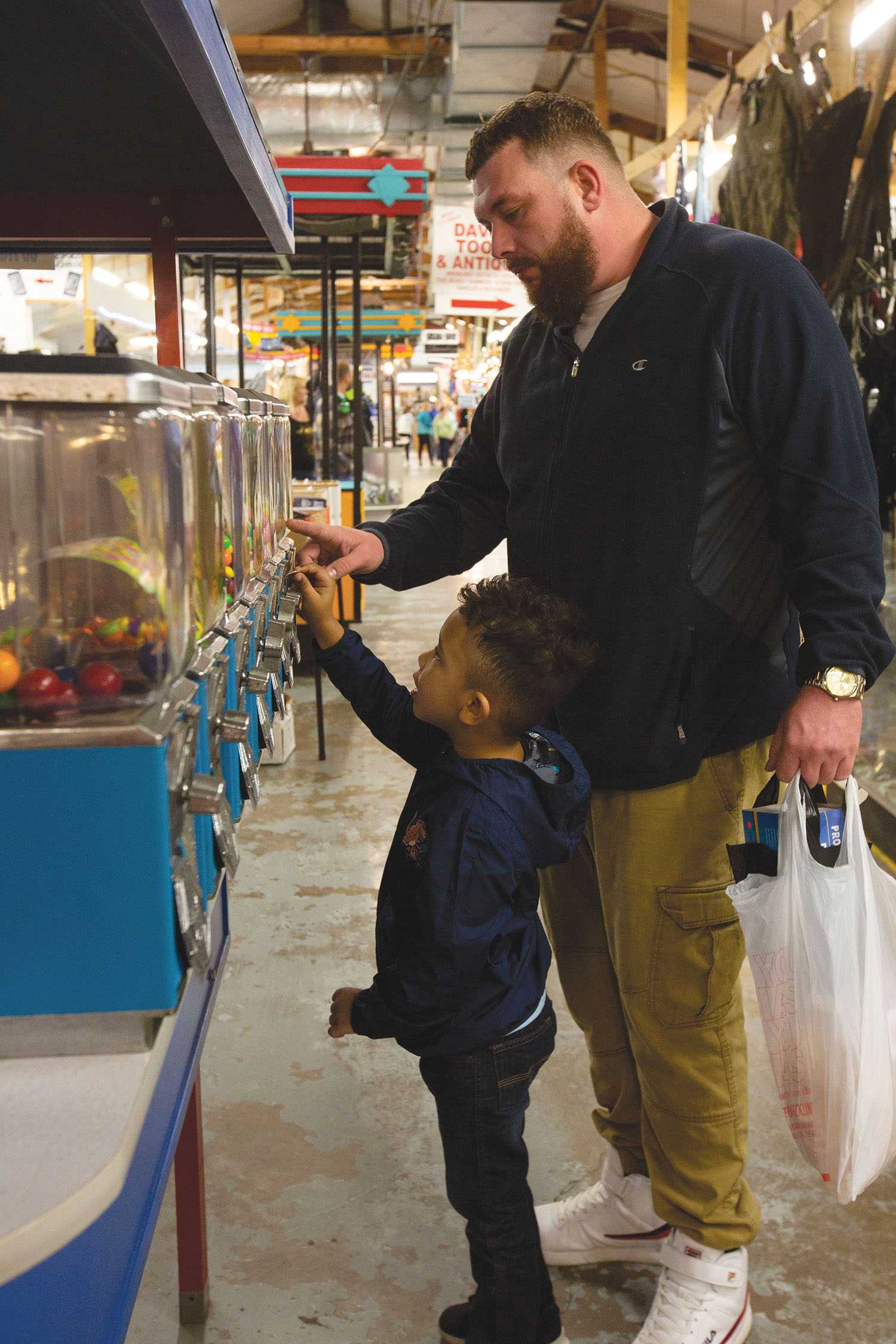 Josh Ellmon helps his son, Jelian, get some candy out of a candy dispenser. Ellmon said he and his family come to Flea Land about twice a month to get different things they need and have a family day out together. (Photo by Lily Thompson)

Flea Land of Bowling Green was established in 1994. Jonathan Sweeney, manager of Flea Land, said it is the largest indoor flea market in Kentucky at 85,000 square feet with over 300 vendor booths. Outside of the building, in the parking lot, there is space for outdoor booths to be set up for additional vendors. The indoor and outdoor flea markets are open Saturday and Sunday from 9 a.m. to 5 p.m.

Flea Land consists of a large building that houses various vendors and the antique market, which is open Monday through Friday from 10 a.m. to 5 p.m. and Saturday and Sunday during the indoor and outdoor flea markets’ hours of operation.

Since Flea Land’s opening in 1994, there have been a few renovations to increase the size of market spaces and to add a covered awning to the outdoor area, making it easier for vendors to sell their goods year round.
Sweeney said Flea Land attracts diverse shoppers each weekend during their hours of operation.

“We attract every kind of shopper whether they are trying to stretch their dollar as far as it can go, or if they are looking for some unique vintage goods,” he said. 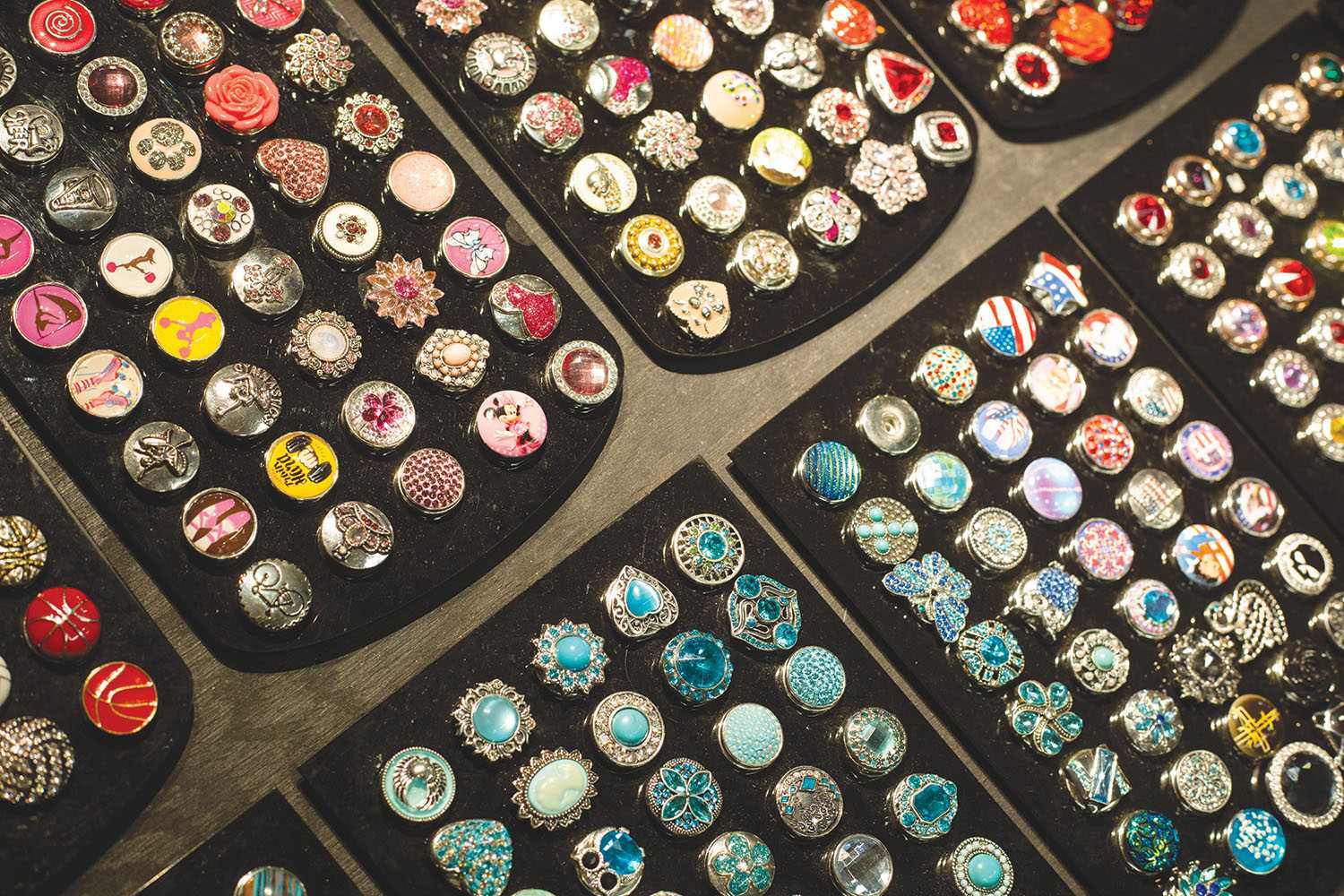 Nancy Absher sells customizable, mostly handmade jewelry. She travels around to different shows and events, but made a home at Flea Land during the last month of winter as she waited for the weather to warm up. Absher has been selling jewelry since she retired. “I ran into it in a store and Gatlinburg and loved the concept,” Absher said. “I taught myself how to do it, and I’ve been doing it ever since.” (Photo by Lily Thompson)

Inside Flea Land of Bowling Green, there are several hallways, each one containing an assortment of booths. Some vendors sell soaps and shampoos, and others sell live animals such as hedgehogs and chinchillas. Around Flea Land are the smell of fresh popcorn, music coming from various booths and low-hanging signs from the ceiling that help navigate shoppers through the corridors.

On the left side of the main hallway sits a booth called Rugs at Flea Land, which is owned by Angie and Isaiah Mayes. The Mayes family has had a booth at Flea Land for about seven years.

“This was originally a hobby,” Angie Mayes said. “Our son ran the booth, so it was a way for him to have a part time job.”

Angie Mayes said over the years, the Mayes family has seen their business grow and eventually expand to the approximately 3200-square-foot space they have now. She said more tourists than locals visit the booth.

“I think that people in Bowling Green forget about Flea Land, so we see a lot of people from out of town,” she said.

“It’s one of those things where if it’s not broken, don’t fix it,” she said. 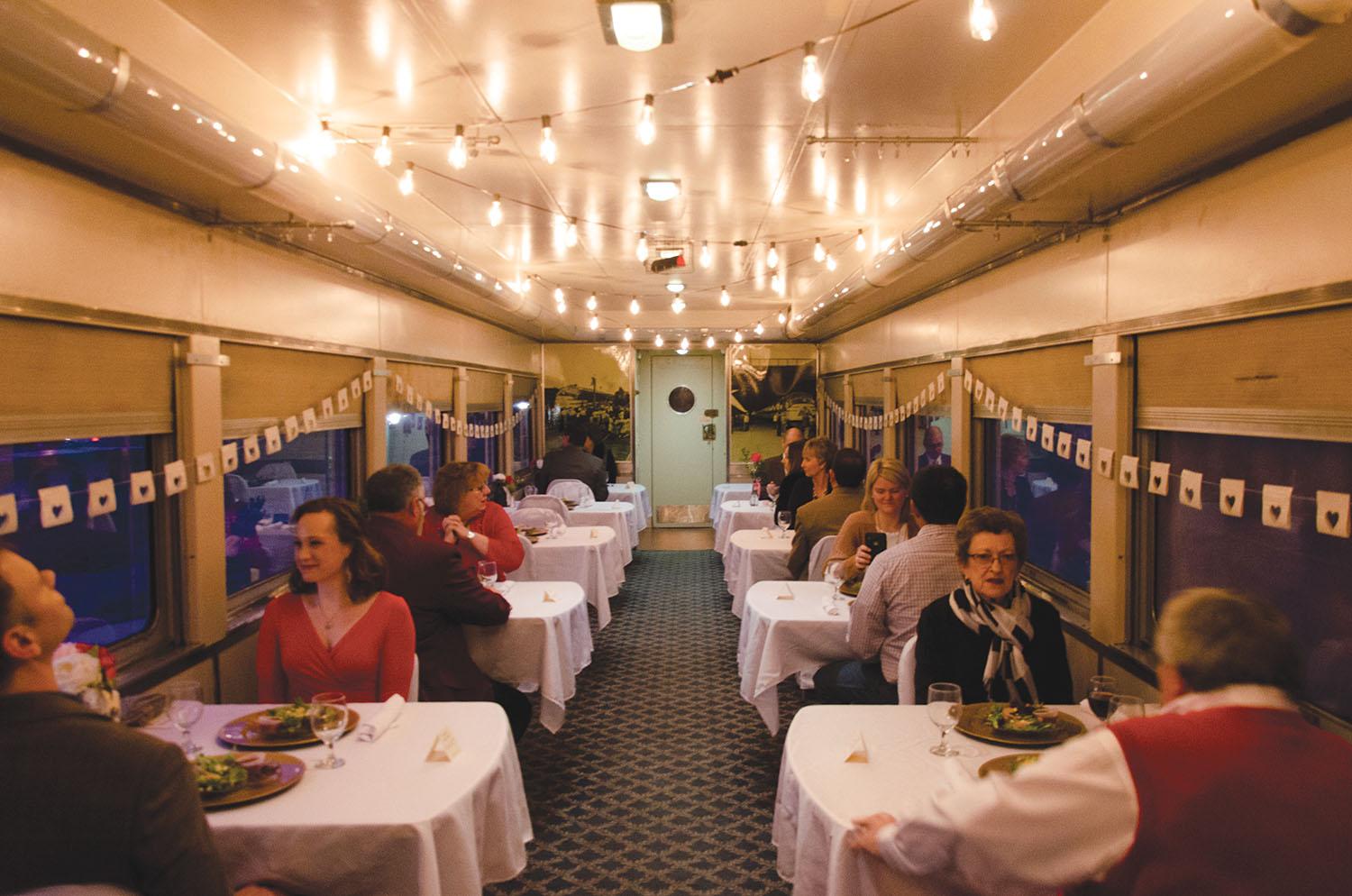 Couples attend the Romance at the RailPark event at the Historic RailPark and Train Museum on Feb. 16. Couples were served a meal at the Valentine’s Day event, which was held to raise money for the museum. (Photo by Maggie Smith)

Bowling Green has a long history with trains stemming back to 1859 when its first railroad depot was built, said JonathanJeffrey, the library special collections department head at WKU.

According to the book “Bittersweet: The Louisville and Nashville Railroad and Warren County,” written by both Jeffrey and Michael Dowell, what is now the Historic RailPark Train Museum and L&N Depot was the third depot in Bowling Green.

Jeffrey said it was built in 1925 and replaced the two previous depots. The first depot burned down during the Civil War, and the second was made out of wood, had low-lying water and was ultimately unsafe for its visitors.

According to “Bittersweet,” the new building was luxurious for Bowling Green. It was grandiose with hexagonal tiles paving the lobby floor, a sanitary drinking fountain and a dining room, and visitors thought it was beautiful. At the height of its time, over 20 trains departed from the depot each day.

The depot served the community for 54 years until 1979, when the last passenger train departed from the station. Over the years, the depot remained vacant, occasionally changing ownership and being used for storage. In 1993, fundraising and efforts to restore the depot began.

“The depot being restored is one of the best things that has happened here,” Jeffrey said. “So many people in the community had ties to the building.”

In September 2007, the railpark opened again to the public as a train museum.

Jamie Johnson, the executive director of the railpark, said several events have been held annually at the railpark in the last few years, such as Valentine’s Day dinners and Easter bunny brunches. The railpark can also be rented out for birthday parties, corporate events and weddings.

“The goal of these events is to, of course, raise funding for the depot, but to also give the visitors a different experience that isn’t found anywhere else,” Johnson said.