From the Magazine: Cash cows

On an unusually warm February morning, before the sun broke the horizon, the only sound that could be heard was the occasional “moo” of an awakening cow. The scent of cow manure lingered in the air. This early start was just another day for Carl Chaney, who wasted little time getting down to work.

Sitting in front of his computer, Carl Chaney proceeded with his first order of business. He rummaged through the papers covering his desk and began to sort the farm’s daily tasks.

Carl Chaney and his wife, Debra Chaney, founded Chaney’s Dairy Barn in 2003. Carl Chaney’s great-grandfather, James Riley Chaney, purchased the farm in the late 1800s. The farm had “everything,” Carl Chaney said, from chickens and pigs to beef cattle and tobacco.

In 1940, the farm narrowed its focus down from a diverse set of endeavors to exclusively dairy. The line of succession went down the family tree to Carl Chaney in 1988. For him, there was never a doubt he wanted to run the farm. He has memories that date back to March 1960, when he remembers his father and sister plowing through 24 inches of snow on a tractor down Highway 31W to get to the store.

In the early part of the 21st century, after struggling to maintain profits, the Chaney family spent years researching alternatives and solutions. They learned that other dairy farms were producing and selling homemade ice cream in order to stay afloat.

Carl and Debra Chaney then saw a PBS documentary regarding an ice cream course at Pennsylvania State University. In January 2003, the two attended the 10-day course, where they learned how to make ice cream mix, the difference in solid and butterfat levels and how to combine these skills to make good ice cream. Afterward, they stayed for another four-day exercise focused on the retail process.

Every year since, they visit the National Ice Cream Retailers Association where they enter contests and learn more about marketing, cleaning and selling ice cream.

Now, the Chaneys are known for serving the community the fruits of their knowledge,
all the while putting in numerous hours creating the delicacy. 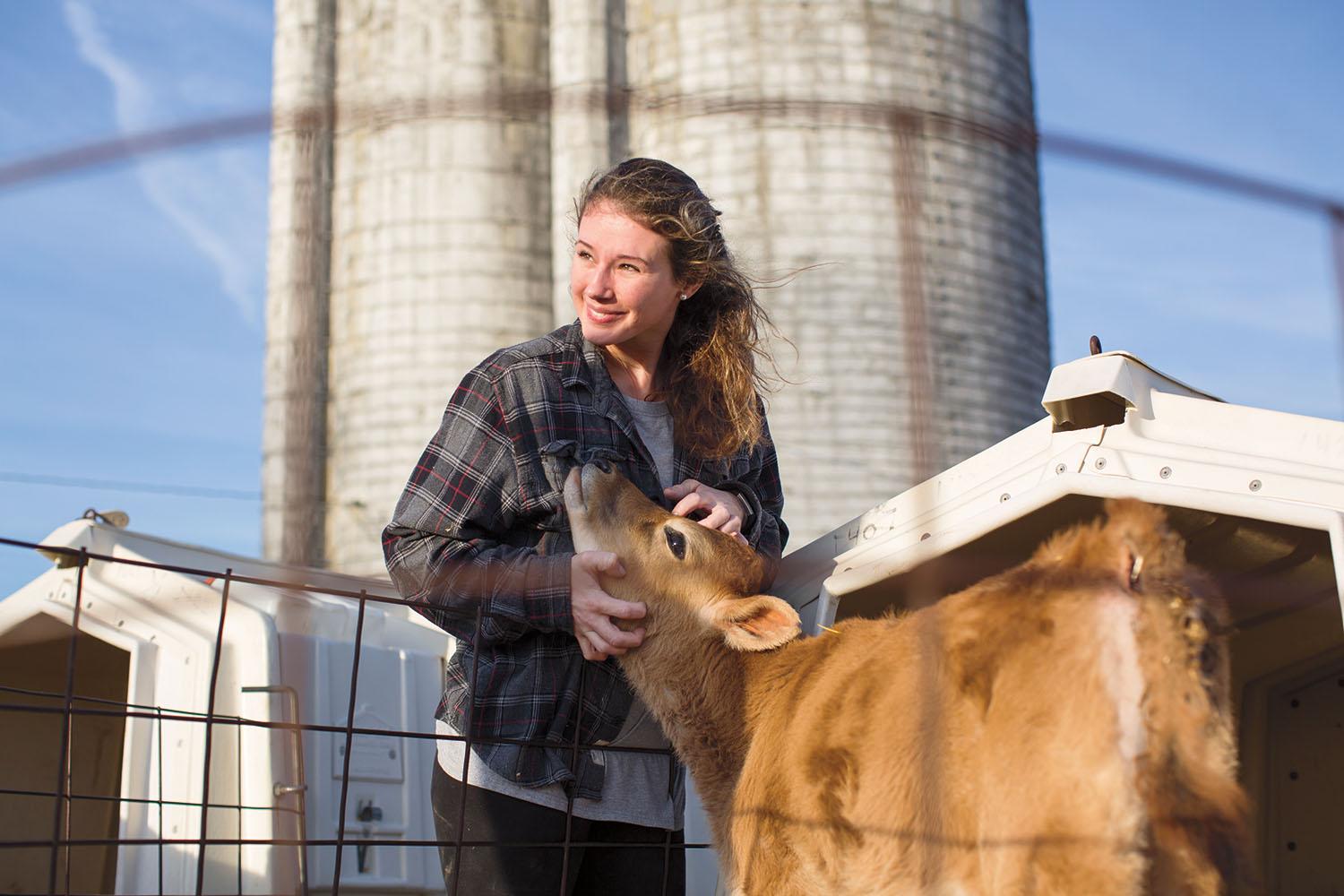 Dory Baker pets a young calf the dairy farm. “They all have different personalities,” she said. “You can tell them apart after a while.” Baker enjoys spending time with the growing calves as they learn to walk and play.

At his desk, Carl Chaney began sorting through a complex chart of numbers and casually mentioned the “robot” in the next room. The chart was a labyrinth of information containing statistics about each of the cows that needed to be milked.
Carl Chaney realized the vast set of numbers on his screen would be bewildering to someone unfamiliar with the work and decided to show off the machine that recorded the information.

In a bright white room, the space hummed as the robot adjusted a Jersey cow’s udders to sync up to the machine. When the cow finished milking, the gate opened for her to leave. As the exit closed, the entrance gate opened for another cow who walked in, got comfortably situated by the robot and was milked.

“We do not force the cows into the robot,” Carl Chaney said. “They go in completely on their own.”

The robot, formally named “Lely Astronaut,” is relatively new to Chaney’s farm. Introduced on June 14, 2016, it has played a significant role in efficiency and productivity. Carl Chaney said prior to the robot’s inception, the cows were milked by hand and demanded more work.

The robot also helps ensure the health and safety of the animals. According to a sign posted along the self-guided tour, the robot can detect the weight and production of each cow, allowing for health concerns to be detected sooner. The robot can scan this information with a sensor wrapped around the cows’ necks, similar to a dog collar.

While advanced machinery improves the process of daily work, countless other areas of the farm must still be maintained manually.

Chaney moved on to his next task of cleaning out the farmhouse. After crossing to the other side of the fence in his protective boots and farming attire, he entered the farmhouse where the 53 milk cows are kept.

Using a tractor, he pushed all of the excess mud and manure out of the farmhouse. Keeping the cows clean is not simply for looks, he said. Cleaner cows help the robot operate better. He searched for a cow sleeping on the other side of the house — the robot said it was her time to milk. 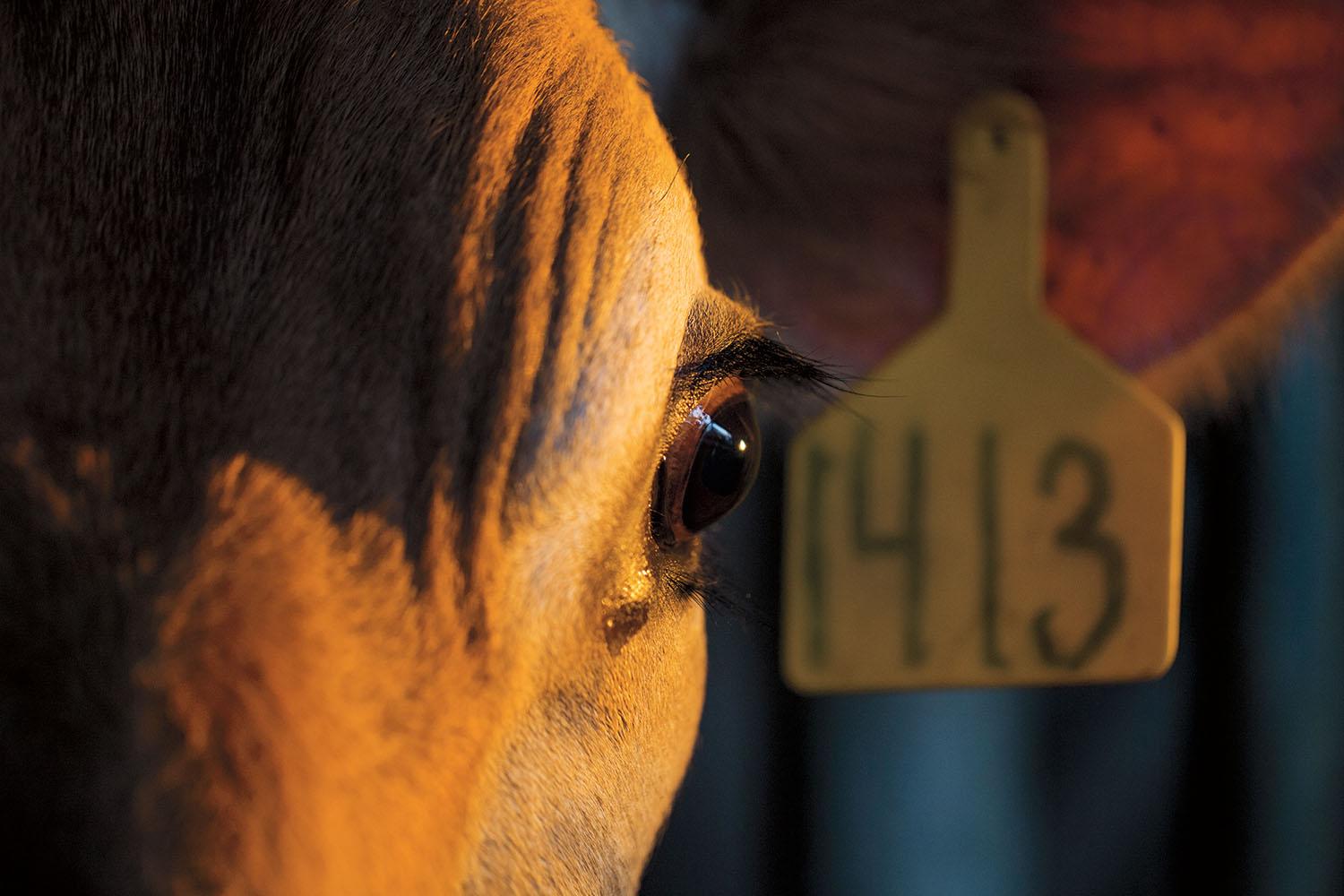 A Jersey cow looks up from its morning feed at the Chaney farm on Tuesday, Feb. 20. Jersey cows will eat about 30 to 40 pounds of feed a day.

It takes a village

At this point, Carl Chaney’s work on the farm was over for the time being. He was scheduled to speak to an elementary school class, so he turned over the work to his niece, Dory Baker.

Baker has been a crucial addition to the farm. Prior to her working full time, Carl Chaney said he and his wife were worried they might have to stop working because of how intense and demanding the labor was for them.

Twelve hours shifts may sound like madness to some, but they are very typical for Baker, who began the day at 7 a.m. cleaning the robot down with a hose. Her focus then shifted to getting feed ready for all the cows on the farm.

Up to this point, Carl Chaney had focused on the more mature cattle, but Baker assumes responsibility for all the cows at Chaney’s — about 120. One of the main challenges, Baker said, is that the farm has twice as many cows as it should. She said farms typically have one cow for every acre of land, and the Chaneys own 53 acres.

“It’s where the help of neighbors is important,” she said.

Neighbors allow the farm to grow produce like hay, which serves as the cows’ food supply, on their land in order to keep the operation sustainable. Without such assistance, the number of cattle on the farm would be overwhelming.

On top of the manual labor on which farm work relies, Baker said farming also requires scientific knowledge. She attended Virginia Tech University majoring in dairy science before she got a call from her uncle asking her to come help on the farm.

“This is where my degree was going to take me anyway,” she said.

Baker said the calves need 3 to 5 percent of their body weight in food until they turn 5 years old. After taking care of feed for the older cattle, she prepared food for the younger calves. She carried several large bottles of milk around, one for each of the calves who eagerly awaited her in their pens. The youngest, only a few days old, staggered out of its pen to drink its bottle.

Baker acknowledged the hard work in caring for the farm, saying the cows’ health often “keeps her up at night.” But the late nights and early mornings are worth it because of the passion she holds for the cows. She said watching them grow up and hit milestones was one of the greatest parts of working on the farm. 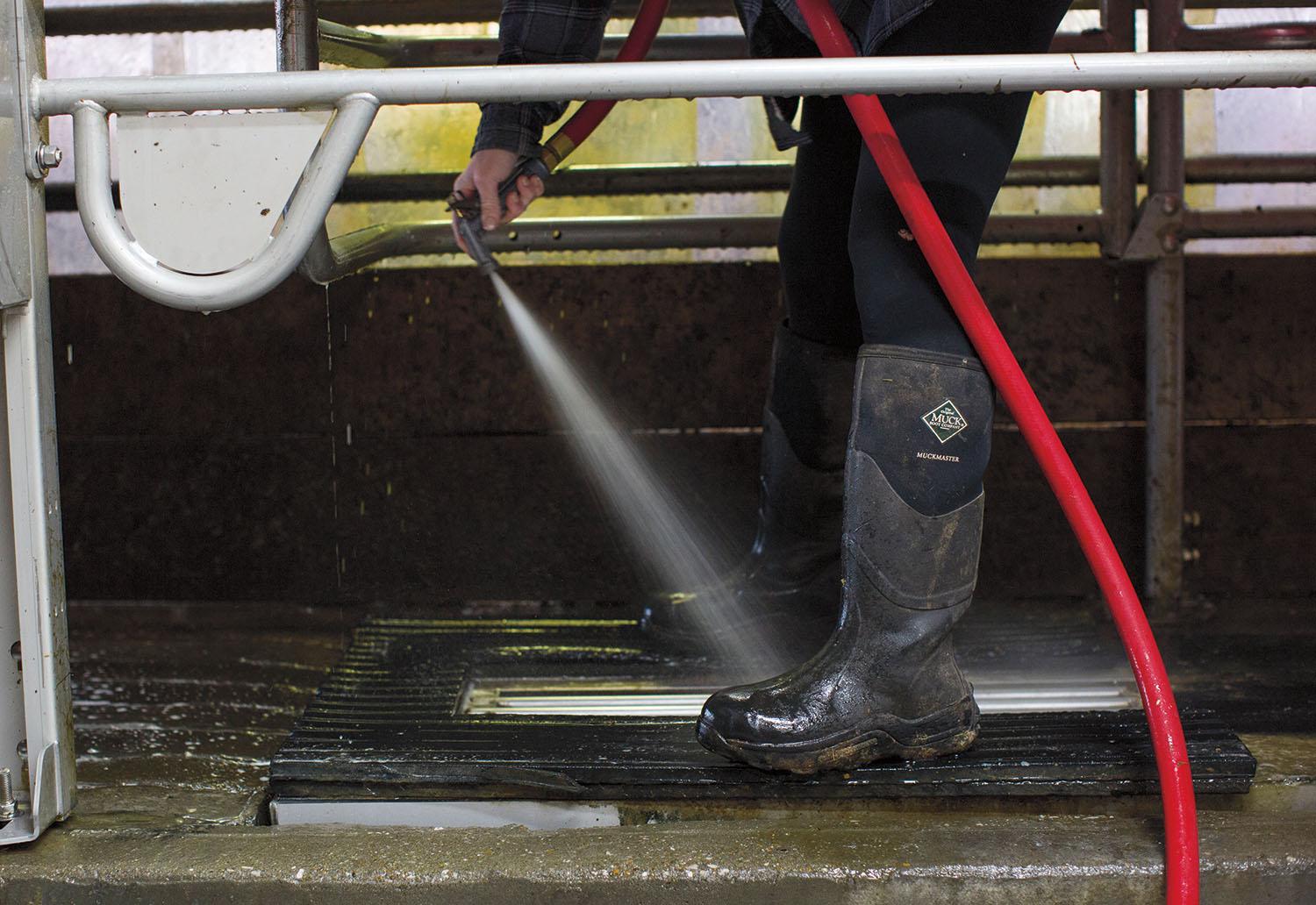 Another issue Baker pointed out was the immense cost of running Chaney’s. The cost of production for 100 pounds of milk is $20. The most they can profit off the same amount is $16. This forced Chaney’s to implement other means of business in order to keep the farm running. As such, creating and marketing Chaney’s Dairy Barn as a local destination was a major step for the business.

Now, school field trips and local events are held there throughout the year. Crowds come from miles around to catch a glimpse of a working farm and taste the sweet product of the Chaney family’s labor. This is especially true in the warmer months.
Brie Gatlin manages the making of ice cream at Chaney’s, and on her busiest of days she said she could run through hundreds of pounds of ice cream.

“I worked during the eclipse last year, and at one point our sink was barely able to drip water because it just couldn’t keep up,” she said. 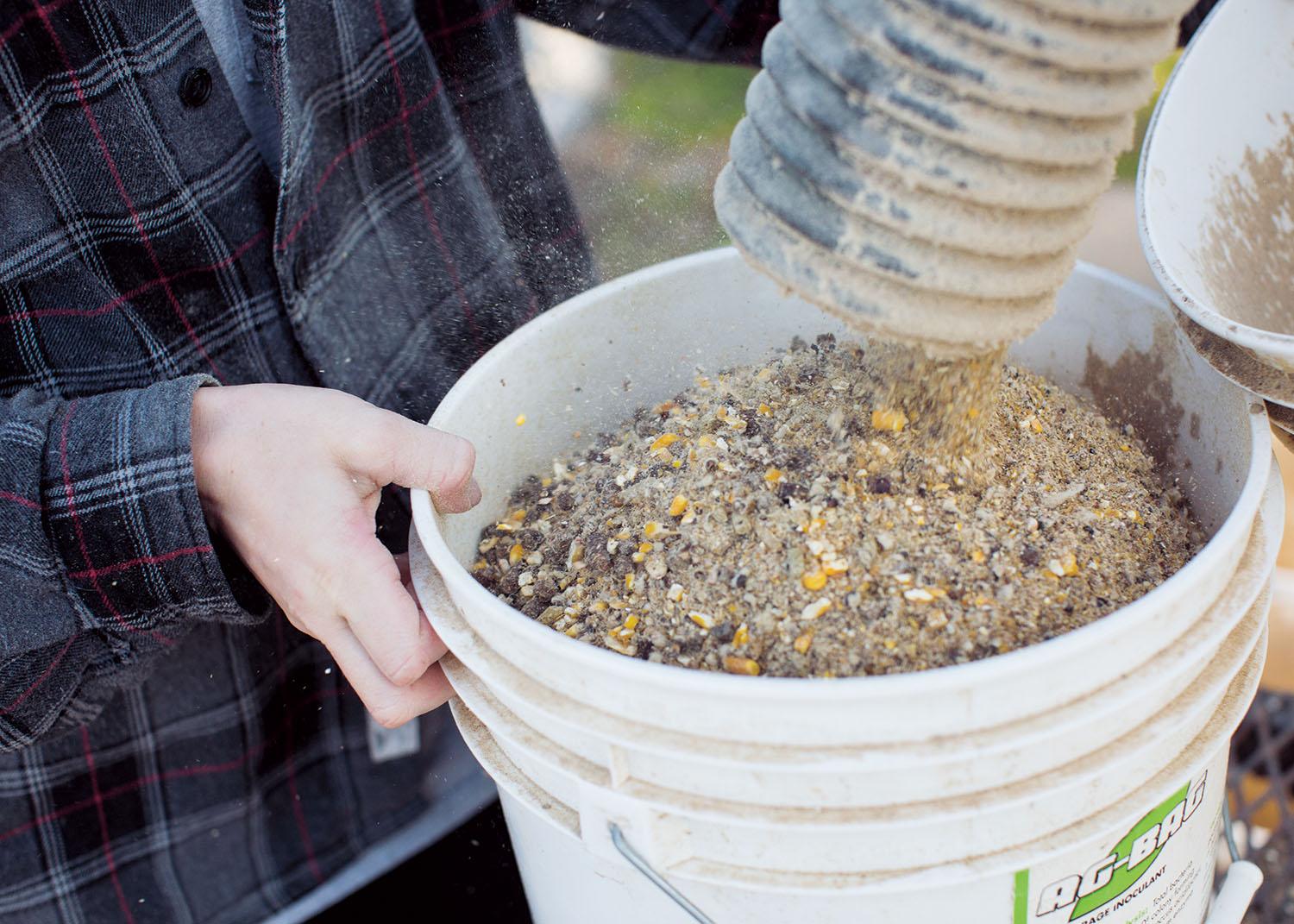 Dory Baker fills up buckets to feed growing calves at Chaney’s Dairy Barn. Baker spends most of her time on the farm caring for the cows. “I love it,” she said. “I dropped out of school to come work here.”

The family-run business has shared its close-knit feel with the rest of the Bowling Green community.

From being the site where thousands witnessed a celestial phenomenon, to selling ice cream in Diddle Arena at every home basketball game, as well as at countless visits across the community, Carl and Debra Chaney have cemented Chaney’s Dairy Barn in local life. It also received national attention when USA Today named it the number one ice cream parlor in Kentucky in 2008.

“We’re proud of what we’ve accomplished in 15 years, and I can’t wait to see what the next 15 has in store,” Carl Chaney said.