From the magazine: Redefining ability

A soft motorized hum, and suddenly there he was. Franklin senior Jacob Holt appeared in Downing Student Union with a friendly smile and a mind full of stories.

He quickly shared his origin tale that began, as he said, “out of wedlock in the summer of 1994.” He then moved into discussing his disability, explaining his type III osteogenesis, better known as “brittle bone disease.” Holt described how the disease essentially means that his bones break more easily than others’. He casually spoke about the countless times he has been cut apart and reassembled on the operating table.

“It’s a bit like being Humpty Dumpty,” Holt said.

Because of his disability, Holt uses a power chair — his “conduit to the world,” he said. 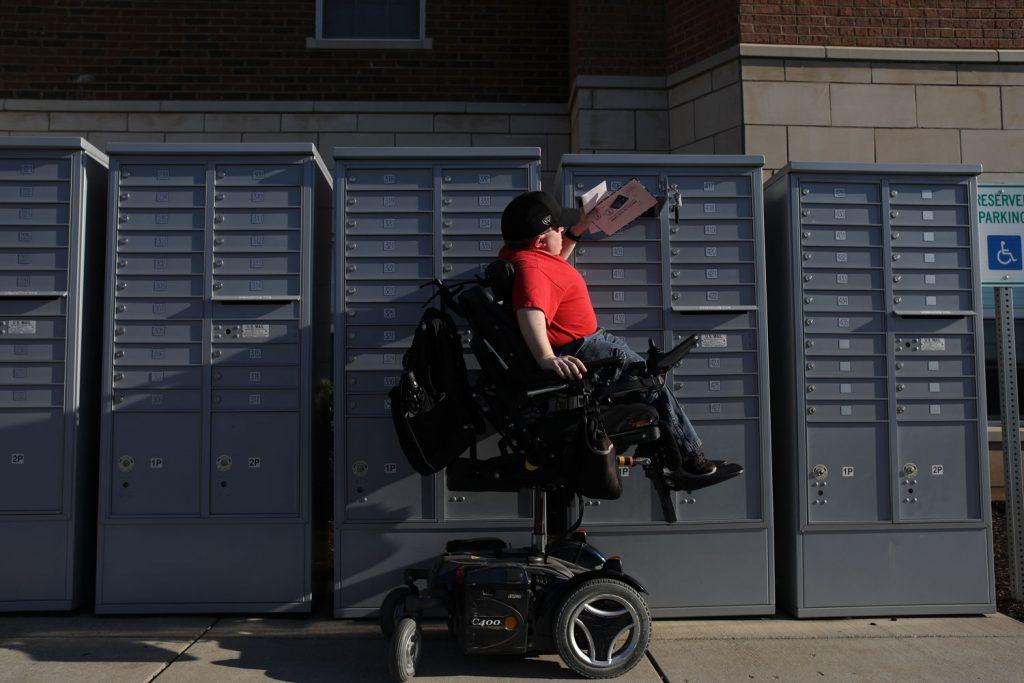 After grocery shopping, Jacob Holt raises his wheelchair to reach for his mailbox outside the Kentucky Street Apartments in Bowling Green on Feb. 27. Born with his disability, Holt has been in a wheelchair since he was two years old.

He discussed his chair some more, joking that it was nice because it reclined and therefore helped when the professor was being particularly dull. Even so, Holt also cited several occasions when the reliance on the chair was a struggle.

“It was pouring down rain, and I was up at Cherry Hall,” Holt said. “And I decided, I’m just going to tough it out and get down to my room — I only live in Southwest Hall. I get about halfway down, and my wheelchair dies. Stops. It’s pouring rain. It looks like I’ve just jumped in a pool. I’m soaked.”

Fortunately, the story did not end there. He went on to describe how two young men, one who for some unknown reason appeared shirtless, helped push Holt down to his dorm. He laughed as he recalled the incident and quickly went into another, this one involving a snapped wire and the WKU Police.

It was all very mundane to Holt. Even as he described a dilemma freshman year when there was not a men’s handicap restroom in the Fine Arts Center — where he happened to have a Colonnade class — Holt remained cheerful and said he was proud of the strides WKU has made in terms of accessibility.

“I’m proud of WKU for its willingness to change and to get better,” Holt said. “It’s really easy to get complacent, in life and as an organization … To be hungry and to want more is a difficult DNA to instill in an organization.”

Holt is aware of WKU’s steps toward change because he has been behind many of them, suggesting new ideas and continuing to be a voice for students with disabilities as president of the Residence Hall Association and vice president of Mastering Accessible Possibilities for Students, a club that falls under the Student Accessibility Resource Center. 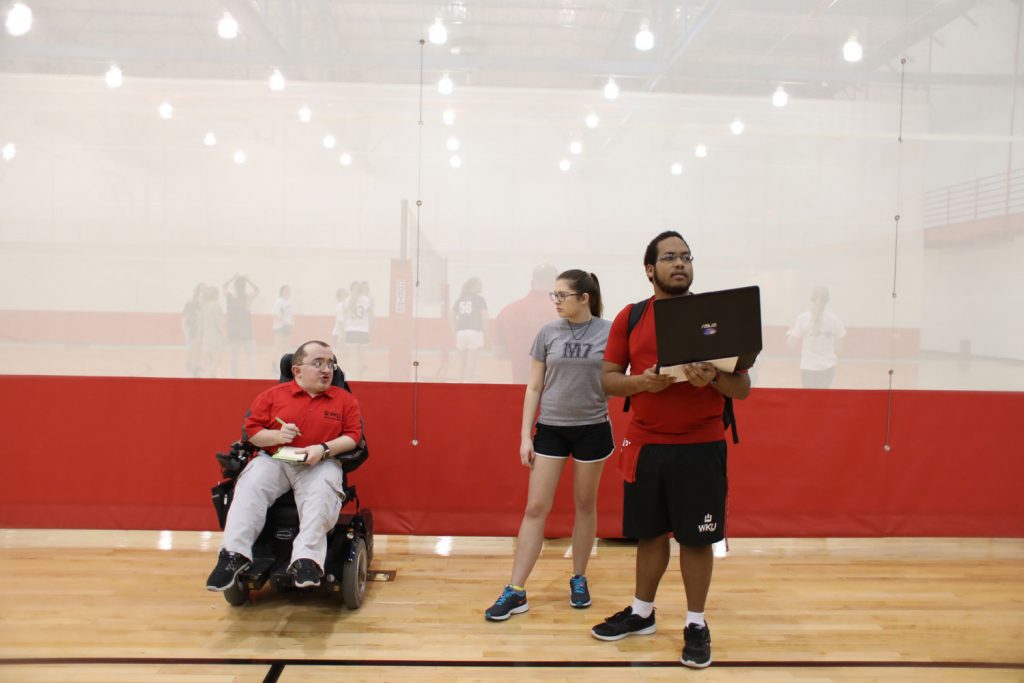 Jacob Holt, president of the Residence Hall Association, referees Big Red Volleyball at Preston Center with other RHA members, Elizabethtown freshman Elizabeth Viau and Henderson sophomore Kaylan Boyd, vice president of Resident Affairs. “I joined RHA when I was a freshman and needed something to do,” Holt said. “My RA knocked on my door and asked if I wanted to join Hall Council.”

His friend and MAPS President, Lakeside Park senior Michael Schilling, discussed some of those achievements, citing how instrumental Holt had been in getting the automatic door openers installed after the remodeling of DSU.

Like Holt, Schilling also has a disability. He is legally blind but said he hadn’t even heard that term until he was in high school.

“I was raised with the mindset that the disability doesn’t matter,” Schilling said. “You can always find a way to overcome it. And that’s definitely followed through into my adult life of just having a resilient attitude toward my disability.”

Like Holt, Schilling joked about some of his experiences at WKU, laughing off a time when he ran into a doorframe in Diddle Arena and a girl behind him yelled, “What are you, blind?” He said his only regret with that incident was that he didn’t get the girl’s number out of it.

“I should have thought of that,” Schilling said.

Schilling said he remains extremely optimistic and proud of WKU, despite the occasional struggles. He talked in detail about his love for campus as well as his love for SARC and the work they do. Schilling said his mentality of resilience has led him to become stronger through difficult experiences. He said being open and honest about his disability is one of the best ways to make connections and break down problematic assumptions.

Rebekah Taussig is a well-known voice on social media, where she advocates for body positivity and sheds light on people with disabilities. A fifth-year doctoral student at the University of Kansas, Taussig also talked about breaking down assumptions about those with disabilties. She too has faced them because of her disability that causes her to use a wheelchair most of the time.

“I think the hardest thing for me with disability is when people make assumptions about my experience,” Taussig said. “Just by existing in this particular body I’m sending you a message of brokenness somehow, and it’s jarring because I didn’t think I was doing that.”

Taussig has had her own specific experiences with inaccurate assumptions and said these assumptions could be alleviated with conversation and more representation in media such as TV, film and literature. 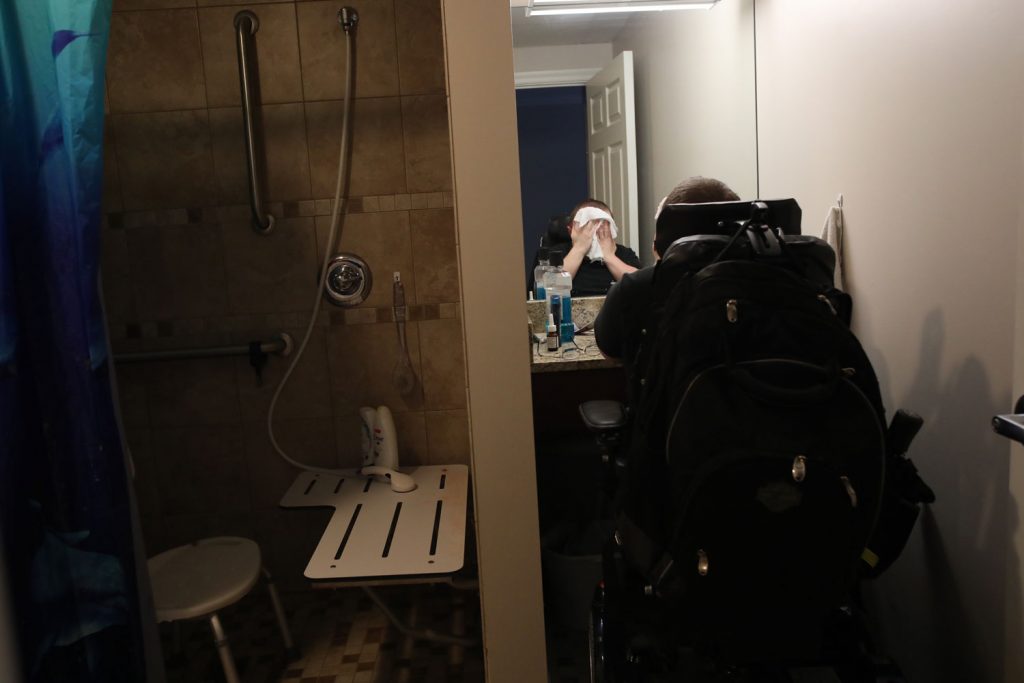 On the morning of March 1, Holt washes his face and prepares for a day of online classes. “What I have is genetic,” Holt said. “I have never lived a day without it. It’s there when I wake up and when I go to bed.”

Holt, Schilling and Taussig all similarly expressed that disability is specific to the person.

“There is an infinite number of ways disability can be experienced,” Taussig said.