From the magazine: Spells and spirit

After gathering water, chamomile, salt, lavender and blue and green candles, Kristen Darby, an Elizabethtown senior, meticulously placed each item in an arrangement according to the element in which they relate in the pentacle, a talisman or magical object, she painted on her kitchen table. A layer of purple paint still lingers behind a thin coat of white paint from the most recent time she painted it.

“I paint my table whenever I get anxious,” Darby said. “It’s calming for me.”

When she was ready to begin, she turned off the lights. Darby identifies as a Christian witch, and she was preparing for a spell.

Burning sage to first cleanse herself, her practice and her space of negativity, Darby began the spell by asking for prosperity and growth. She then turned to each element and asked for the same. Afterward, she flipped the lights back on, played a classic rock playlist from her phone and collected the herbs and spices in a mortar and pestle and ground them into a powder. The spell ended. There was no giant flame or smoke or giant book of spells. Bowling Green resident Tristan Storm said magic isn’t like what some people think.

“People think magic is grand with bringing people back to life or walking through fire,” Storm said. “But is more artistic and ritualistic.”

Darby intertwines her devout faith in God with her practice of witchcraft in such a way that the two, usually seen as at odds, seem to complement one another.

“I was born and raised in the New Apostolic faith,” Darby said. “I’ve been confirmed in it. I’m baptized. I still go to church every Sunday.”

The New Apostolic faith is an offshoot of Catholicism founded in Germany in 1863, according to the Apostolic Church USA website.

When Darby was 13 years old, her father became a priest at her local New Apostolic Church. As a child, she attended a private Catholic school, where books such as the Harry Potter, Percy Jackson and Olympians series and several other fiction books were banned. At the school, many subjects were seen as taboo, such as talk of other religions, LGBTQ+ issues and video games. 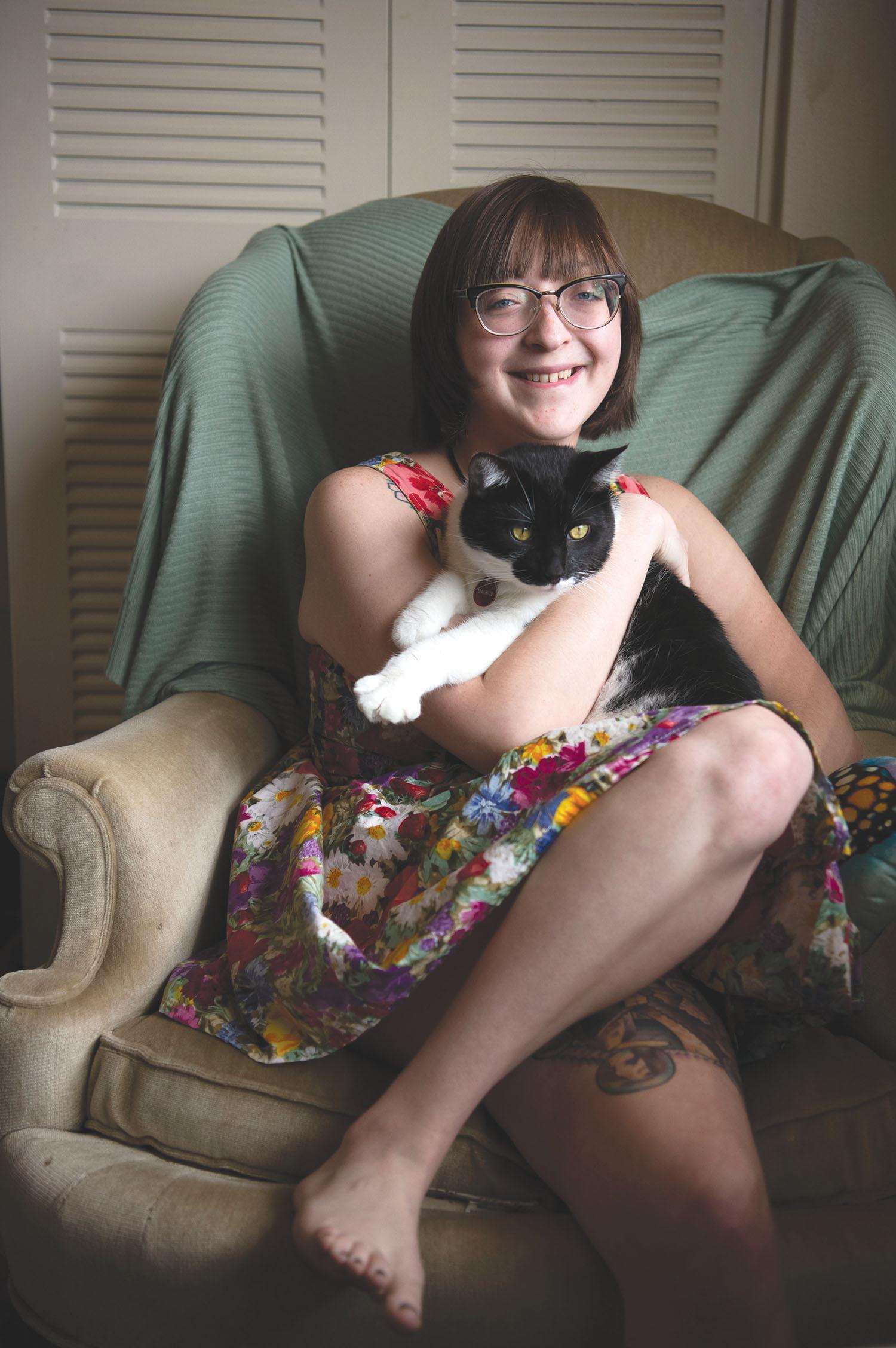 Elizabethtown senior Kristen Darby was born and raised Christian but started to practice witchcraft two to three years ago. “I get so much out of witchcraft that if someone were to be able to come to me and completely prove that I was all false and material, I would still practice because it’s helped me internally a lot,” Darby said. “I’m way happier than I used to be, and I’m way more confident. I think it gives you a kind of connection to your surroundings in a way that we don’t usually get.”

Due to the amount of restricted information, Darby sought knowledge anywhere she could find it.

“I was a nerdy child,” she said. “I was always reading books like the ‘Iliad’ and ‘Lord of the Rings.’ Because so many things were banned, anyone or anything with any knowledge at all was valuable.”

At the age of 14, Darby was first exposed to witchcraft.

“A girl at my church invited me to an Equinox celebration,” she said. “She told me that even though it does not technically involve the word ‘God,’ I could involve him if I wanted.”

For Darby, this concept of involving religion in a practice where religion was not usually thought to play a role has stuck with her throughout her life. She began to recognize the connections between witchcraft and God had been everywhere in literature, television and within her own religion. She explained that there are numerous themes that have been carried across several religions and are seen in witchcraft such as: the importance of the four elements of air, fire, earth and water; the mention of a trinity and rituals, including Catholic Mass; lighting candles for the dead; and baptism.

However, she did not begin to practice witchcraft until she experienced a test of faith at the age of 20. She had been in an unhappy relationship with her boyfriend for two years and had thought about ending the relationship numerous times.

“I remember crying in the shower and praying so hard to God for guidance,” Darby said. “I had a clear epiphany that if I truly loved him, I would stay and make things work.”

The next day, Darby discovered her boyfriend had been cheating on her. In that moment, Darby took steps away from God and Christianity. She felt lost and found herself being drawn to explore the once-taboo subject of witchcraft.

“With everyone I’ve ever met that practiced craft, it was all about yourself and your own power,” Darby said. “You were born with it. It was already in you.” 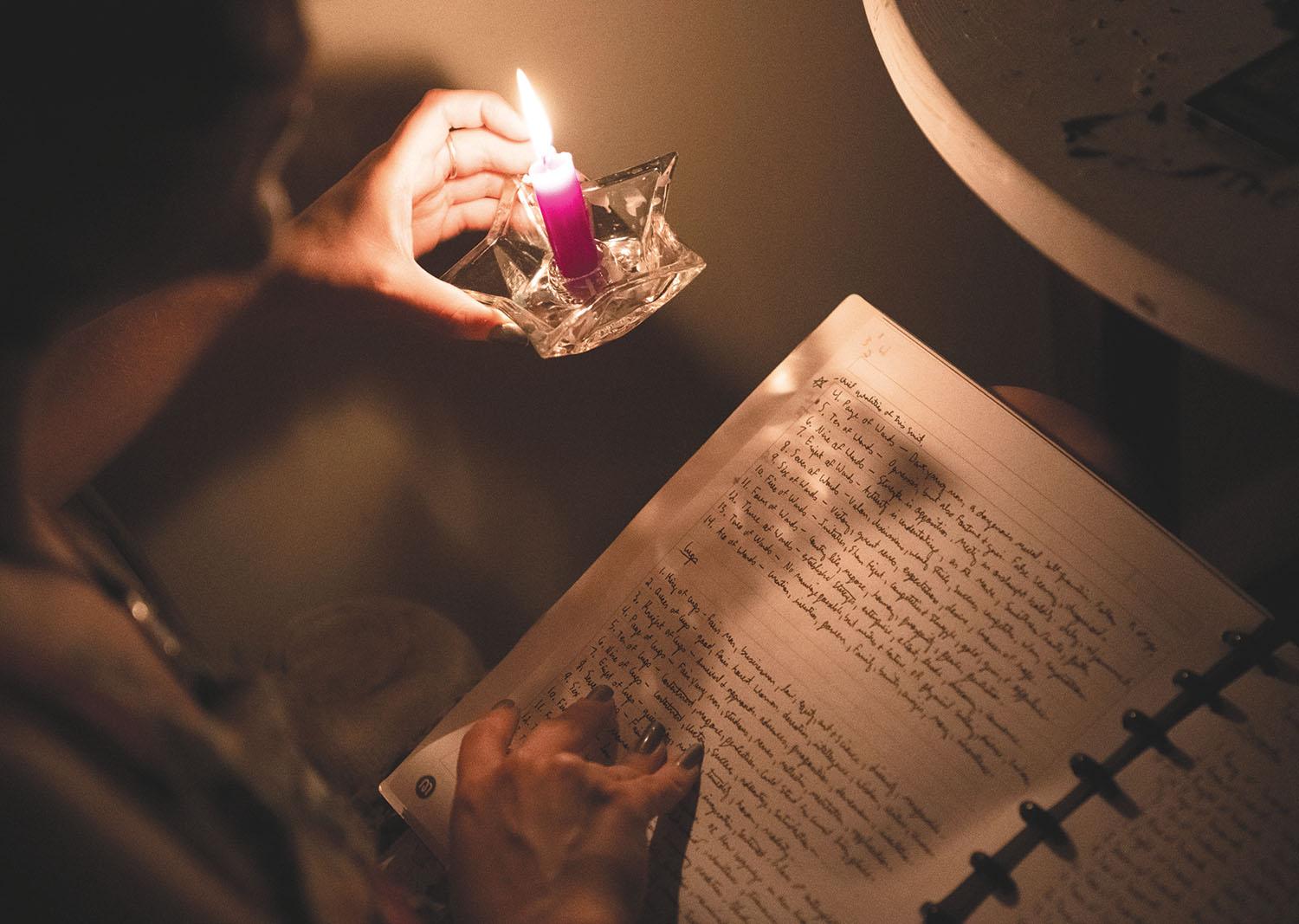 Darby looks over her writing and notes relating to a spell. She conducted the spell for prosperity and happiness.

As Darby first began to research and practice witchcraft by trying different spells and meditations, she thought back to her Christian faith and felt an intense amount of guilt. She thought she had turned her back on her faith. However, practicing witchcraft had allowed Darby to release her anxiety and past trauma and truly reflect on herself and the importance of all of her imperfections and flaws. Darby said she felt such an increase in her confidence and her understanding of herself and others that she could not give up witchcraft.

Darby continued to practice witchcraft and began to further reflect on her religion. “I realized Christianity and craft were all part of something bigger, encompassing all belief and religion,” she said. “They are both valid and don’t dispute each other.”

“I feel that most of the things I pray to God for are large goals, like my health and overall happiness,” she said. “But I use witchcraft for more practical things, like getting an ex-boyfriend to leave me alone.”

For Darby, there is no correct way to practice.

Hazel Rather, a graduate student from Owensboro, said everyone forms their own way to practice.

“You do research online and read books,” she said. “You can take what you like from what you read and how others practice. You can use it, change it and twist it however you want. It’s customizable and unique to everyone.”

Darby’s craft is based in elemental work. She uses tangible objects such as crystals, herbs, water and fire to materialize her faith in God, whom she believes created them. By providing herself this tangible layer to an intangible faith, she has been able to feel more at ease.

“Each day I go somewhere where I can put my hand on a stone, on something concrete,” she said. “I will just realize my place. And I’ll ask for help. I’ll say, ‘I want to be as strong, as abundant, as prosperous as this thing.’ I’ll do that for, like, all four elements, and just to sit in nature for a second, and feel the sun on my face — I’ll imagine that it is burning off all of the negative energy.”

Ashley Adler from Bowling Green identifies as agnostic and has participated in occasional spells with Darby. 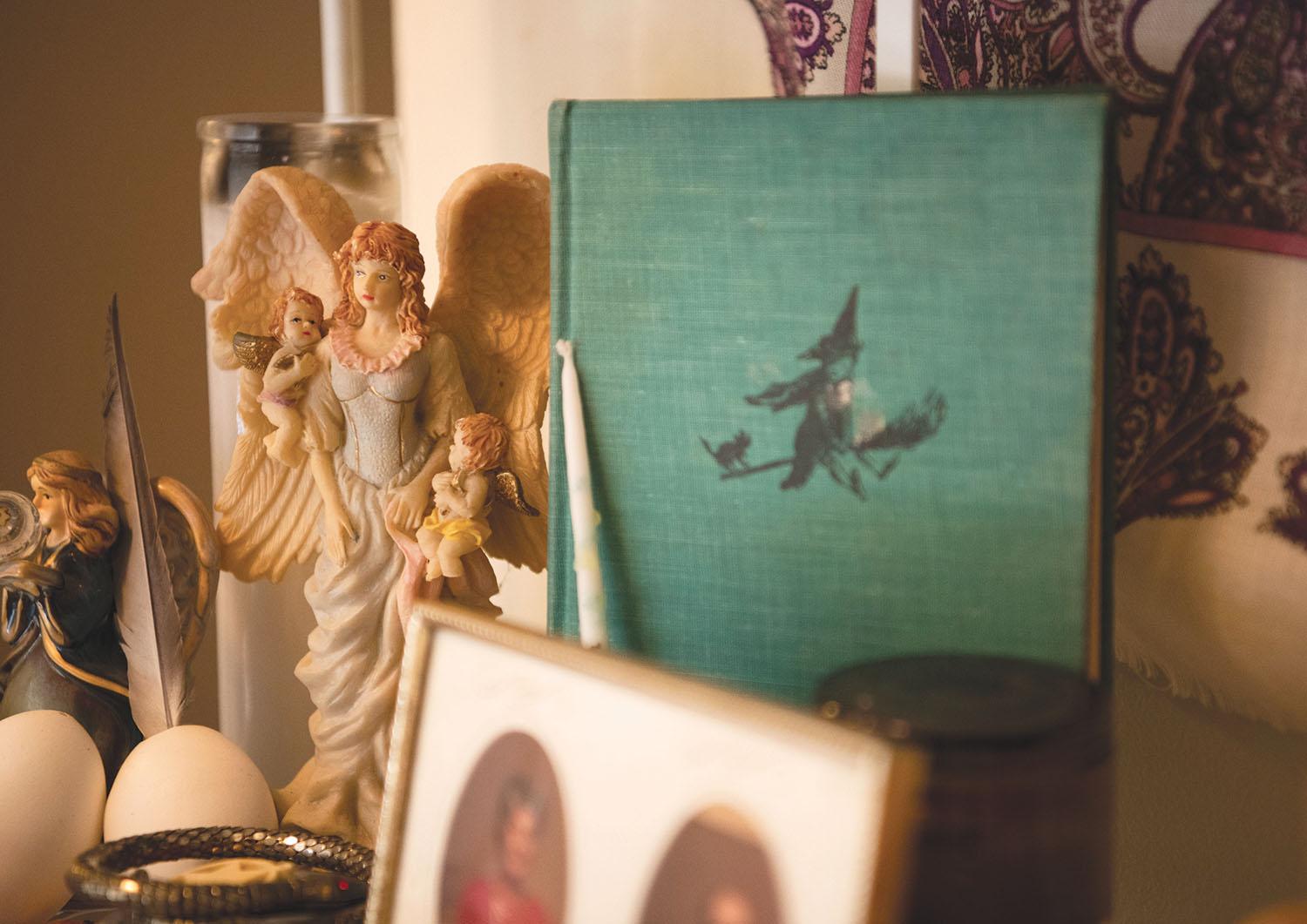 Kristen Darby’s altar in her apartment is reflective of her blend of Christianity and witchcraft. The angel figurines were in her room as a child and one was willed to her after the passing of her grandmother. Displayed are also books of spells and information on witchcraft.

“It put the power in your hands,” she said about the act of performing spells. “So as opposed to praying to a god, you realize you have your own power manifesting in you. You don’t have to ask someone to help you, and you don’t feel helpless.”

Often, the manifestation of craft comes from the intention of the person practicing.

“The biggest concept in craft is your intent,” Darby said. “It’s a faith in yourself rather than a faith in a deity, per se. But that doesn’t mean you can’t add deities to the mix.”

Darby said some pagans worship Greek and Roman gods and other deities, for example.

“Some still worship God; some worship others, and some worship not at all,” Darby said. “But the craft itself is a product of you and your intent and your will.”

Darby said if she were to have a conversation with God today, she believes he would be proud she is practicing her faith stronger than ever before in her life.

“Before I picked up craft, I would pray to God, and I’d be very submissive because we’re taught to fear and love God,” she said. “But I’ve learned through this not to fear him, but that it’s more of a partnership.”

That being so, her faith not only in God but also in herself and the world around her has increased.

“A lot of people don’t want to associate with witchcraft, but I wish everyone would find something that gives them the confidence and reassurance that faith in the most general sense of the word has given me,” Darby said. “Faith in yourself is key.” 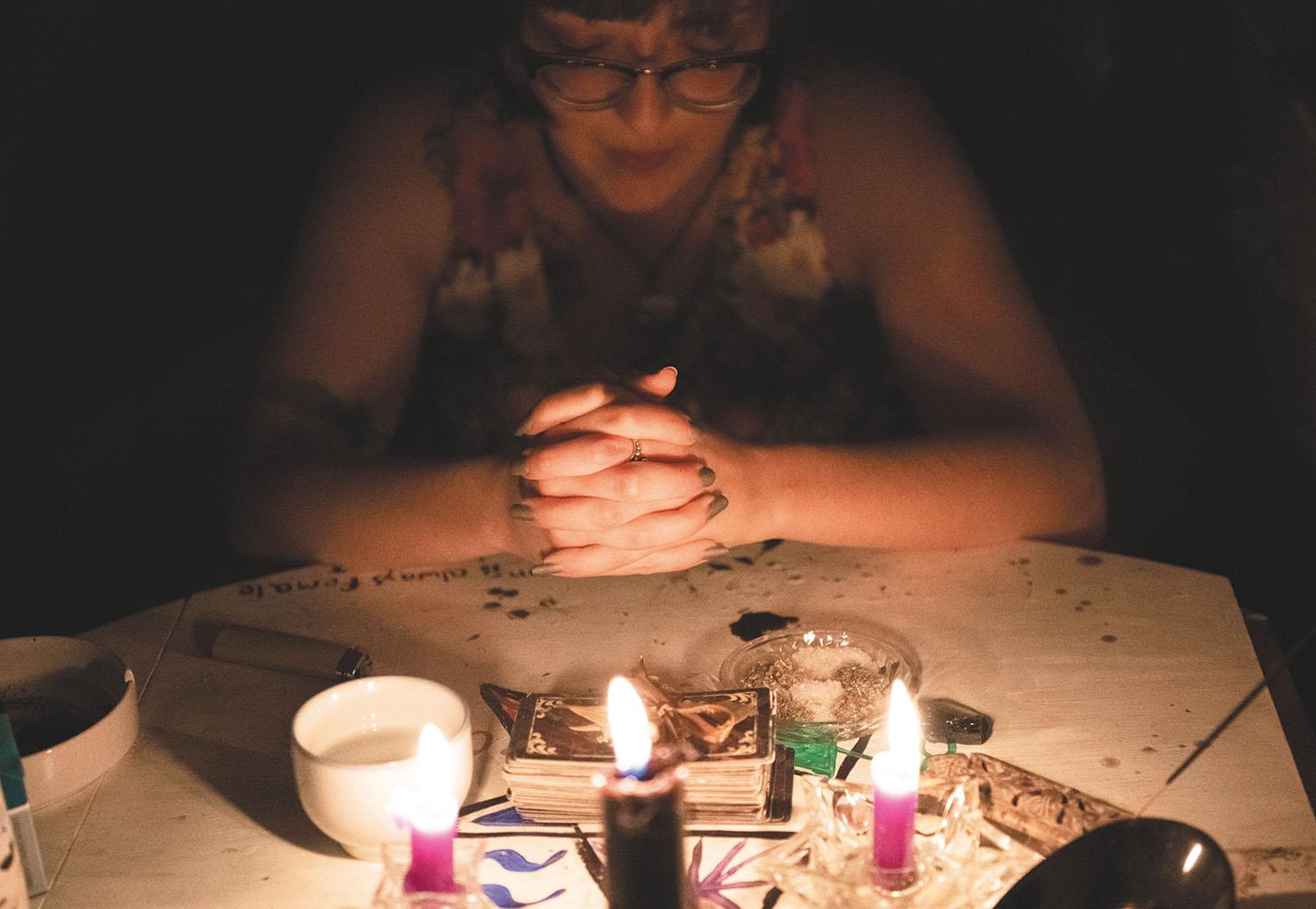 Darby prays for happiness, abundance and growth to the four elements, the triune goddess and the holy trinity during a spell for prosperity in her apartment. “The whole point of witchcraft is if you believe, then so it is,” she said. “It’s all about your intent. If you do a spell and you’re like, ‘I intend to be more confident,’ and you go about your day the next day, remembering what you did and how much will you put into that, you will be. If you believe that you are and that it worked.”