From the magazine: Too often silenced

A crowd of hundreds marched from the First Christian Church through the downtown square to Christ Episcopal Church in Bowling Green with signs and candles. Signs were covered in words of encouragement, such as “All are welcome here” and “Unity in the Community.” Police warned the marchers to ignore any outside interference, but there was none.

People from many different backgrounds marched together on Feb. 4 with uplifting chants and attitudes to show their support for a diverse community.

President Trump issued an executive order in late January banning travel from seven predominately Muslim countries for 90 days and entrance to all refugees for 120 days. Sadness and fear were common reactions throughout the nation, and both were especially felt in Bowling Green where nearly 14 percent of residents are born outside of the United States, according to the 2015 U.S. Census Bureau.

This includes countries affected by the executive order, such as Somalia, where Mohamed Dahir was born. Dahir came as a refugee to live in the Bowling Green in 2012.

“I’m very sad because I haven’t seen my family in 11 years,” Dahir said. “And now the president doesn’t allow my family to come here, and I can’t go there to visit them. I’d like to join my family.”

A chance to be heard

Bella Mukonyora, a WKU religious studies professor, can relate to this situation on a personal level. Mukonyora, originally from Zimbabwe, moved to the United States in 2001 as a refugee.

“Some of us have always lived on the margins,” Mukonyora said. “So, I kind of empathize with that feeling that you don’t belong, and worse, that people do not want you here.”

Mukonyora came to the United States as a Fulbright Scholar after studying at University of Oxford. She said she felt insecure throughout the vetting process, speaking with Homeland Security and providing evidence that she was at risk if she went back to her home in Zimbabwe.

“It’s a very lonesome process, and showing them the love that goes with religion is what it’s all about,” Mukonyora said.

Covington began holding “Hearing From Voices Too Often Silenced” meetings in January 2017. He wanted to open a forum for anyone in the community to come speak and listen to marginalized groups that do not usually get the chance to voice their concerns. Covington said he saw people were concerned after the election – a common theme even among people of different social classes.

“Largely there is just some sort of general sense in our society of frustration or confusion or uncertainty of what’s likely to happen next,” Covington said. “So to talk about people’s feelings seemed like it would be an important and valuable thing.”

The first meeting on Jan. 18 was held in the church common area in a circle of chairs pulled up by each person as they entered and sat down. People representing several different sectors of the city were in attendance, including the mayor of Bowling Green, Bruce Wilkerson and city commissioners Slim Nash and Joe Denning. Several WKU professors from the history, English and religious studies departments were also present.

History professor Patricia Minter said her impression from the discussions at the meeting was that people feel excluded and are very angry about it. Several people voiced their anger at racial and religious divisions in Bowling Green. City Commissioner Denning seemed confused by the discourse, and he replied with the suggestion that people become more involved by attending the commission meetings.

Minter said she felt the city commissioners did not receive this criticism of the city’s lack of inclusivity well, and they pushed back.

Covington said he also saw that people were sharing their feelings of anger, but he did not think this was a bad thing.

“An initial expression of anger probably is appropriate,” Covington said. “People are angry and upset and the next step is to figure out what we can do about it and how we can be mutually supportive.”

While the meetings are associated with the change in presidential administration, Covington said these feelings have been around for a long time and run deeper than pointing fingers at the Trump administration. Even before the election, policies regarding immigration and accepting diversity were topics of controversy. Many people expressed concern for Trump’s proposed ideas, which included walls, deportations and immigration bans. 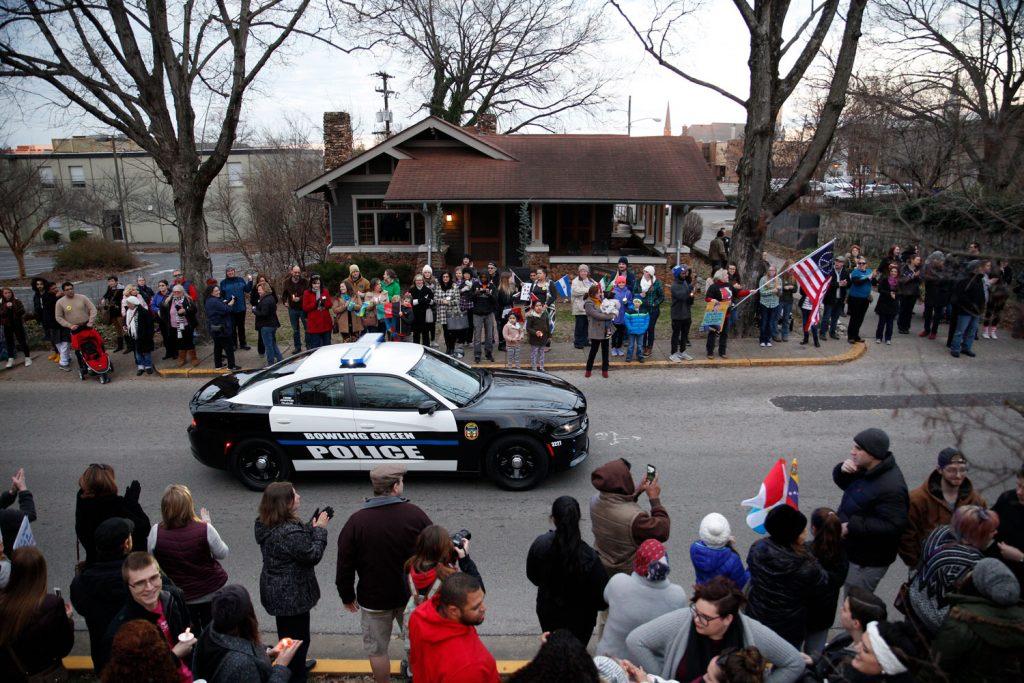 Participants in the Unity Walk crowd the streets, cheering for the Bowling Green Police Department and thanking them for their help directing traffic during the walk. The walk started at First Christian Church and went through the streets of the square, bringing together hundreds of Bowling Green residents.

In order to address these feelings and proclaim dedication to inclusivity, the First Christian Church, Christ Episcopal Church, the Islamic Center and the International Center came together to hold the Unity Walk on Feb. 4. These groups organized the march to directly express their opposition to the president’s initial executive order.

The path of the Unity Walk flowed through the downtown area. The crowd marched down State Street, around Fountain Square Park and up College Street. 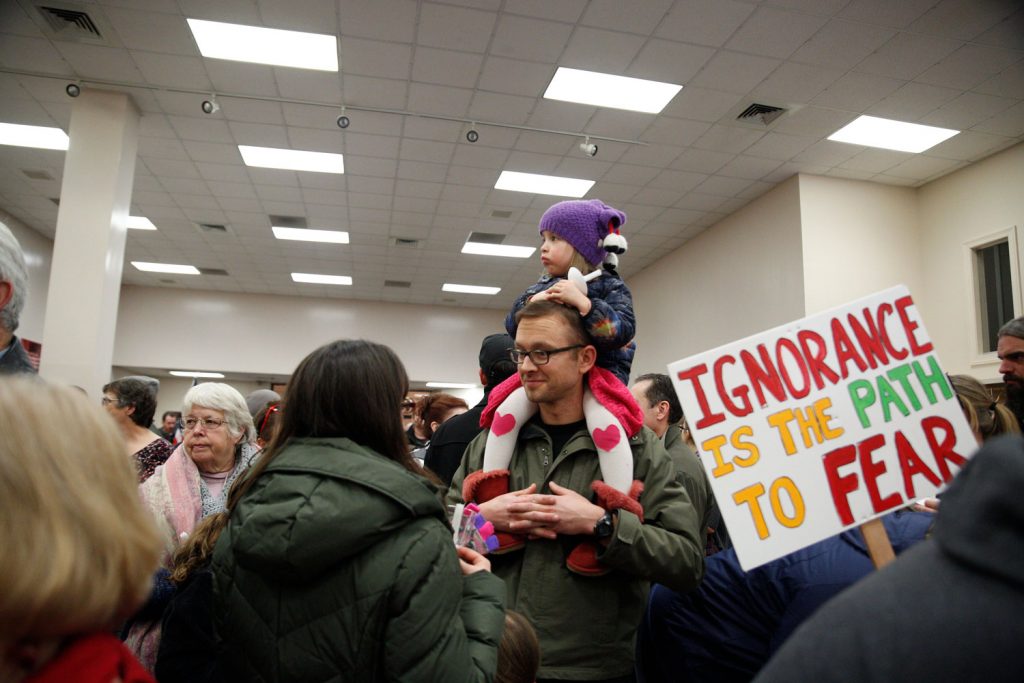 WKU professor Jeffery Miner and his daughter await the start of the Bowling Green Unity Walk. The walk brought together students, faculty and staff, as well as members of the community.

Many participating in the Unity Walk were there for personal reasons.

Amber Ortiz, a Bowling Green immigration lawyer, has mixed-race children. She said she attended the march because she knows what immigrants go through and also to promote acceptance for the sake of her children.

“If we’re not all together, that’s going to affect their future as well,” Ortiz said. “We’re all immigrants, so it’s important for us all to come together.”

Gatton Academy senior Rhiannon Connor said she attended the march to show support for the diverse community coming together outside of campus. 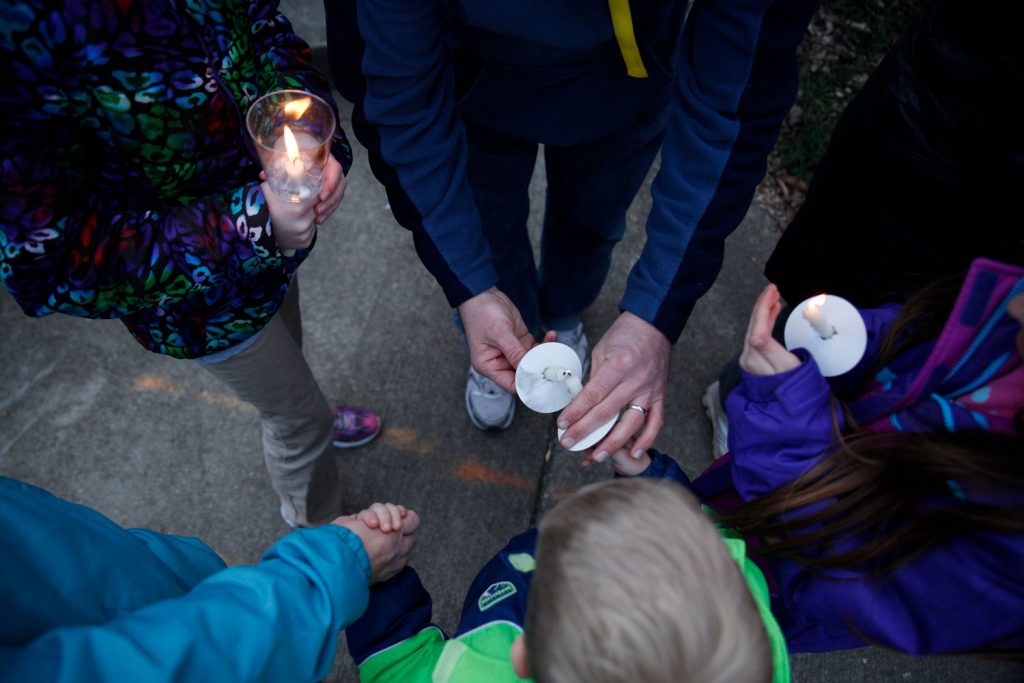 Bowling Green residents light candles in preparation for the walk. “We are here today to tell the truth,” said Megan Huston, a senior minister of First Christian Church. “To remember who we really are as a community and to demonstrate to those who may be watching that we love our neighbors.”

The immigration debate in the U.S. remains ongoing. On March 6, Trump issued a slightly revised travel ban. The changes were made to shield the order from legal obstacles, and they included removing Iraq from the list of banned countries in order to circumvent issues regarding foreign policy with the country.

In the revised edition Trump defended his first order, stating, “Executive Order 13769 did not provide a basis for discriminating for or against members of any particular religion.”

To address ongoing concerns about the matter, the “Hearing From Voices Too Often Silenced” meetings are expected to continue at the Presbyterian Church of Bowling Green. Covington said he hopes this is just the start of bridging gaps between Christian churches, marginalized people and the larger community to help people feel accepted.