Standing at 5-feet-11-inches with mom jeans and subtle pink eyeliner, Ellie Melin sits between Matt Rossoll and Samuel Hadden as they play “The Dating Game.” Except Melin is terrified of ducks, Rossoll can’t stop doing handstands and Hadden chooses not to use his hands. This makes Logan Mills’ choice of going on a date with contestant 1, 2 or 3 even more difficult.

The audience jeers with laughter and applauds when Mills correctly guesses the troupe’s quirks. After all, it’s just improv.

Improv, short for improvisation, is comedy that is made up on the spot without being scripted or rehearsed. Often paired with audience participation, it is more of an experience than a matter of theatrics.

Happy Gas Improv, which Mellin said is the longest-running improv troupe in Kentucky, is comprised of 11 WKU students. Happy Gas, derived from the original name Gordon’s Anonymous Slap, started in 1999 and is largely student-run.

“We have a sponsor,” said Melin, a sophomore from Jeffersonville, Indiana. “But we mostly do everything on our own. We run our own practices and host our own shows.”

From practices to shows, the improv group functions solely by the hands of its student members. 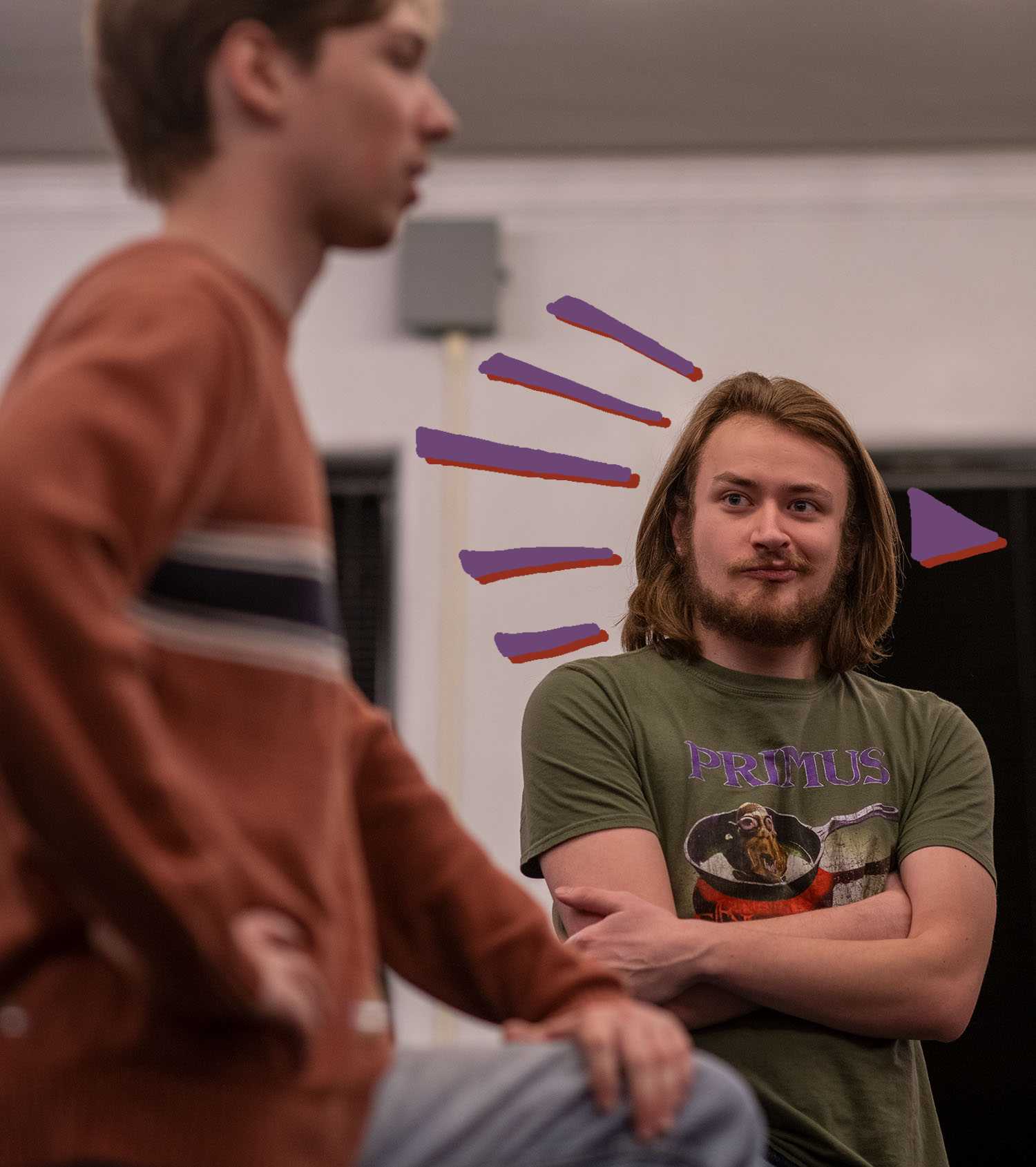 Matthew Kerman, a WKU alumnus from Shepherdsville and Happy Gas member, contributes to the Interrogation game that produces detailed clues from the interrogators to the person in question who does not know the “crime” they have done, but to get them to figure out the crime. This game allows the members to work on characters and detailed dialogue.

“We love being able to work with the university, and we have a great relationship with it,” said Jacob Chamberlain, Louisville senior and Happy Gas president. “But we have a lot of freedom since we aren’t officially a WKU group.”

At practices, the team plays games out of their binder of games, usually practicing games that have to do with the theme of the upcoming show. For the Valentine’s Day show on Feb. 13, they practiced “The Dating Game” and “Honey, How Was Your Day?”

“We love adding new games,” Melin said. “We watch ‘Saturday Night Live’ or ‘Whose Line Is It Anyway?’ and add new games we like to the binder.”

The troupe practices twice a week, but that’s just the official members. Initiates have their own practices.

“This is my first full semester,” Melin said. “I was an initiate last semester, and I was the only girl who made it.”

Melin said that not everyone who is an initiate makes the troupe. Initiates try out at the beginning of the semester, and then they practice until the end of the semester to find out whether or not they get to stay in the troupe or not. Initiates are not permitted to perform until they become full members either. 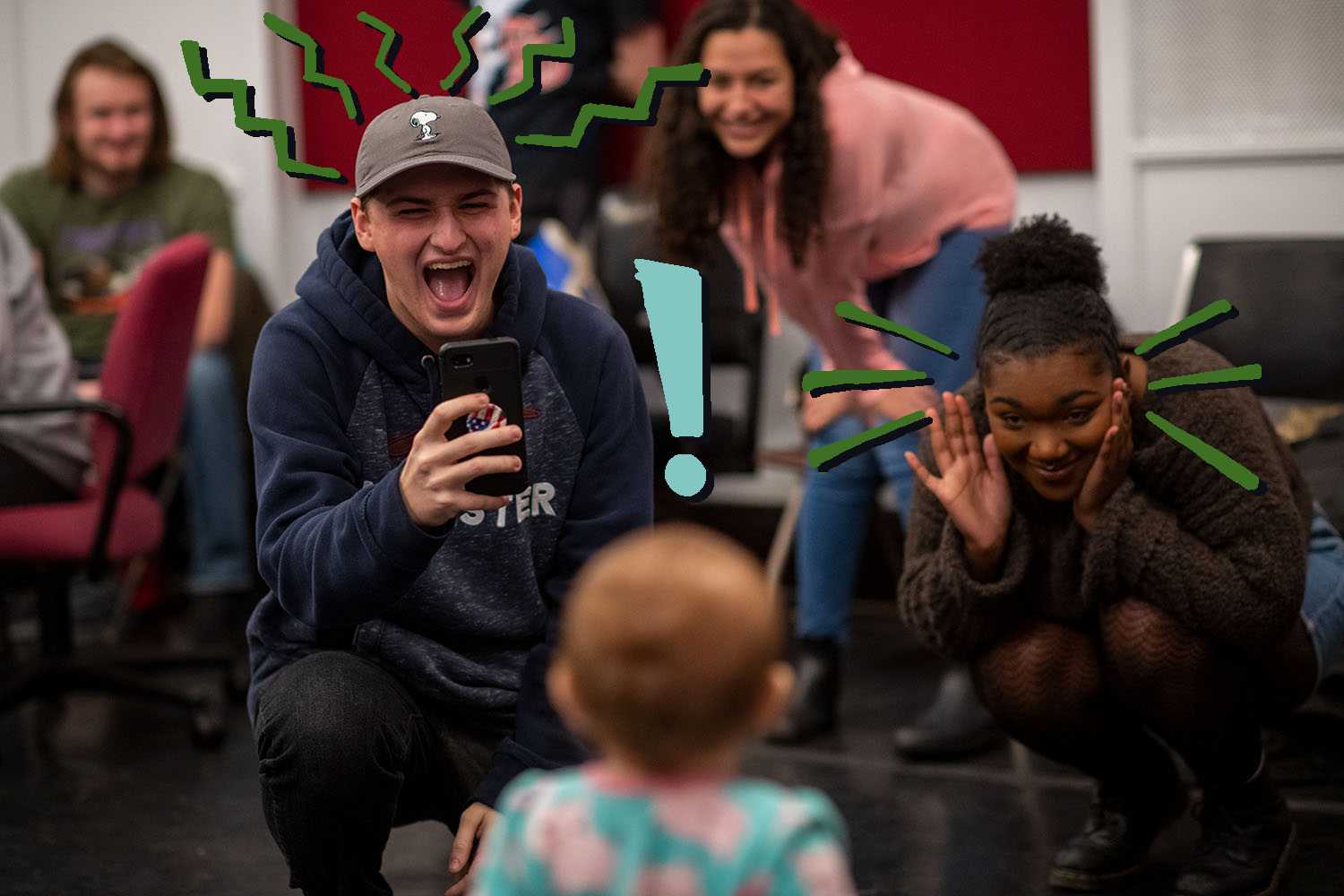 The initiates are taught by upperclassmen, as the troupe is mostly student-led. The practices are mostly about the new actors becoming friends, Melin said.

“As a team, you have to trust your partners,” Melin said. “The most important part of improv is listening to each other.”

In a student-led group, listening to each other can be difficult, but the board tries to keep the team together. Chamberlain, Peyton Montgomery, treasurer and Louisville senior, and the PR team of Rossoll and Chase Bennett help push the team forward.

“There’s always a level of stress attached to leadership positions, but it’s alleviated by all of the positives that come with student-run organizations,” Chamberlain said. “A key aspect of improv is the ability to agree, accept and affirm. I’m able to work with the team so we can figure out how to operate best together.”

While listening to each other is important, Melin said improv is largely skill-based, meaning that there are some techniques to be learned throughout the course of initiation.

“You have to always say ‘yes!’” Melin said. “You have to listen to your teammates, ready to have ideas that they can roll off of. Everyone needs to be saying, ‘yes, and.’” 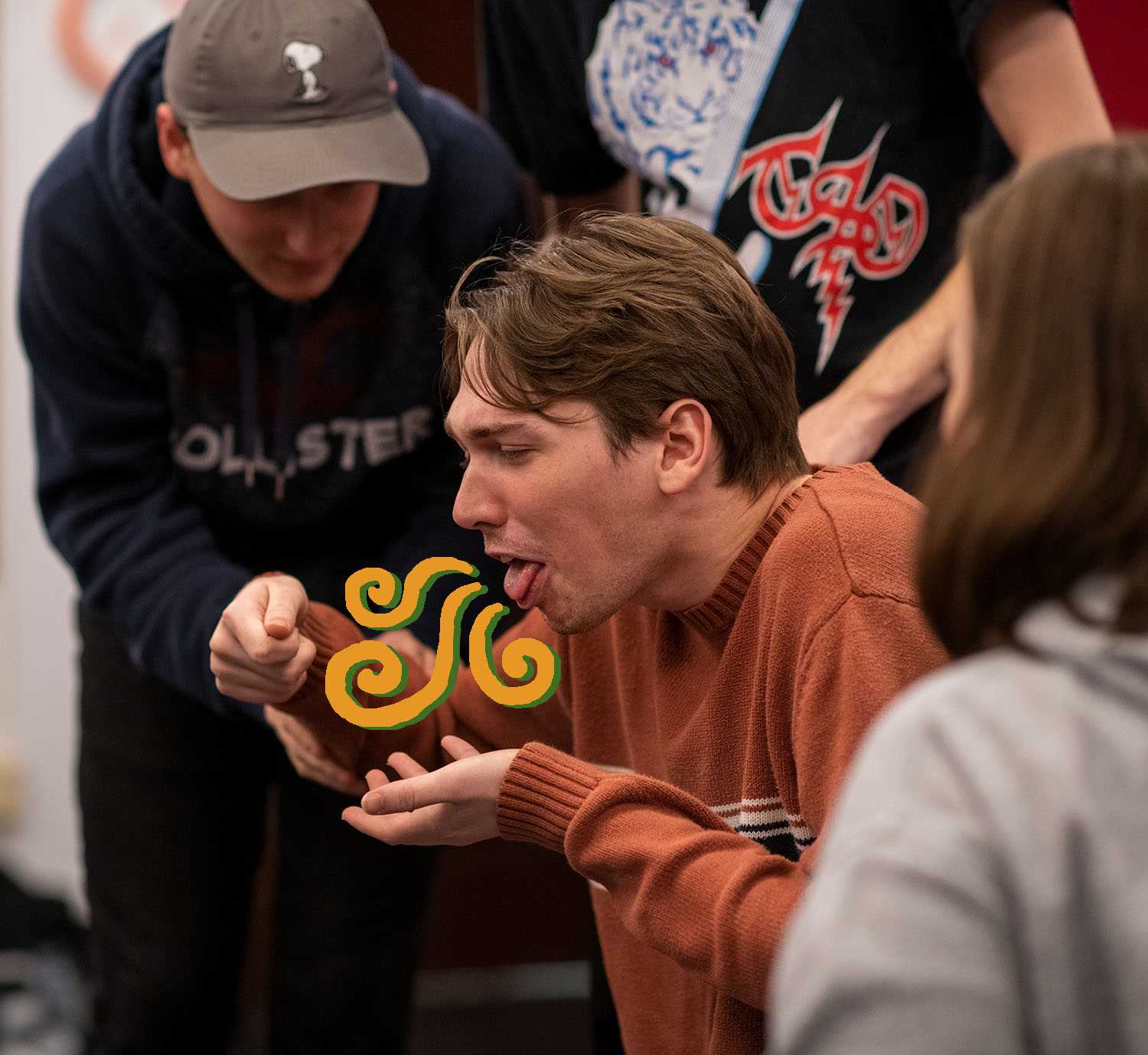 Island sophomore Chase Bennett improvs a character called Bobert the alien who loves to consume tree bark in the game “Movie” which simulates and restricts the group to a theme, situation and characters. “There is no playing Bobert,” Bennet said. “You just become Bobert. When being a character, it is just building details naturally and utilizing those details to further your character. I don’t filter — I just do what Bobert would do based on what I have gathered. I was just being the best Bobert I could be.”

The troupe practices twice a week, learning how to get better at saying “yes, and” to everything that a teammate says so that the improv never falters. Practices also serve as a team-building exercise, helping create the charisma and chemistry that the actors need to perform coherently.

“Happy Gas provided me with a close-knit family at WKU, which is something I didn’t have my freshman year,” Montgomery said. “Yes, our main goal is to perform improv comedy for the public, but we also strive to help ourselves and help each other grow as performers, artists and individuals.”

Even beyond performing improv, Happy Gas has taught its members a lot about life for the past 21 years.

“Happy Gas has helped me come out of my shell a lot,” Melin admitted. “I’ve learned to make a friend everywhere I go. I can make anyone laugh.”

While Happy Gas has positively impacted Melin, she doesn’t forget that women in comedy are hard to find. Out of 11 members, the troupe only has four women this semester after Melin joined at the end of 2019.

“Happy Gas has given me a place to get my creative energies out and flowing,” Montgomery said. “Of course, not everything we do is peak comedy, but I am always thankful for the time shared with these individuals.” 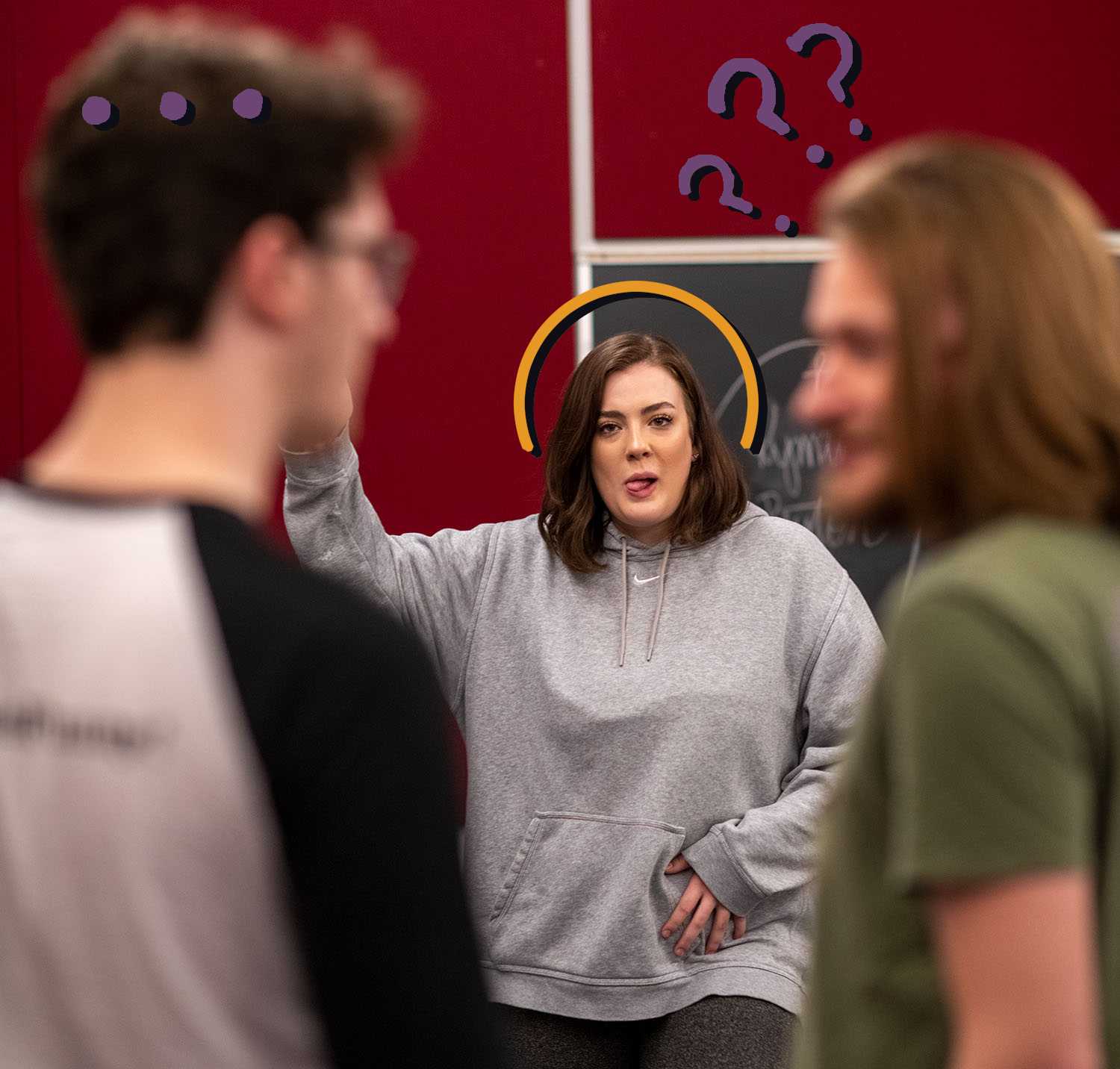 Jefferson sophomore Ellie Melin makes people laugh during “Good Thing/Bad Thing,” a group discussion for Happy Gas members to talk over the positive and negative aspects of the most recent game. This discussion improves future performances of the game.

Regardless of this, Happy Gas has benefited the troupe in ways that they never thought possible.

“Being in a leadership position for Happy Gas is something I’ve wanted to do since the first show I saw, so the fun and the gratitude will always outweigh any stress,” Chamberlain said.

The improv troupe has reached above and beyond for everyone involved, and now it’s a staple of art at WKU.

“Happy Gas is one of those reasons that I know that I need to be here,” Melin said. “Art is really important in this region because it’s not as recognized, but there are talented kids around here. And my art really turned around my college experience.”

Happy Gas Improv is currently on a dormitory tour for the remainder of the spring 2020 semester. Follow their social media to see when they’re coming to a dorm near you.