The costumes, the songs, the sex — each year, “The Rocky Horror Picture Show” combines these elements, drawing crowds in theaters all over the country on Halloween night. But there is more to this show than meets the outsider’s eye. This year, the Talisman took a look inside Rocky Horror. 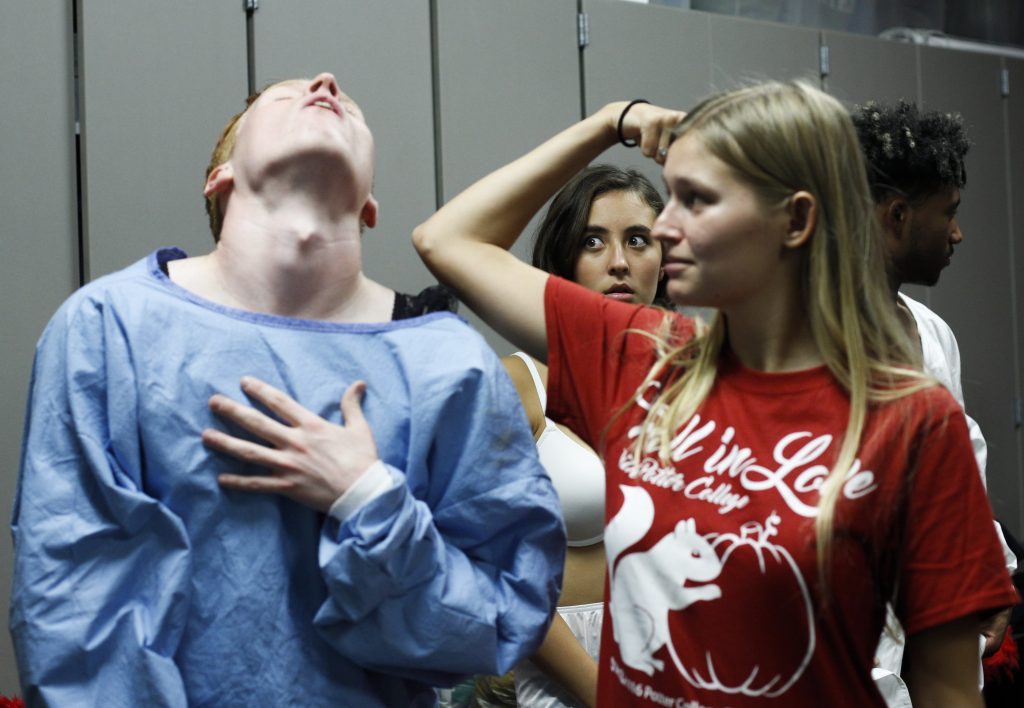 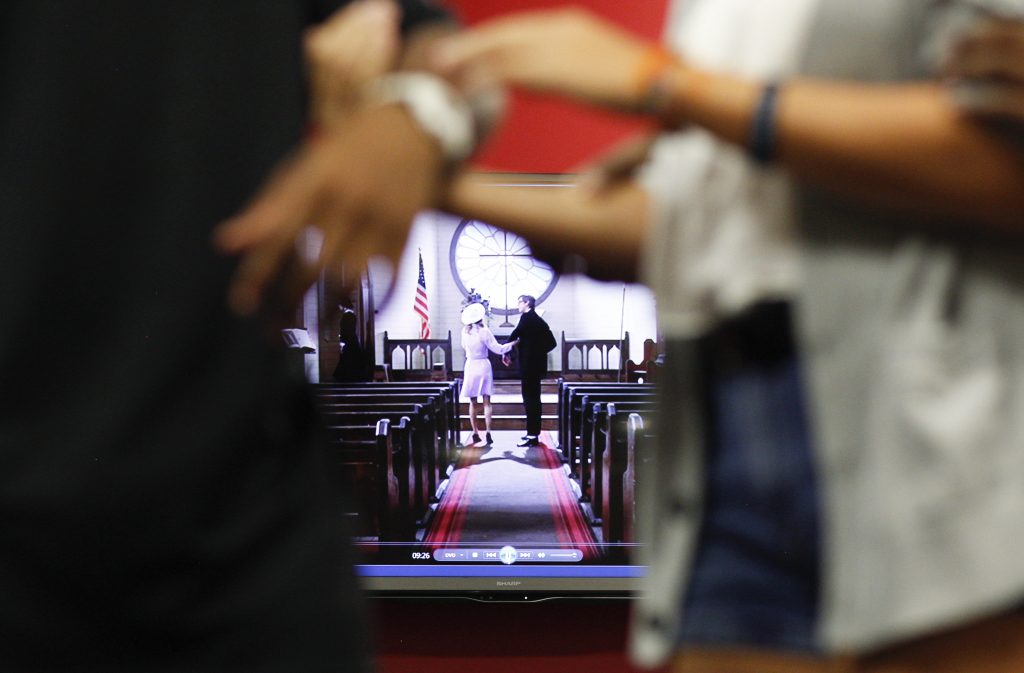 Nasato and Dejon Michael McClure, a Louisville freshman, rehearse the opening scene of Rocky Horror Picture Show. Each year the cult film, was reenacted in front of a live studio audience. Photo by Mhari Shaw. 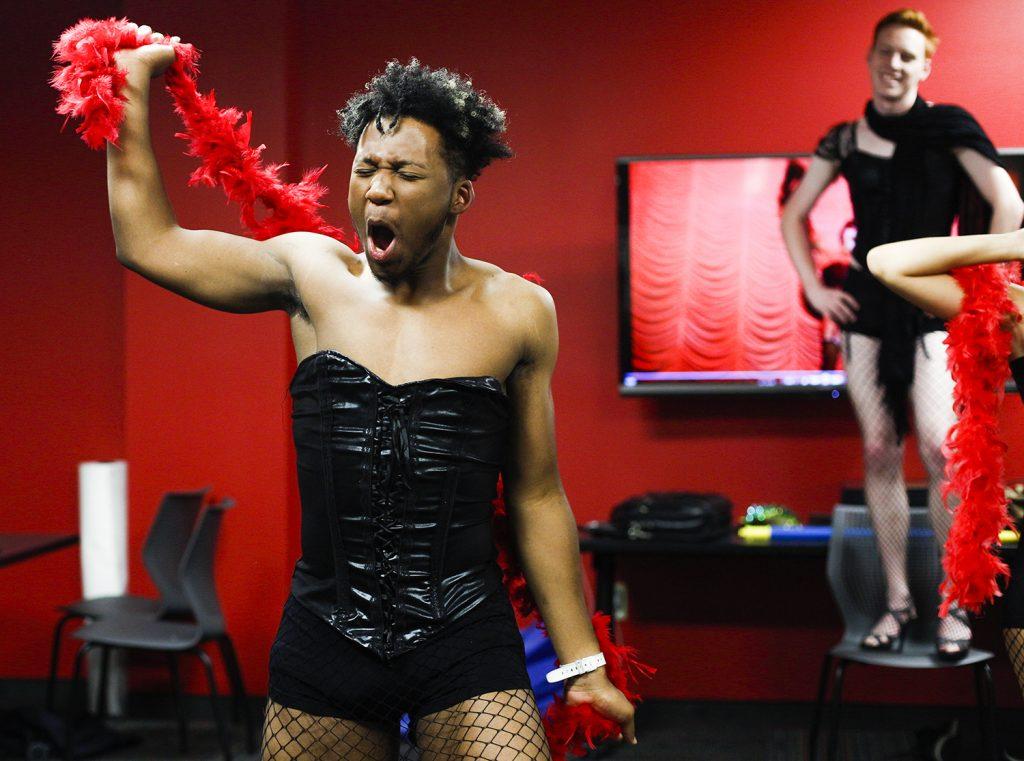 McClure practices the final dance of the film Rocky Horror Picture Show. This was McClure’s first time performing in this show. He played the role of Brad Majors. Photo by Mhari Shaw.

A loud, energetic crowd filled the Capitol Arts Center in downtown Bowling Green from top to bottom. Their chants and calls boomed through the room and all the way backstage, where the actors awaited their debut.

For some, performing this show was old hat, but for others, a rush of first-time excitement seemed to well up inside. As those quintessential, Rocky Horror red lips appeared on the projection screen, the audience’s chanting grew louder. The actors took their final deep breaths before finally facing the scantily-dressed crowd.

Each Halloween, the WKU Campus Activities Board presents a live performance of Rocky Horror at the Capitol Arts Center, and this year was no different. After over a month of preparation, a group of students performed the show in front of a sold-out crowd.

“The Rocky Horror Picture Show,” which originally debuted on film in 1975, is a musical known for its revealing costumes, risque content and slightly obsessive fan-base, said Dexter Crowdus, a Louisville senior. Campus Activities Board’s late night novelty chair and co-director of the show. Despite the glitz and sensuality, Crowdus said the show’s importance lies in the togetherness and acceptance between the cast and the audience.

“The cast has to be like basically naked together, so they need to be able to be comfortable and weirded out and still be able to function, especially running through the crowd with the fanatics,” Crowdus said. “They are very touchy, so you’ve gotta get used to that.”

In order to select the cast members, Crowdus and co-director Cadeja Hays, a Taylorsville senior, held auditions in mid-September. The auditionees were asked to dance to Time Warp, a well-known number from the show. They also had to present a special talent and cold read the script.

“We really wanted to see if they could just improv and go with whatever happens, so sometimes we’d just have two people who don’t even know each other come in the room and do a dance together,” Crowdus said.

Once the cast was selected, they committed to two rehearsals per week until the week of the show, at which point they began rehearsing every night. Even a week out from the show, some of the cast members still could not believe they had been selected for their roles.

Louisville freshman DeJon McClure is a theatre major who decided to audition after speaking with Crowdus about the show. He remembers not knowing what to expect at the auditions but being excited to have a shot at his first WKU production.

After landing the role of Brad Majors, he watched Rocky Horror for the first time at the first rehearsal. 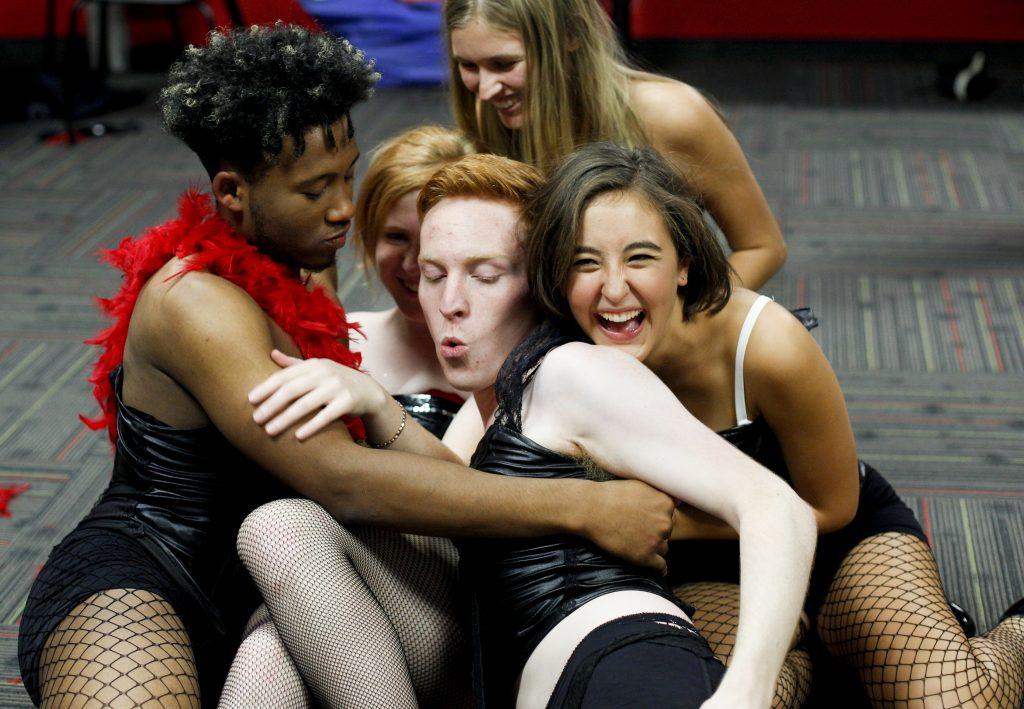 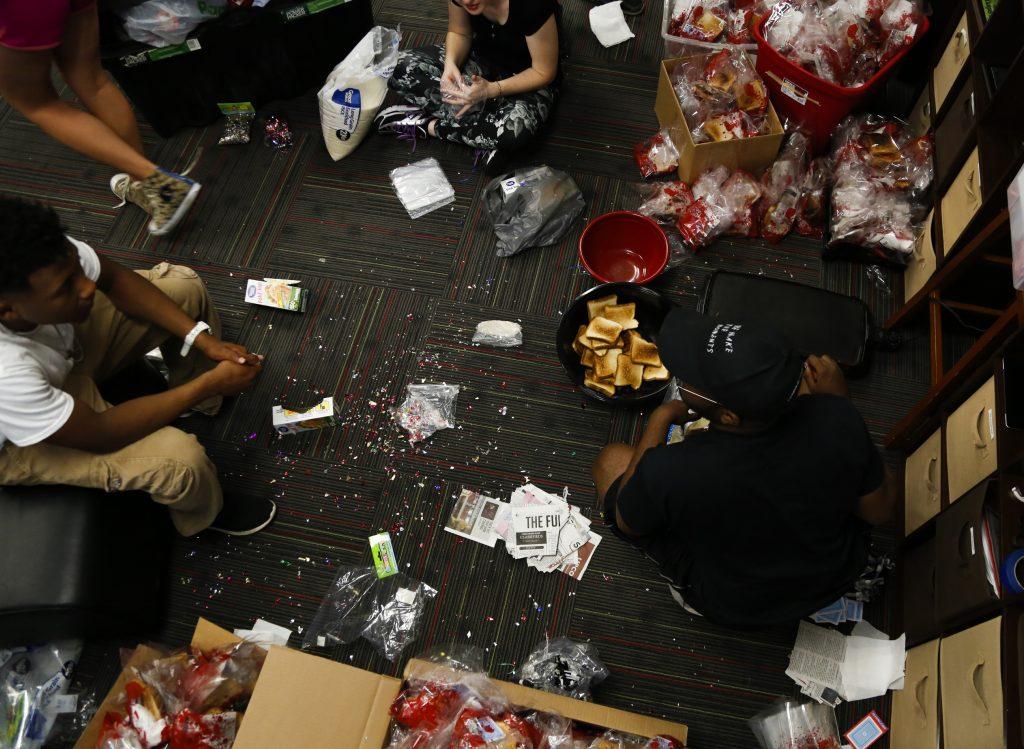 Louisville senior and director Dexter Crowdus and cast members prepare the prop bags for the final night. Each audience member was given a bag to have during the show. During the show, members from the audience threw items at the screen. Photo by Mhari Shaw. 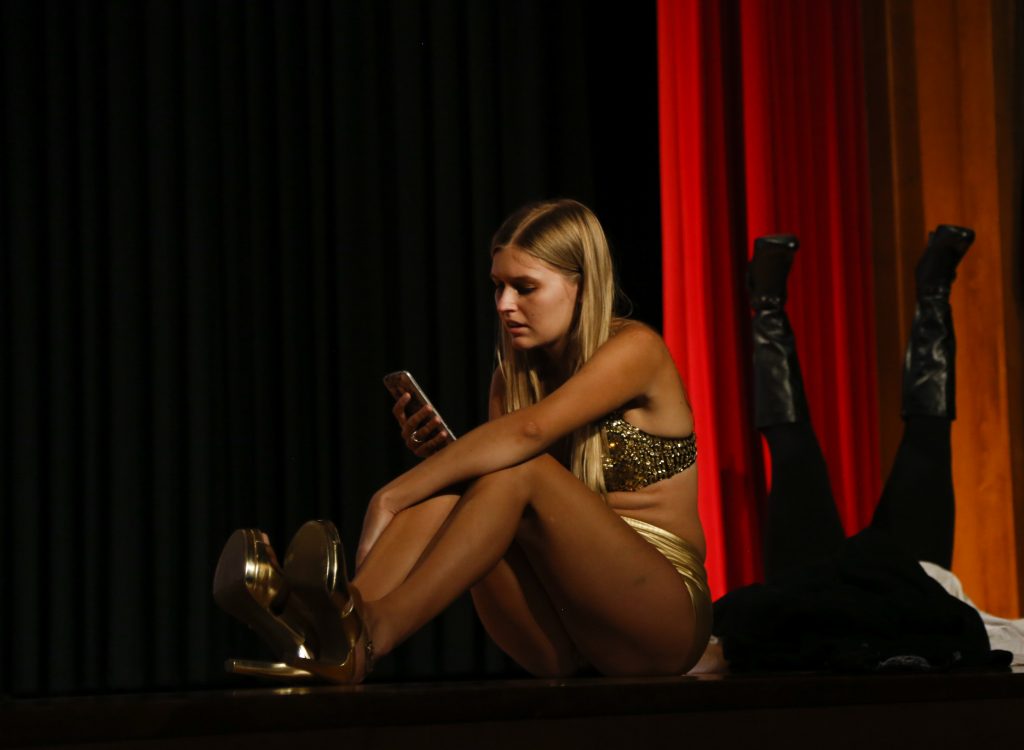 Louise and Amira Bryant, a graduate student from Killeen, Texas, sit and wait for rehearsal to start. Bryant said ” its one of those shows where its like the more fun you have, the more you get out of the show.” Photo by Mhari Shaw. 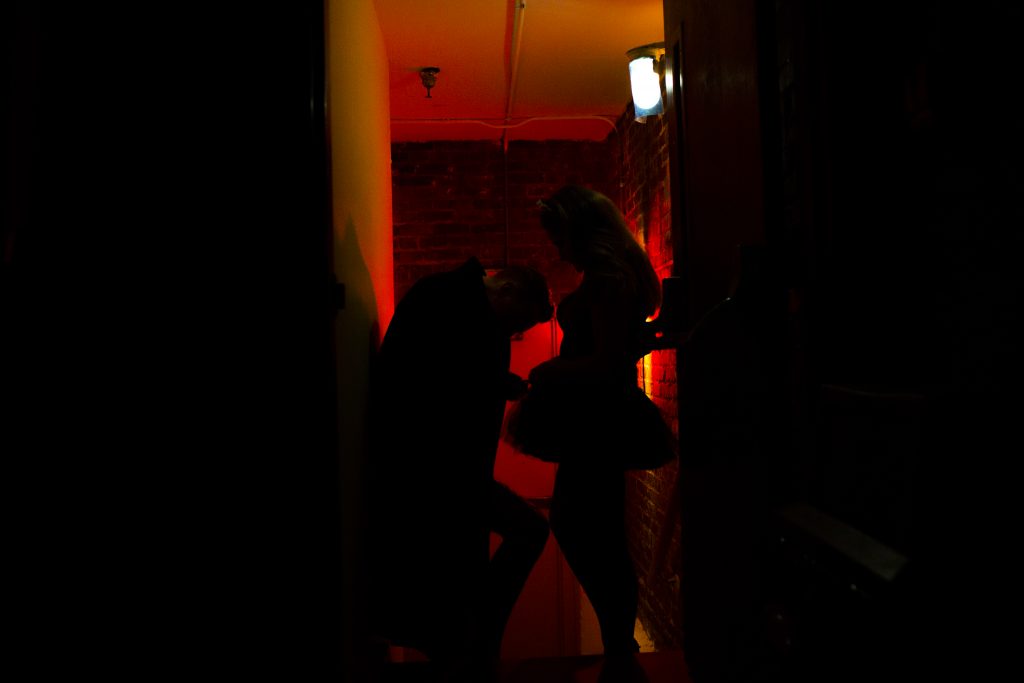 Morrison helps Felicia Thornsbury, an Augusta sophomore, with her costume backstage before the final performance on Monday Oct. 31. This was the second year for Morrison and Thornsbury to perform in the show. Photo by Mhari Shaw.

Bowling Green sophomore Sophia Nasato, who participated in high school plays, said she auditioned for Rocky Horror on a whim and was not expecting to get the role that she was cast.

“I didn’t have anything ready, but my friend Aaron saw me in DSU and said, ‘come audition,'” Nasato said. “So I did.”

After overcoming obstacles and weeks of rehearsals, improving their performance value and adding their own artistic flair to their production, the cast was ready to take the stage in front of an audience. 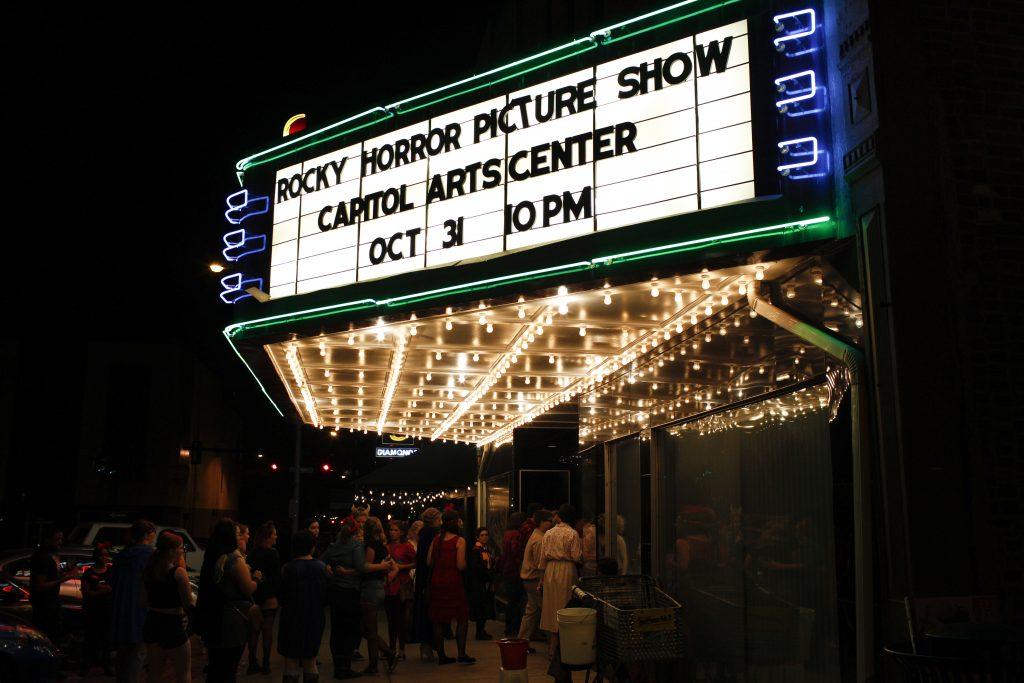 Audience members line the streets of Bowling Green, for the annual live performance of the cult classic, The Rocky Horror Picture Show on Oct. 31. Photo by Mhari Shaw. 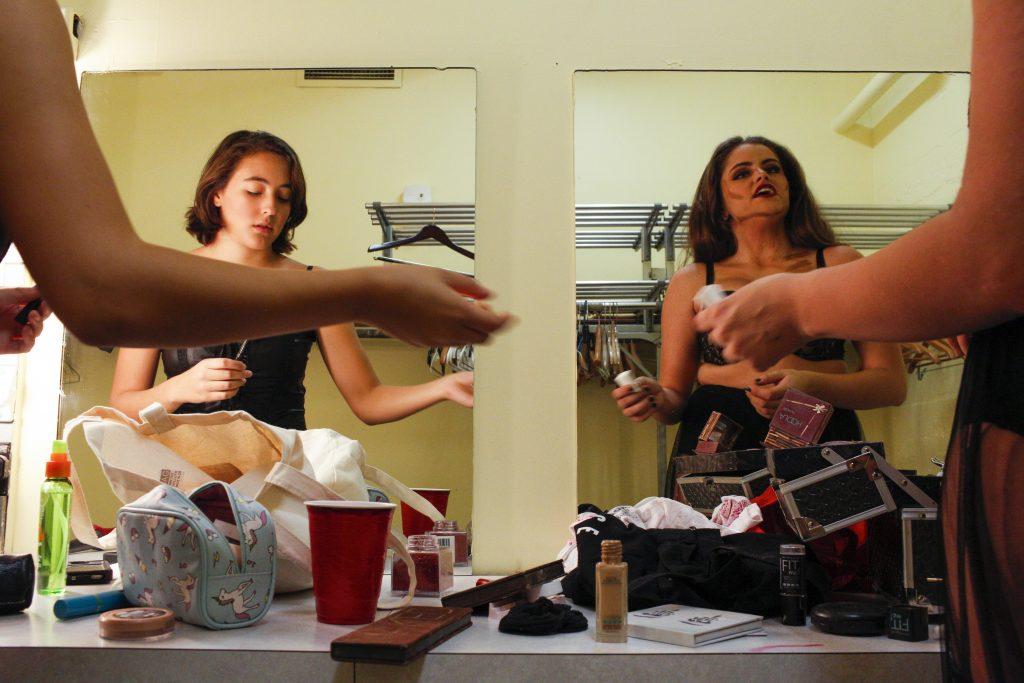 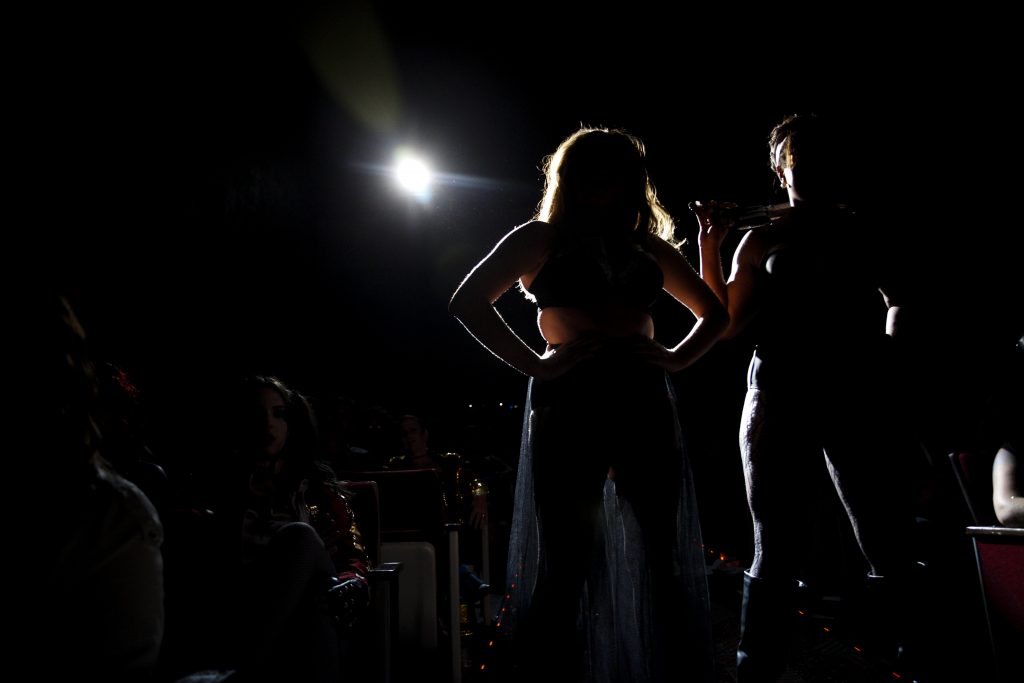 Thornsbury and Bryant, who plays Riff Raff, stand among the audience during the middle of the final scene. Because the show’s energy rans largely off of audience participation, the actors often went out into the crowd and interacted with the attendees face-to-face.
Photo by Skyler Ballard. 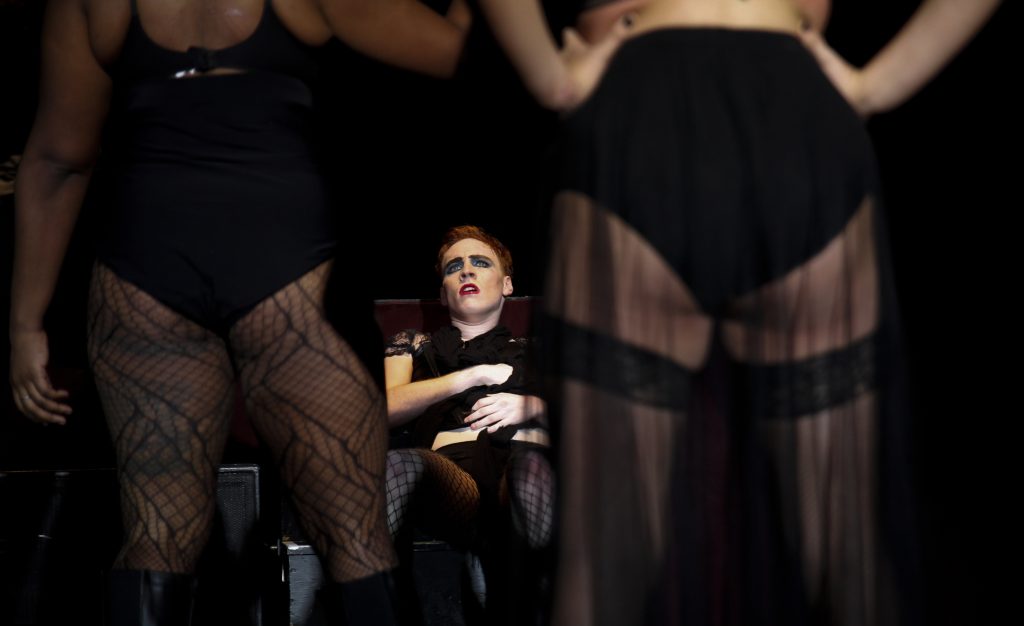 A sold out show

On Halloween night, crowds of chattery, lipsticked lips (and foreheads) crowded in Capitol Arts Center, filling it from wall to wall with black leather, white slips and fishnet stockings.

People waiting outside for extra tickets were eventually turned away as the theater reached its maximum capacity. 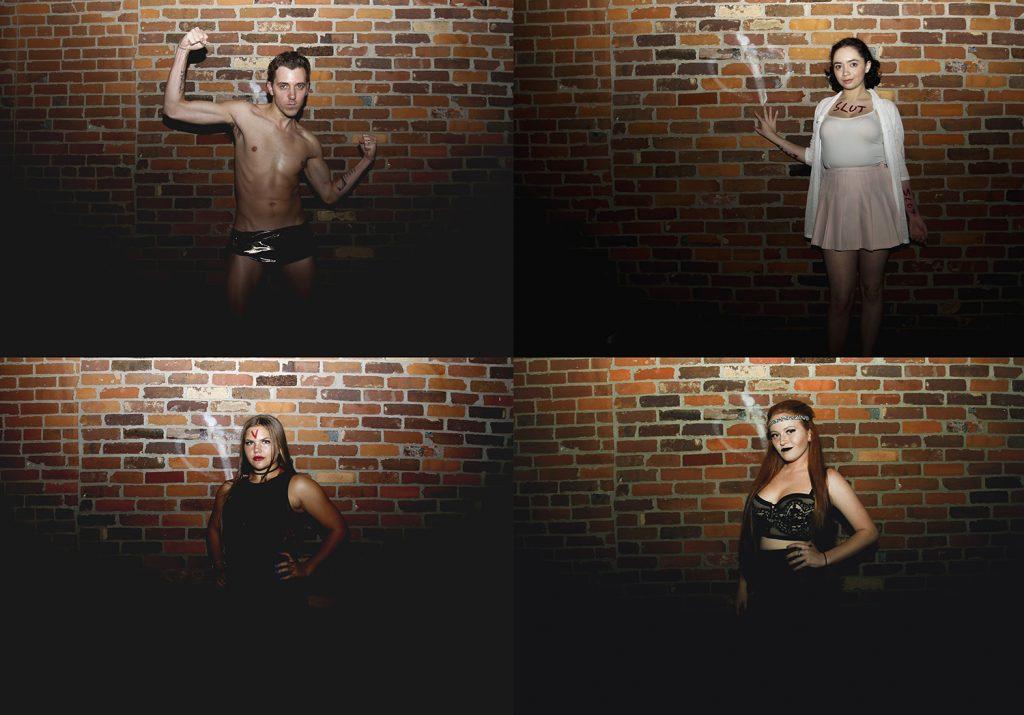 The audience, probably more occult than anything else in Bowling Green, chanted as they waited for the show’s beginning. Each time a new character took the stage, someone let out a scream, and there was a constant call-and-response format between the audience and the actors.

Keeping with Rocky Horror tradition, the cast performed as the film played in the background. The cast mouthed the words and executed each movement with their corresponding on-screen character.

Nasato said it was a task that was more difficult than expected.

“It is hard memorizing every single little movement that Janet or Brad or any of the characters do and putting that onto a stage with no props or anything,” Nasato said.

That didn’t stop her or any of the cast members from internalizing every line, every mannerism of their characters.

The cast beamed as they moved through each number and even laughed and joked with each other secretly on stage.

“The show is all about having fun,” Crowdus said. “That is the main goal.”

As long as that goal was accomplished, Crowdus said the show would be successful no matter what.

After the final corseted, boa-slinging dance numbers and lofty ballads, the crowd loudly exited back onto East Main Avenue and into the night. Hugs and kisses were thrown about as the audience members recounted favorite details of the performance.

Surrounded by fans, McClure said the performance was the most fun he’s had in a show.

“It was so fun,” McClure said, before turning to take more photos with fans and friends. “It was funny. That was my first show in college. Just wait until next year.”

Bowling Green native Selena Martinez, a student at Bowling Green High School, attended the show. She said she enjoyed it and would be back again next year.

“I came three years ago and decided to come out again last minute,” Martinez said. “It’s always a great time.”

As Rocky Horror fans made their ways back to their cars, the actors walked back hugging and laughing with each other. Their work was done. 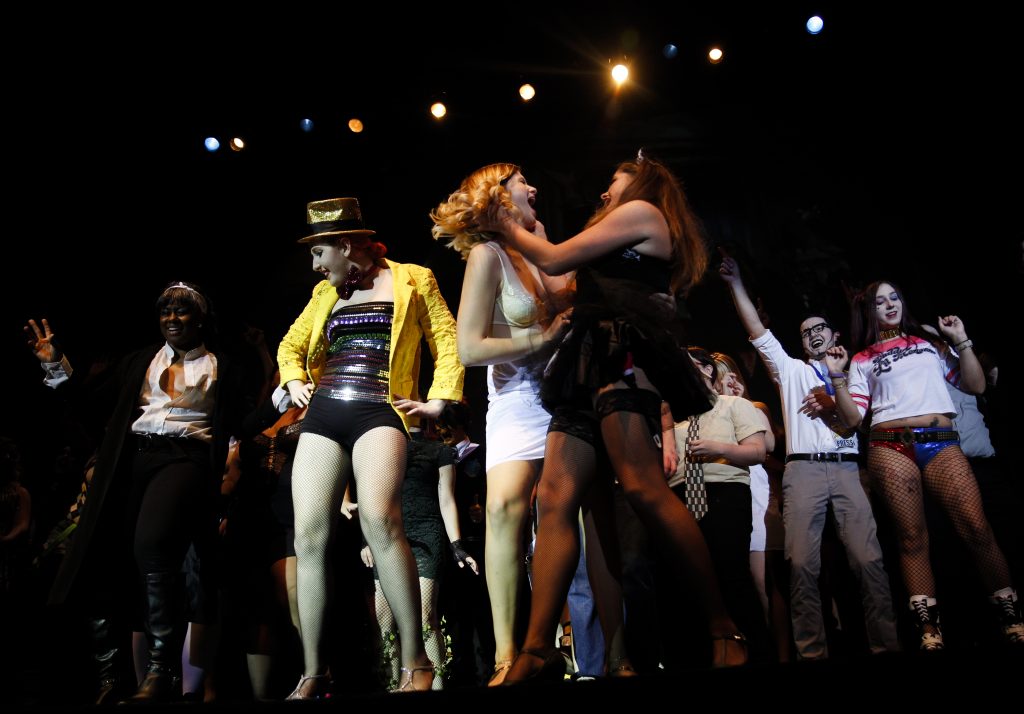 Thornsbury interacts with an audience member during the Time Warp Dance. During this scene, the audience joined the actors on the stage for the dance.
Photo by Skyler Ballard. 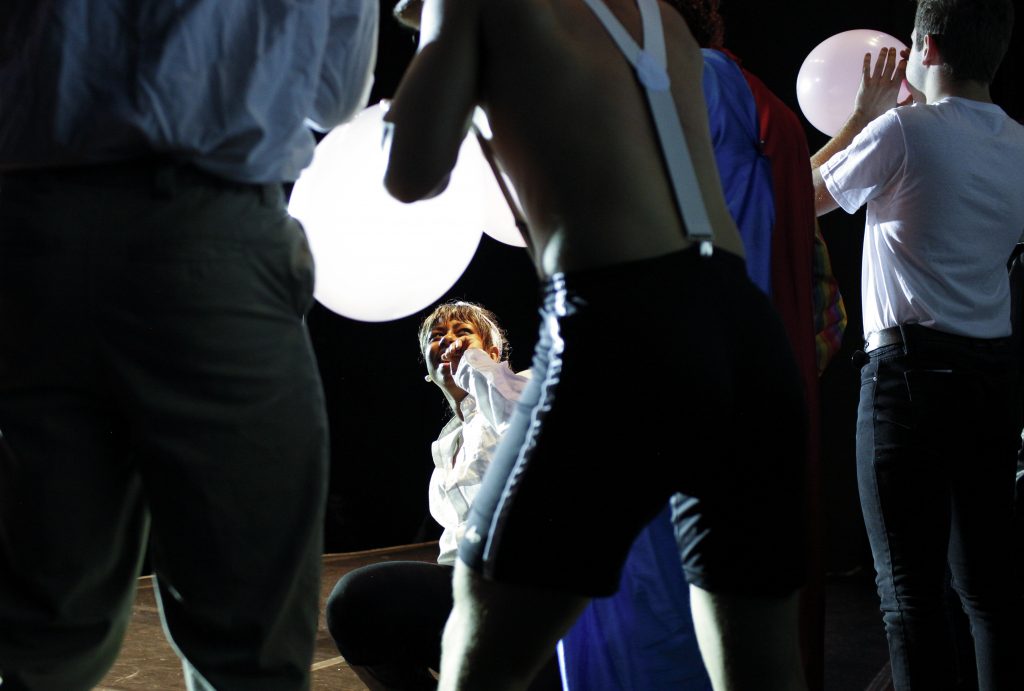 Bryant assists in the pre-show act. The pre-show consisted of sexual games where the audience members were pulled up on stage. Photo by Mhari Shaw. 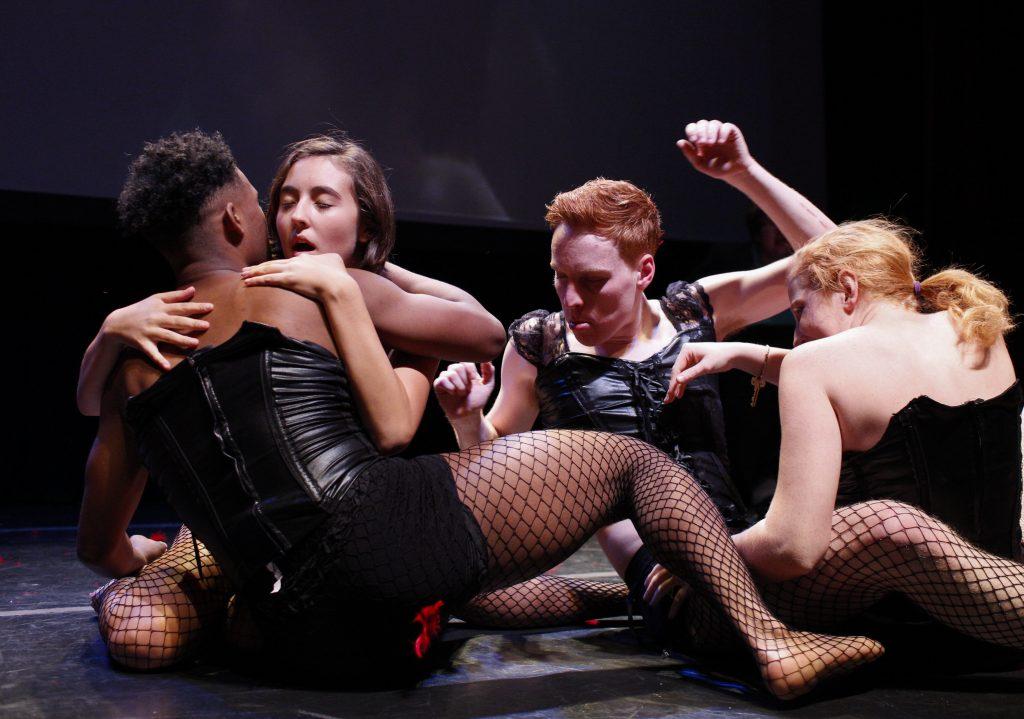 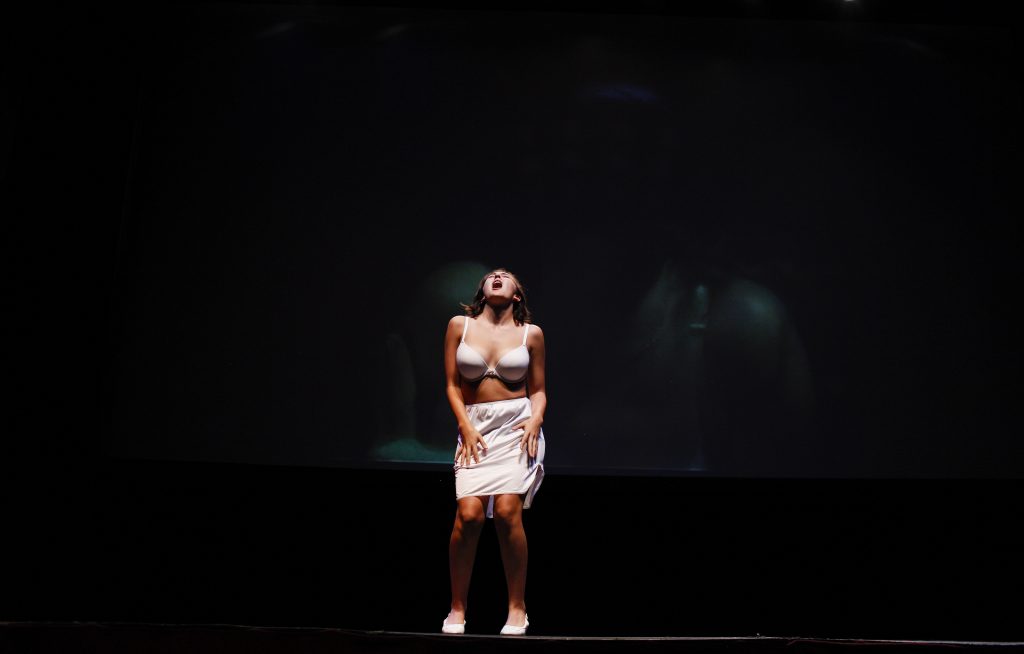 Nasato acts out the role of Janet during the song “touch a touch me” before the final show. The final performance was held at the Capitol Arts Center in downtown Bowling Green. Photo by Mhari Shaw. 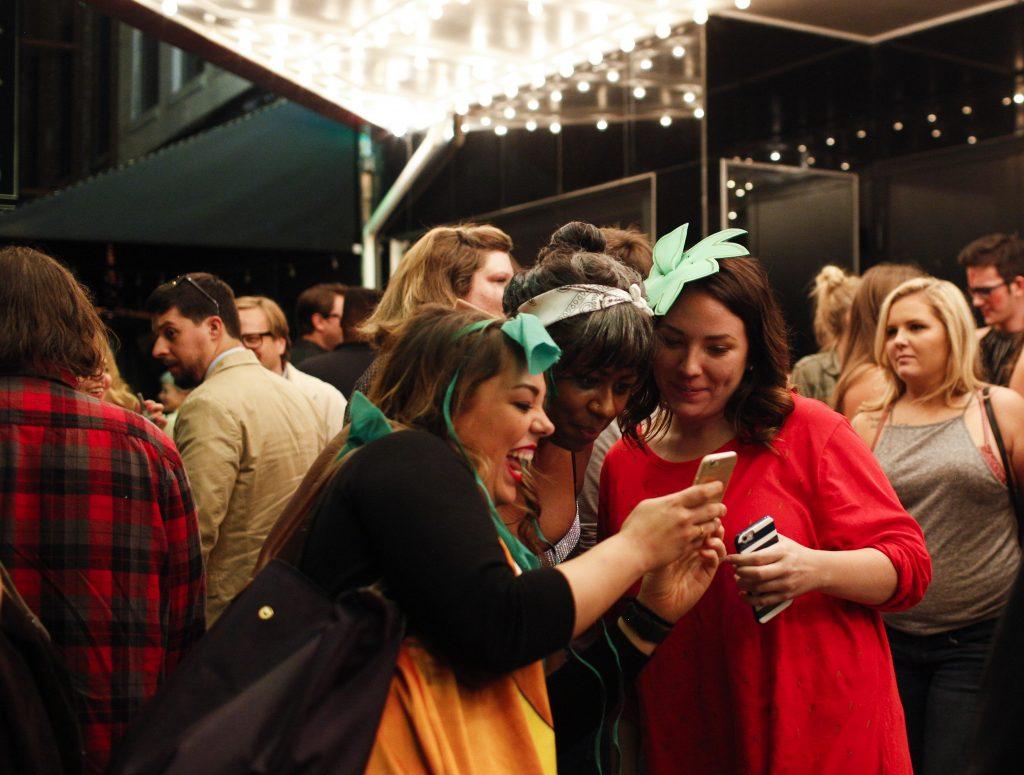 Bryant engages with audience members after the show. The show was put on by Campus Activities Board and had been in production for over 25 years. Photo by Mhari Shaw. 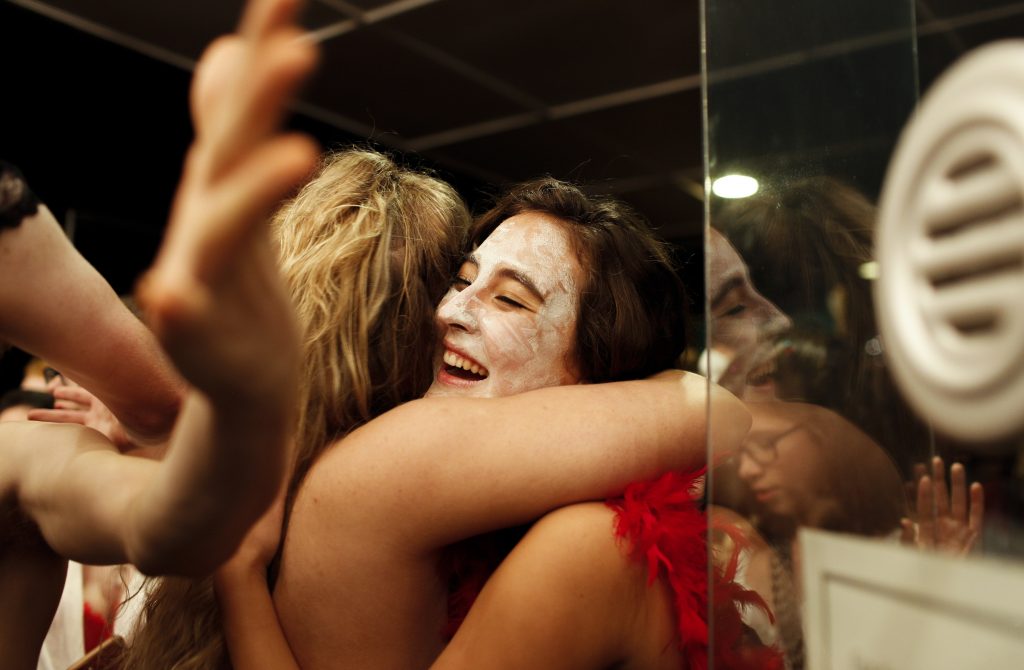 Nasato embraces friends after the show. Every year the auditions were held for cast members. “Its so much fun and it really takes you out of your comfort zone and I love that kind of stuff.” Nasato said. Photo by Mhari Shaw. 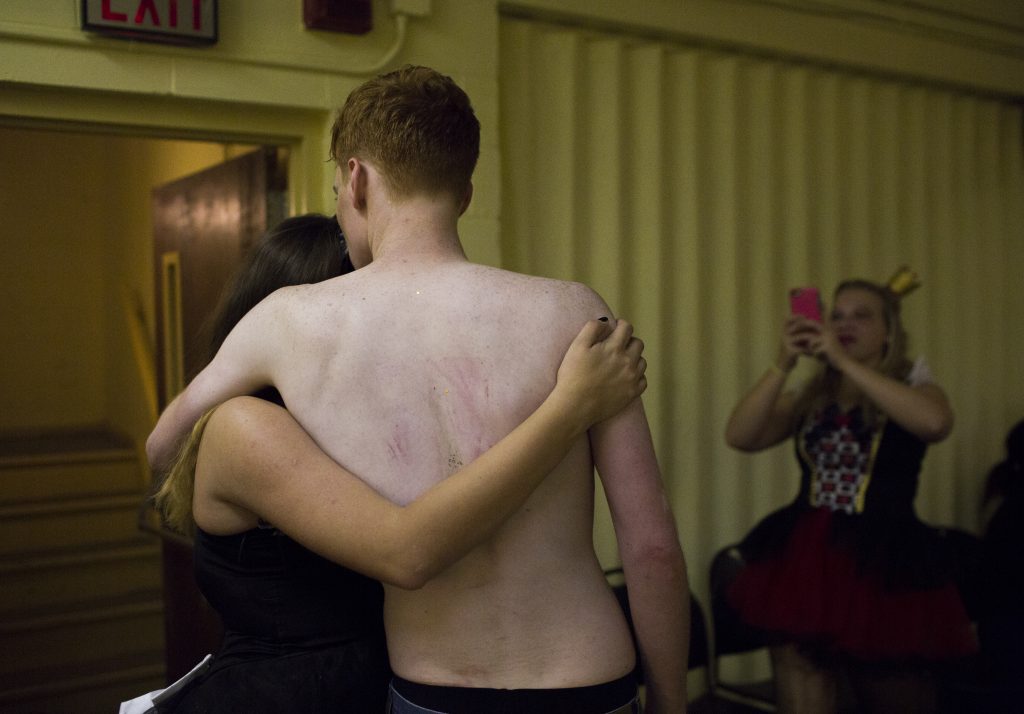 Morrison embraces co-cast member Thornsbury after the performance. This was Morrison’s second year playing the role of Frank-N-Furter in the production. Photo by Mhari Shaw.

Amira Bryant, a graduate student from Killeen, Texas, said one quote from the show sums up its true meaning: “Don’t dream it. Be it.”

It’s not just the physical image of the show, the sex or the songs that bring the eccentric crowds out each year, she said it is this mantra for being yourself and acceptance.

“It’s one of those nights where you can openly be whatever you want to be in every realm possible,” Bryant said. “It’s so creative.”

Furthering this idea of acceptance, this year’s casting was also race and gender-blind, meaning anyone could be chosen for any role. Rocky, who is normally a male, was played by Florence sophomore Madeline Louise. Some audience members, including Bowling Green senior Sarah Allford, noted this change as a win for Rocky Horror.

“We were actually trying to imagine the entire movie being about lesbians, and it was really great actually,” Westcott said.

Other cast members said Rocky Horror gave them the confidence they needed to put themselves in more vulnerable, risk-taking positions.

“Rocky Horror is a good start for me because we do some weird stuff in the show,” McClure said. “If I could do this, I know I would feel so comfortable doing something else in the future.”

In the end, cast members said “The Rocky Horror Picture Show” is about bringing people together to highlight their mutual weirdness and celebrate themselves as individuals.

Looking back on the rehearsals and time dedicated to making the production, Augusta sophomore Felicia Thornsbury said the opportunity to perform in Rocky Horror was a gift.

“Rocky Horror gives everybody the opportunity to be that thing that they always wanted to be, but then society said ‘nah, you can’t do that,'” said Thornsbury. “There’s so much freedom in it.”