Editor’s Note: A previous version of this story had a typo and referred to Crofton, Kentucky, as “Crafton.” It has since been corrected. The Talisman regrets the error.

Hooves stomped, dirt flew, fans cheered and cowboys rode throughout the weekend during the Lone Star Rodeo’s 70th anniversary weekend Feb. 7-9 at the WKU L.D. Brown Ag Expo Center. The Lone Star Rodeo Company is a family-owned company that was first started by Preston and John Fowlkes, a pair of brothers from west Texas. They started hosting rodeos in 1949 in Franklin, Tennessee, and over the years made their way to Crofton, Kentucky. Two of our Talisman photographers grabbed their cowboy hats and made their way down to the show on Feb. 7-8. The following photos depict what the rodeo life is like. 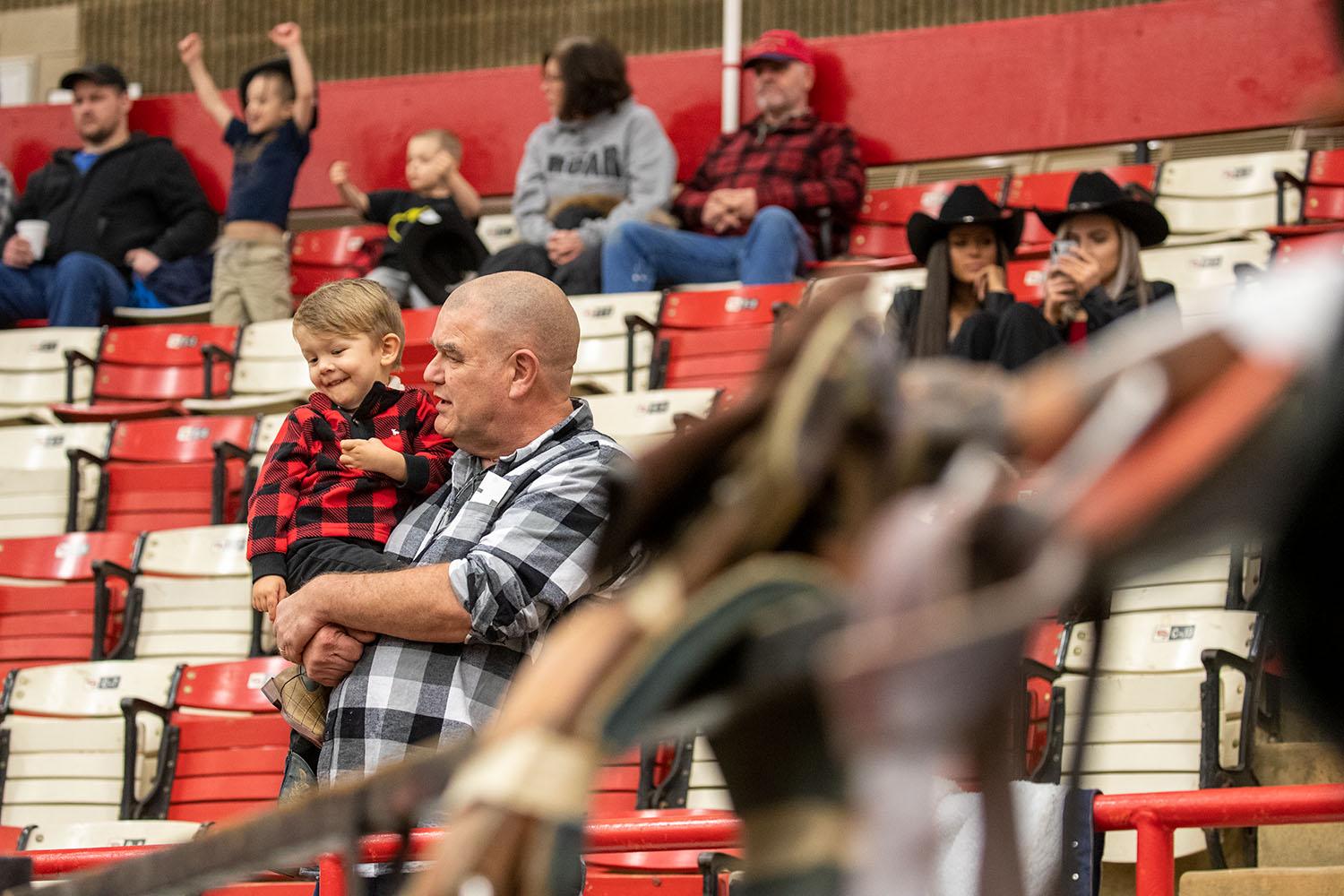 Brax Baker, from Greensburg, smiles while watching the cowboys prepare their equipment before the beginning of the rodeo. Lemuel Baker, Greensburg, holds him and brought him to the show. “He loves the rodeo,” Lemuel said. (Photo by Lily Thompson) 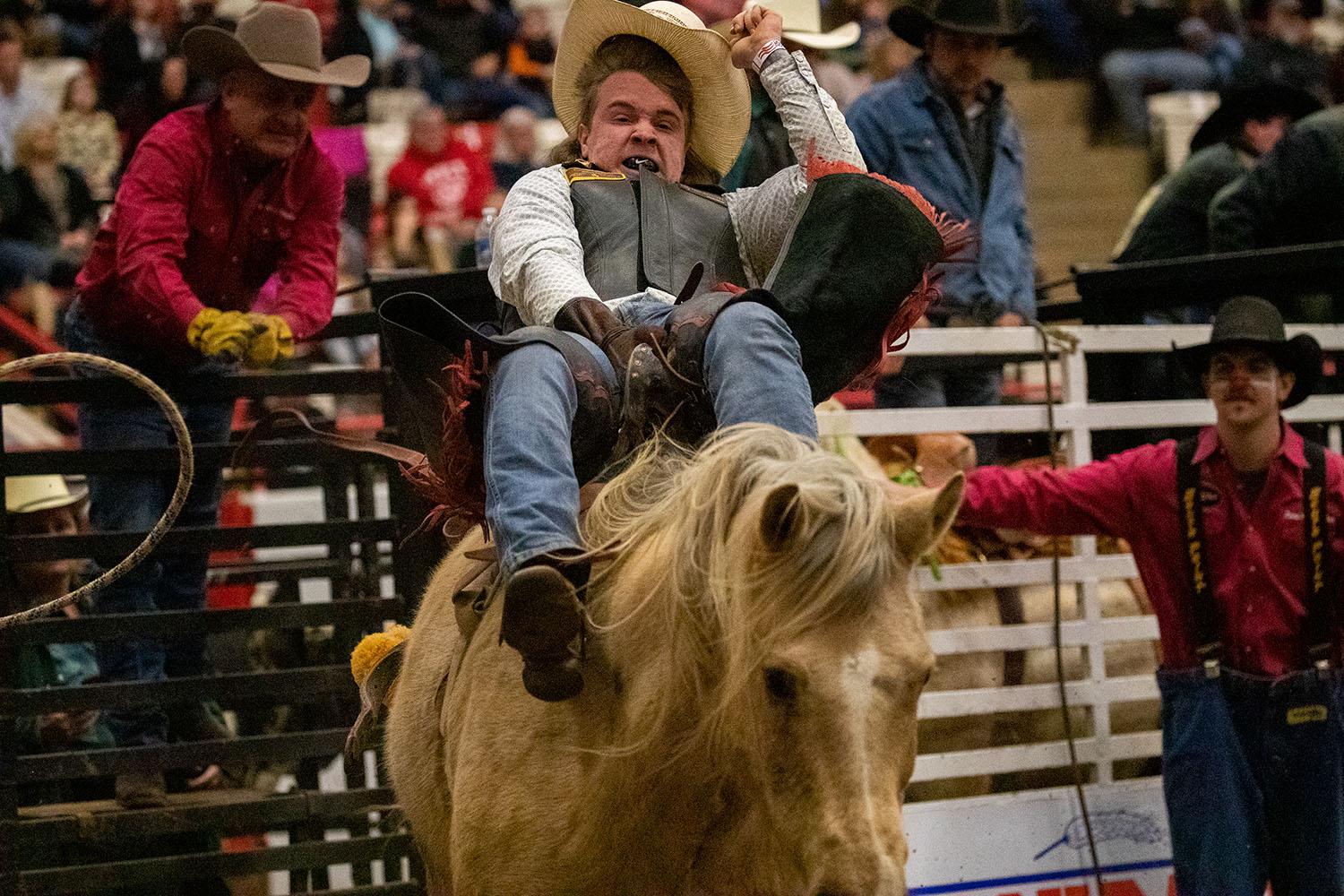 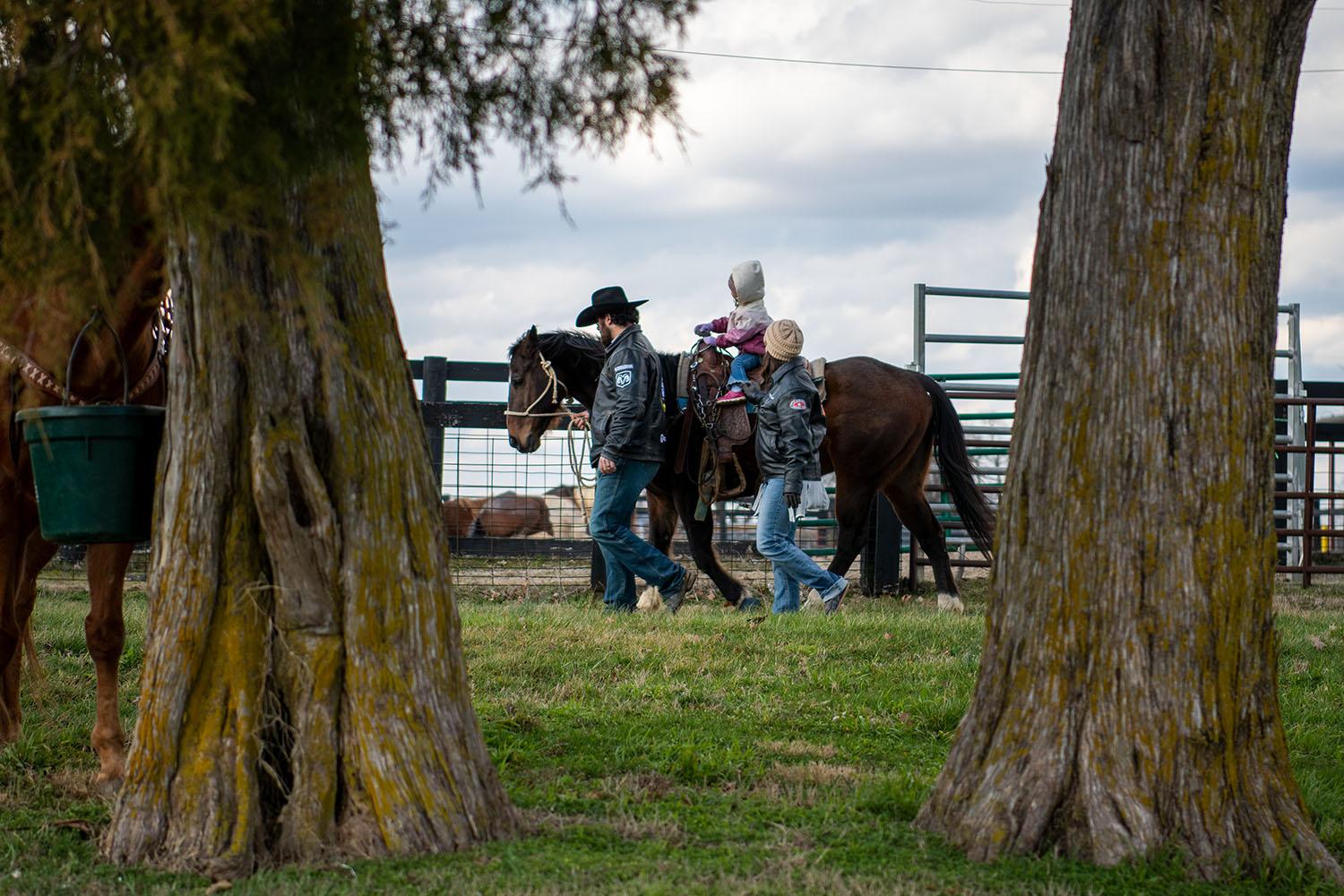 Palmer and Kelsey White from Cookesville, Tenn. let their daughter, Caroline, ride on his horse, Zip, before the Lone Star Rodeo on Feb. 8. Palmer participated in steer wrestling that afternoon. (Photo by Allie Hendricks) 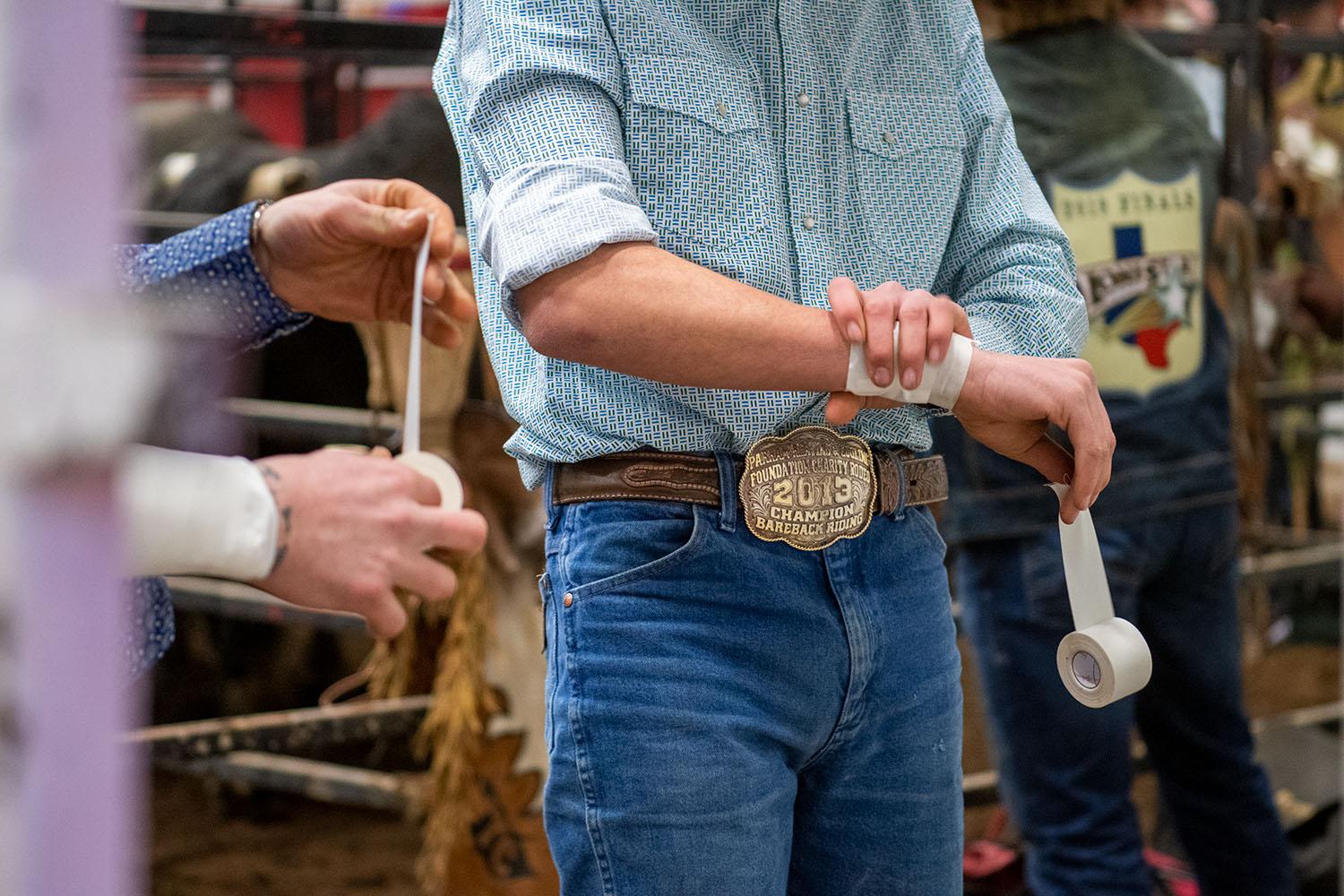 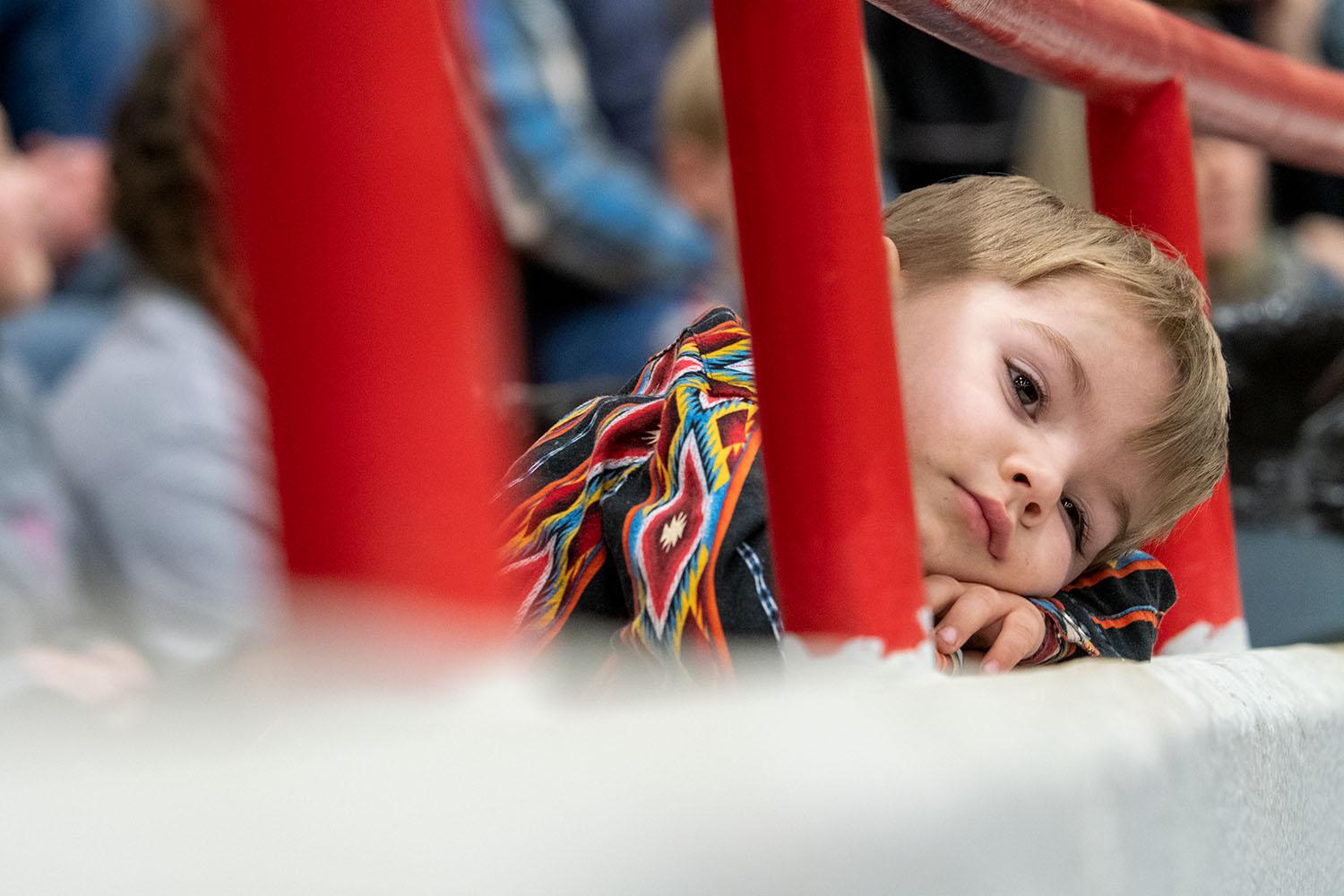 Josiah Flora, 2, from Smiths Grove rests on the railing in between events at the Lone Star Rodeo on Feb. 8. The rodeo has specialty and clown acts in between events to keep the audience entertained. (Photo by Allie Hendricks) 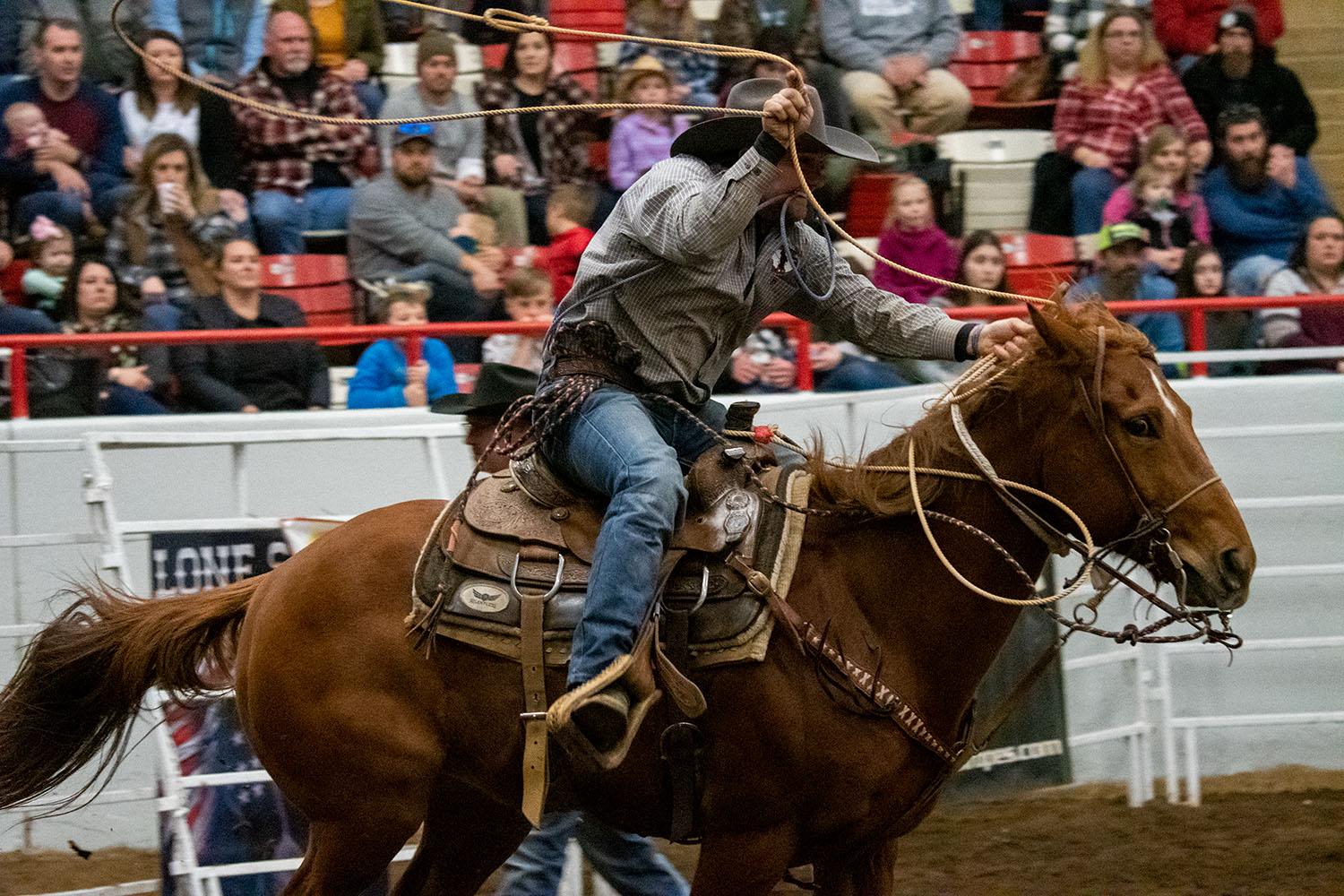 A contestant rides out to lasso a calf during calf roping at the Lone Star Rodeo on Feb. 8. Once the calf was lassoed, the contestant would have to quickly tie the calf’s legs together. (Photo by Allie Hendricks) 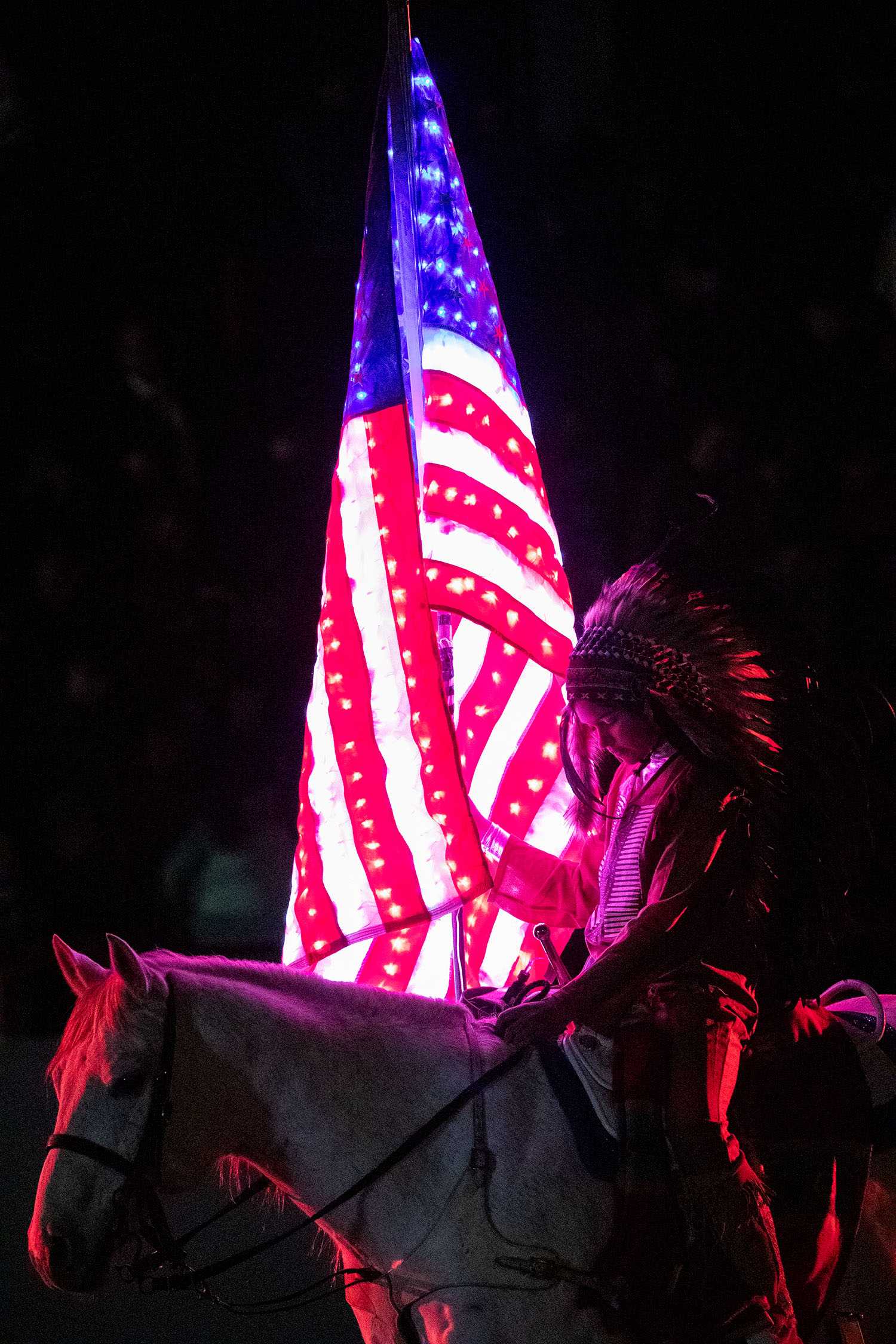 OraLee Madison, 12, from Crawford bows her head in prayer during the beginning performance of the first night of the Lone Star Rodeo. The rodeo begins with a celebration of American figures including the Native American, Cowboy, Calvary and others. The show also starts with the playing of the national anthem and a prayer. (Photo by Lily Thompson) 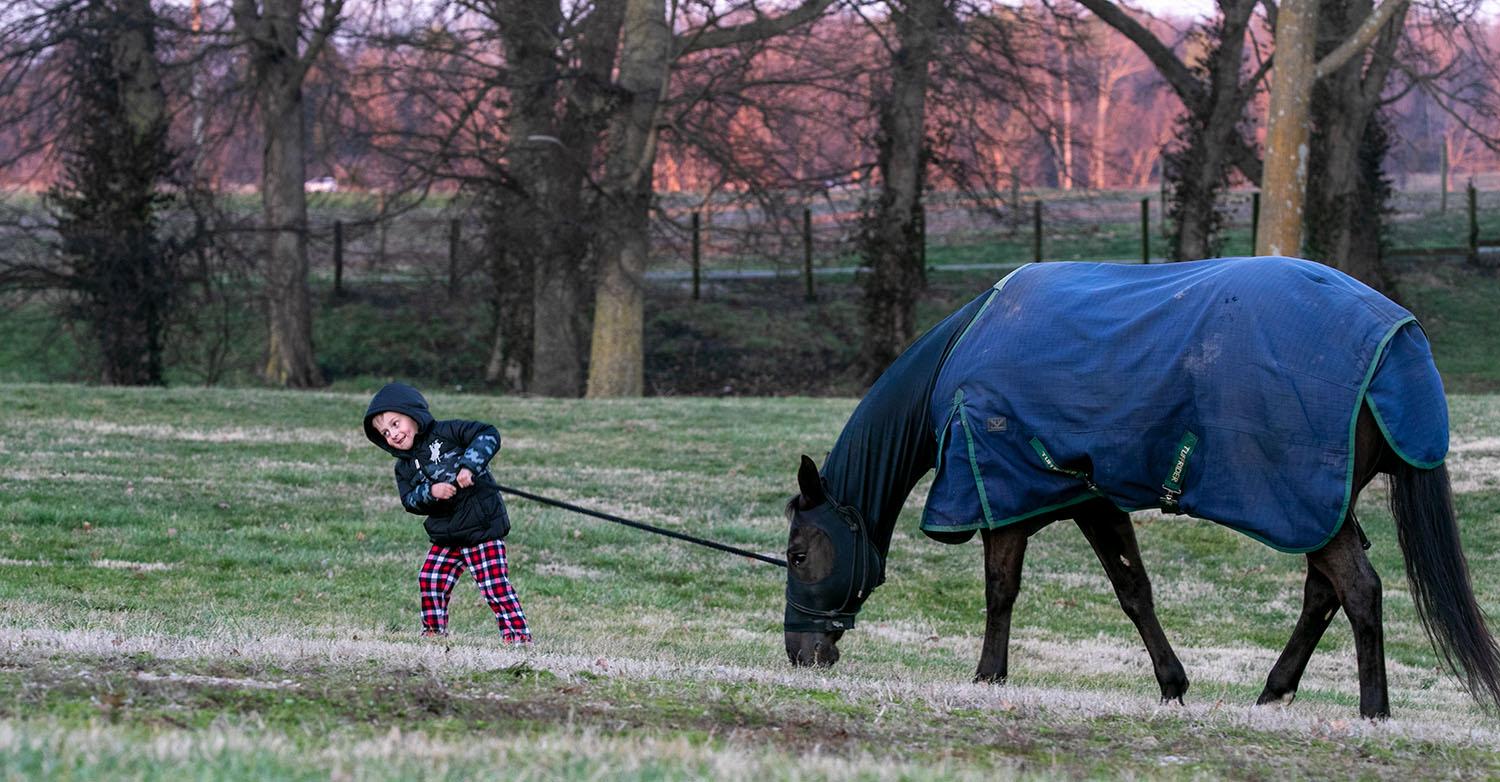 Collin Greer, 4, from Quitman, Ark., walks his family’s horse, Blue, behind the expo center before the show on Saturday, Feb. 8. Collin is the youngest of a rodeo family. He and his parents and older sister travel often for his father’s steer wrestling. “This is a fun rodeo,” Kasey Greer, Collin’s father, said. “We go to 60-70 rodeos a year and Bowling Green is one of our favorites.” (Photo by Lily Thompson) 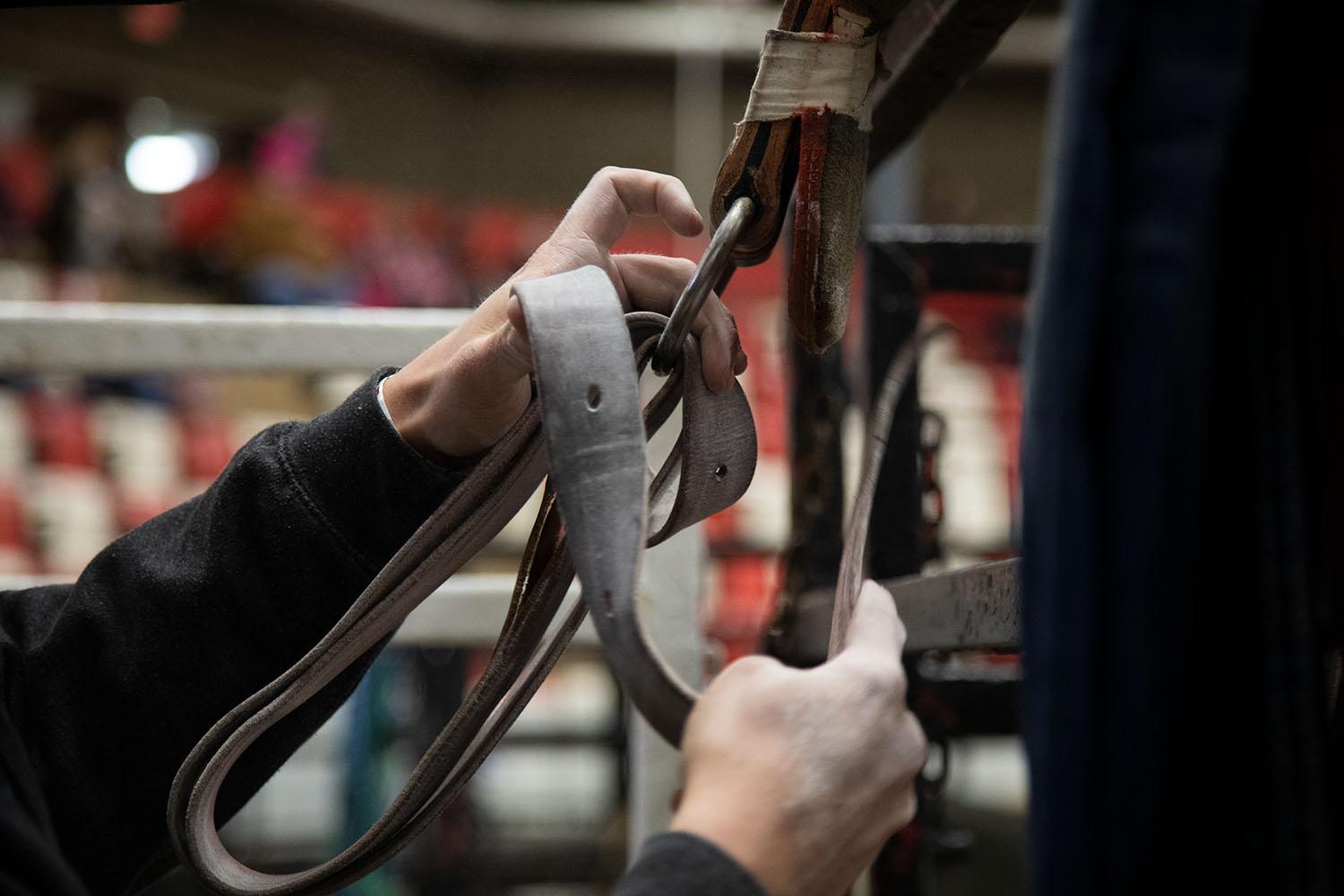 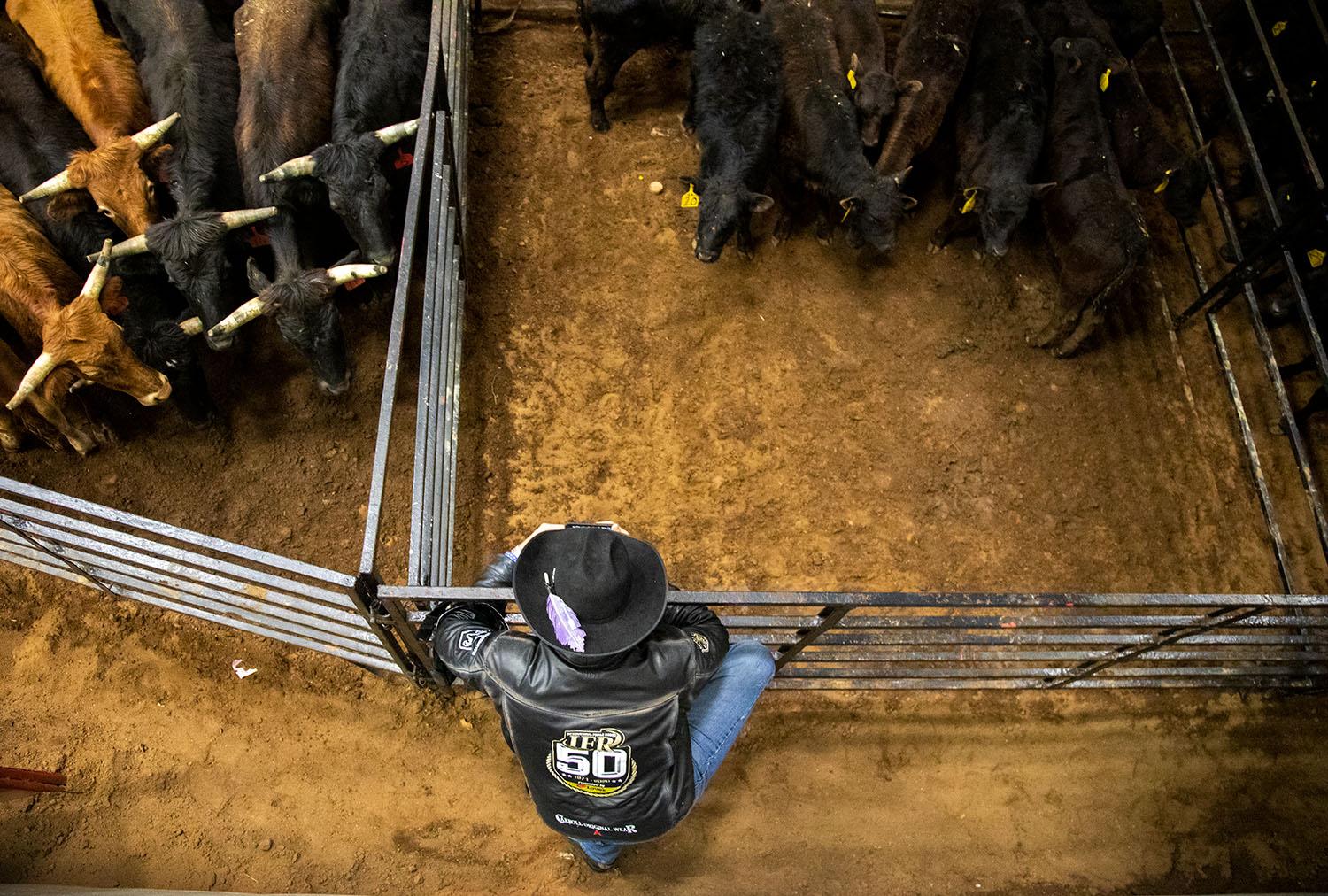 A cowboy plays on his phone while watching the calves and steers during the performance. Many of the animals were only in the show one time throughout the weekend to keep them from getting hurt. (Photo by Lily Thompson) 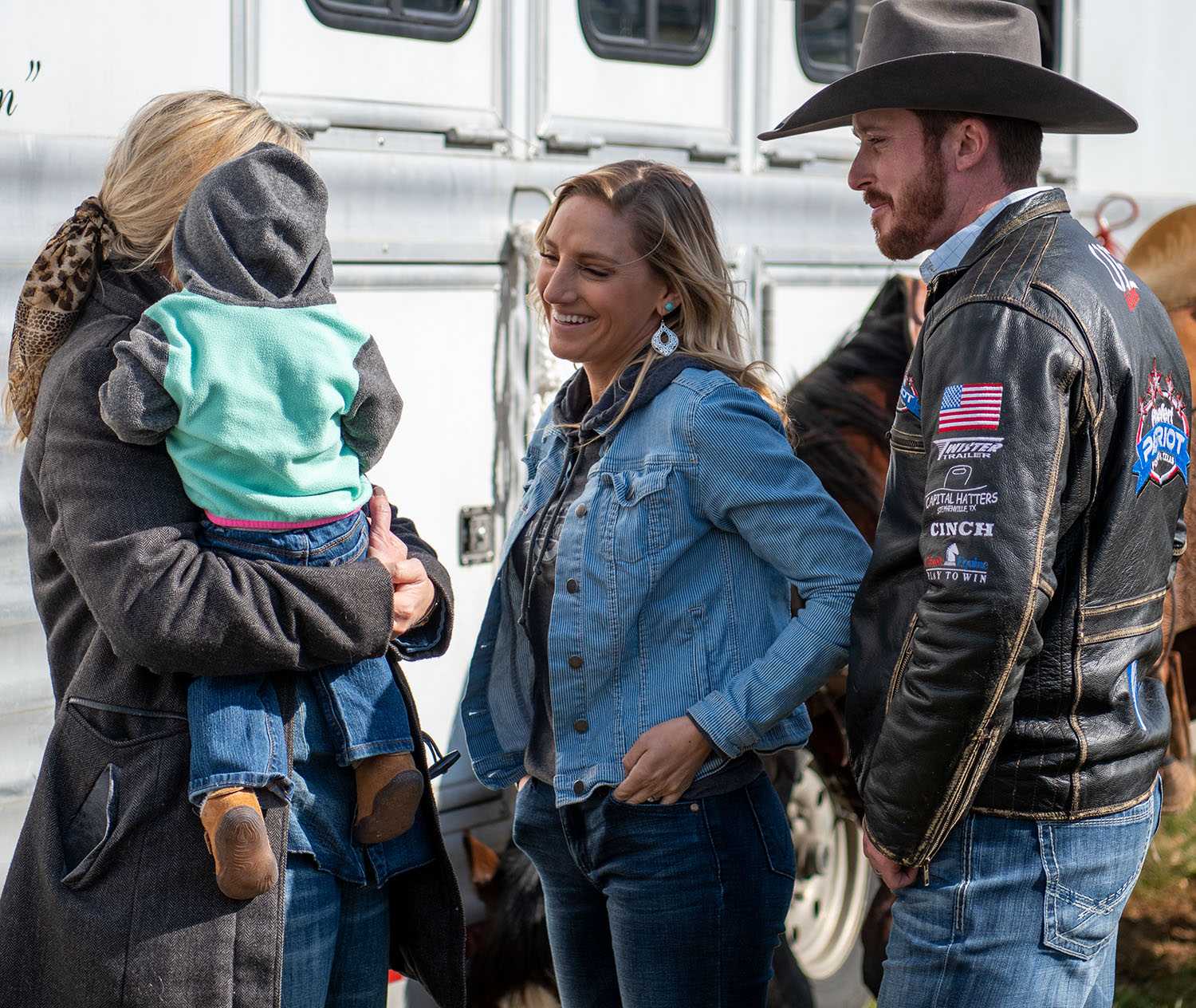 Dusty Mullen holds Halle Pete while chatting with Whitney and Dillon Thweatt before the Lone Star Rodeo on Feb. 8. They are from Murray. and Dillon was a roping contestant that afternoon. (Photo by Allie Hendricks) 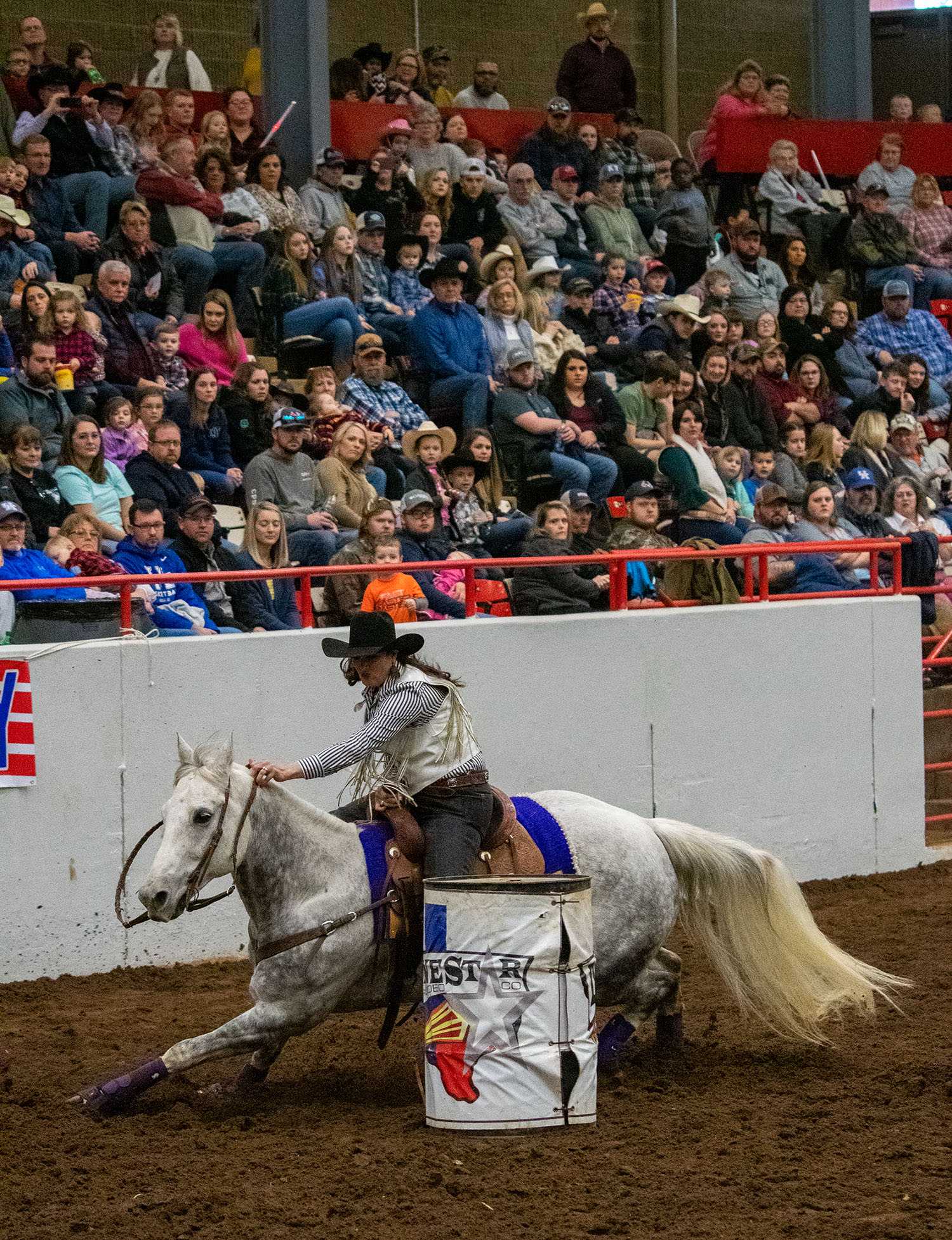 Vanessa Madison from Crofton competes in barrel racing at the Lone Star Rodeo on Feb. 8. In barrel racing, the rider attempts to complete a cloverleaf pattern around preset barrels in the fastest time. (Photo by Allie Hendricks) 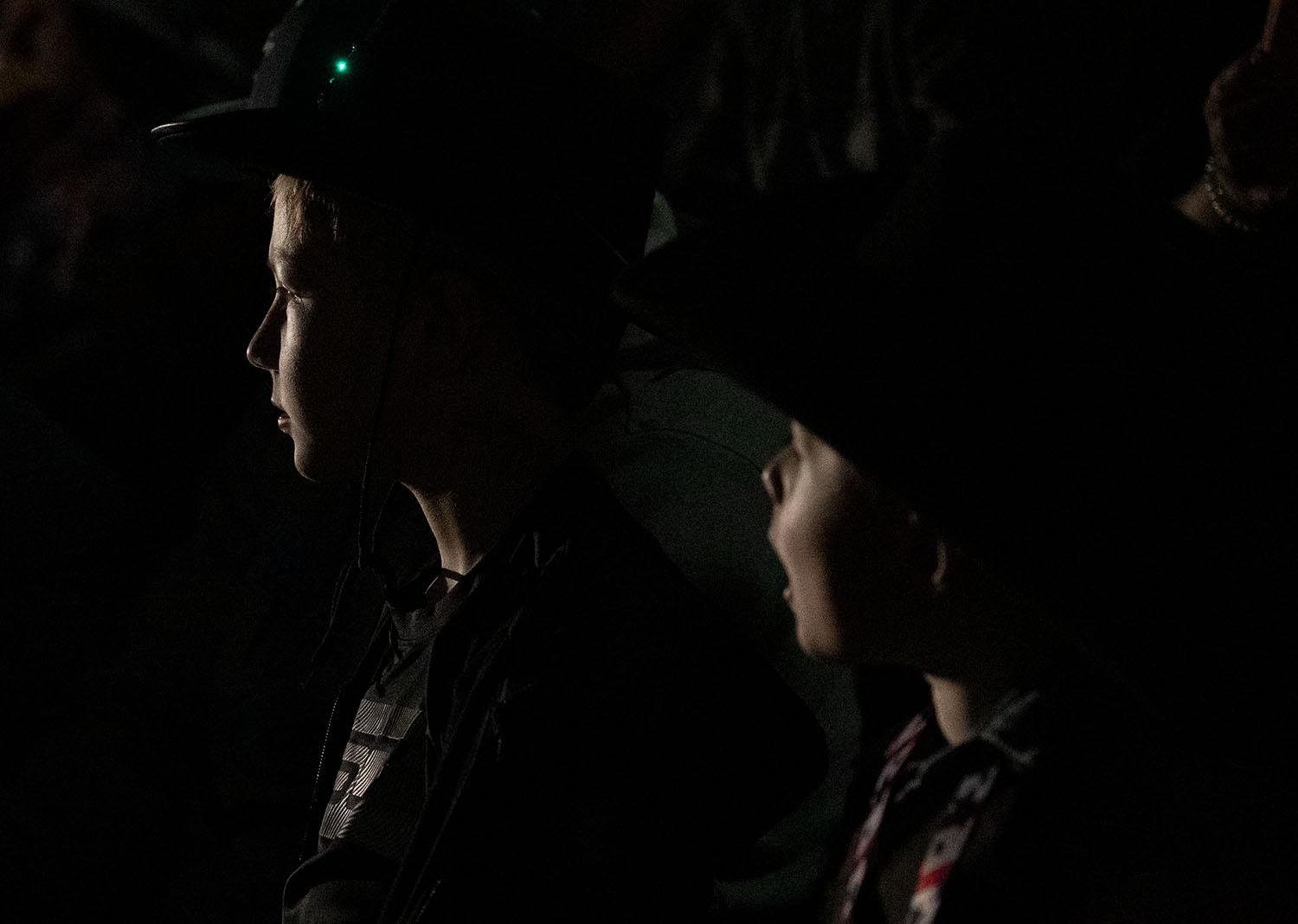 Gatlin Cooke, 4, from Russellville, watches the opening performance with his little brother, Bridge, who is 3. His mother brought the two boys in celebration of Gatlin’s 5th birthday, which is Monday, Feb 10. (Photo by Lily Thompson) 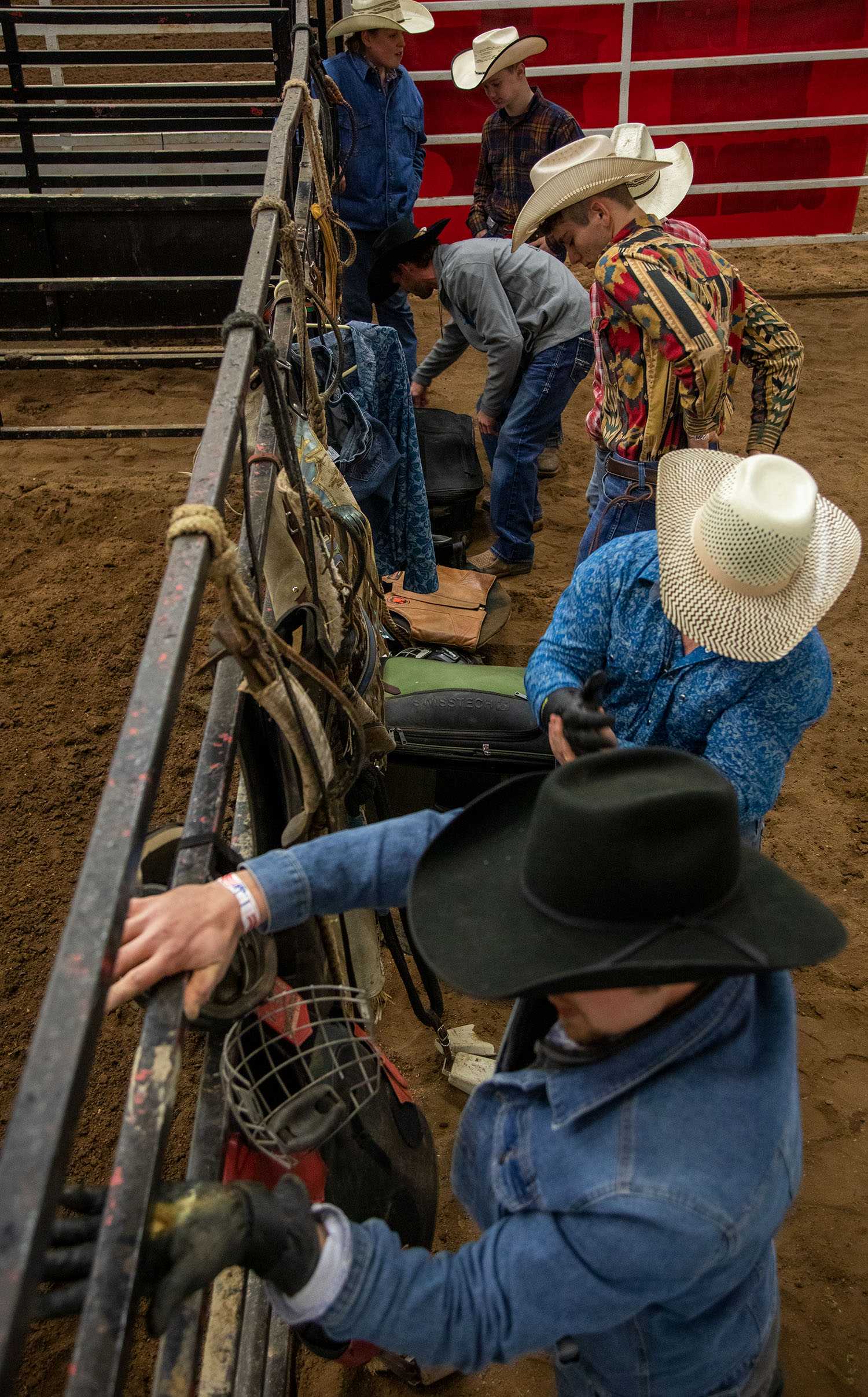 Cowboys get their gear ready before the rodeo starts. They start early making their strings sticky and breaking in gloves and ropes to make staying on the bull or bronc easier. (Photo by Lily Thompson) 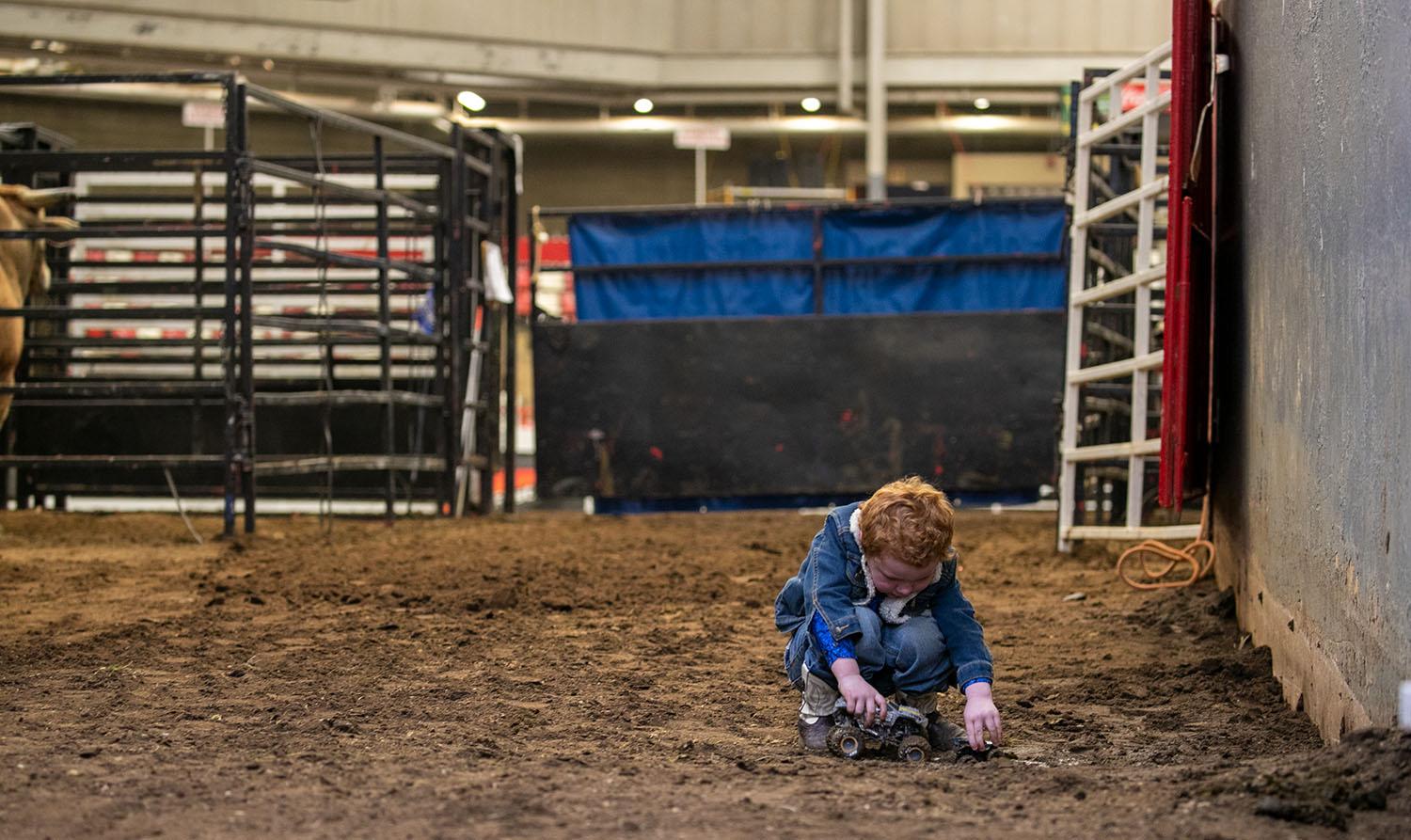 Wilder Fowlkes, 3, from Crofton plays with his monster trucks in the mud in between performances on Saturday, Feb. 8. His great-grandfather started the Lonestar Rodeo 71 years ago. “We’re carrying on the family tradition,” Preston Fowlkes, Wilder’s dad, said. “It’s our way of life.” (Photo by Lily Thompson)