From the Magazine: Misspoken

I sat at my desk in Ms. Delaney’s first-grade classroom, eagerly listening to her describe the different sounds associated with the alphabet. I drew curves over the short vowel sounds and dashes over the long ones. I sounded out combinations of “C” and “H” or “C” and “K.” I waited patiently when my teacher took extra time to explain these concepts to my fellow classmates. I was good at these lessons. I understood which letters made which sounds.

I just didn’t understand how to make those sounds myself.

In elementary school, I participated in two types of phonics lessons: classroom discussions on what different letters sounded like and speech therapy sessions, in which I learned howto pronounce those sounds. One was easy for me. The other was not.

My speech therapist, Ms. Fountain, would hold up index cards with different sounds written on them. Most of them contained the letter “R.” She pronounced the sound slowly, and I’d watch her mouth, trying to imagine my own doing the same. Then it was my turn, and I’d attempt to mimic her lips, positive that with enough concentration, I could get it right.

I usually didn’t get it right. Ms. Fountain would repeat the sound, and I would try again, often without success.

During the lessons, I encountered one of the largest ironies of my life: I excelled in the classwork most of my peers found difficult but failed in the basic pronunciations that were natural for everyone except me.

In third grade, the speech therapy classes suddenly stopped. I never saw Ms. Fountain again. I was confused why she didn’t throw a party for me like she did for the other students who had “graduated” from speech therapy. I assumed my sessions stopped because I was cured, that the numerous classes I was pulled out of for therapy had finally fixed my voice.

In sixth grade, I realized that was not the case.

I joined the forensics team (also known as speech and debate) at my school because my older brother excelled in it, and I had always followed in his footsteps. During countless practices, my coaches said my enunciation was poor. They told me to slow down and focus. No matter how much I practiced, some sounds didn’t come out correctly. In an offhand comment, my coaches brought up my speech impediment, and I was shocked. I thought I was cured — except I wasn’t.

I realized my elementary speech therapy classes didn’t end because I’d finally learned how to talk like everyone else. They ended for some other unknown reason. Maybe it was budget cuts. Maybe it was scheduling. Or, maybe, Ms. Fountain decided that my case was hopeless. 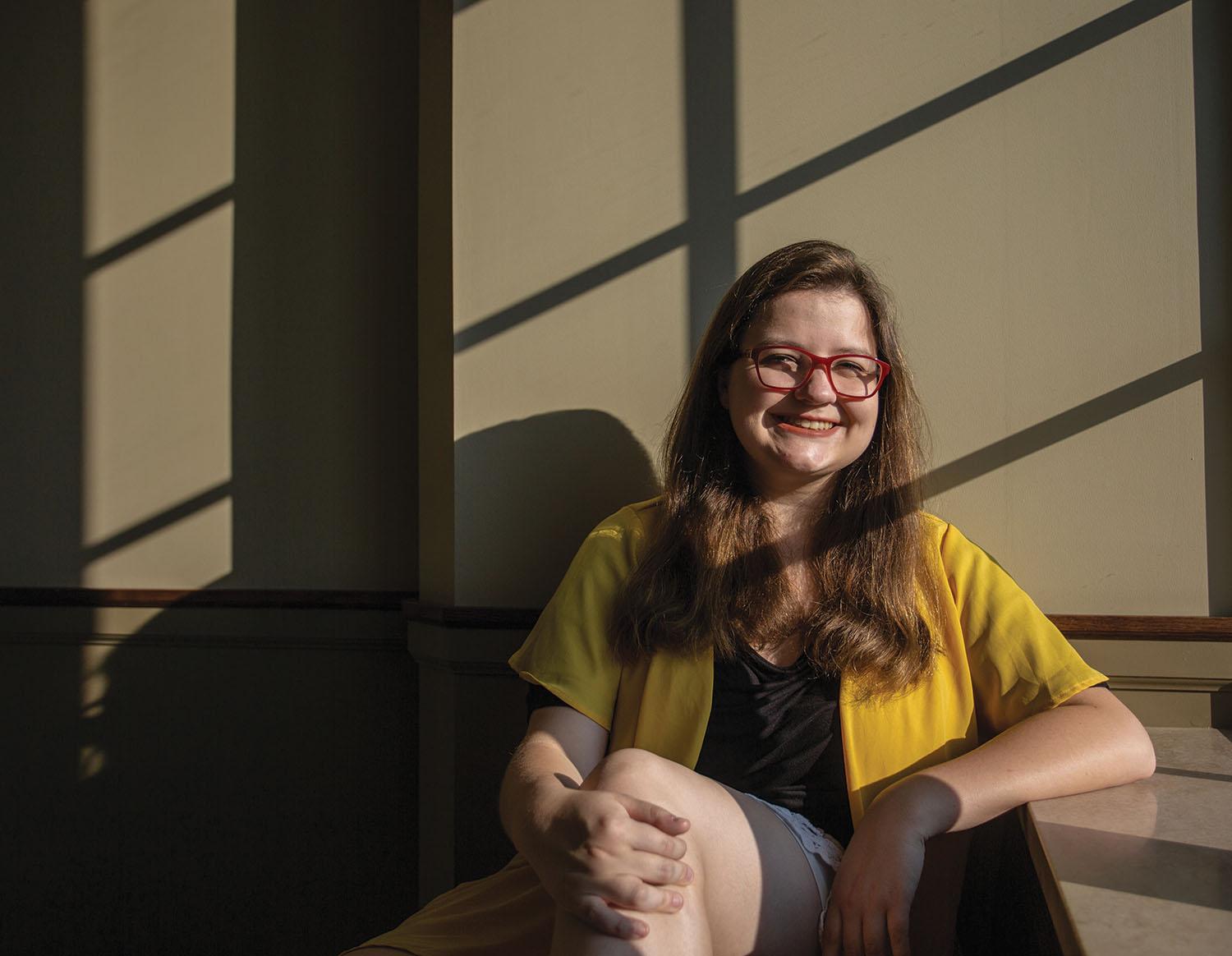 Florence native Adrianna Waters started taking speech therapy classes around the time she entered kindergarten because she had difficulty pronouncing ‘R’ sounds, and continued to take the classes until about the seventh grade. She would slow down and focus on the movements of her mouth in order to form them properly. “My first memory of speech classes was the first time I got pulled out of class for them,” Waters said. “I was pulled out in the middle of an assignment, and I remember that my teachers had to finish the booklet for me since I was in therapy.” (Photo by Chloe Cooper.)

I never learned why Ms. Fountain disappeared. I only learned that my speech impediment did not.

After a year on the forensics team, though, my enunciation improved. My coaches continued to point out my mistakes, but I believed it was only because enunciation had to be as perfect as possible. I thought my speech impediment was unnoticeable in casual conversations.

“Are you from New Jersey?” one of my classmates asked me in seventh grade.

He assumed I had an accent and would always say “New Jersey” in what he determined to be a New Jersey accent, and, evidently, my voice. He wasn’t being mean — after all, 2012 was the height of hit MTV reality show “Jersey Shore” — and I imagine he thought the comparison was either funny or clever. Rumors of my so-called New Jersey accent spread to other classmates. I went along with it and sarcastically told people I was indeed from New Jersey. I pretended to be equally flustered and amused when people asked if I was Snooki’s cousin.

I never told any of them the reason my voice sounded different was not because of an accent.

Admitting I had a speech impediment would be admitting the speech therapy classes I’d endured for years were a waste of time. It’d be admitting I was different— a fact I tried desperately to avoid in middle school. I didn’t want my identity to be associated with a voice that sounded more like a child’s than a teenager’s. I didn’t want people to know that even at the age of 13, I failed to correctly pronounce difficult “R” sounds, making it difficult to say words like “error” or “barrel.”

I didn’t want to admit to myself that my speech impediment was still there.

In eighth grade, I experienced a shift in the way I participated in forensics. For the first two years, I’d competed in events that didn’t really fit me. I enjoyed those events, but I didn’t do well in them, and I always felt there was something missing.

When I switched from acting events to speaking events, I felt a connection, and with this connection came dedication.  The emphasis on enunciation elevated. I practiced more than I had my previous years, and this did wonders for my voice. At the end of middle school, I assumed this switch fixed my speech impediment. I thought forensics had done what my speech therapy classes had failed to do.

I joined the high school forensics team, comforted by the fact that my brother was a senior while I was a freshman. During a forensics summer camp, my brother mentioned my new coaches had talked about my speech impediment.

“Did you tell them about it?” I asked him, embarrassed.

“Then how did they know I have a speech impediment?” I asked.

“They could probably just tell, Adrianna,” he said as if it should have been obvious.

For the second time, I joined the forensics team and gave off the immediate impression that my speech was impaired. I was ironic: a girl who could not speak properly giving speeches. I was determined to stamp the impediment out of me through rehearsal and maturity.

With determination, I developed a love for forensics that exceeded what I felt in middle school. I became more up-to-date with current events and grew passionate about the speeches I gave in Extemporaneous Speaking, a limited preparation event in which I answered questions about politics. In Impromptu Speaking, I analyzed and gave speeches about quotations with little preparation. I enjoyed writing and performing my own speeches in Original Oratory.

The more involved I became, the more forensics became a part of my identity, and I wasn’t going to let my speech impediment ruin something that had become engrained so deeply in me. I practiced nearly every day, and with the constant speaking, my enunciation improved. People made fewer comments about my speech being difficult to understand. I started to place at every tournament. I assumed my success was evidence that my impediment was behind me.

Once again, I was wrong. 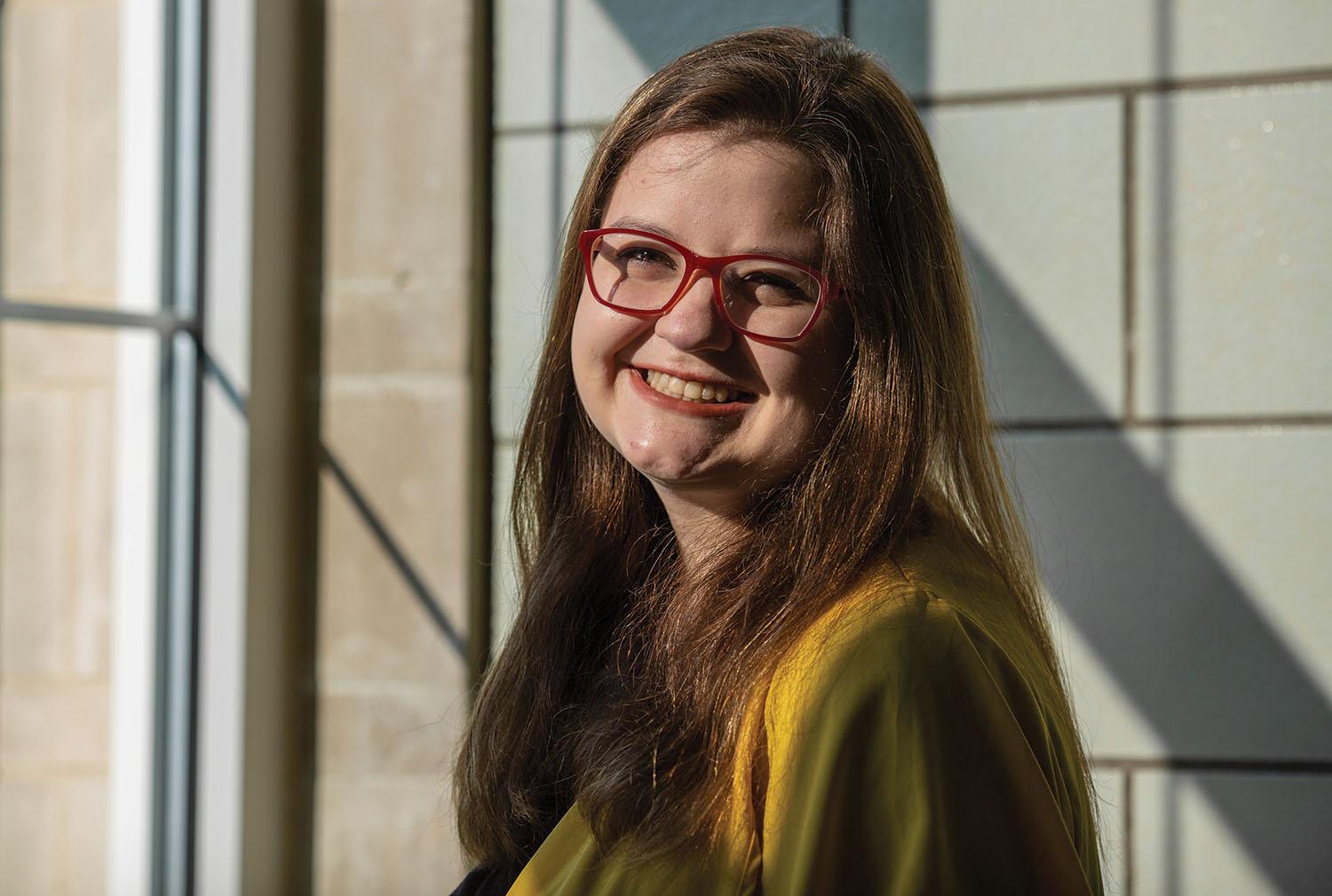 Florence native Adrianna Waters joined the speech and debate team in sixth grade, following in her brother’s footsteps, although he wasn’t the reason why she continued to participate in high school. “I enjoyed being able to express my thoughts or opinions through speeches, and the skills I learned through speech have helped me so much,” Waters said. (Photo by Chloe Cooper.)

At the beginning of my junior year of high school, I needed teacher recommendations for my Governor’s Scholar Program application. One of my teachers wrote that it was surprising I spoke up in class so much considering I had a speech impediment. This struck me because I never mentioned my speech impediment, and I didn’t talk much in class. Evidently, it only took a few sentences to reveal my errors.

Though I was on the forensics team and thought I was getting better, it was still so painfully obvious that I couldn’t talk. It seemed like the same story was repeating itself.My speech impediment was like this pesky gnat that followed me around, and just when I thought I had gotten rid of it for sure, it popped up in the most agonizing ways.

The accent debacle from seventh grade repeated itself. People constantly asked me where I was born. They assumed I was from Boston, New York, New Jersey, Wisconsin or even England. I told them I was born in Kentucky and left the conversation at that.

During my final two years of high school, I was a co-captain of my forensics team. I became more serious, more competitive.

It became more imperative to be understood. My coaches gave me several pieces of advice: to look at my face in the mirror, to record and listen to myself and to practice while speaking staccato, which meant pronouncing my words as shortly as possible. All of these practices were supposed to cure my enunciation troubles because, as one particular coach put it, it was all about “muscle memory.”

I didn’t know how to tell her the muscle memory in my mouth didn’t work correctly, that it hadn’t worked since I failed at speech therapy classes in elementary school and that my speech impediment wasn’t going to disappear after rehearsal. But I didn’t know how to articulate any of those things.

So I took her advice and practiced.

Forensics was an intense version of the speech therapy classes that failed me in elementary school. My coaches were an upgrade from the therapist who left me without a celebratory party. It didn’t cure my speech impediment. Perhaps nothing will “cure” it, only make it better. I’m OK with that now in a way I never used to be.

A girl with a speech impediment is not supposed to fall in love with giving speeches. She’s supposed to be the one who fears public speaking more than anyone else. But I didn’t become that girl. I learned to love speaking, even if I analyzed quotations in a “cartoon voice” or discussed the merits of elections with an unintentional “New Jersey accent.”

Forensics gave me the opportunity to speak about topics I was passionate about. My sophomore year, I wrote a speech on mental health. My junior year, I spoke about political strife. I prepared evidence-backed answers to difficult questions about current events. I became a part of a community that shaped who I am as a person. My speech impediment didn’t stop me from achieving those activities, so I wasn’t going to pretend it didn’t exist anymore.

Since graduating high school, my time as a member of the forensics team has ended. I made the decision to focus my time on other areas in college, such as academics and writing. But I will never forget how forensics changed the way I view my speech impediment.

People still ask me where I grew up. They still assume I have an accent of sorts because my voice doesn’t seem to “fit,” especially in a southern state. I’ve stopped going along with it like I did in middle school. I’ve started to find it funny as I’ve kept a list of all the places people have thought I was from. I’ve started telling them that the reason I sound different is because I have a speech impediment, and no one has judged me for it.

Earlier this semester, a student told me I sounded like I was from Australia.

“Huh, I haven’t heard that before,”I thought,and I added it to my list.

Perhaps one day I’ll be able to add the rest of the continents to my list.