One daisy at a time: Local floral shops continue business amid COVID-19

Many local businesses across the country have had to close their doors due to the COVID-19 pandemic. Large group gatherings have been canceled or postponed per governmental orders, including proms, graduations and funerals. While many restaurants are still able to continue operation by using takeout or delivery services, florists rely on certain activities to keep their businesses blooming.

Jules Sandlin, owner of Jules with the Flowers, is doing all that she can do to keep business running as usual and has not let her busiest season lack the growth it needs. Sandlin is abiding by government regulations and has seized foot traffic in her shop by coming up with other methods of doing business.

“We have been lucky, though I have lost spring weddings,” Sandlin said. “We have shifted to greenhouse plants. We are getting into this being the new normal.” 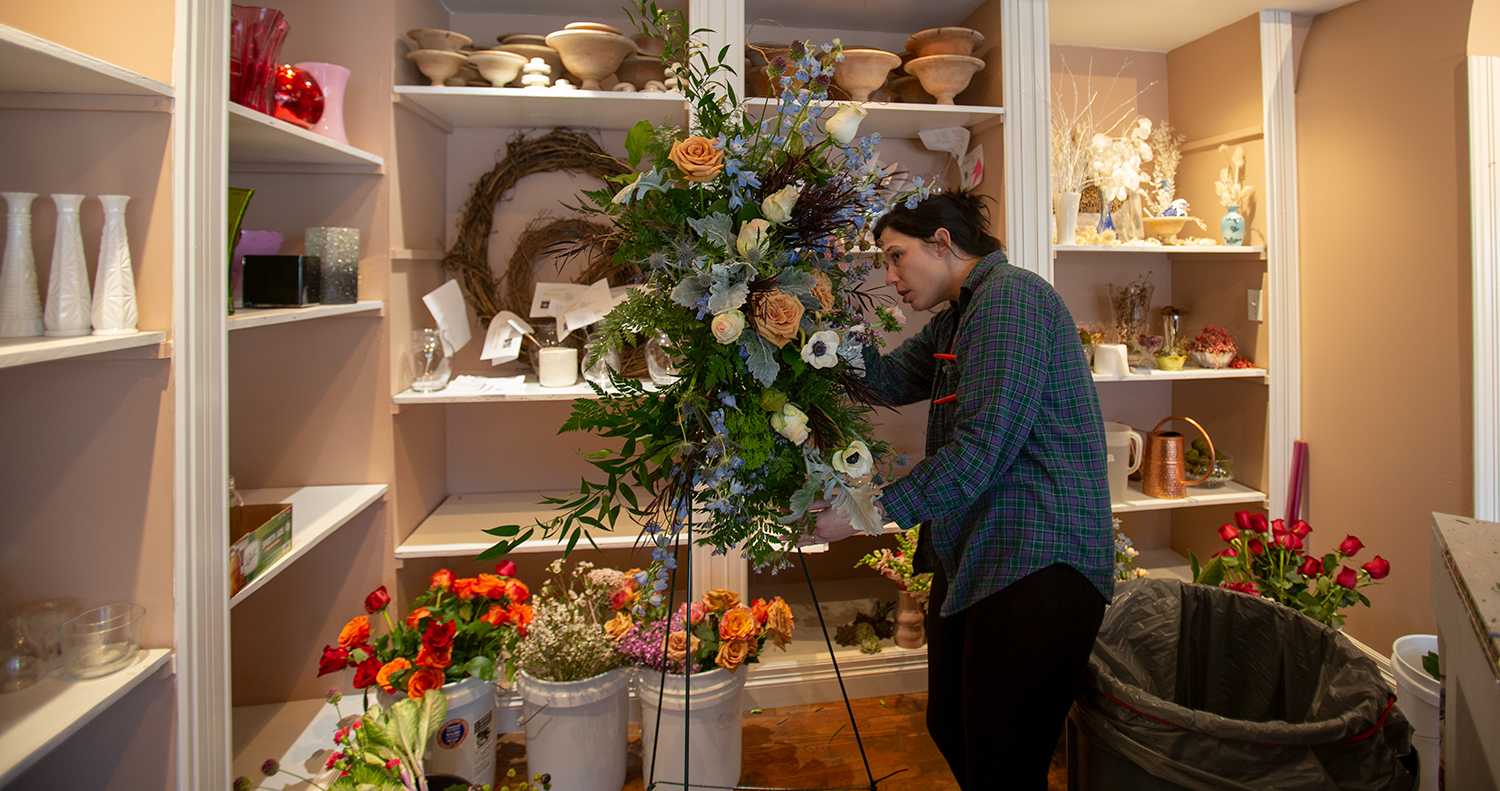 Jules Sandlin works on a flower arrangement on Feb. 13 that she is preparing for a funeral. Sandlin opened Jules with the Flowers at her location on Broadway Avenue in Bowling Green in October 2019, and she works there with her mother. Prior to its opening, Sandlin did her work out of a house in a small studio. Sandlin was a horticulture major at WKU, where she graduated in 2011. She had taken floral design classes and was more interested in soil science, which she worked with after graduation, but she began making floral arrangements after she started working for a florist and decided she wanted to do floral design on her own.

She said this shift has not been easy nor conventional but has been reassured by the public that keeping her business open was the best thing she could have done in this time.

“I went through thinking ‘what the hell do I do now?’” Sandlin said. “But we are pushing through and doing OK. So many people have said ‘thank you’ and that makes me feel like I am doing the right thing.”

Sandlin has found new ways to engage with her customers, primarily through using Instagram. Every day that the shop usually would be open for foot traffic, she posts available plants, flowers and other items on the Jules with the Flowers Instagram story with the sale price attached. People direct message her which of the items they want and she does the transaction with them all online prior to sitting their labeled purchases outside of the shop for them to pick up.

“Older people are learning how to use Instagram because they want my plants,” Sandlin said. “That is bringing in a whole new population of people that will remain into the next seasons.”

Sandlin’s advice to other small business owners centers on finding other outlets to reach customers and sources of exposure. She said the camaraderie she has built with other smaller businesses during this time has been a great source of help and is beneficial in many ways.

“Adapt and adjust,” Sandlin said. “Our business is not going to be the same business, so we have had to look at other outlets. Ask for help when you need it.”

Michele Mefford has been a loyal customer with Jules with the Flowers since Sandlin’s pop-up shop days at Spencer’s Coffee nearly two years ago. She said the enjoyment she gets out of visiting Sandlin’s shop is one of the main reasons she continues to support her during this hard time.

“She has made it a very safe and caring environment,” Mefford said. “When her store was open, it was one of those places you just felt good walking into.” 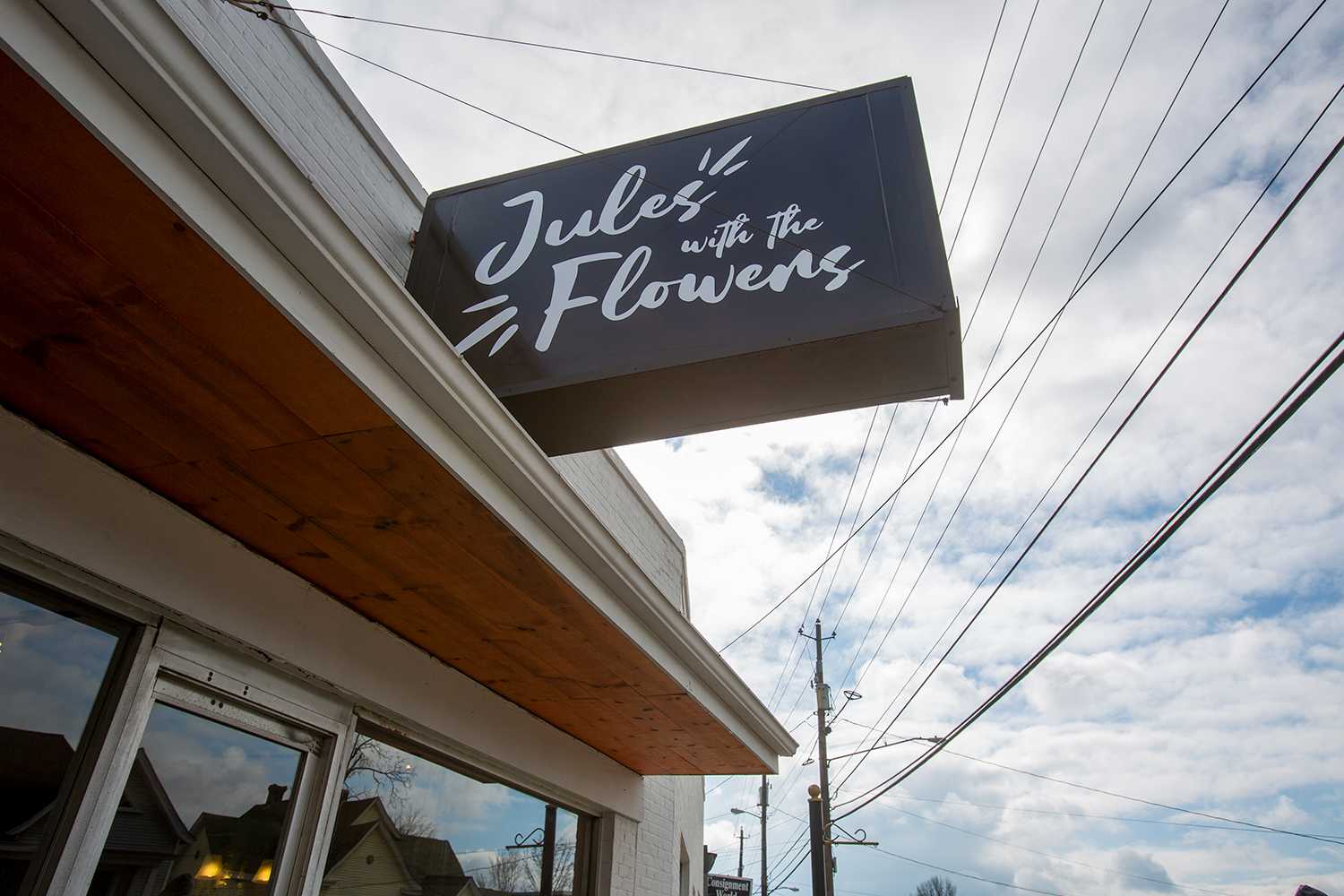 Jules with the Flowers is located on Broadway Avenue in Bowling Green. Sandlin said since she works with people at different milestones in their lives, she gets to see both happy and sad moments. “People buy flowers because they’re either really happy or they’re really sad, or they want to show some kind of emotion,” she said. “It’s not just for nothing, and I get to be there through all of that.”

While many people are unable to go out and do things that make them happy or help them, Mefford said being able to still get plants in a safe and supportive way has helped her take her mind off things.

“It has been my therapy during this time,” Mefford said. “Planting and bringing something up that is going to live is an amazing feeling during a time when so many are dying.”

“It is so important for the community during this time to support our local shops,” Mefford said.

Tyler Janes, owner of Flowers Around The Corner, just passed his one-year anniversary being in business in Bowling Green and has made the decision to keep doing business as well.

“The main thing has been our change in delivery as we can no longer have customers in the showroom,” Janes said. “It has primarily been a change within customer interaction.”

Janes said the cancellation of prom and other prominent events has been where he has seen the biggest slowdown. However he has “still been very busy.” He still has his average amount of deliveries, but reasons for people wanting the flowers have shifted. Instead of sending out large quantities for events like weddings or prom, arrangements are more for friends and family being kept in due to COVID-19.

“You have to carry on and persevere,” Janes said. “The main thing is that no matter what business area you are in, you have to adapt.”