Three WKU poets were willing to open up about how poetry has helped them or how it can help others cope with mental illness.

Tom Hunley has been teaching poetry at WKU for 16 years and started writing it 31 years earlier when he was a teenager in Seattle. He said he’s a fan of poems by Billy Collins and Mary Oliver.

“I was angsty and depressed like everybody when they start writing poetry, and it really helped me get through some tough times then,” he said. “It just gave me someone to talk to I guess, even though it was just a notebook.”

According to the American College Health Association’s 2017 national assessment of U.S. college students, 39.3 percent of college students surveyed “felt so depressed that it was difficult to function,” 60.9 percent “felt overwhelming anxiety” and 12.1 percent “seriously considered suicide” any time in that past year.

Though Hunley said poetry should not be used as a substitute for therapy or talking to another person for help to cope with different emotions, he also said he eventually didn’t only want to make poetry when he was feeling down. At some point, he started writing about different moods, such as happiness. Hunley tries to encourage his students to do the same.

“If you just have a big, very difficult to handle emotion, and there’s no word for it, and it’s nameless, it’s just kind of like this shapeless monster,” he said. “If you could name it, maybe you take some of the power away from it.”

He said his first experience teaching poetry in 1995 with prisoners. This took place while working on his master of fine arts is a good example of others using it as an outlet.

“They were really the best students you could have,” he said. “They were very respectful. They were just really grateful to have visitors offer them anything.”

Even students who don’t have a diagnosed mental health problem can still benefit from using poetry, and writing a poem can give something a shape to allow someone to feel better, Hunley said.

“I think a lot of times when we’re not feeling well is because we’re living in chaos,” Hunley said. “We’re thinking chaotically.”

Poems that follow a formal style can help deal with this chaos since “they demand order and structure,” Hunley said. Formal types of poetry include anything with a strict meter or type of rhyme, such as a sonnet.

In summer 2017, one of Hunley’s graduate students, Will Brown, died by suicide, but Hunley didn’t receive the news until spring 2018.

“He was a very committed poet,” Hunley said.

A line from one of Brown’s poems, “Broken on Stones is Where the Healer Starts,” stated, “We knew suicides who birthed us to hurts.”

“I imagine he was using poetry to try to make some sense out of some things,” Hunley said.

Hunley wrote a poem about the student called “Will Be Done” at rest stops on the way to a poetry festival in New Orleans.

Did you rage as day broke with its peach light, Will?

Sometimes, to write a poem, you have to go places

where it’s so dark and so silent you fall and keep falling.

-excerpted from “Will Be Done” by Tom Hunley

Emily Houston is a senior creative writing major from Winchester. She started out writing fiction but and began to focus on it more recently after she started reading poetry she liked, such as modern poet Tony Hoagland, which is one of her favorites lately. She said she feels like she’s better writing with a shorter format, like poetry. 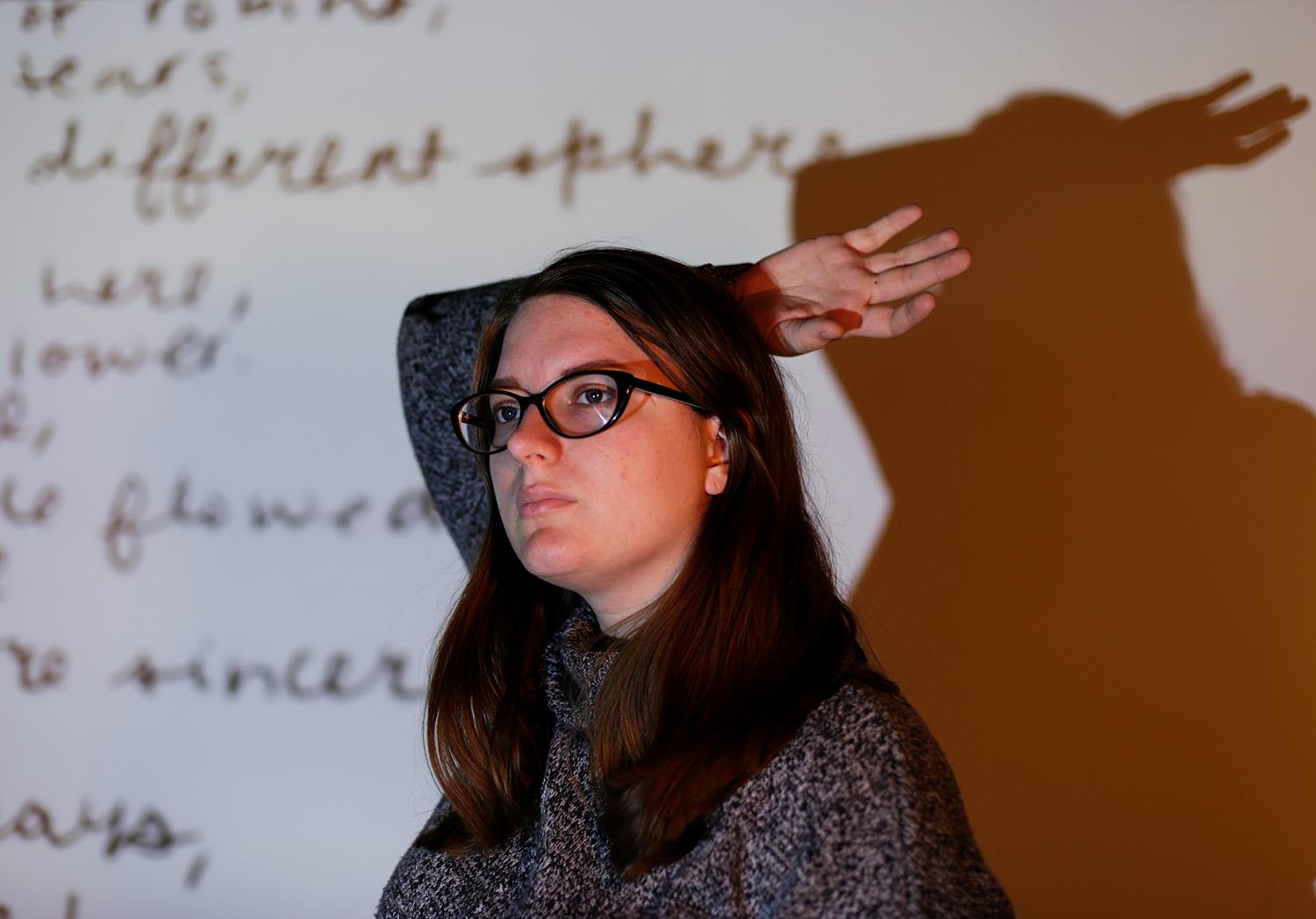 Winchester senior Emily Houston is a creative writing major who began writing poetry in college. “Sitting down with paper and pencil can be really therapeutic,” Houston said. “It helps you think about life in a bunch of different ways and understand yourself and others.”

“It ended up being the better avenue for what I wanted to say,” she said.

Poetry from other students was the earliest work Houston started reading. She said seeing their work made her realize there are many possibilities for poems. She used to think that a lot of poems were like American poet Walt Whitman’s work, but she realized it extends beyond that style. For her own work, Houston writes mainly with Japanese forms, such as haibun or haiku. Houston said she realized eventually that working with fewer syllables forced her to say more with less space.

“Even if the poem isn’t seen by anyone, it can release emotions,” she said. “It kind of gives you the method that you need to maybe talk about something.”

Houston said writing poetry taught her that she can write about an issue she’s dealing with without saying exactly what it is. She said she didn’t think at first that anyone would care to read poems about her life, but she realized the content does matter.

“Sitting down with paper and pencil can be really therapeutic,” she said. “It helps you think about life in a bunch of different ways and understand yourself and others.”

Another student also uses poetry as a creative outlet as well.

Originally from Nashville, Natalie Turner is a senior broadcasting major with a minor in creative writing. She started writing poetry in second grade, beginning with poems about each student in her class. Her early writing inspirations were Shel Silverstein and Emily Dickinson. In high school, she wrote blank verse, which is poetry without rhyme that uses ten syllables per line, every day. She continues to write a lot of free verse, which does not rhyme or have a regular meter. 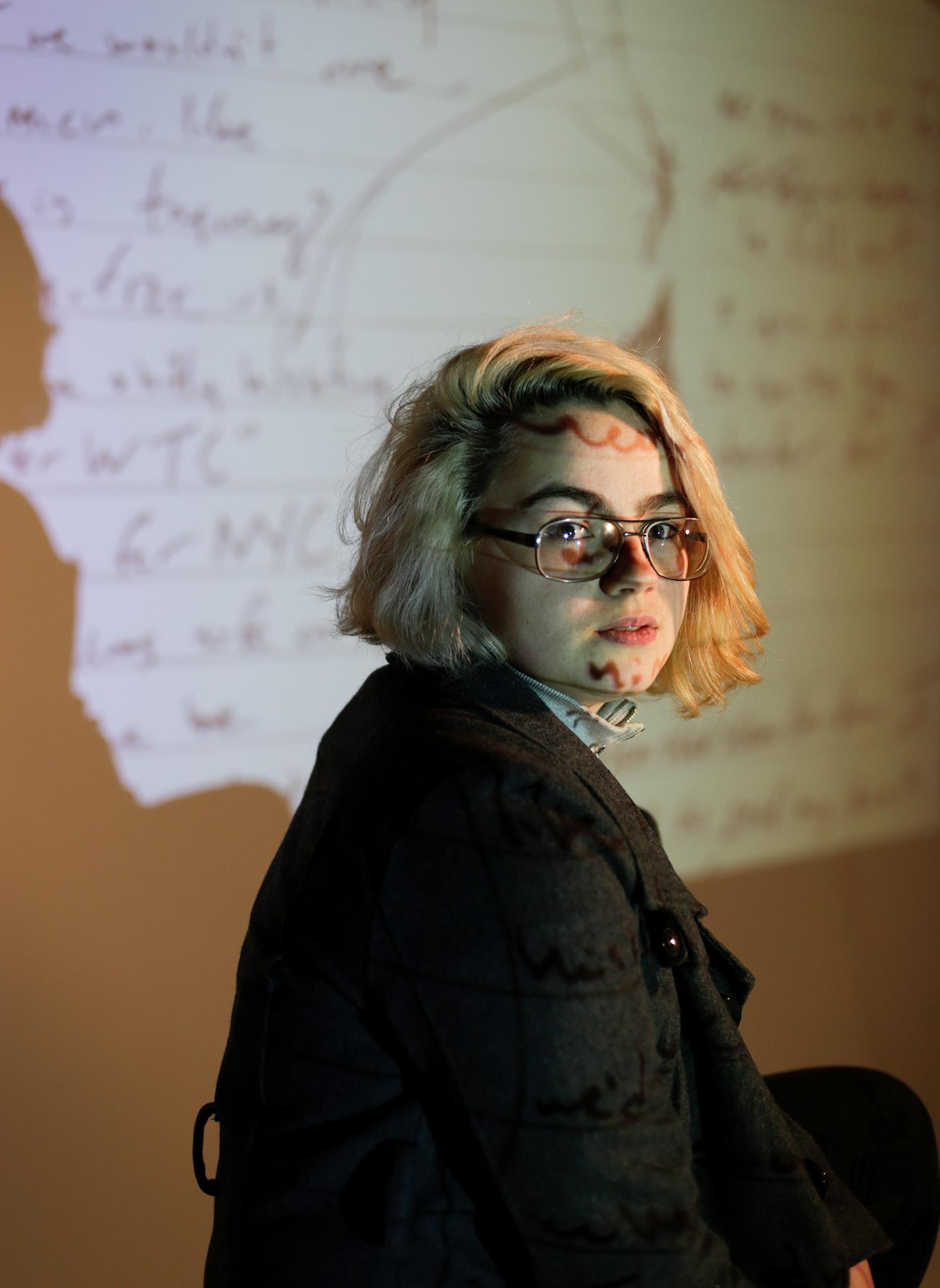 Nashville senior Natalie Turner has a minor in creative writing and has written poetry since she was in the second grade. “Instead of acting on some stupid thought, it’s far healthier to put that in a poem,” Turner said.

“It’s extremely difficult to actually tell someone how you feel,” Turner said. “When you use a poem, there’s so much more nuance to what you’re saying.”

Turner has struggled with her own mental health and said she accepted having anxiety quicker than depression. She said she was initially concerned about how medication would affect her writing, thinking she may not feel connected to her creative side or characters as easily.

She said a lot of artists think mental illness can help their creative process. However, Turner’s medication helps her manage panic attacks and she is still able to write without having that ability dampened.

“When you have those mental illnesses, or any mental illness, you get a lot of thoughts that don’t feel like they truly belong to you,” she said. “But the thing is, they do. You can’t just let them rot in your head. You have to bring them out. Instead of acting on some stupid thought, it’s far healthier to put that in a poem. You might even reach a new conclusion by the end of it.”

She said she thinks depression can be used to be productive, and that is her main goal. Turner said she doesn’t want to glorify sadness and that poetry helps her explore unrealities.

“It doesn’t need to be easy for people to understand,” Turner said. “It just needs to communicate.”

Turning a thought into literature helps since it makes it into something physical, she said.

“You need to get it on the page,” she said. “What happens after that is up to you.”