Messages like “A person’s a person, no matter how small,” “A baby’s heartbeat starts day 21” and other pro-life sentiments have been written in colorful sidewalk chalk around campus.

WKU Students for Life and pro-choice students are butting heads as a multi-group chalk feud ensues on campus.

Students for Life organized a chalking event for its members on Sept. 6, and since then they have received reactions ranging from erasure of their chalk to interactions on Instagram to chalk messages in response to the originals.

“The response was pretty immediate,” said Covington senior Gabrielle Krumpelman, “I was mainly taking pictures while people were chalking for our group. I saw somebody rub their foot on one of them, but I also saw people acknowledge it or turn to a friend and be like, ‘Wow.’”

Nashville senior Emma Cox, Students for Life’s  president, said that while she was chalking she confronted two people that smudged the chalk while she was still in the area. When she spoke to them, they chose to walk away.

Students for Life was founded last year by Cox and junior Katelyn Noll. Their goals this year are to increase campus presence and to start a larger conversation about abortion at WKU. The group decided that since chalking is low effort, easy to organize and spreads a message quickly, it was a good way to begin. 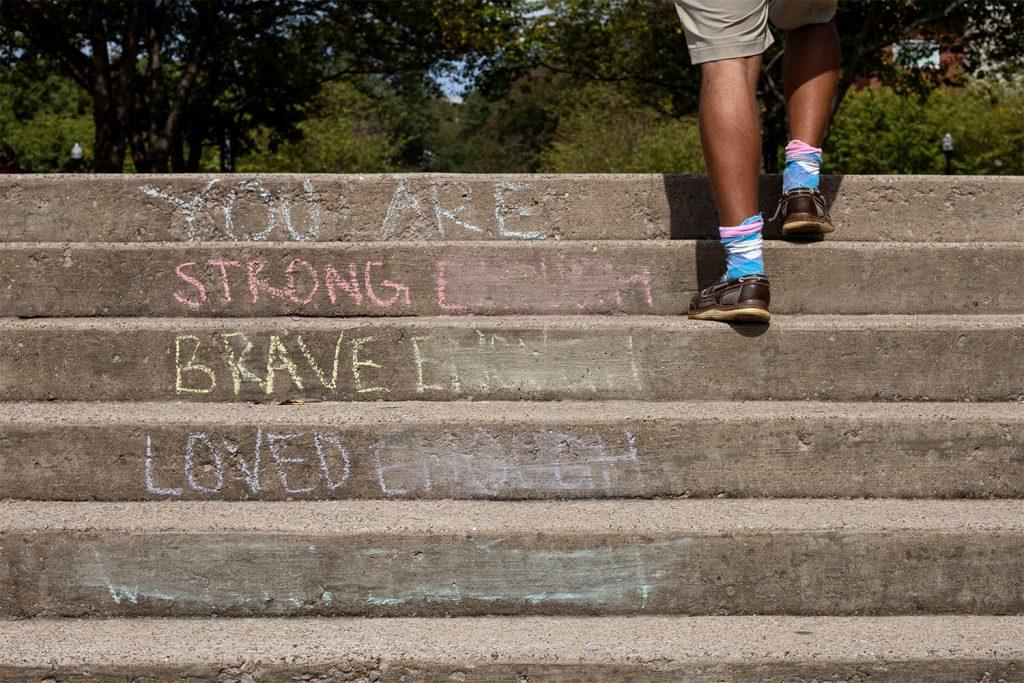 WKU Students for Life, an anti-abortion group, left a variety of pro-life chalk messages outside Downing Student Union on Sept. 10. According to Student for Life’s president, Nashville senior Emma Cox, chalking was a good place to start in raising awareness. (Photo by Charlie Haynes)

They chalked from 1 to 3 p.m. on Sept. 6, and by 5 p.m. members of the organization were receiving messages from friends saying that almost all of their chalk had been smudged, scratched out or doused in water.

The group decided to chalk again on Sept. 9.

“After a lot of our chalk was defaced, we went around again to just put more, not to cover up any of the other chalk anyone else had put, but just to replace some of the chalk that had been defaced,” said Hunter LeBlanc, a senior from Hickman County.

LeBlanc, Cox and Krumpelman all expressed that they wanted to continue having conversations about abortion on campus, welcoming pro-choice students to engage with Students for Life off of social media.

“It’s hard to respond to assumptions, so I feel like really having conversations is where action and thought and true engagement takes place,” Krumpelman said, “We don’t want to be a blind face, we want people to see our faces and talk with us on campus.”

Students for Life have planned events through the rest of the semester, including the Cemetery of the Innocents in October. The event is hosted by Students for Life groups nationwide and entails a display of multiple crosses meant to represent aborted fetuses. Cox said that they are excited at the possibility of a pro-life protest.

Hilltoppers for Life held a Cemetery of the Innocents event in 2012 which received national attention after an art student placed condoms on crosses meant to represent aborted fetuses.

Abigail Raley, a senior from Bowling Green, has started organizing against Students for Life. Raley said  through her education, she has learned how pro-life legislation disproportionately affects people who are disenfranchised, poor or minorities. 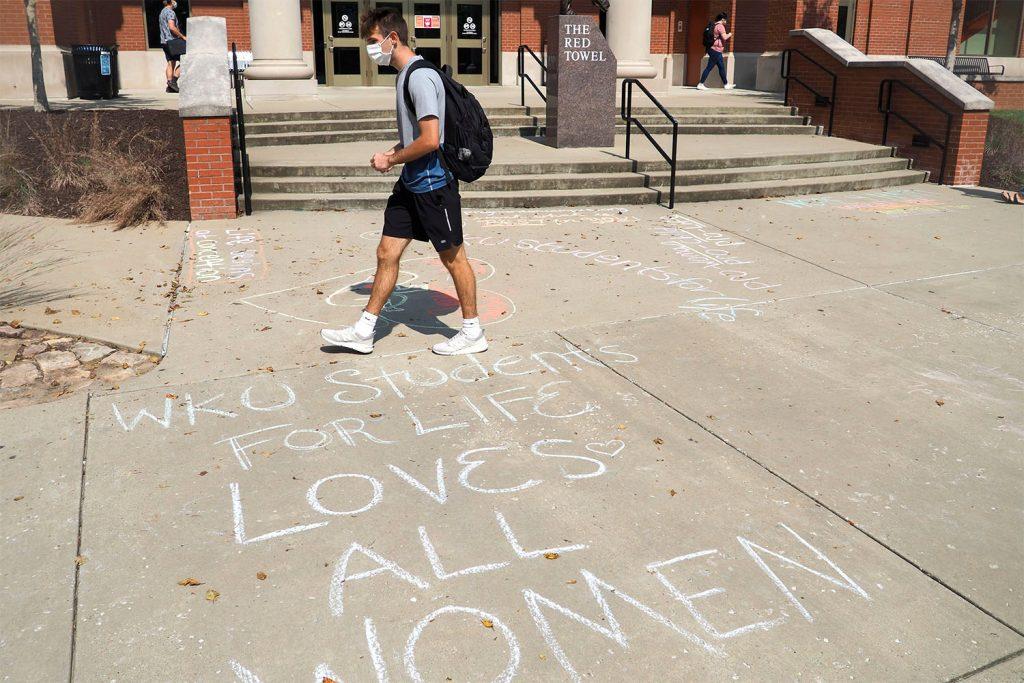 Cox said the group has not defaced any of the pro-choice messages written in response to their pro-life chalk. She asks that the chalk left by the student organization receive the same respect. (Photo by Sebastian Tingle)

When she saw other students commenting on the Students for Life Instagram page in opposition of their actions, she decided to comment herself, expressing that any students interested in organizing against them could contact her.

Like the members of Students for Life, Raley thinks that chalking on campus is a great and effective way to spread a message. Still, she planned to erase some of the chalk written by Students for Life.

“I would say that their thoughts and opinions and ideas are hurting other people on campus, and that is where I have an issue,” Raley said. “There are women on campus that have had abortions, and when you write things like ‘Abortion stops a heartbeat,’ that hurts those people. It makes campus a less inviting, open environment for them to be in.”

Florence sophomore Emma McGee planned on joining Raley’s group to erase chalk but saw that it had already been scratched out and had water poured on a majority of it.

McGee was on the top floor of the Downing Student Union where she could see members of Students for Life chalking on Sept. 6. She commented on a post on Cox’s Instagram and the two exchanged direct messages.

“We kind of respectfully shared our opinions back and forth, I wouldn’t say to come to a common ground because that probably won’t happen, but to understand and show that there’s nothing personal about each other that we dislike but that we disagree strongly,” said McGee.

During the exchange, McGee expressed interest in starting a pro-choice group on campus. She said that she has been looking into student organizations and what it takes to start them.

“I want to empower women in any way that they would choose to go about a pregnancy, and I think that it is extremely important to have a community where women can go and feel like they won’t be shamed for any decisions they make about their own body,” McGee said.

Cassandra Wiley, a freshman from LaRue County, has also considered starting a pro-choice group at WKU. Wiley, who has spoken to Raley about organizing a protest against Students for Life, said she thinks that she would be able to gauge interest in a formal pro-choice student organization if there is significant turnout at the protest.

Wiley used to be pro-life herself but said that as she researched more, she didn’t agree with the pro-life idea that embryos could be prioritized above women. Wiley said that because she is a lesbian, the choice to have an abortion is one she will never have to make. Still, she wants to fight for other women.

Raley, on the other hand, has had first-hand experience with the decision.

Before she had her abortion, Raley was still pro-choice. She said that since she has had an abortion, she has been able to better understand why it is a difficult situation for women to be in because of how bad it was for her.

“People, unless they’ve been in that position, they just can’t understand”, Raley said.

Raley feels that the chalk messages of Students for Life are antagonizing the people on campus most affected by this issue. 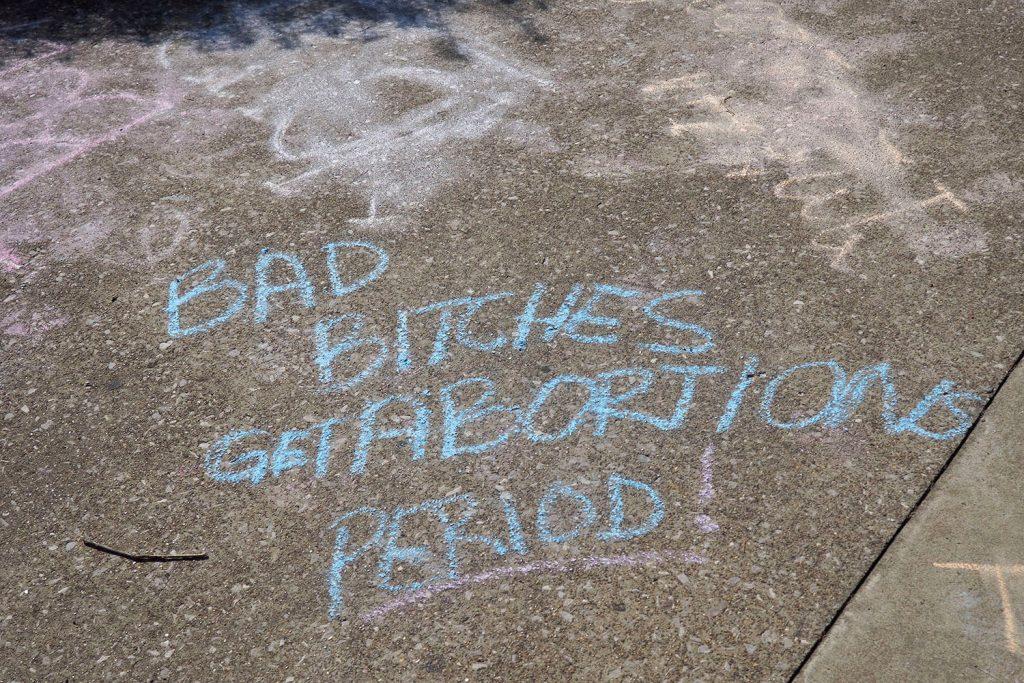 As an almost immediate response, pro-choice students began erasing Students for Life’s chalk messages and replacing them with their own. Students for Life originally began chalking on Sept. 6, and messages from both groups can still be seen on campus. (Photo by Sebastian Tingle)

Cox said  that the only intentions in Students for Life’s chalking were to shed light on the issue and to provide their stance. They did not intend to attack or disrespect anyone, she said.

“It was just sad because I feel for those people that felt we were being hateful or felt we were attacking them, and it shows how important it is and how much we do need to continue to persevere and reach out to those people and be loving and respectful,” Cox said.

Similarly, Raley wishes to continue having discourse with Students for Life and intends to attend their meetings.  She said that she has no intention of being disruptive or loud, but that she would like to be able to better understand the group and would like other pro-choice students to join her.

Though both Students for Life and the students actively organizing against them are attempting to be respectful of one another, other students have written profane messages in chalk beside both pro-life and pro-choice messages.

Cox said she would like to ask that the people extend the same courtesy that Students for Life extends and not erase the opposing chalk, no matter what is written.

Both Students for Life and the organizing pro-choice students plan to continue moving forward for their respective causes.

“Any social change throughout history has come about through the horrors of whatever is being changed coming to light, and that’s what we want to happen.” LeBlanc said.