Review: The Den, by Denny’s

Sometimes, when the depression and crippling self-doubt aren’t quite enough, life really likes to lay into me. I especially learned this last year, when Popeyes Louisiana Kitchen packed its bags and walked out of my life like so many before it.

I wasn’t sure if the Cajun-flavored chasm in my heart could be filled. I was a mere shadow of the man I once was. I was almost ready to renounce my faith when a sliver of light filtered into my life.

I heard of a new project on the horizon: enigmatically called The Den by Denny’s.

Before I could say “I’ll take an original Grand Slamwich® meal, five chicken tenders, and a heaping side of onion rings” because I’m an English major who doesn’t understand how money works The Den found its way into my life and made me whole again.

NOT YOUR DAD’S DINER

I once found a sympathy card that read “when one star dies, another is born.”

After Popeyes Louisiana Kitchen’s untimely exit, there was a poll. Based on student opinion, there was a resounding rallying cry for a breakfast-based restaurant.

And thus, The Den was born.

For comparison’s sake, Topper Grill and Pub had an allocated budget of $479,500 from WKU’s auxiliary budget, with $465,840 of that amount spent.

The Tower Food Court’s about page features a description of The Den. It sounds like it was written by a sad, single dad who wants Karen to know it’s all his fault.

Come in and you’ll see this is not your dad’s diner. This is a place with a vibe. Where you step right up to the counter and order a hand-smashed burger. For breakfast. Or a Grand Slamwich®. Late at night. This is the local hang-out where friends meet up to chow down. Whenever. Whyever. The look is lounge. The feel is easy-chair communal comfort zone. The menu is breakfast all-day, plus sandwiches, burritos, salads – all made the way we eat today. Saucy, spicy, slightly unruly, proudly old-schooley. (Hand mixed shakes, anyone?) This is “The Den.”

Fed up with the mystery and intrigue nipping at my mind’s heels day in and day out, I put the skills I gleaned from the one semester I was almost a journalism major to good use. I got in the trenches.

I went to breakfast. And then I went back 10 more times for the sake of hard-hitting, investigative journalism.

A PLACE WITH A VIBE

The Den did, in fact, have a vibe.

The renovations are sizable, but subtle.

All remnants of past restaurants — Freshens and Popeyes Louisiana Kitchen — are erased, replaced by a single cash register and an extended area for cooking and food preparation.

On one visit, Kendrick Lamar’s “Humble” played over the restaurant’s speakers. I thought the song was skipping, until I realized The Den was playing a clean version, which was mostly silence. I didn’t mind the censored version one bit — I’m a child of God, and I was put on this earth to eat pancakes and pet dogs. I assume The Den has a firm “no pets” policy, so I had to do without the latter.

My food arrived within a couple of minutes. The Grand Slamwich® featured two fluffy buttermilk pancakes, scrambled eggs, three sausage links and two strips of bacon. I was surprised by the amount of food, but not at all upset. I have a long way to go if I’m expected to get a call from Coach Sanford next fall.

Chicken tenders are crispy and fries are fresh. The “hand-smashed,” titular Den Burger is tasty. Due to journalism, I forced myself to try nearly everything on the menu, and I only had one regret.

The Maple Bacon Milkshake tastes like garbage. It’s an odd dichotomy marketed as a wacky menu item. I could even have foreseen this going well, but my bacon expectations didn’t align with reality.

At the outset, The Den provides a to-go menu for the more indecisive and thoughtful breakfast patron who wants to ponder their options. It also provides an inordinately useful allergen guide — setting a precedent that all campus restaurants should follow.

THE SOFTEST OF LAUNCHES

Contrary to the esoteric “Whenever. Whyever” mantra, The Den’s soft-launch hours were either a hit or a miss. It’s not The Den’s fault, as delayed construction consequently postponed staff training. Sometimes, The Den closed when they just ran out of food.

The Den is a welcome addition to our campus.

Sure, there are a few wrinkles here and there to be ironed out: The Den is still in its soft-launch phase and a new staff is still being trained. But on each visit, the staff was friendly and accommodating. Service was fast, and I usually received my food in five minutes or less.

The Den had a vibe, alright, even if it prompted me to take pause and scratch my head sometimes. It’s a local hangout, and the look was lounge. The feel was easy-chair communal comfort.

And Karen, if you’re reading this, please, come back. 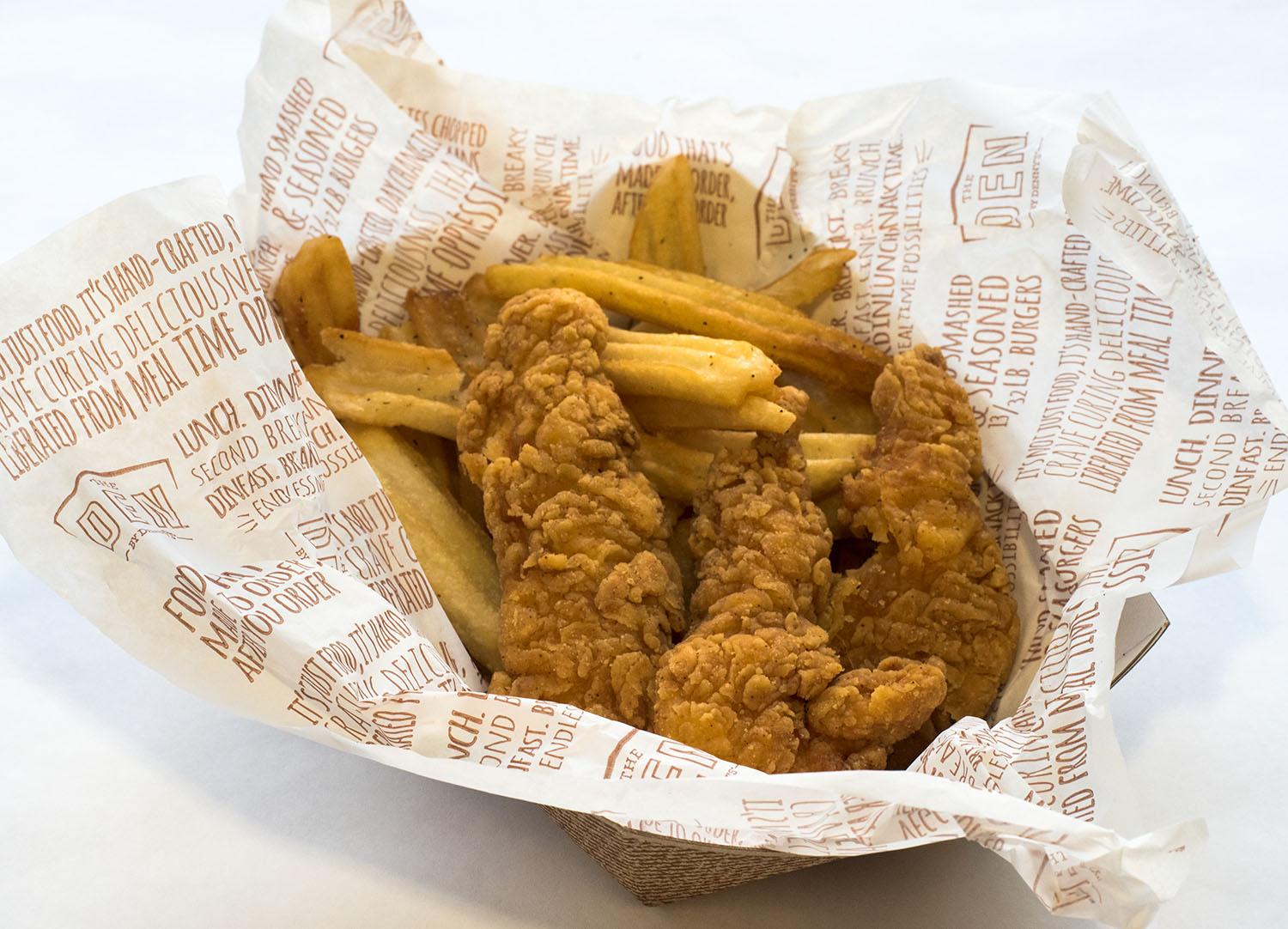