Cynthia Garrett was in her last semester of her senior year as an English major at WKU when she smelled delicious food in Cherry Hall. She followed the smell to the basement and discovered the English as a Second Language, or ESL, program. There, she met ESL students and their teachers. Wanting to become involved, one of Garrett’s professors connected her with an ESL teacher who needed a substitute.

After consistently subbing, Garrett eventually took over a retiring teacher’s position. Almost 10 years later, Garrett beams about her work as an ESL instructor and coordinator for Kentucky Skills U, an adult education service focusing on career preparation.

Skills U helps adults who are new to the United States by offering ESL classes for free. Locally, these classes are currently at the Southcentral Kentucky Community and Technical College campus, with five levels ranging from beginner to advanced.

Between October 2017 and September 2018, Bowling Green welcomed 468 immigrants, according to The Kentucky Organization for Refugees. On Sept. 10, the city honored 192 newly naturalized citizens during its fifth annual Reception for New Americans at the Sloan Convention Center.

Kham Han, a Skills U student, volunteered in this year’s reception. He immigrated from Myanmar 12 years ago, and earned U.S. citizenship while living in North Carolina before moving to Bowling Green four years ago. In addition to volunteering, Han works at a local brake factory.

“I chose the best place in Bowling Green,” Han said. “I like it and the community. I have a lot of friends here.” 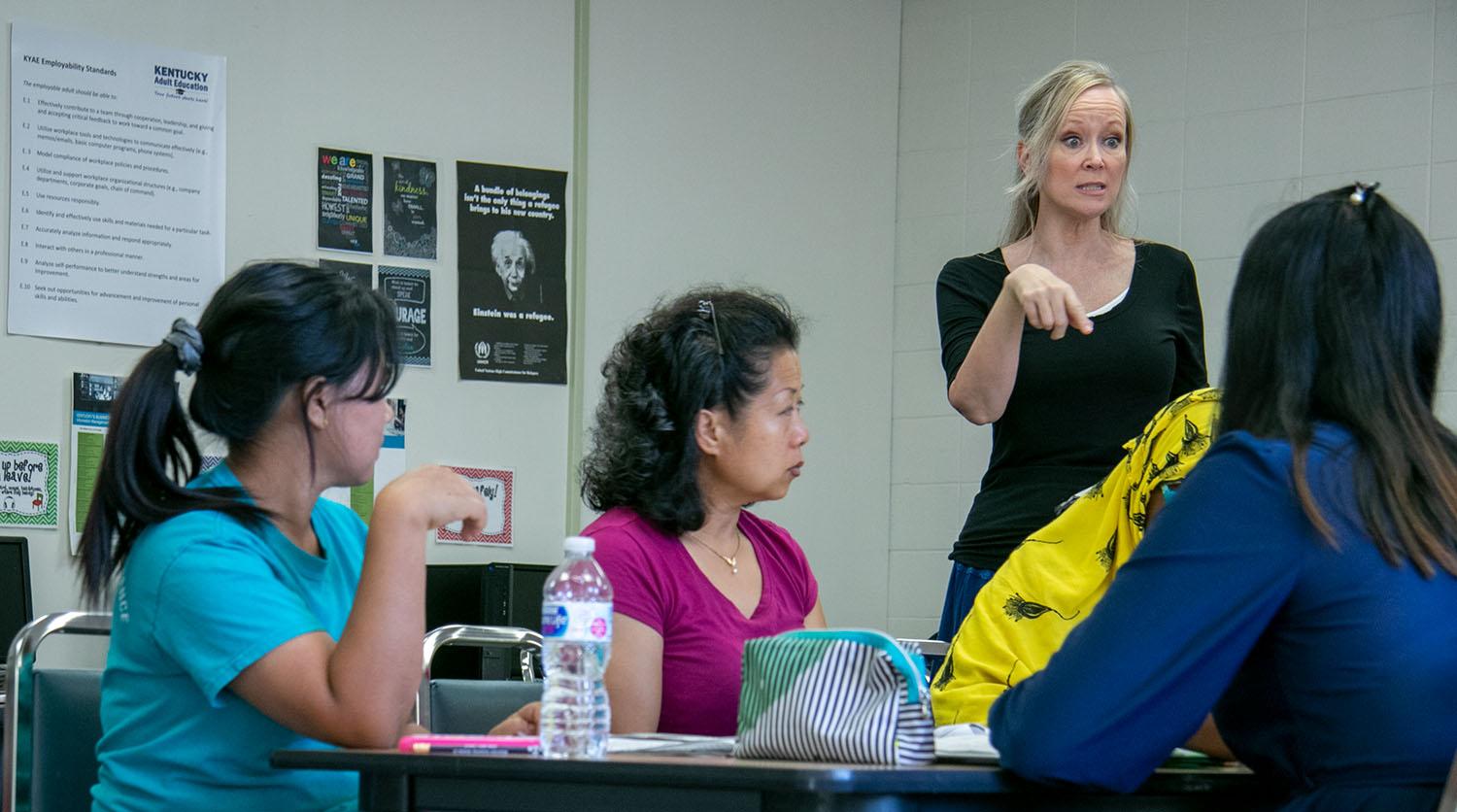 Cynthia Garrett, the ESL professor, reviews a homework assignment with her class. “You watch them and you see them making progress, and then one day it’s like a flower, and they just bloom,” Garrett said.

Bowling Green is designated as a “welcoming city.” This means that it voluntarily joined a national network that coordinates many sectors, such as government and businesses, to help immigrants find work and obtain proper documentation, all while “guided by the principles of inclusion creating communities that prosper,” according to Welcoming America.

The ESL classes are successful, with so many new students needing the services that SKYCTC does have some have to be turned away because there aren’t spots in classes, Garrett said.

Many students will continue through each of the levels progressing, as new groups of students are starting the classes. Garrett said this helps the teachers build connections with their students, and she thinks that is why students advance and return year after year.

Skills U connects students with whatever they need to take the next steps to reach their goals. Whether it is job openings, GED preparation or life skills, Garett provides her students with the resources they need, even if it does not follow her lesson plan.

“I’ll have students come in and I’ll have a whole lesson plan that doesn’t get taught because someone comes in with a life question,” Garrett said. “Things like taxes or how to take care of a baby come up, and we have to address those questions. We really educate the whole person.”

Savdy Clark came to Bowling Green almost two years ago and has worked a retail job as she prepares to potentially become a medical transcriptionist.

“(The classes have) really helped me with communication and working. They keep me from staying home and not talking to people in English,” Clark said. “I would suggest for everyone to come to the ESL classes.”

Educating students leads to building relationships with that person, as Garrett highlighted with her bulletin board in the front of the classroom. The board showcases her current students’ “wants” versus “needs,” written on origami paper that a former student sent to her after moving back to Japan.

“We get to know the students and their families on a personal basis,” Garett said in reference to her bulletin board. 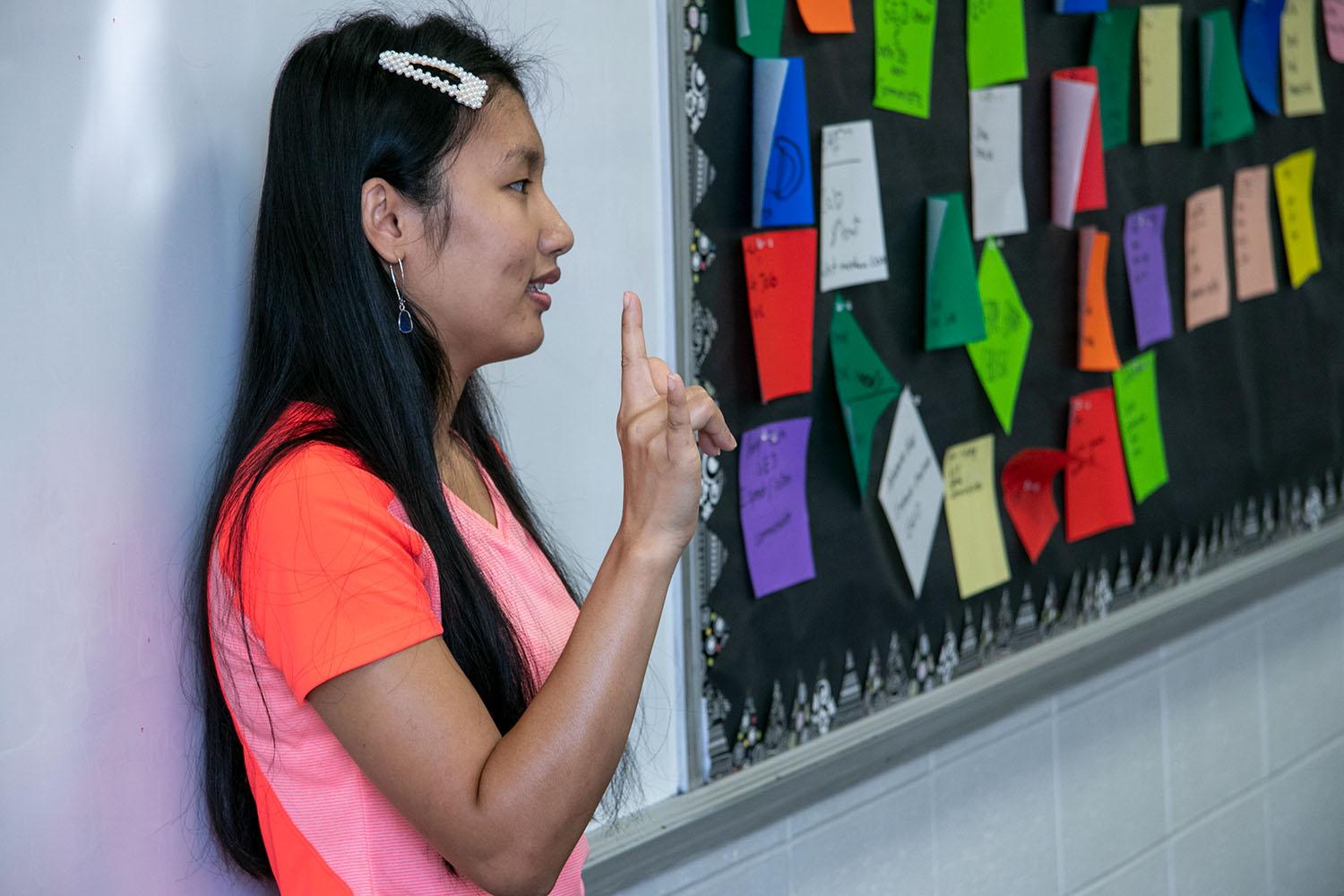 Aye Thaw, a Burmese student, demonstrates American Sign Language to the English as a Second Language class she is enrolled in at Southcentral Kentucky Community and Technical College. Thaw’s child is hearing impaired, so she has been learning ASL on top of learning English.

While there are differences between the groups of students every year, forming strong relationships is something that never changes.

“The collectiveness that exists in other countries is something you can see in the classroom,” Garrett said.

“They really value education and community, and they’re even a strong community in the classroom,” Garrett said. “I cannot stress how much they believe in giving back instead of taking from.”

Many of the students are in the United States to pursue higher education or for a certain career path.

“A lot of times we have students who are doctors, lawyers or engineers in their home countries who start at level one because sometimes people don’t accept their credentials,” Garrett said.

Felix is working toward his GED to become a policeman or work for the military. He said the ESL classes have helped him come closer to reaching these goals.

“This program has helped me with introducing myself,” Felix said. “I am now able to apply to a job and know more things about this country.”

The coordinators at Skills U “are trying to work more on the workforce than (they) have in the past,” Garrett said, by “collaborating with community partners and keeping up with what’s going with businesses.”

Garrett said she has experienced growth from her involvement with the ESL community.

“They have taught me so much that every day is not a work day,” Garrett said. “Coming to ESL has made me a better person. I wish I had known more about the communities, the people and the culture at a younger age. That’s something I want younger people to know.” 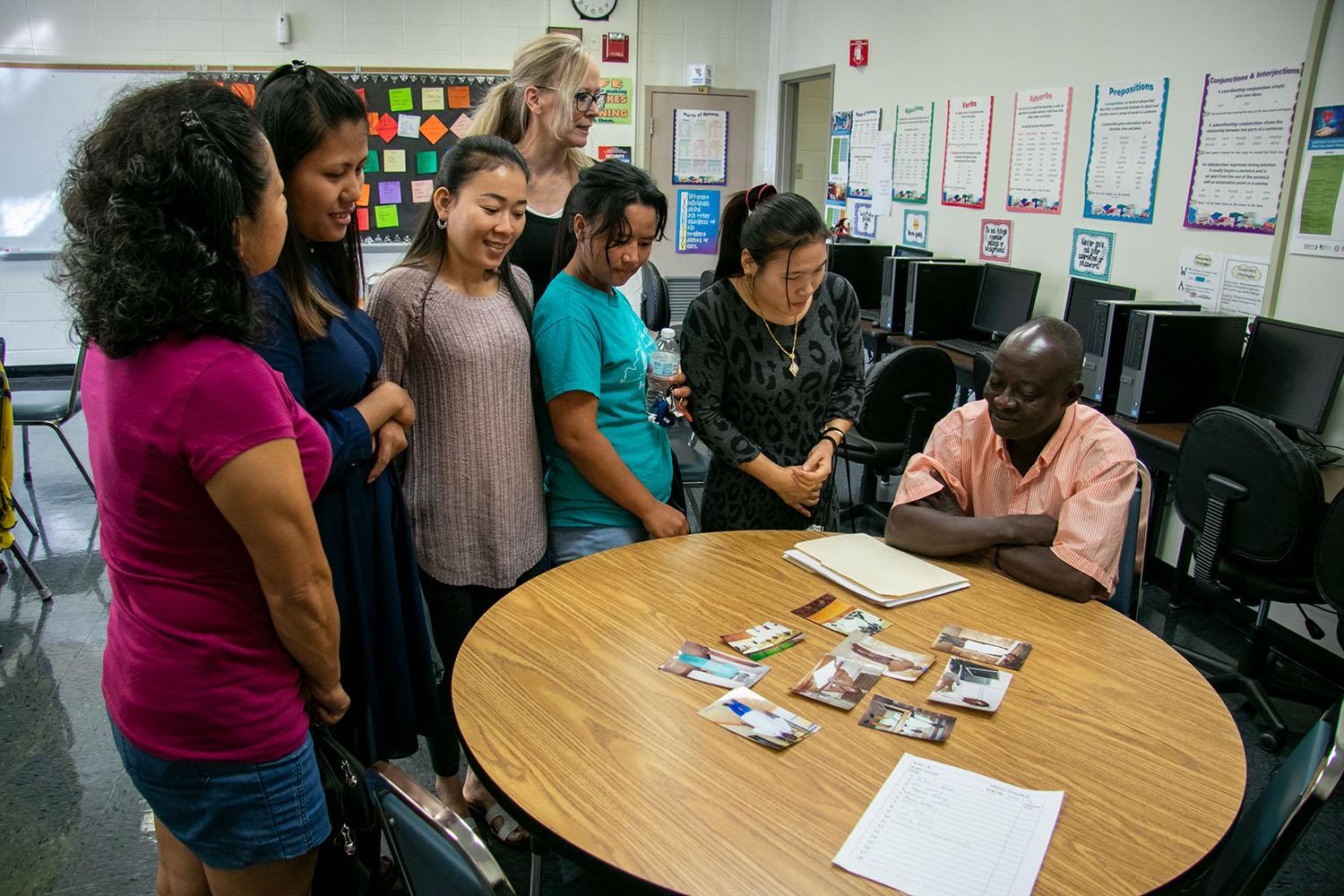 The class gathers around Makonga “Justin” Shouaojust as he shows them pictures of his youth. He was a doctor before coming to the United States but now works in a factory due to the language barrier.