The 2019 Special Olympics Kentucky State Softball Tournament and Skills Competition was a three-day event filled with softball games, skills competition and community. Teams traveled to Bowling Green from cities and counties all around Kentucky to compete. Friday, Sept. 13 kicked off the weekend with the skills competition portion. 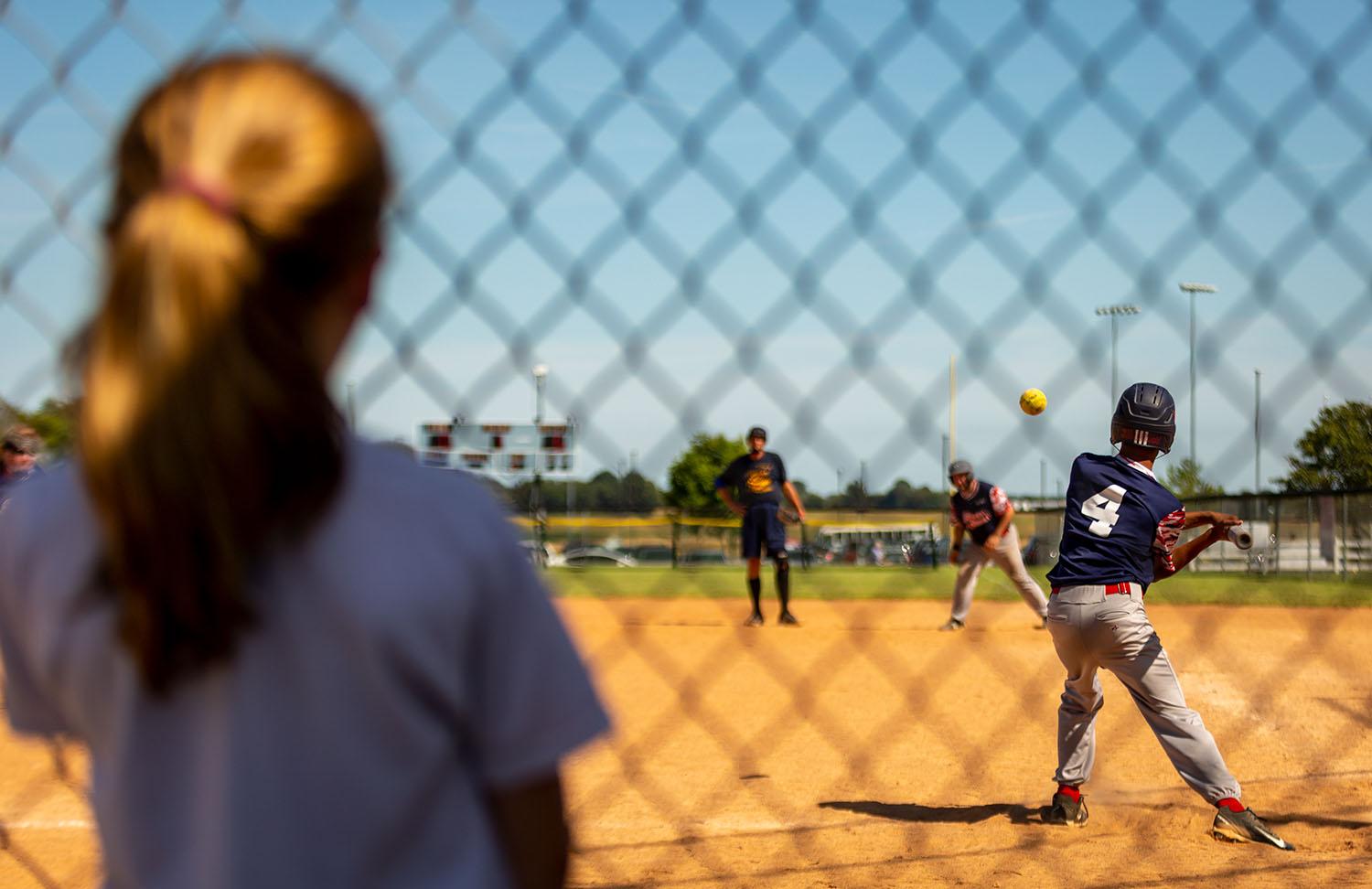 Kendall Pedigo of Smiths Grove watches Jairon Pace of the McCracken County Tigers strike in their game on Sept. 14. “We love coming out here every year to watch,” Cara Beth Pedigo, Kendall Peigo’s mother, said. “I don’t have any kids on the team. It’s just something I enjoy with my daughter.”

On Friday, Sept. 13, the hot evening air at Michael O. Buchanon Park smelled of dugouts full of every fried food imaginable, lumpy and weathered duffel bags, and heavily-used tan catching gloves. A crack roared through the ballpark as a bat made contact with a ball. Everything erupted in practiced motion as people began to shout and cheer. The park’s eight fields were trampled, pounded and slid upon by 39 teams competing in the 2019 Special Olympics Kentucky State Softball Tournament and Skills Competition.

“People with intellectual disabilities are just like you and I, and that fact has always been a passion of mine,” said Kelly Firquin, volunteer service manager.

The winners of the regional competitions, held throughout August, advanced to the state championship held by the Special Olympics Kentucky organization. All brackets were double elimination, meaning after one loss the team wasn’t fully out of the competition, until the final competition Sunday, Sept. 15 afternoon.

The three runners-up in the regional competition competed in Friday’s skills competition, where they were ranked by team average.

The blood-orange harvest moon was on the rise and the Bowling Green Special Olympics team stood together, all in strawberry-red jerseys with each player’s number displayed on the front and back.

As the team stretched in preparation for the batting portion of the competition, Tristian Graves, who plays third base, said his favorite part of the game was the adrenaline rush.

During the running portion of the competition, each player took their turn running bases. Bowling Green’s Sara Dicicc, 22, flew through the dust, grinning, looking neither at her teammates nor her coaches, but at the bases ahead. Dicicc is inspired by her coach, Levis.

“Cameron is like a dad to me,” Dicicc said.

Before each competition, Levis huddles the team up and gives simple instructions: “Have fun, keep cheering each other on and keep on dancing.”

He jokes, “If anybody stops dancing, they’ve gotta walk back home.” The team erupts in laughter.

After the Bowling Green team was awarded first place in the skills competition, they gathered and shouted the WKU fight song. 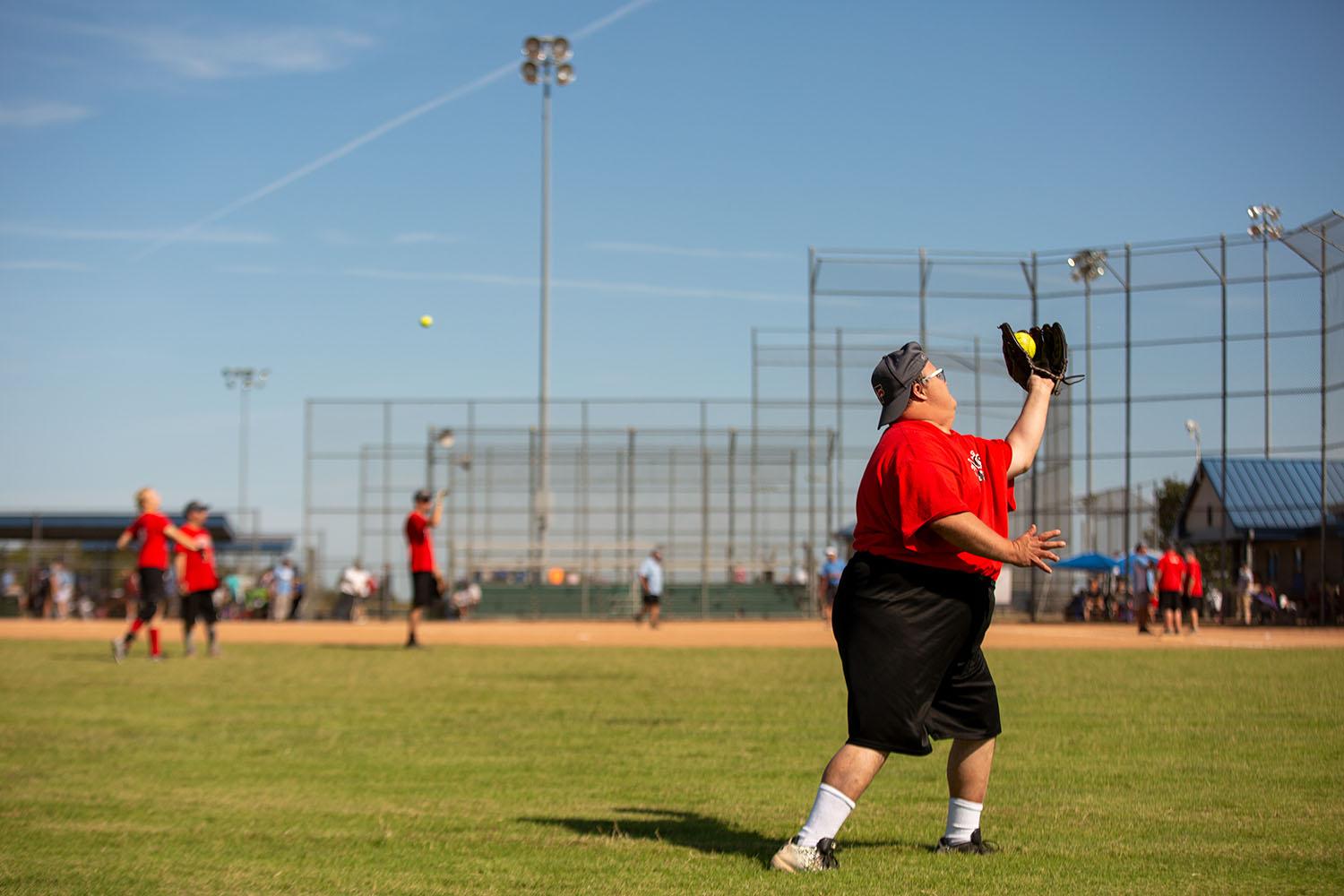 On day two, everyone had to squint through the smog of wet heat and cyclonic brick-dust as the bracket competition games began.

The McCracken County Tigers hunched close to each other, focused on their fellow Tigers on the field during the first game of the day. When the next inning started, the players ran to assume their defense positions on the field.

In another game, the neon jerseys of the Covington Hot Rods mimicked the yellow of the softball, which Joe Vessels slammed down the center in the second inning before he slid safely into first base on a close call against the Lexington Thunder. 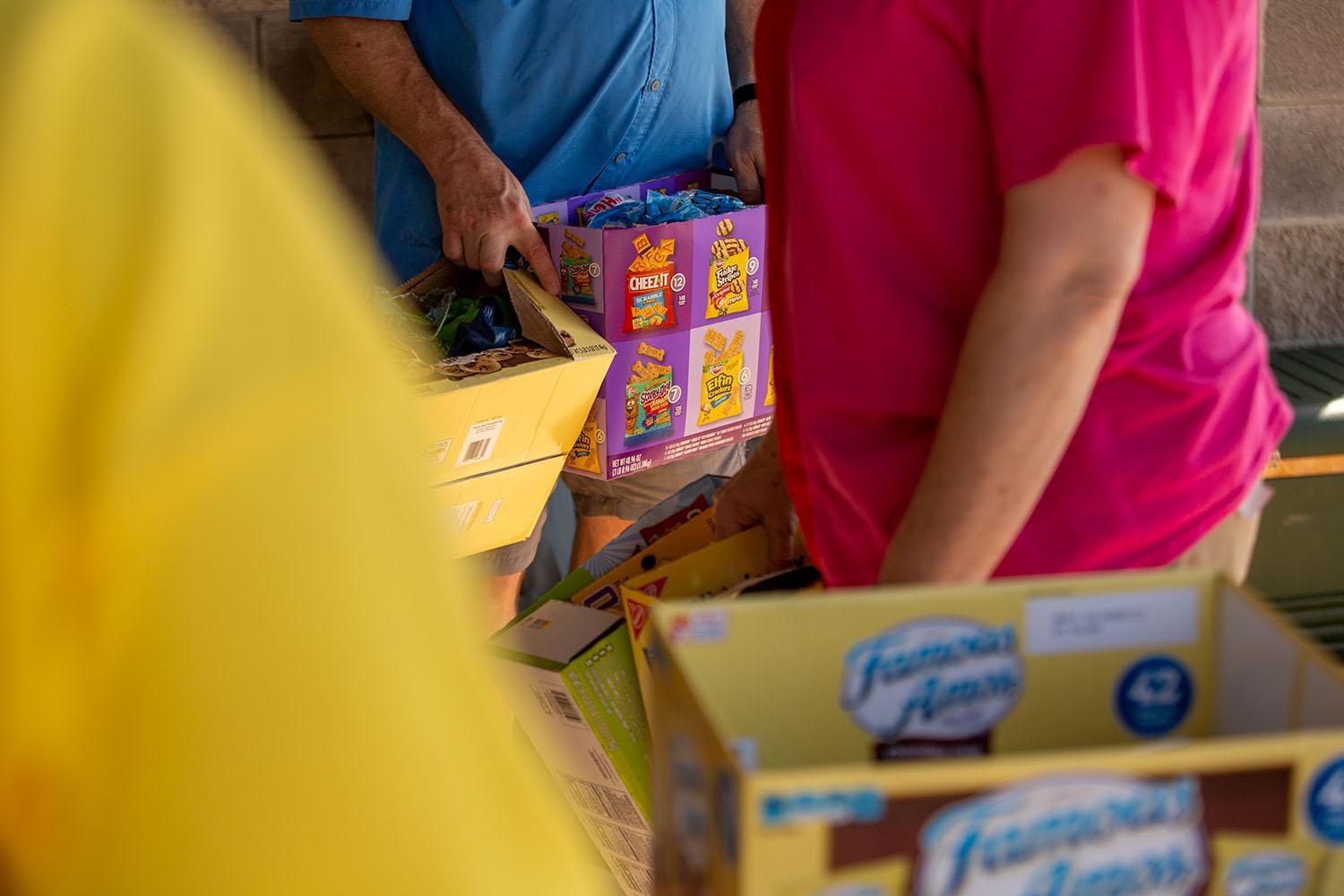 Jeremy Harris and Becky Ruby move empty snack boxes from concessions during the Special Olympics Softball and Skills Tournament on Sept. 14. “We donate part of our lunches every year for this event,” said Ruby, coach for the Warren County Youth Softball League.

Tournament volunteers stood in the shade of the concessions stand, sweating in the announcing box or handing out water bottles.

“I’m just a softball person,” said Becky Ruby, a Special Olympics softball volunteer of eight years who was in the announcing box. “I love the sport. It doesn’t matter who’s playing.”

The competitions dwindled down as the sun fell, and players returned to their hotels to freshen up for the Victory Dance, an event held at every state championship to celebrate the accomplishments of the day. 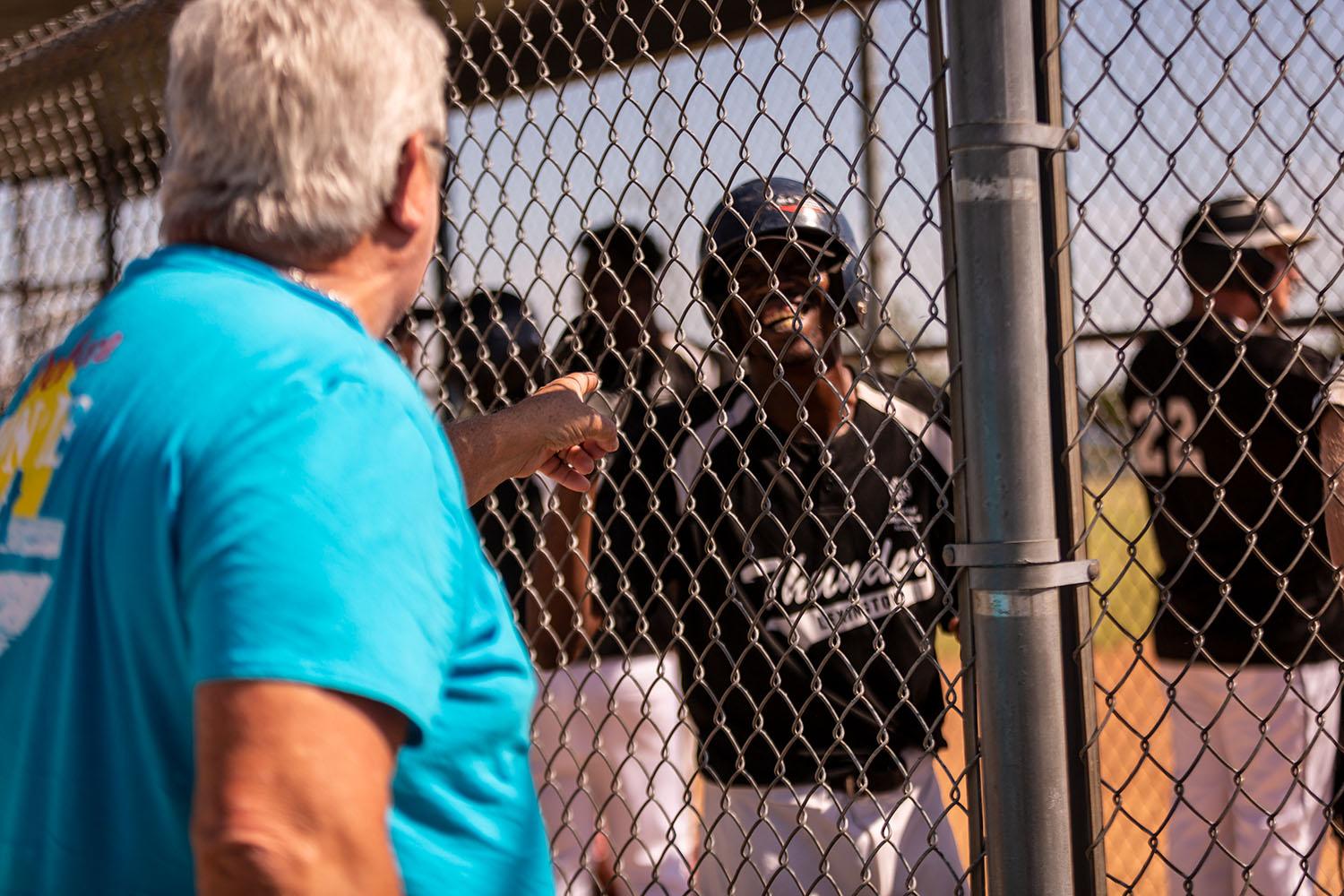 Steve Klein of Covington, Kentucky congratulates the opposing team on a previous play. “We’re friends with the team from Lexington, me and my wife,” said Klein, “We try to go to all their games when our son isn’t playing. There’s a great community with all of us.”

Northern Kentucky Thunder players Shawn and Leana Ross from Independence, who play left field and third base, respectively, waited in the dusk for the doors to open at Bowling Green Junior High on Sunday night. Leana was in an emerald-green gown, and Shawn was in black slacks and shirt. They’ve been married for three years.

The doors opened, and everyone filed onto the dance floor in the gym as the DJ for the night, Levis, started the music. The Ross couple joined each other in a slow dance.

Tommy Nickens, 20, from the Bowling Green Special Olympics team, was thrilled to get on the floor. He said he was fueled with pizza before he ran to the middle of the gym, wielding his signature superhero (The Flash) hat, and began to dance, eyes turned not on his observers but on the ceiling above.

Air-guitarists established themselves. Fellow square dancers merged to form large groups. The floor swelled and teemed with veteran Cotton-Eyed Joe line-kickers and Cha-Cha sliders. Dancers came up to Levis, and he greeted each by name as they requested their favorite songs.

In the cafeteria, surrounded by a small fort of Larry’s Pizza boxes, were volunteers Maddie Duncan and Michael Justice, who work for the Bowling Green Parks and Recreation Special Populations Division. They gave away cheese and pepperoni slices and poured paper cups of apple juice for parched dancers.

Justice graduated from WKU in 2018 with a bachelor’s degree in recreation and sport administration.

Justice said the players do more for volunteers than they do for the players.

“They are always so kind and happy,” he said. “It’s a great atmosphere.”

Amanda Day sat with her son, Killian, as he ate a lukewarm slice of cheese pizza. Day has three children with autism, Ayiana — who also goes by Ya Ya — Zane and Killian. Day said two of her children play softball for different Special Olympic teams because they’ve found their own niche in each.

“(People with special needs) look at the world differently than you and I look at the world, and that’s why I love them,” Day said. “My daughter, Ya Ya — she feeds the homeless every Monday. It started when she was in Girl Scouts, and now it’s her thing. Because she can look at the homeless and understand them. She can empathize with being misunderstood.”

Things were winding down in the gym as players started to file out around 9 p.m. 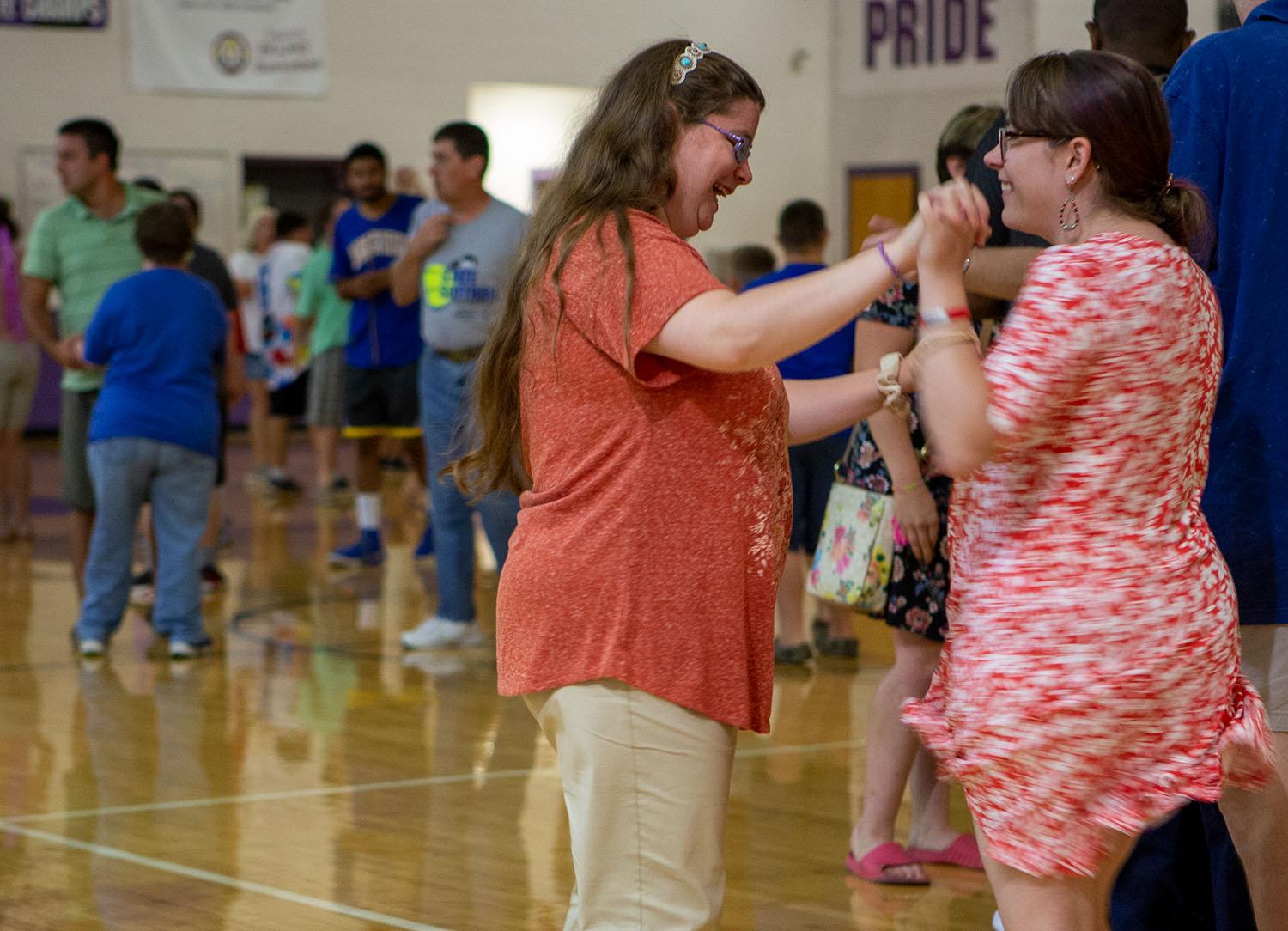 Athletes involved in the Special Olympics Softball and Skills Tournament participate in the annual Victory Dance on Sept. 14. “The dance is a great way for [the athletes] to get to socialize with one another in a different setting other than competition,” said Cameron Levis, Bowling Green Parks and Recreation Special Populations instructor, “a lot of these kids treat it almost like a prom.” 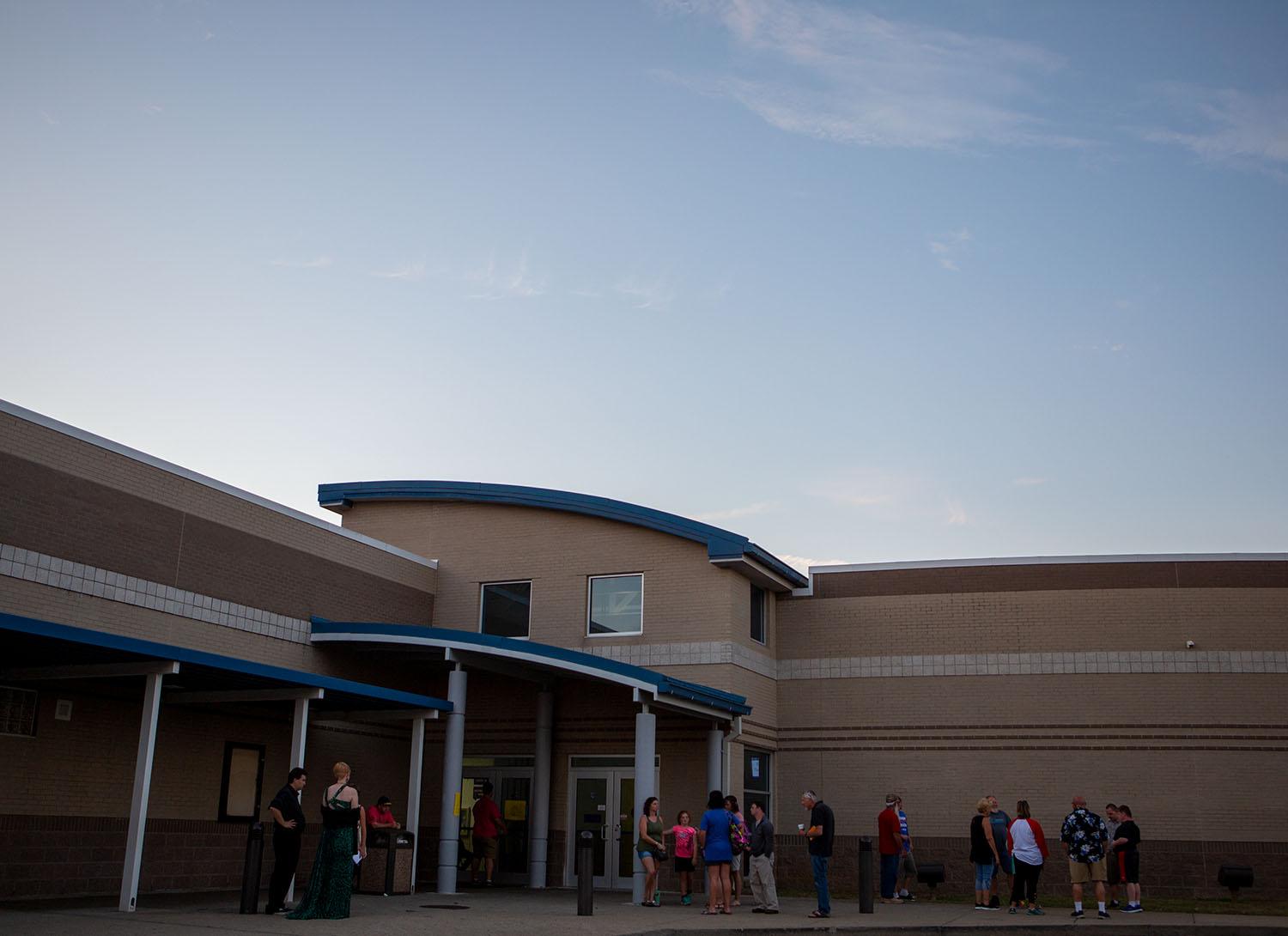 Athletes and their families wait outside of Bowling Green Junior High School before the Victory Dance at 7 p.m. on Sept. 14. The dance is an annual tradition held as an opportunity for athletes to socialize with their counterparts after a day of competition.