From the magazine: The butterfly effect

Growing up, my family was never very religious. We didn’t make a point to go to church or say a prayer before meals. I don’t even think we had a Bible in the house. If we did, it was in a box packed away or layered with dust in the top of my parents closet. My mom’s mom, who I called Nanny, saw church as an everyday activity. She loved church not just because she was intensely faithful, but because of the connections she had with the people in her hometown of Shelbyville.

She could tell you most people’s names, their kids’ names and their grandkids’ names. But she could go deeper and tell you where they lived and what was going on in their daily life like knowing when her cousin Wanda had a doctors appointment. This was especially true for the people she went to church with. To her, they were considered family.

Olive Branch United Methodist Church is interwoven into my family’s history. Nanny grew up going there with her family when she was young. Nanny’s brother, Chester, got married there in 2014, and then we all returned in 2018 to say our final goodbyes and “I love you’s” to my Nanny.

Following months of health issues, Nanny was diagnosed with stage four colon cancer on June 13, 2018 and on July 7, 2018 while at work I got the hard phone call from my dad. I heard his voice crack as he said he didn’t want to tell me over the phone but Nanny had passed away. After hearing this I went to the bathroom gasping for air, trying to hold in my tears. I left work early that day to make the 40-minute drive to Shelbyville to say my goodbye.

Soon after Nanny’s death, my mom began going to church regularly for the first time since she was 17.
Every Sunday, she gets up, puts on her nicest clothes and drives to the church where Nanny spent most of her days. She’s never asked my dad, sister or me to join her because she does it for herself. I think she goes to church because she finds a piece of Nanny there, and that makes her feel at home. At church, she is known as Marva’s daughter.

Every day since Nanny died, my mom gets up in the morning and she slides Nanny’s wedding ring onto her left index finger. I put on my necklace strung with Nanny’s engagement ring dangling from it. My sister puts on a necklace with Nanny’s original wedding ring on it. And we begin our days taking a little piece of her along with us both in Bowling Green and in Louisville. 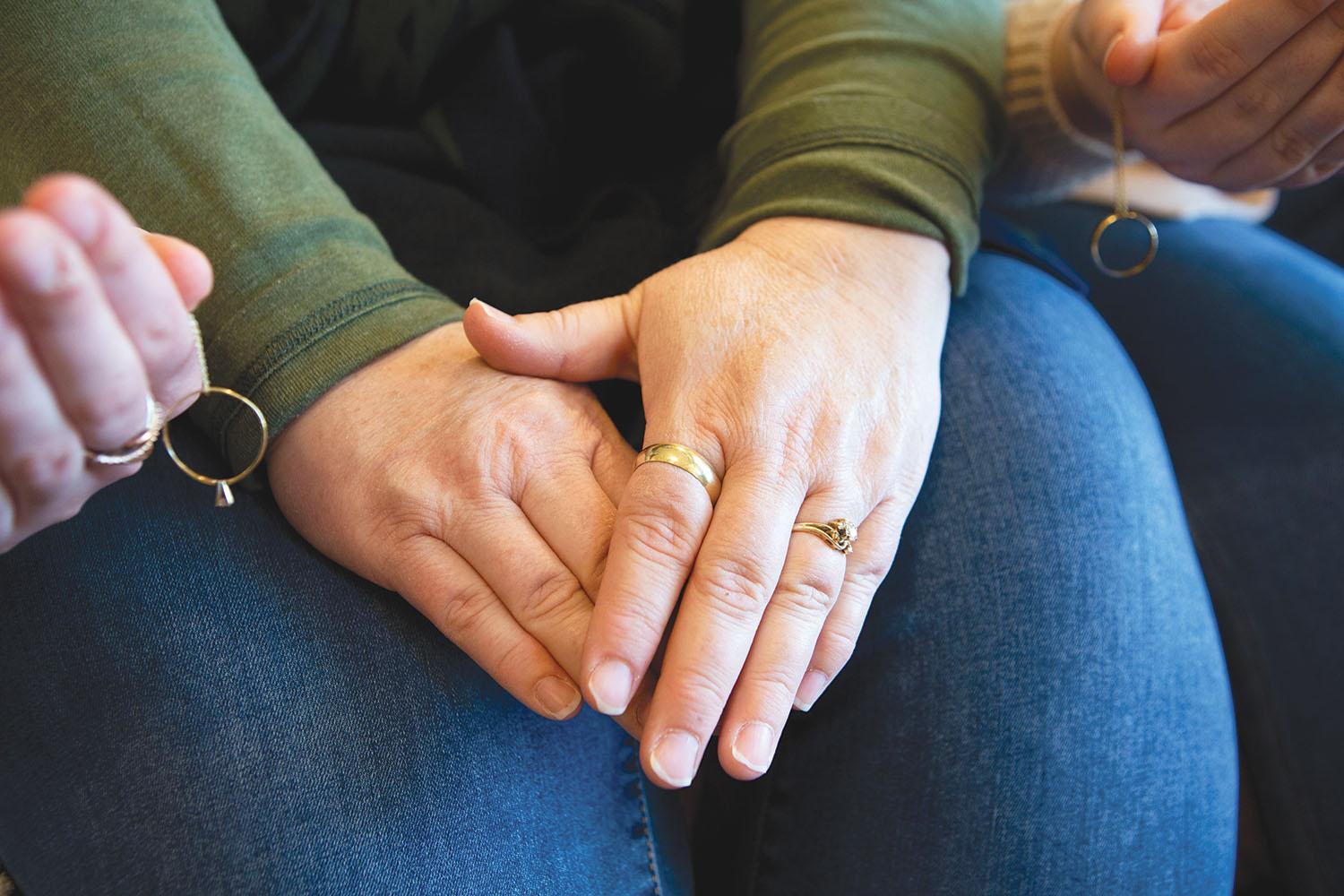 Kristina Francis (from left), her mother, Tammy Francis and her younger sister Allison Francis all wear pieces of jewelry in memory of Marva Dunaway, Tammy’s mother and the girls’ grandmother. Tammy has her mom’s wedding ring; Kristina has her nanny’s engagement ring and Allison has an older wedding ring that they each keep.

When Nanny was first diagnosed with cancer she took chemo pills for a week, which caused her
extreme fatigue.

My mom spurred the hard conversation with Nanny at her PET scan appointment about what she wanted to do if the treatment did not result in change. At first, Nanny said she did not want to hurt the people around her by stopping treatment. My mom reassured her the family loved her too much to see her in that kind of pain. After talking they decided if the results from the scan showed Nanny’s condition had not improved, they would end treatment.

Not long after their decision, my mom got a phone call on July 3 from Nanny’s doctor. Nanny’s liver had been consumed by the cancer and was not functioning properly because of a tumor.

Four days later, she passed away while lying in bed surrounded by her family and friends.

There is no doubt Nanny’s family was her whole world. She had four children, 11 grandchildren and 15 great-grandchildren. Her motherhood was such a big part of her identity that the word “mother” was stitched into the interior of her casket with elegant, light-pink thread. She was so proud to be called Mom, Grandma and Nanny that she wanted those identities to be with her for the rest of time.

There were lots of unfamiliar faces to me at Nanny’s visitation and funeral, and everyone had their own unique story about her. What stuck with me, though, was her friend Judy’s story.

For years, Judy and Nanny would ride to church together and sing songs at the top of their lungs on the way there. Judy said she knew when she picked up my Nanny, who she called “Miss Marva,” that she better have music ready because Nanny wanted to sing. Hearing this brought tears to my eyes, reminding me of the person Nanny was. She had a light in her that radiated through others in the smallest moments.

My family and I are still grieving. We’re trying to grasp the idea that she is no longer with us. Even though I got the privilege to spend 20 years with her, it still does not feel like enough. The day she passed, my sister realized Nanny would not get to see her graduate high school or see either of us graduate college. Trying to find happiness in life without her is something I think we all struggle with, but my mom especially. Even after selling Nanny’s house, my mom’s childhood home, things have not seemed to get much easier.

The thought never crossed my mind when I was younger and running though Nanny’s yard searching for Easter eggs, that one day, I would not be able to return. We began to clean out her house over the summer. We spent hours sifting through everything she accumulated in the 48 years of living there. I could tell it was hard on my mom. She had grown up there.

While cleaning out the house, my mom came across a personal testimony Nanny wrote about her for the church.

“So I call Tammy my miracle baby,” Nanny wrote, referring to my mom. “She was born at healthy 10
lb. baby.” 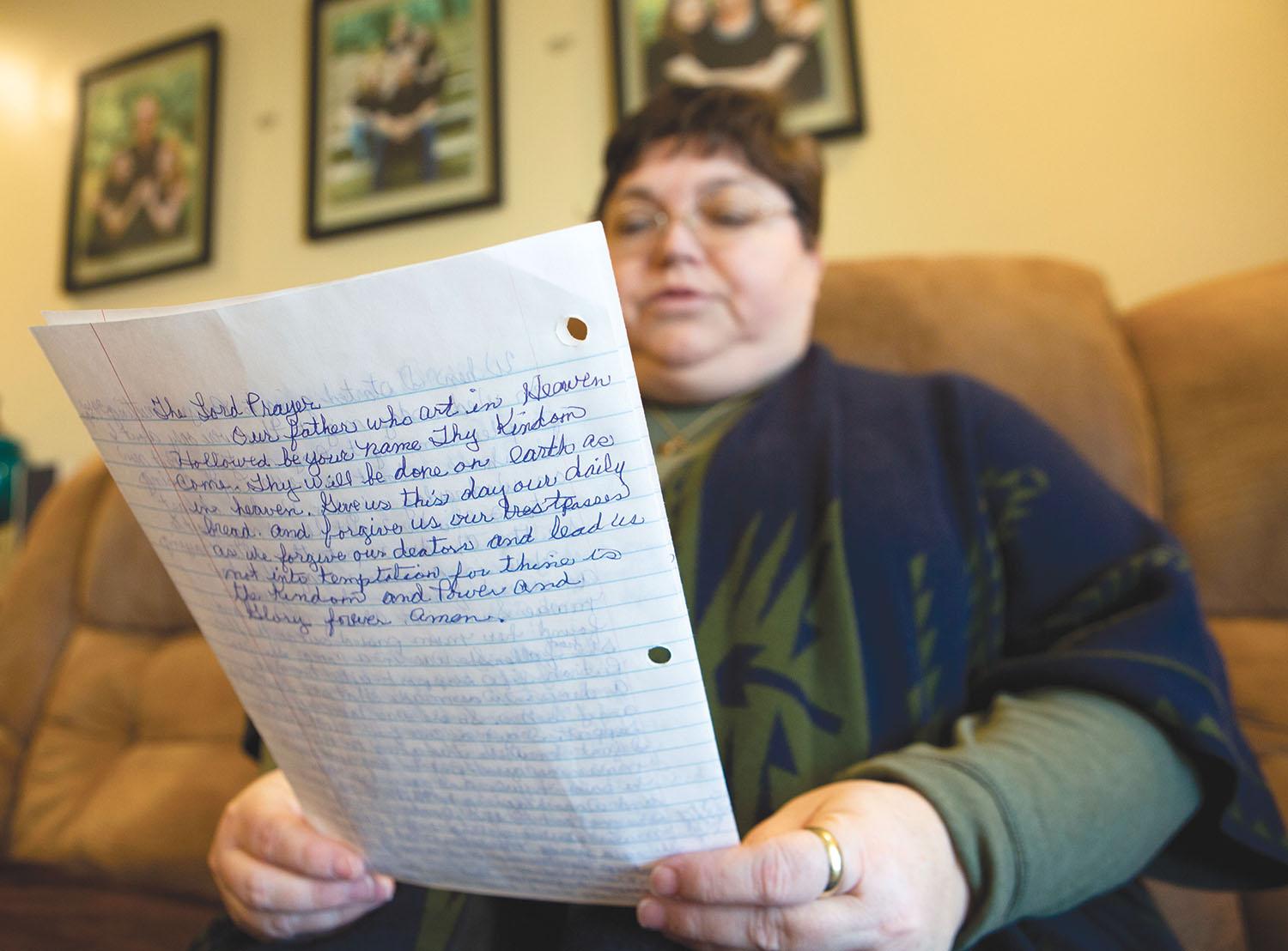 Tammy Francis reads the personal testimony her mom, Marva, wrote about her for the church and becomes overwhelmed with emotion. “I’m grateful to have been able to say goodbye, but she suffered,” Tammy said.

This was the first time my mom saw Nanny refer to her as a “miracle baby.” Sitting at Nanny’s dining table, my mom broke down in tears from being able to sense her mom’s voice one more time through this testimony.

My mom was there with Nanny through it all. She stayed almost every night at the hospital and then the nursing home for a little over a month only returning home to shower, grab lunch and return to her bedside each night.

Outside of the nursing home, there was a butterfly bush and every day white butterflies would play outside of Nanny’s window while my mom watched them. Nanny’s spirit, along with the single white butterfly my mom saw the day Nanny died, floated away into the universe that day.

I don’t know exactly what I believe about the afterlife, but Nanny was certain that she was going to be in heaven with God. At one point while she was lying in bed at the nursing home she said, “I’m ready to go home.”

No one said a word, but I think we all knew she did not mean she was returning to her house. She was going home to heaven.