The Science Scoop: Learning about the Kelly Autism Center

Last fall, I rushed into my neuroscience class, threw myself into a chair and breathlessly shuffled through my backpack to find my notebook. Looking up from my desk, I noticed my professor was introducing Michelle Elkins, director of WKU’s Kelly Autism Program, to talk about Autism through a neurological lens.

Since then, my interest in autism has grown. Recently, I reached out to Elkins and others at the Kelly Autism Program to learn more about the topic.

The science behind autism

Autism is an encompassing term for a range of conditions. It is a spectrum disorder, meaning that each case is different and there are not easily defined types. Every individual possesses unique challenges and strengths with social skills, repetitive behavior, communication and sensory processing.

Just as autism is difficult to define, there is not one gene responsible for the development of an autistic disorder. More than 100 genes or genetic mutations have been found to potentially increase the risk of an individual developing autism, according to Autism Speaks, an advocacy organization. Despite rumors, evidence suggests vaccines are not a cause of autism.

The care and support of individuals with autism are unique to each individual. At WKU, the Kelly Autism Program works to provide regular support for autistic students from elementary school through college.

Understanding the Kelly Autism Program’s approach to their students can help one understand the intricacies of autism.

The Kelly Autism Program started in 2002 when John and Linda Kelly saw how their daughter, an autistic student, lacked support and socialization outside of school and home. She needed something more.

And so the Kellys, alongside WKU, started the Kelly Autism Program to meet that need.

Originally, it was only an after school program for middle and high school students, but seeing a need for more, the Kelly Autism College Program was created in 2007 and was followed shortly by its elementary school program.

Ten years ago, the college program started with two students. Today, 57 are enrolled.

The college program focuses on five areas known as the circle of support: housing, study hours, mentorship, socials and counseling.

First, each student receives a private dorm room, which gives them a chance to decompress and rebuild their social skills each day.

Four days a week, students head to the Kelly Autism Program for three “study table hours,” where they can do homework in a quiet place. In this environment, they are supported by tutors and student workers, who help them study and develop organizational skills through tasks like checking their Blackboard websites. 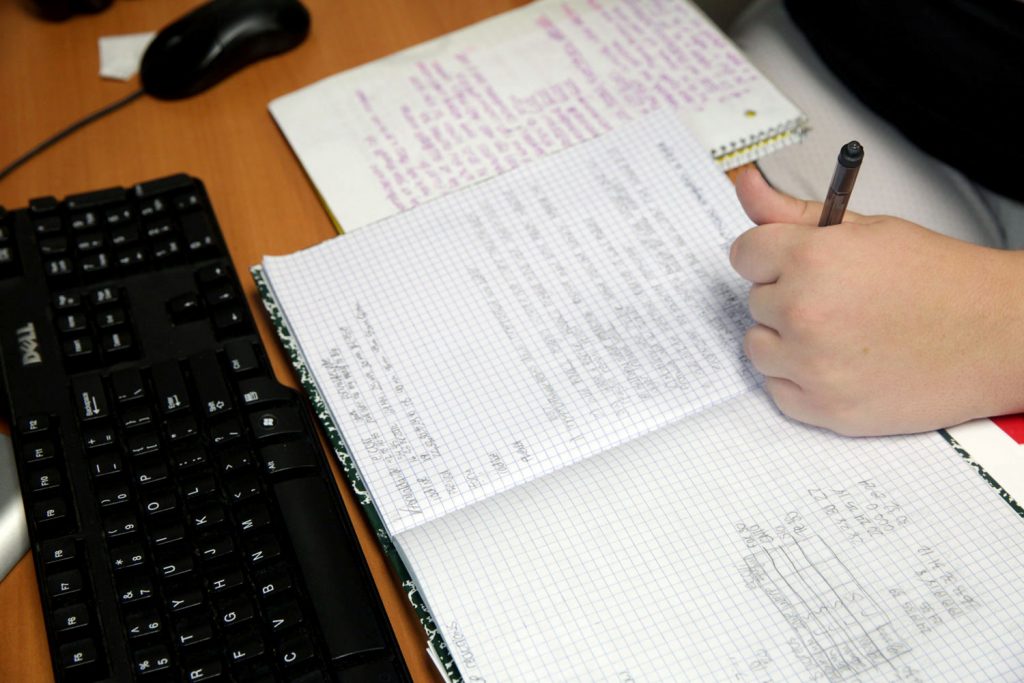 Students also receive a mentor. Each pair meets once a week for a meal or a social event, and these mentors help the Kelly Autism Program students get involved in clubs, integrate on campus and find peers to spend time with.

There’s also a full-time mental health counselor on staff at the Kelly Autism Program who leads individual and group counseling sessions, helping students talk about their experiences on campus.

But the support begins even before a student starts the college program. Because each student is unique, each incoming student completes an extensive profile and paperwork so the staff can understand what he or she needs in terms of care, tutoring and mentorship.

By the time students arrive on campus for their first week of classes, their profiles are complete, they’ve met the Kelly Autism Program advisers during the Topper Orientation Program, and they’ve registered for classes and set up study times.

The Kelly Autism Program staff even helps students move in and provides them with the opportunity to walk through their schedule on campus to find out where their classes are — as many times as they may need.

“Understand the anxiety of the students,” McMaine-Render said. “I’ve been in this twelve years, and I am still just reminded daily of just the anxiety these students face, and even if it’s not shown outwardly, a lot of these students are in inner turmoil with so much anxiety over different aspects that we take for granted every day.”

Once students are settled on campus, the program attempts to slowly push them out of their comfort zones.

“They want to socialize,” Elkins said. “They want friends. They want that companionship, but some of our students really don’t know how to get it, so our goal is to help them make that first friend, to understand how to react to certain situations.”

For students who haven’t had social and communication assistance in the past, this may be just as, if not more, important as the academic support the program provides.

The Kelly Autism Program and WKU

WKU has embraced the Kelly Autism Program and shares responsibility for its success.

McMaine-Render said she’s been impressed by professors who go the extra mile to work with students in the program.

“I have seen a large majority of the professors willing to take that time — that has blown me away,” McMaine-Render said. “The amount of the professors who have us come do presentations or reach out one-on-one — I have to say, as a whole, this campus has been very embracing, which is something that really surprised me.”

President Gary Ransdell has also visited the Kelly Autism Program every fall for its welcome back meeting the night before classes start.

Elkins praised the willingness of WKU’s faculty, staff, and students to learn more about autism and how to support students in the Kelly Autism Program. The program has even received requests to present information and training for several of WKU’s departments, organizations, classes and resident assistants.

But support from campus starts at an individual level.

One of the ways the Kelly Autism Program helps students socialize is by providing them with a student mentor. A lot of these mentors are the same ones who helped them move and may even be tutors for the program.

It takes some time, but students learn to be comfortable around their mentors. They meet up once a week, and their mentors often attend socials and other events — even when they are not necessarily scheduled to attend. Over time, friendships form.

Such was the case for assistant program manager Ryan McKenna and Louisville junior Clay Harville, a student in the Kelly Autism Program. 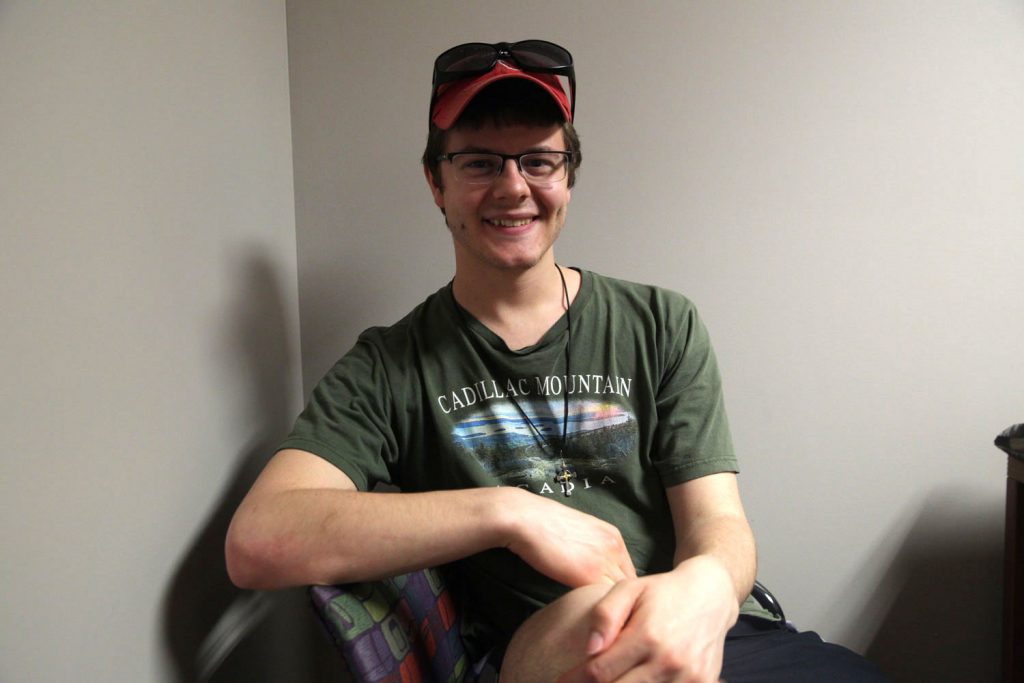 Harville was diagnosed with mild high-functioning autism at the age of four and later obsessive-compulsive disorder (OCD), anxiety and attention deficit hyperactivity disorder.

McKenna and Harville met three years ago at Clay’s student orientation, and McKenna became Clay’s mentor when he started working for the program as a student worker in 2014.

McKenna graduated from WKU with a degree in mathematics in 2016 but continued to work for the Kelly Autism Program as an assistant manager. 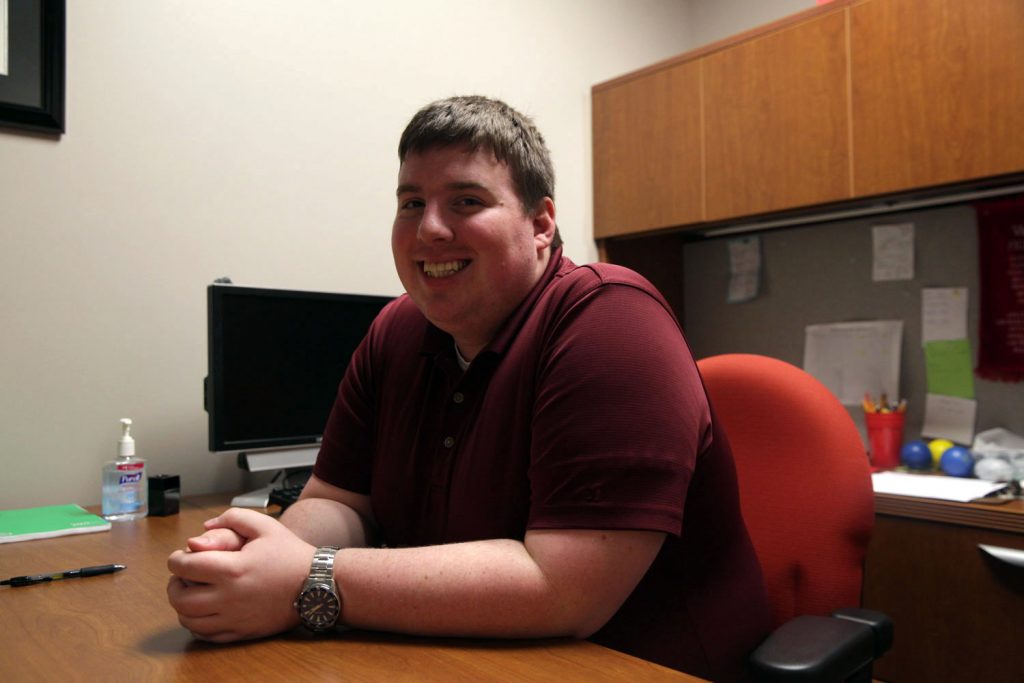 After years of working together, it’s obvious McKenna and Harville are comfortable around each other. They laughed and teased each other while discussing the first time they met and Harville’s transition to campus.

Harville said college was hard for him in the beginning. He said he stayed in his dorm room much of the time. Meeting another friend in the program helped, but it still took some time.

“I made a friend who was in KAP too and he was pretty outgoing,” Harville said. “Being with him just kind of helped me be just a little more out there, but I was not ready to face many big changes as far as it went being here at WKU. I just wanted to just stay in my dorm.”

Since then, Harville found more friends in the program and on campus. He’s gotten involved in clubs and organizations related to his interests, often at the encouragement and support of people from the Kelly Autism Program.

Harville has become a Kelly Autism Program mentor and elementary school primetime staffer, and he works with Best Buddies. All of this involvement reinforces both his social life and benefits his academic career, as Harville is studying special education and elementary education.

“If it weren’t for KAP I probably wouldn’t have made it this far right now,” Harville said.

Best Buddies, an organization that provides socialization for students with disabilities, was a group McKenna suggested Harville look into.

“It’s just all about hanging out, having fun, getting to know one another, making friends, and to me, that’s just really good,” Harville said. “I get really good benefit out of it.”

As with many developmental disorders, many misconceptions and false stereotypes exist around autism.

Harville said the idea that people with autism can’t feel anything is the biggest myth he’s encountered.

“I can honestly tell you I can understand why people would make up that myth, but I am here to tell you that is not true,” Harville said. “The way it works with many people with autism is that they really don’t know how to really express emotion, especially when it comes to times of say, tragedy or happiness or excitement. It’s not that they don’t want to express it. They just don’t really know exactly.”

McKenna said he sees the same thing as a counselor.

“A lot of people think that people with autism don’t want to have friends,” McKenna said. “They really do. It’s just very much a struggle for them connecting with people and learning how to.”

To befriend someone with autism, Harville suggested approaching the relationship slowly, with continual communication, patience and shared interests. Both McKenna and Harville also said avoiding sarcasm goes a long way.

“With all kids with autism, they don’t understand social norms a lot,” McKenna said. “A lot of the time, they have to learn social norms the hard way and a lot of it is learning through experiences.”

Students in the Kelly Autism Program spend a lot of time working on facial cues and social norms, things that are typically taken for granted in a conversation. Autistic individuals can become quite experienced in detecting these, but it will not come naturally, so it’s still a challenge.

Moving on from the Kelly Autism Program after college, students have been successful, but McKenna said the definition of success is as different as each individual.

For some students, success could be working a part-time job, something that might not have seemed possible for them before. For others, it may be working a full-time job and living on their own.

“We see a lot of our students as very successful because they’re happy and they’re doing some really great things,” Elkins said.

Elkins said other universities have sought advice from the Kelly Autism Program on how to set up similar programs. This, plus positive feedback from students and their families, shows her that they are on the right track.

From the outside looking in, it’s clear that the program’s focus is on their students.

“They are not just students to us,” Elkins said. “They’re our family. They’re our kids.”

Like a family, the Kelly Autism Program staff cheers on their students as they seek their own happiness and education.

“These students deserve to be in college,” McMaine-Render said. “They have the academic capabilities. They just need some extra support.”