Warm Florida air carried the smell of rain at the John F. Kennedy Space Center on Sunday, Feb. 19. The sound of camera shutters surrounded me as I stood in a roped-off grassy patch three miles from the CRS-10 Falcon 9 SpaceX rocket and Dragon spacecraft.

Sixty seconds away from launch, multimedia journalists and social media gurus kept busy, adjusting their equipment for a perfect shot of Launchpad 39A. Nervous behavior ruffled through the crowd. Everyone was waiting to see if the rocket would launch despite the day’s bad weather.

The countdown clock hit one second. There was a collective deep breath and a moment of waiting before mouths dropped as the rocket ignited and lifted off the ground.

In this moment, I got a picture of what NASA was and still is today — a mysterious organization capable of making press pass-clad journalists lose their composure as they cheer, scream and cry in complete amazement.

I was one of a large group invited to attend a social media gathering and cover a NASA and SpaceX rocket launch. We were given social media press passes and three days to spend behind the scenes at NASA’s Kennedy Space Center.

After arriving at a small building just outside the Kennedy Space Center, two days before the CRS-10 SpaceX Falcon 9 cargo resupply rocket would fly into space, I quickly realized that I knew very little about NASA. Scanning my brain, it seemed that all I knew about NASA was that it competed with Russia during the Cold War, had a prominent shuttle program shut down by President Obama and occasionally shot robots into space.

Realizing this, I went into a silent state of panic as I checked in to receive my badge. I desperately eavesdropped on the conversations of other NASA social media visitors to gauge how utterly uneducated I was, and I was happy to hear, excluding a few exceptions, it seemed few of us had a clear picture of what NASA is today.

That would soon change. Over the next two days, our group would take tours, sit in on press conferences and watch a rocket launch.

Still, at that moment, I felt anxious as I boarded a bus that would take us on to NASA’s Kennedy Space Center, and I prayed I wasn’t about to embarrass myself in front of some of today’s brightest minds.

Driving onto the spaceport, dozens of cars with NASA bumper stickers zoomed past the bus. Watching them from the window, I started to get an idea of the size of NASA’s most famous center.

Covering about 170,000 acres of Merritt Island, Florida, the Kennedy Space Center was the project and launch site for NASA’s Apollo, Skylab and Space Shuttle programs. The space center has been at the center of many historic moments in American history, including all the moon launches and the Space Shuttle Challenger and Columbia disasters. 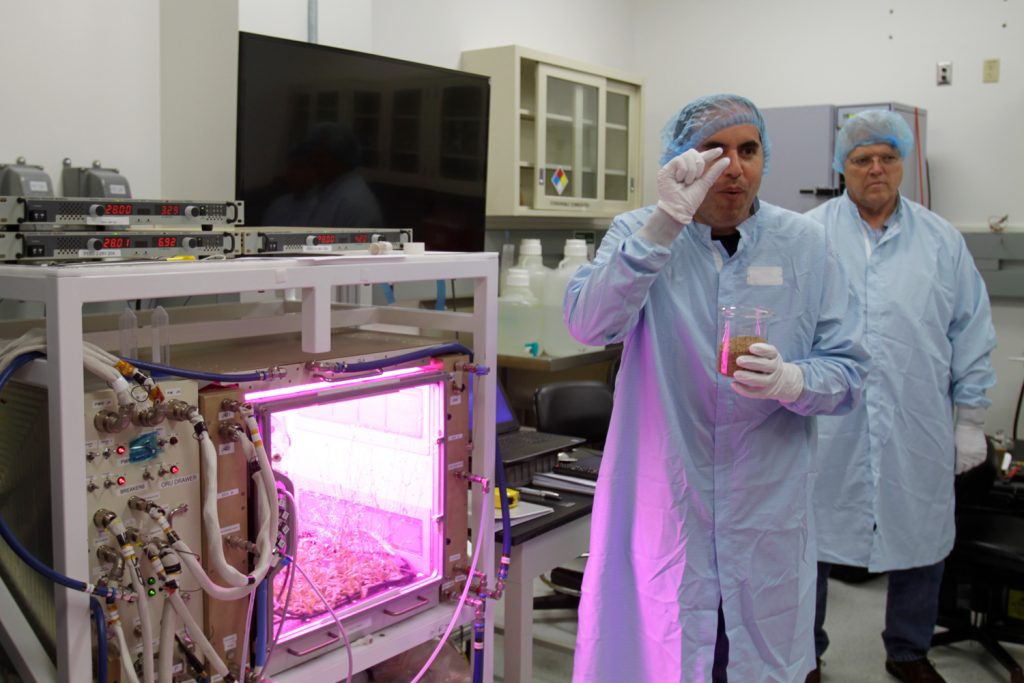 Two scientists explain the Advanced Plant Habitat device and its applications for life in space to a group of NASA social media visitors. Attached to the APH is a Plant Habitat Avionics Real-Time Manager in EXPRESS Rack (PHARMER), which can allow for information to be sent back to Kennedy Space Center.

While at the center, I couldn’t help but feel the excitement of the site’s past accomplishments but also the eeriness of its failures. These conflicting feelings seemed to characterize the nature of space travel and the severe consequences that await a mistake in NASA’s work.Studying the Kennedy Space Center employees became a small obsession of mine while at the center. Passing them in a hallway or listening to them explain their work, I realized I was searching for some identifier that would distinguish them from the average person. It quickly became obvious that I wasn’t going to see anything different. They look like everyone else and go to work like everyone else — only they work to launch rockets into space. 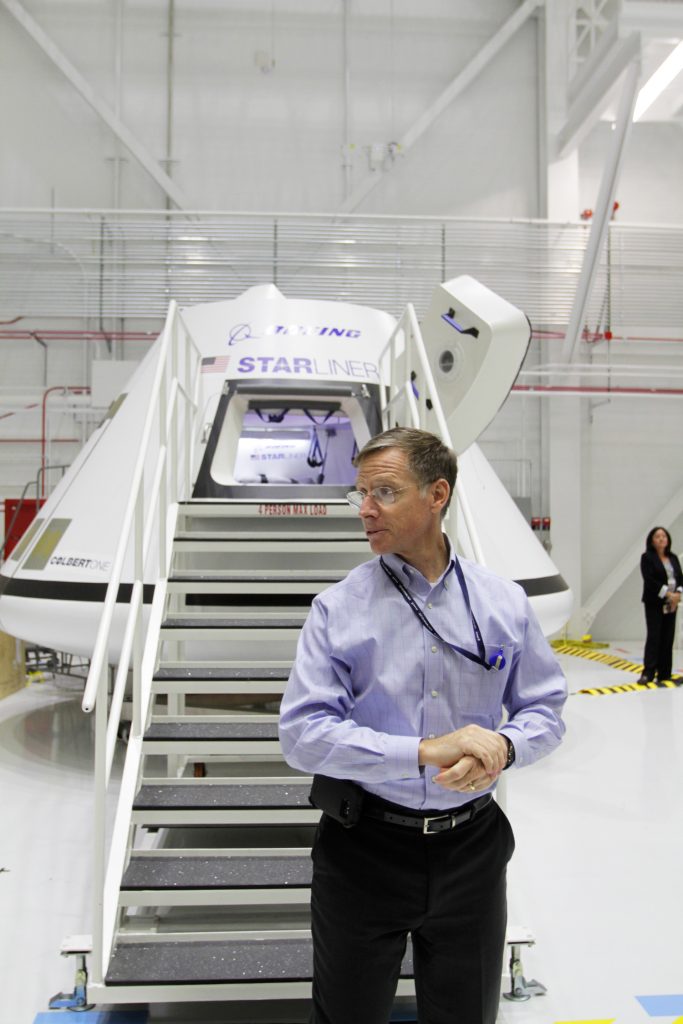 Chris Ferguson, director of crew and mission operations (CST-100) and former astronaut, gives a tour of The Boeing Company facility at Kennedy Space Center. Chris Ferguson described space travel as a “marathon not a sprint” and said space exploration is generational, with the next generation constantly taking up the former’s torch.

The launch of the SpaceX CRS-10 Falcon 9 rocket and Dragon spacecraft marked an important moment for NASA. It was their first commercial space launch from the historic Launchpad 39A, which served as the launch site for all the Apollo missions to the moon.

In 2014, SpaceX, a prominent NASA partner, signed a 20-year lease with NASA to use the launch pad. The launch of CRS-10 marked the first commercial launch from that pad.

SpaceX was founded by Elon Musk in 2002 to become a commercial space travel program. As a private company, SpaceX has had a range of clients, from government organizations to private individuals.

Commercial space travel may seem like a strange idea, but SpaceX has become a vital player in taking steps toward furthering human travel into space and has been working with NASA to fly several resupply missions to the International Space Station.

On Feb. 27, SpaceX announced that the organization accepted deposits from two private individuals to be flown around the moon in late 2018.

The future of SpaceX

Parking in a grassy field in front of Launch Pad 39A, a Kennedy Space Center bus let NASA’s social media visitors file out for a press conference lead by Gwynne Shotwell, president and chief operating officer of SpaceX. Shotwell spoke about the next day’s launch and the future of SpaceX.

“We’ve not been shy about saying that really the reason why SpaceX was founded — Elon founded this company — was to build space transportation systems that could ultimately take people to other planets,” Shotwell said to the crowd. “We’ve got our sight on Mars. For now, frankly, I think destinations outside the solar system are more exciting than Mars. But we’ve got Mars, so we’ll try to get to Mars.”

Launch Pad 39A had been sitting in disrepair, but during NASA’s partnership with SpaceX, it has been restored, updated and leased.

Shotwell still remembers watching the first lunar landing on a black and white TV screen with her dad. Since then, she’s been a fan of space travel, working in the business for 30 years.

However, she said this launch held special significance.

“This is probably the most exciting launch for me actually since I’ve been at SpaceX — both because it’s with NASA, who’s been such an extraordinary partner for us in our journey here and because of where we’re launching from tomorrow,” Shotwell said, referring to Launch Pad 39A.

Establishing a strong partnership between SpaceX and NASA didn’t happen overnight. It required an extensive NASA Ground Systems Development and Operations program to make the Kennedy Space Center capable of becoming a multi-user spaceport, accommodating both government and commercial partners.

The development of the Kennedy Space Center’s ability to serve its partners has been an effort to decrease the cost of space travel for long-term financial sustainability.

The GSDO is a clear indicator that NASA and its partners like SpaceX conduct their business with the future constantly in mind. 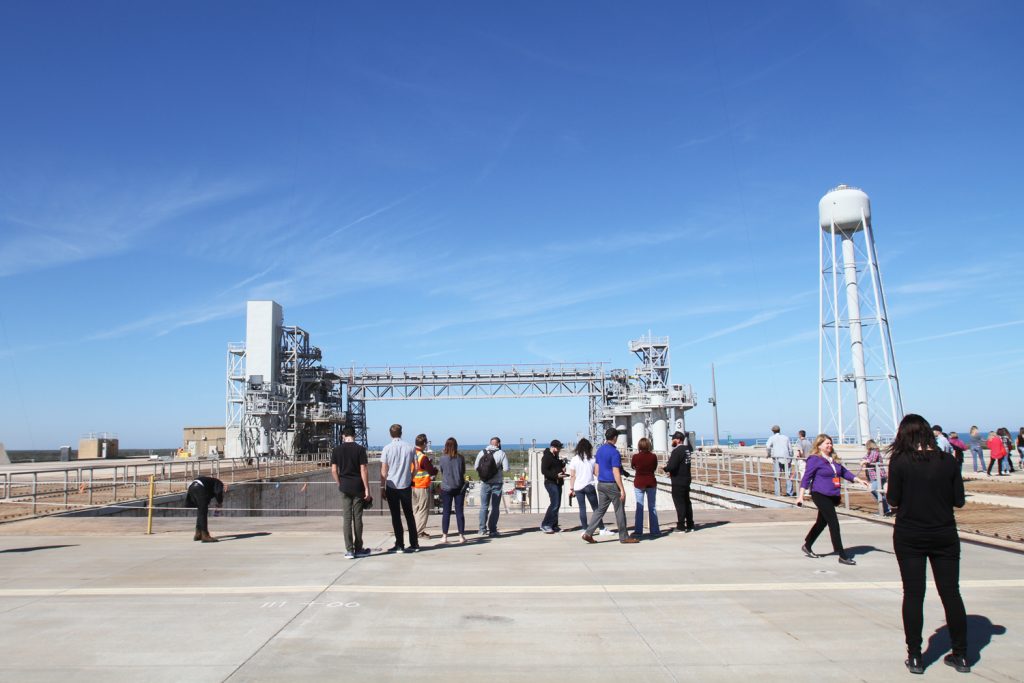 NASA’s social media visitors stretch their legs on Launch Pad 39B. The launch site will likely be used for NASA’s upcoming missions to Mars.

Heading to NASA, I was expecting to find a small facility that had pretty much closed the books on crew space travel. But in fact, NASA and its partners are laying the foundation for another generation of exploration.

So where’s the destination? Deep space. Despite sounding like science fiction, planet colonization is a serious goal of NASA and its partners, and it starts with Mars.

NASA studies of Mars have been well underway with its Curiosity rover and its Mars Atmosphere and Volatile Evolution (MAVEN) spacecraft. In the next year, NASA will launch the InSight lander, which will drill and investigate the planet’s interior.

NASA is also currently developing one of its strongest rockets yet, the Space Launch System rocket, which will potentially allow an Orion spacecraft to land on Mars. There are even NASA-employed biologists at the Kennedy Space Center conducting studies of plant life and growth on the International Space Station in an attempt to understand how to sustain life to and on Mars.

Even with its most recent launch of the CRS-10 SpaceX Falcon 9 cargo resupply rocket, Kennedy Space Center and SpaceX is making the journey to Mars more attainable by providing researchers the opportunity to have their experiments conducted in space aboard the International Space Station.

Even past Mars, NASA has been searching for solar systems far outside our current reach. On Feb. 22, NASA officials announced the discovery of a single system of nine planets, three of which could sustain life, orbiting a star. These were found using several telescopes around the world and the Spitzer Space Telescope.

SpaceX was created for the specific reason of ferrying people back and forth between planets. SpaceX has been working hard to not only improve launch techniques but also landing techniques so that the majority of a spacecraft and rocket materials can be recovered and reused.

With every launch, SpaceX is getting closer to creating a fully reusable space vehicle that would make interplanetary travel even more attainable. 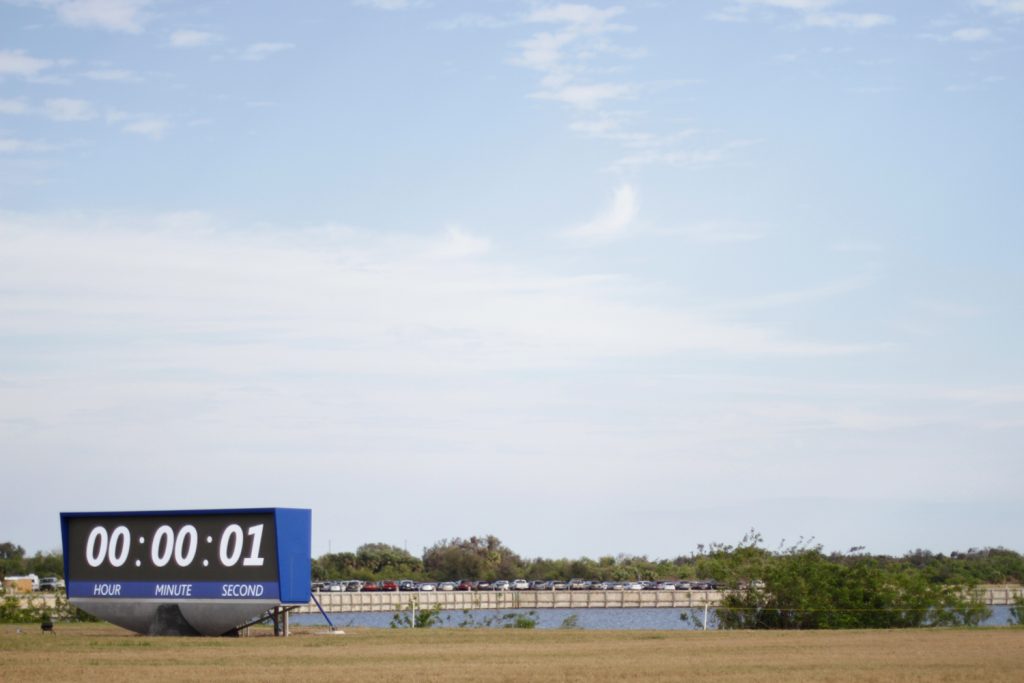 The countdown clock at Kennedy Space Center stands frozen at one second after SpaceX scrubbed the first launch attempt for CRS-10 Falcon 9 rocket. After scrubbing a launch, SpaceX can try to launch again within a 24-hour window. If scrubbed twice, the wait extends to 48 hours.

The complexity of work that NASA’s people are tackling is extremely high. Even after three days at the center, it was still difficult to comprehend what it all means.

On my last day at the Kennedy Space Center, I stood in a small crowd of strangers with cameras and cellphones and watched a rocket carrying over five tons of cargo fly into space.

After the CRS-10 SpaceX rocket disappeared into the sky, I noticed the person standing next to me had tears rolling down her face. I laughed inside, and I realized that even with all its changes, NASA is still capable of surprising us.

People are still intrigued about the Kennedy Space Center, and NASA still helps fire rockets to space. Space exploration isn’t over. In fact, it has barely begun.