From the Magazine: The trash cycle

Every day, WKU’s thousands of teachers, students and staff add to the hundreds of trash bins scattered around campus. This amounts to 3.5 million pounds of landfill waste each year, according to WKU’s Recycling and Surplus Department. This is equivalent to the weight of 1,229 standard model 2018 Honda Civics — the weight of enough cars to fill Parking Structure 3 almost twice. This is the story of where all that trash goes once it leaves our campus.

Step 1: Trash is thrown away

There are small trash bins all over campus, both indoors and outdoors. A grounds department employee rides around campus on a utility vehicle emptying the estimated 140 trash bins located on WKU’s main campus, according to WKU Facilities Management’s waste disposal locations map. The collected trash is then brought to larger dumpsters.

“[It] takes all day, every day just to empty those,” Elizabeth Gafford, WKU coordinator of Resource Conservation, said. 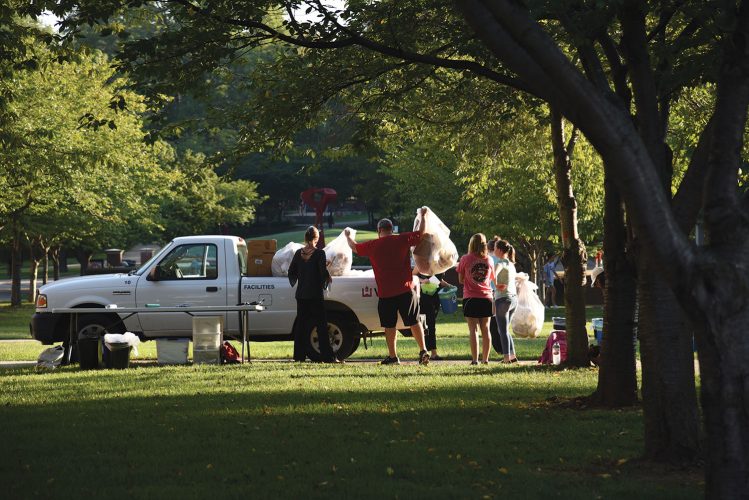 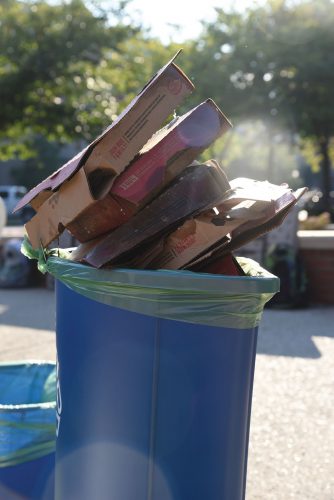 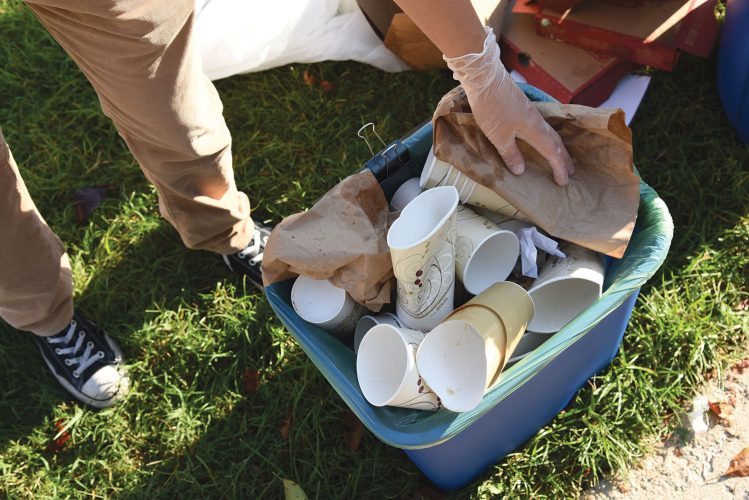 Students from an Environmental Science class sort out the paper recycling from Garrett Conference Center’s dumpsters. (Photo by Sam Mallon) 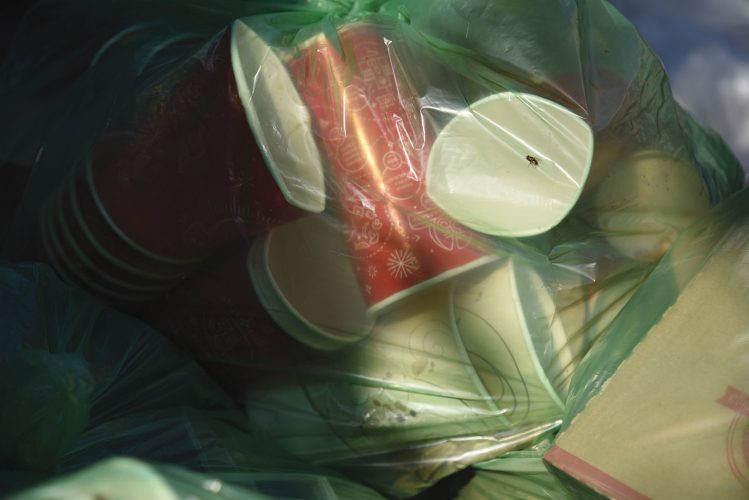 Step 2: Trash is picked up

Scott Waste Services comes to pick up trash in the dumpsters all over campus.

At 5:45 a.m., distant red and white trash truck lights signal the start of the WKU portion of the route for Kevin Leonard, a Scott Waste Services trash truck driver.

Leonard said there are an estimated 40 dumpsters all over campus. It usually takes him two to three hours to complete the part of his route that includes WKU’s campus every Monday, Wednesday and Friday.

Leonard drives a front-loading trash truck with arms that extend to pick up the dumpster and flip the trash into the back of the truck.

“It can be a nightmare once classes start,” Leonard said.

Leonard picks up around 80 tons of trash every shift. The truck weighs each dumpster in the process, since Scott Waste Services charges WKU six cents for every pound of trash that is picked up, Gafford said. 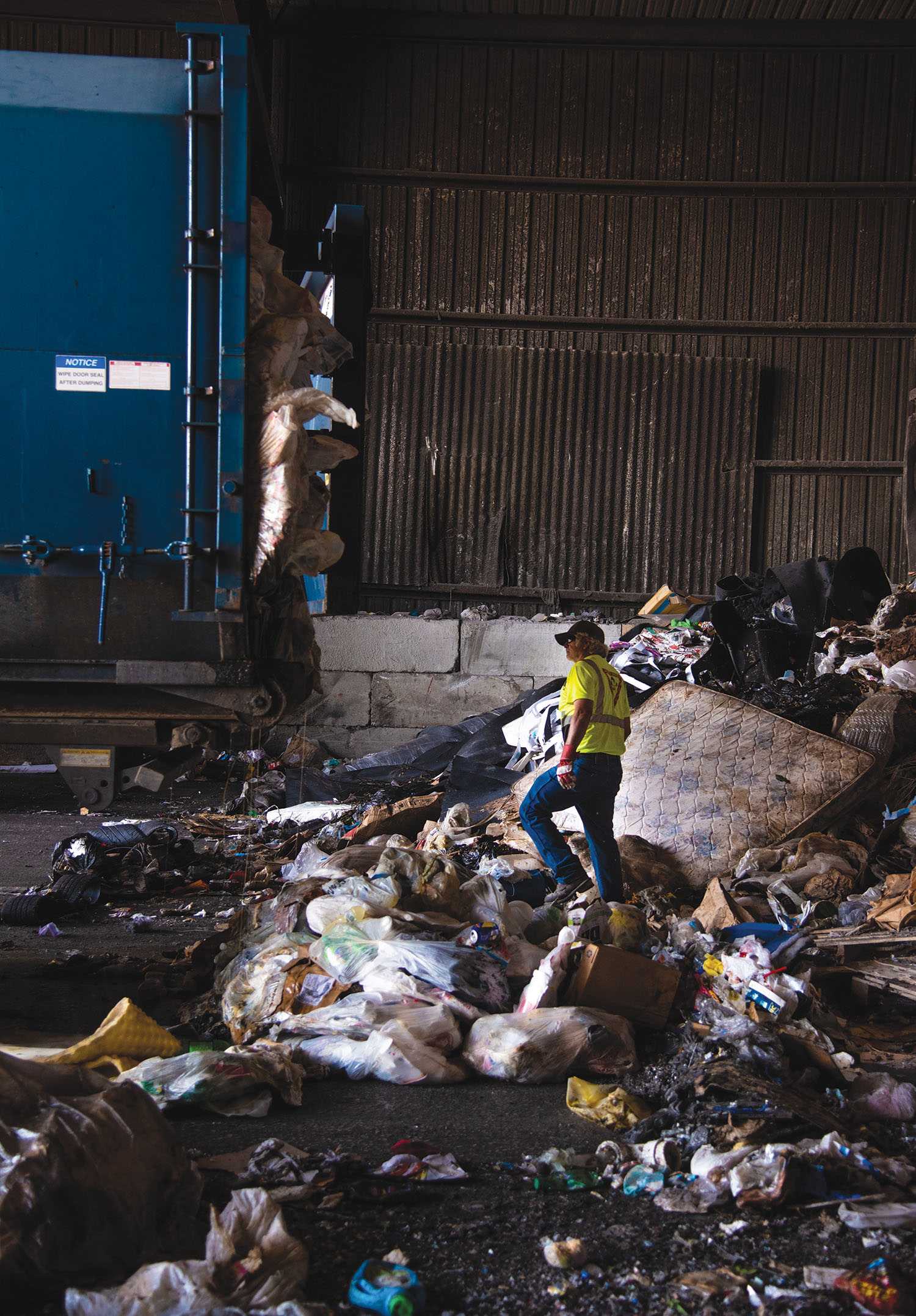 A garbage truck unloads at APEX Transfer Station in Auburn. The transfer station collects and consolidates trash from surrounding communities before it is brought to its proper disposal site. (Photo by Sam Mallon)

Step 3: Trash is taken to the transfer station

The trash is taken by truck drivers like Leonard to the APEX Transfer Station in Auburn.

Ty Bowman, the operations manager for Scott Waste Services, described the transfer station as “trash in, trash out.”

The transfer station is where trash is dropped off by garbage trucks so that drivers don’t have to travel all the way to the Hopkins County Regional Landfill, which is one hour and 19 minutes away from the transfer station.

There are places that skip the transfer station step because they are closer to the landfill.

“Since ours is further away, this makes more sense,” Bowman said.

Bulldozers scoop piles of trash onto long haul trucks and pack the trash down, ensuring that as much garbage as possible is loaded onto each truck.

Step 4: Trash is taken to the landfill

The trash compartments from the trucks are tipped back nearly perpendicular to the ground to pour the trash into the landfill, where special bulldozers then plow through to crush the piles into hilly slopes.

Ricker said the trash “should be here for life.”

At the end of each day, the trash piles are covered six inches high in soil. A majority of the landfill does not have exposed trash but rather, large grassy hills. From a distance, the piles don’t emit a stench, but up close, the landfill smells like rotten eggs.

“From an environmental standpoint, they’re a necessity,” Bowman said. “When you look at them, they’re trying to do everything they can do to protect the environment.” 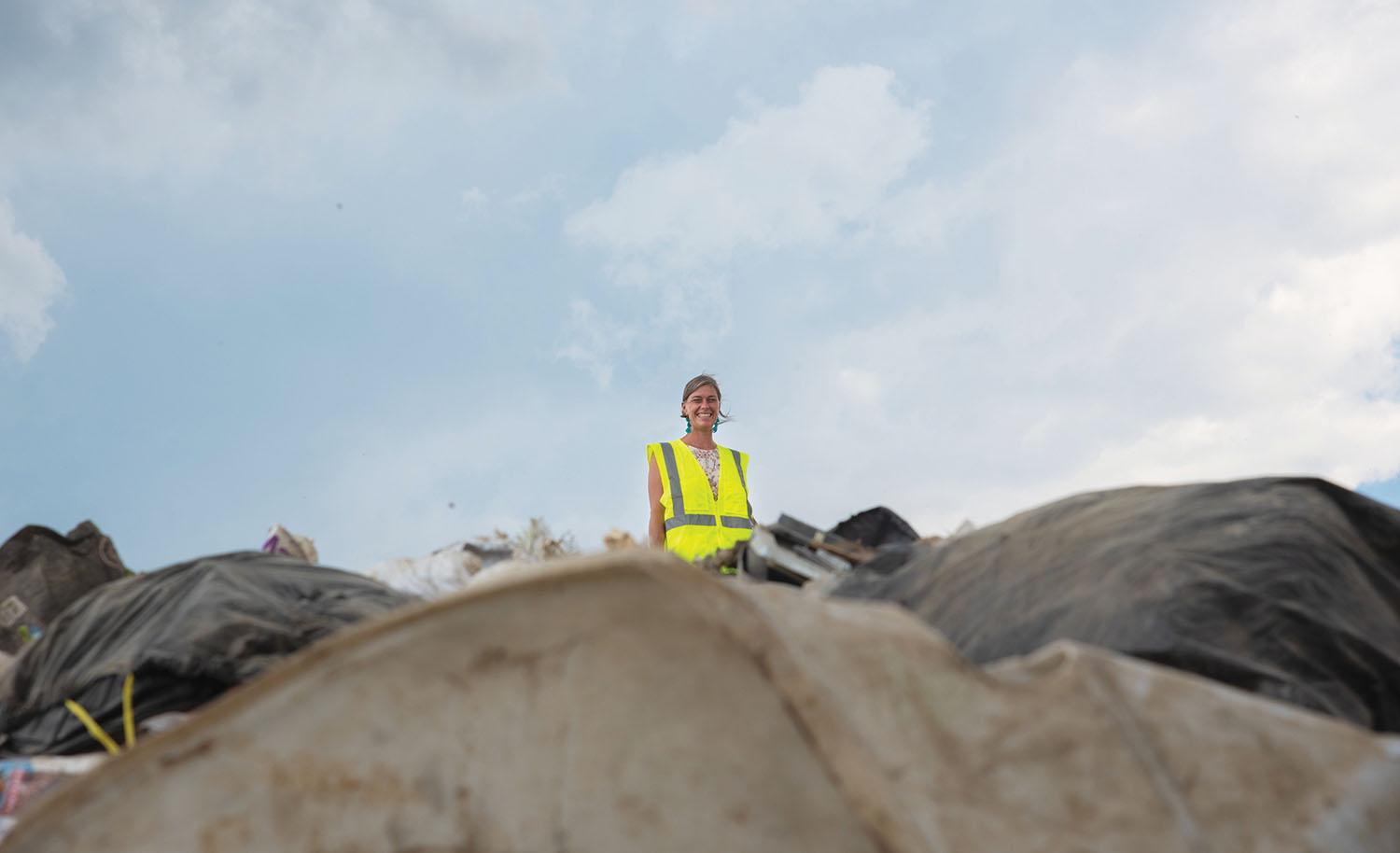 Hopkins County Regional Landfill is making efforts to contain and burn off the methane and carbon dioxide the trash produces, Ricker said. He said the landfill also collects water that runs down from the trash into a leachate system, where it is then sent out to be cleaned.

Similar to the environmental efforts by the Hopkins County Regional Landfill, WKU is also trying to find ways to reduce landfill waste on campus, Gafford said.

In fiscal year 2017, WKU produced 4 million pounds of trash, which was reduced to 3.35 million pounds in 2018, according to WKU’s Resource Conservation Fiscal Year 2018 Review.

The change can be attributed to WKU’s composting efforts. The campus went from collecting 2,500 pounds of compost in 2017 to 30,000 in 2018, said Courtney Martin, WKU’s assistant coordinator of Resource Conservation.

Gafford said there is also a push on campus to recycle as much as possible because picking up recycling is a fixed rate of $165 per month per container. Recycling more would lead to less of a cost for landfill waste, Gafford said.

One way WKU’s Resource Conservation Office is promoting composting and recycling is by doing waste audits. During the one-day events, staff members collaborate with students in environmental science and sustainability courses to sort through bags of trash and identify what can and cannot be recycled. This raises student awareness of what can be recycled to minimize landfill waste, Gafford said.

However, “waste is always an issue,” Gafford said.