On Sept. 28 and 29, the polls will open on TopNet for students to vote for positions on the Student Government Association. Students were invited to learn more about each candidate running for the executive positions of president and administrative vice president at this year’s town hall meeting held Sept. 24.

Students were able to hear each candidate’s take on their top issues as well as diversity, including the recent dropout of Nathan Terrell from the Edmonds-Norvell ticket, WKU’s COVID-19 response and transparency with WKU’s administration.

Why are SGA elections important?

SGA is “the premier organization founded to both represent and advocate for the entire WKU student body,” according to its webpage. This year, there are three candidates running for the most important executive positions in SGA.

The SGA president serves as the student regent to the Board of Regents, the governing body of WKU and two subcommittees of the board.

The SGA president also serves on the Steering Committee of the 10-year strategic planning initiative for WKU, the Board of Student Body Presidents for the Commonwealth of Kentucky and on the Kentucky Council on Postsecondary Education.

The Steering Committee overlooks construction plans for the Commons at Helm Library.

The Board of Student Body Presidents, “advise[s] the legislative and executive branches regarding post secondary education issues and concerns of students,” according to its website.

The Kentucky Council on Postsecondary Education states on the Kentucky Government page that it is “Kentucky’s adult and higher education coordinating agency committed to strengthening our workforce, economy, and quality of life.” 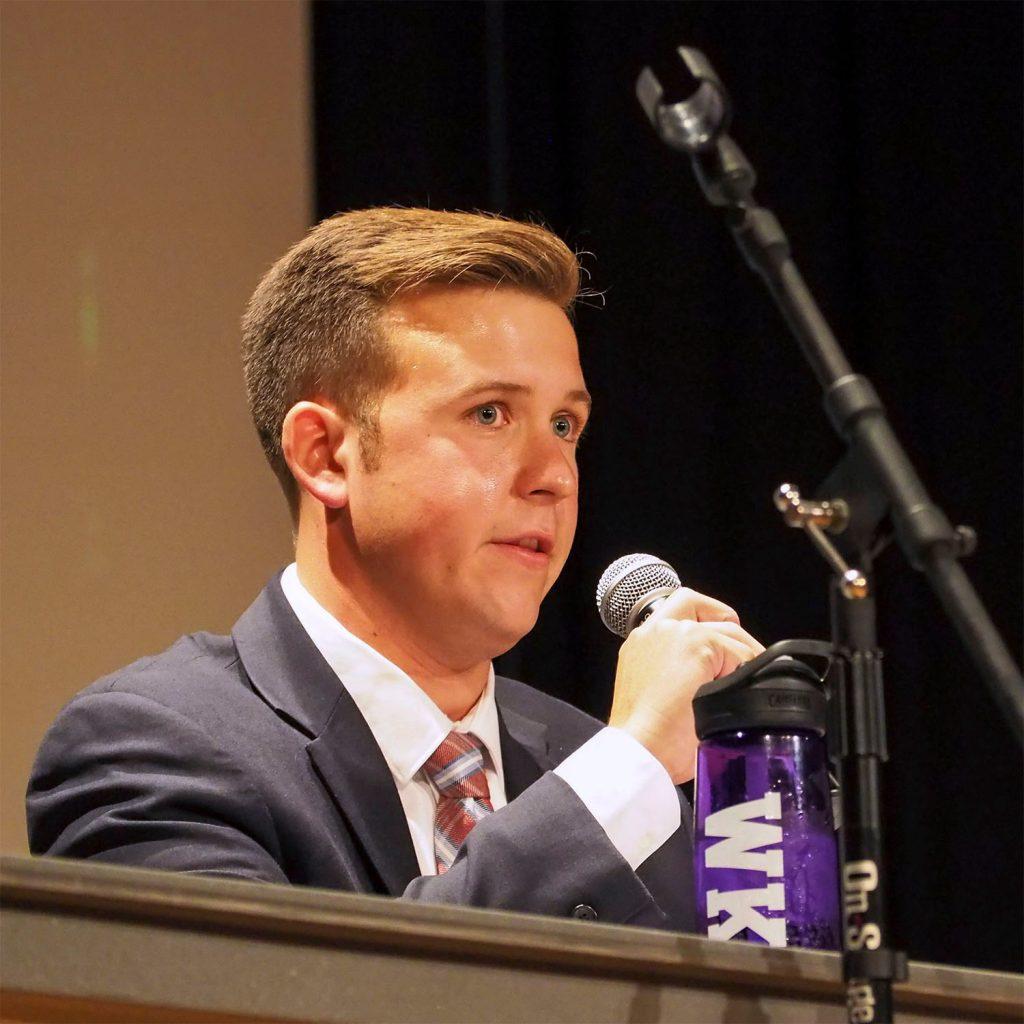 Garrett Edmonds is a senior from Island running for SGA president. He is currently in his second year serving SGA as the executive vice president, assisting current SGA President Will Harris.

As executive vice president, he said he pushed for a SGA budget model focused on bringing amenities to campus to improve student recreational life.

He also worked to appoint senators from various backgrounds in order to increase diversity and establish specialized Senate seats for underrepresented individuals at WKU.

If elected president, Edmonds intends to pass a bill establishing the position of Director of Outreach, which will bridge the communication gap between campus organizations and SGA.

MJ Mayo is a senior from Henderson running for SGA president. She served as a resident assistant in Zacharias Hall her sophomore year.

As an RA, Mayo swiped for students when they ran out of meal dollars for the week and walked students experiencing mental health crises to the WKU Counseling Center. She also researched funding outlets for students who were unsure if they would be able to stay in university due to financial issues.

Mayo co-authored a $10,000 grant awarded by the WKU Sisterhood her junior year in October 2019 to increase awareness on the issues that drive her campaign. One of the issues most important to her is food insecurity on campus.

She also ran for Senate last fall with the goal of increasing awareness of food insecurity. Mayo was able to pass a bill allocating funds to the food pantry to help them continue providing food to WKU and the Bowling Green community during WKU’s closure due to the COVID-19 pandemic.

If elected as president, Mayo intends to create a welcoming environment within SGA, ensure equal representation of students, establish a sense of hope among students and create reliability within SGA during these uncertain times. 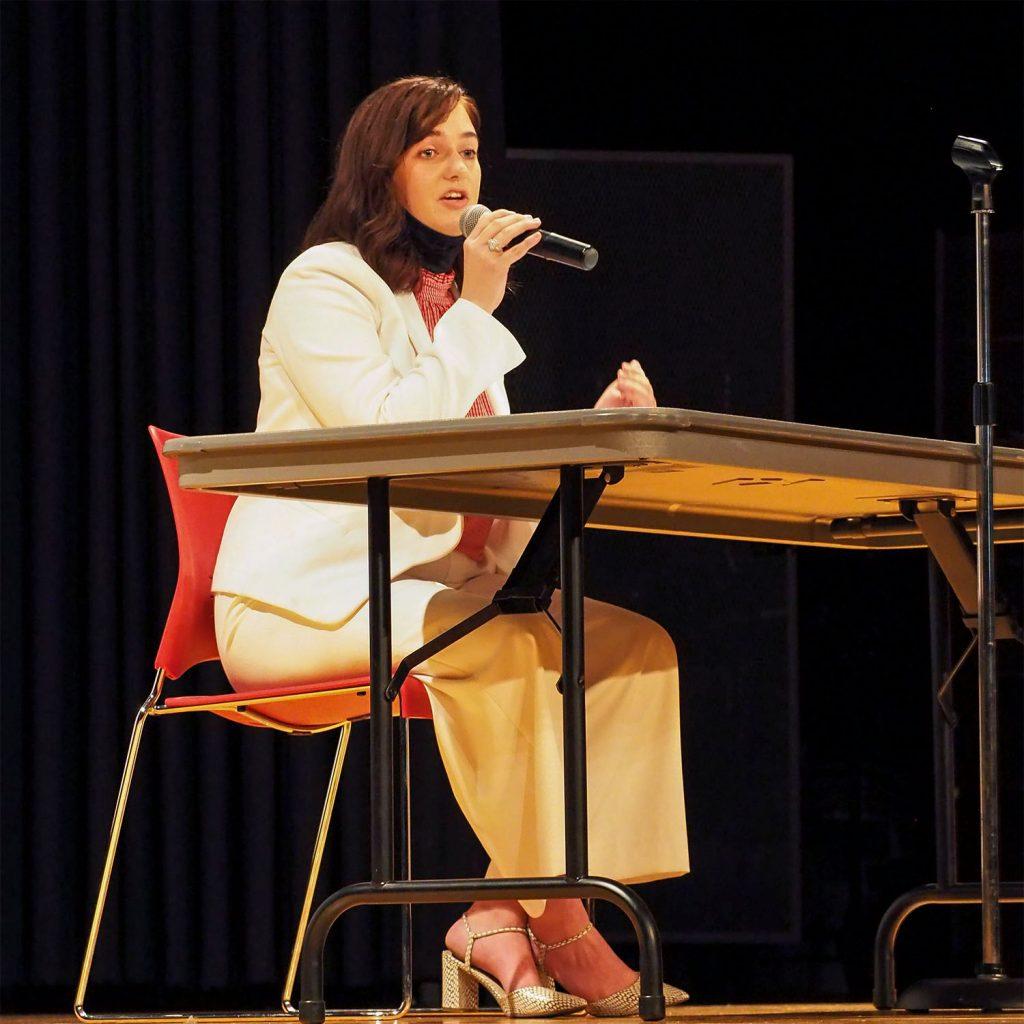 Henderson senior MJ Mayo, current senator for the Potter College of Arts and Letters, discusses her all-inclusive campaign platforms at the Herald Town Hall on Sept. 24. Mayo is running independently for the role of SGA president under a platform of student-led change.

The executive vice president helps the president in all matters except for those concerning student regent.

The executive vice president’s additional duties include serving on the Student Life Foundation, the Budget Council, the Parking and Transportation Committee and the Student Advisement Award Subcommittee.

Additionally, the executive vice president is in charge of organizing the annual Rally for Higher Education held in Frankfort.

The duties of the administrative vice president include handling SGA’s budget and all financial matters, recording all created legislation and chairing the Organizational Aid Committee.

The administrative vice president is in charge of ensuring funds get transferred to their proper place, certifying the budget is appropriately used, purchasing supplies and documenting all financial transactions made by SGA.

Abbey Norvell is a junior from Corbin running for SGA administrative vice president. She has served on SGA since her first semester on campus.

Her freshman year, Norvell served as a senator and was on the Organizational Aid Committee where she met with student organizations.

This past year, she served as the Director of Academic and Student Affairs. Her duties included creating and grading scholarships for the student body and informing SGA members on important class dates and scholarship related things.

As Director of Academic and Student Affairs, Norvell was able to restart and revitalize the Earn-A-Computer program, which allowed students to earn a computer free of costs via an application process.

She also created an application for a book scholarship benefiting Intercultural Student Engagement Center students last fall, which was her first semester serving as the Director of Academic and Student Affairs.

If elected into the office of administrative vice president, she wants to be purposeful in her creation of the budget, helping students obtain organizational aid and scholarships. Norvell also echoed Edmond’s statement in wishing to improve students’ experiences on WKU’s campus.

“Garrett and I have a few different goals we’d like to accomplish, and one of those is promoting and helping shape a connected campus,” she said.

Sept. 24’s town hall meeting allowed the two candidates running for student body president and one candidate for administrative vice president to elaborate on their ideas and the potential policies they will enact if elected into office.

The main priority for the Edmonds-Norvell ticket is establishing a sense of community among WKU students, and ensuring that the diversity represented on campus is mirrored in the SGA board.

One of the ways in which Edmonds and Norvell plan to create a community is by adding features on campus to improve campus life and ensuring communication between campus organizations and SGA.

Mayo hopes to establish food security on campus and institute a high level of safety and comfort in students quarantined within quarantine dorms. She also hopes to connect students to campus resources in their time of need. 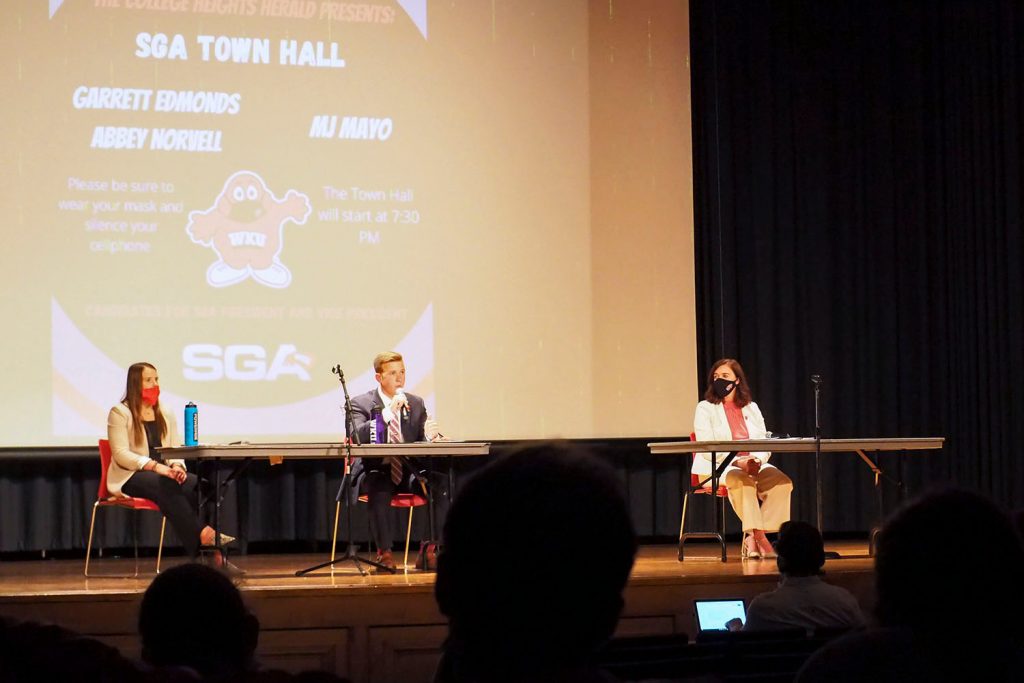 SGA executive candidates, from left to right, Abbey Norvell, Garrett Edmonds and MJ Mayo, address issues regarding their campaign platforms and plans for their potential election to a small crowd at the Herald Town Hall. Over the course of the hour-long debate, the candidates discussed and answered questions about their stances on a variety of issues relevant to WKU and the student body.

Both candidates agreed that an increase in diversity within SGA members is needed in order to accurately represent the diversity present on campus.

On the subject of Nathan Terrell, Edmonds said in the debate that, “What happened with [Terrell] is awful, it is an inexcusable thing.”

Edmonds reiterated that he and Norvell will “continue to advocate for students regardless of what has happened going into this year.”

“I strongly condemn any offensive derogatory statements or actions used by anyone against any identity,” she said.

She also combated Edmonds’ view that while mistakes had been made, most of them had been corrected regarding the issue. She said that some students reported missing meals, expired food in vending machines and a lack of wellness surveys conducted.

Edmonds believed that the workers behind WKU’s Quarantine Plan should be praised for the things they’ve done to minimize the spread of COVID-19 on campus.

Both candidates’ campaigns advocated for the increase in transparency between students on the matters of budget cuts.

“I think we need to have better transparency from a budget executive committee standpoint with our university faculty and staff,” Edmonds said.

He also emphasized that budget cuts are impacted by the state of Kentucky’s decision to “cut funding to higher education.”

Mayo focused on the lack of transparency in the recent non-renewal of Math Department Head Bruce Kessler’s contract.

“This is once again an example on the part of the university and its administration and the lack of transparency that they provide,” she said.

SGA meets on Tuesdays at 5 p.m. via Zoom. Students are encouraged to attend and offer their perspectives. They are also welcome to author and submit legislation.

Students can vote on Monday, Sept. 28 and Tuesday, Sept. 29 by going to the TopNet login page, scrolling to the bottom, and clicking the link to vote for SGA elections.

The results of the election will be announced after polls close at 11:59 p.m. on Tuesday.