WKU biology professor on the beauty of bugs

They’re small, they’re crawly and some might even call them creepy. However you perceive them, there’s no denying that roughly 80% of all animal lifeforms on Earth are insects. With such an overwhelming majority of our planet taking the form of miniscule arthropods, it makes sense that a dedicated few amongst us would embrace the mantle of investigating these curious creatures.

One of which is Keith Philips, a biology professor at WKU and an accomplished entomologist. Philips has been a professor of entomology for about 20 years, but he said his true start as an entomologist was in 1987, when he was a graduate student at Montana State University.

“I’ve had an interest in insects since I was about 6 years old, when my father saw me looking at bugs up at a cabin in the Ontario woods, where I spent my summers as a child,” he said.

His father suggested Philips start an insect collection, which he did with his dad’s help.

“I liked to collect all the different insects I saw, including butterflies, moths, grasshoppers and beetles,” Philips said.

What took this interest from a mere hobby to a professional pursuit was the guidance of professor Henry Howden, Philips’ mentor at his undergrad institution, Carleton University, in Ottawa, Ontario. 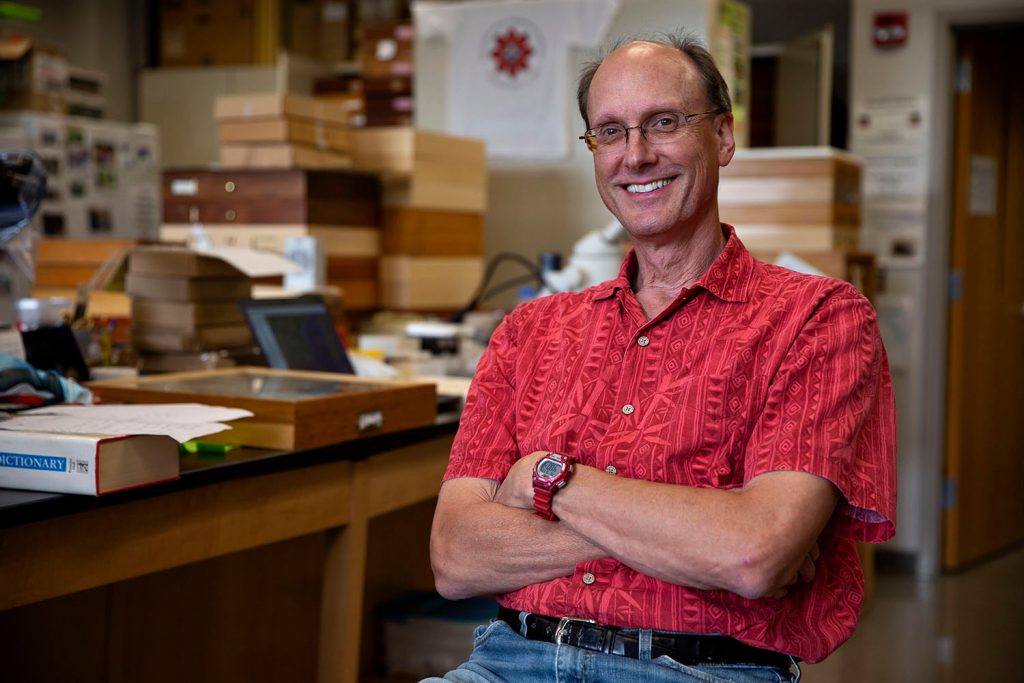 WKU biology professor Dr. Keith Phillips studies entomology, the scientific study of insects. He focuses on insect diversity in highly threatened habitats as a way of learning the effect of habitat alteration on different groups.

“He gave me a summer job working in his lab, processing insect samples — mainly specimens he collected during various field trips he took all over the place, including foreign countries,”  Philips said.

Intrigued by the diversity of beetles his mentor studied, as well as the variety of places he was able to travel in the pursuit of insect diversity sampling, Philips realized that entomology was the perfect way to combine his love of insects with his love of travel.

“Seeing new, unknown insects regularly, many of which we collect, and the discoveries about how they live and become diversified are deeply satisfying to me,” he said.

The most rewarding aspect of his job, he said, is mentoring and teaching students.

Tom Apostolopoulos, a biology graduate student from Weaverville, North Carolina, was taught by Philips and has worked alongside him in the field.

“I would say that my favorite part of being an entomologist so far has been exploring the caves of eastern Kentucky,” Apostolopoulos said. “People think that caves are scary and barren, but their biodiversity can teach us a lot about how animals adapt.”

Jake Bowen, a senior biology major from Brandenburg, said he first worked with Philips while studying dung beetles in Costa Rica. Enjoying the specialization of working in such a small field, he then decided to pursue animal research similar to Philips and has been taking his classes ever since. 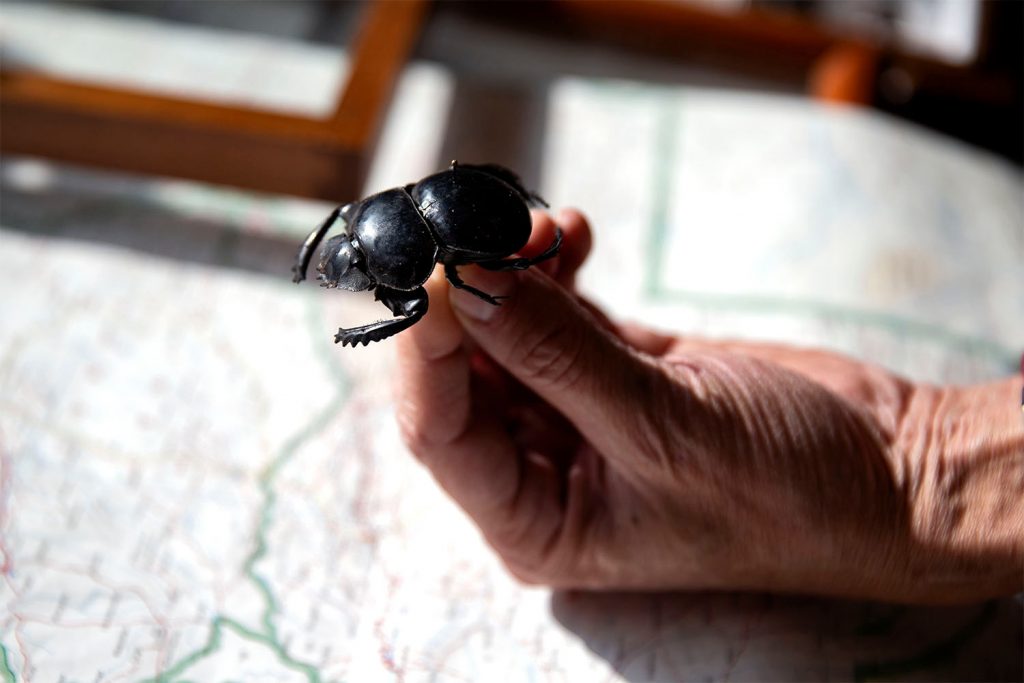 Phillips’ childhood interest in bugs eventually transformed into an expansive collection. His collection ranges from beetles to butterflies, with this beetle species in particular being a Scarabaeus cancer, a type of dung beetle.

“In observing and speaking with entomologists, I’ve found that it takes a special person with exemplary care, passion and patience to work with insects,” Bowen said.

Bowen said that working with such people inspires him, as it gives him hope that other scientists are just as passionate and invested in the study as he is.

“I also enjoy the diversity of this animal group, and the many bizarre and unique species that come with it,” he said.

Bowen doesn’t have one favorite insect, but said that wasps are “terrifyingly intriguing.”

“I’ve heard tell of a social wasp that, as adults, feeds off the excretions of their larvae, effectively farming food from their young,” he said. “There are also wasps that can pierce through bark with their ovipositor to lay eggs inside the prey within, and wasps that parasitize other wasp larvae. There’s even a spider wasp that removes the legs of its prey for ease of carrying.”

Philips’ favorite insect is the spider beetle — a species he has been studying since he was a doctoral student.

“They are incredibly morphologically and behaviorally diverse,” he said. “There are many new species we have discovered that represent new genera as well.”

Apostolopoulos said his favorite insect is the one he has spent time out in the field researching: a blind, carnivorous cave beetle called Darlingtonea kentuckensis. He said these beetles have a large distribution in caves from northern Tennessee through central Kentucky. Acknowledging the lack of connection between these caves, Apostolopoulos said he was attempting to figure out how these beetle populations are genetically related to one another.

For many, “terrifying” is a perfect adjective to describe the insect kingdom at large. Familiar with this common fear, Philips and Bowen denounced the stigma against bugs and provided positive perspectives.

Philips noted critical ecological services, such as decomposition and pollination, that bugs conduct to allow ecosystems to function. He said insects are “absolutely vital” in maintaining our global ecosystems. 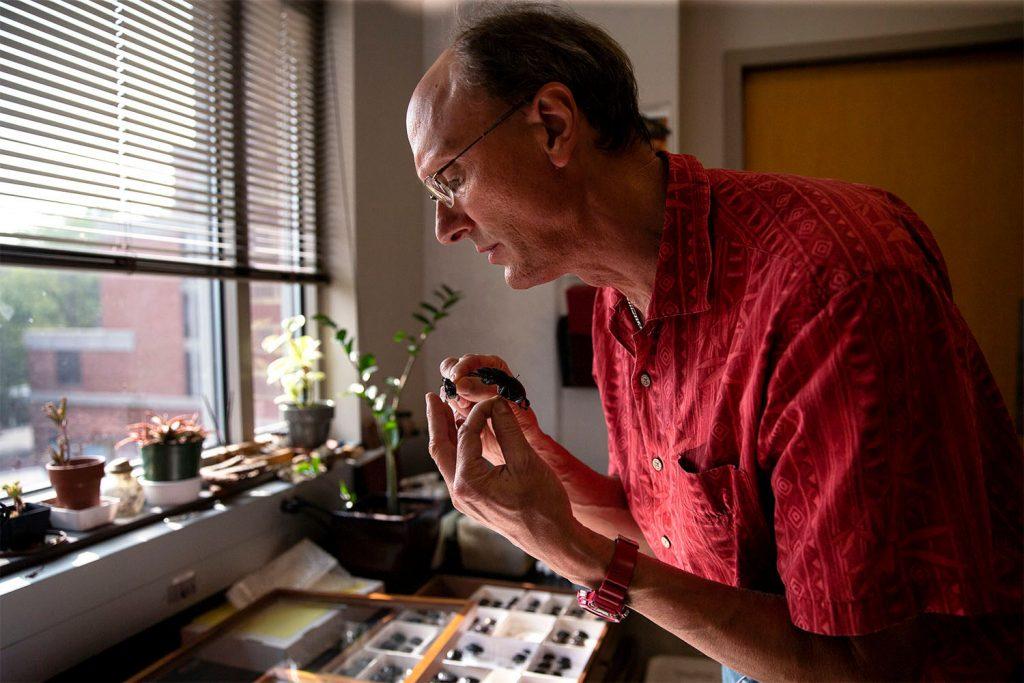 Although Phillips didn’t officially become involved in entomology until he was in graduate school, he was always interested in insects as a child. “Of about 1.8 million species described, insects account for about one million of these,” he said. “The diversity of morphologies and lifestyles is astonishing — no other group of multicellular organisms approaches the diversity of what we find in insects.”

Bowen acknowledged the importance of bugs in the ecosystem as well.

“Without insects, crops would not flourish as they do; several larger animals would suffer without them as food, and detritus and waste would encompass the Earth,” Bowen said.

Philips said insects are currently the most diverse organisms on the planet.

“Of about 1.8 million species described, insects account for about one million of these,” he said. “The diversity of morphologies and lifestyles is astonishing — no other group of multicellular organisms approaches the diversity of what we find in insects.”

Bowen also described his interest in the diversity of insects, and he said the variety of colors, shapes, sizes and behaviors of insects is “limitless.” Metallic sheens, colorful patterns, multiple horns and profound indents on their body are just a few. He said there are beetles that consume plant matter, that are scavengers and even some that are dung feeders.

“While some species are hard to distinguish, there are many that stand out visually, with wonderfully crafted mechanisms and stories of life,” he said.

Bowen expressed how bugs can be handled and appreciated through insect collections, “allowing someone to experience insects comfortably, without fear of being bitten, stung or crawled upon.”

Philips said researching insects is vital to answering questions important in medical research and that this research is resulting in discoveries leading to improved human health. Beyond medical research, he noted that the improvement of crop yields via improved pest control, and the heightened understanding of biodiversity and its protection are two other benefits of entomology.

For a field of study based on creatures so miniscule, it’s clear to see that entomology is a pursuit rich in both its plethora of subjects and in those passionately dedicated to its advancement.