On Dec. 6, the Sunrise Movement of Bowling Green will hold a climate strike. The organizers are encouraging students and community members to walk out of class and work at noon and meet at Cherry Hall. Protesters will then march down from Cherry to the Warren County Justice Center at 12:30 p.m. The rally will begin at 1 p.m. with various guest speakers. There will also be a climate vigil at Fountain Square at 4 p.m.

The Sunrise Movement is a youth-led international movement advocating for political leaders to take action to help reverse the effects of climate change. According to the movement’s official website, it wants to enact the Green New Deal, a 10-year plan to convert the United States to completely clean and renewable energy and guaranteeing a living wage job for all Americans.

The Sunrise Movement and other national and international organizations held strikes internationally between the week of Sept. 20-27, with the Bowling Green strike taking place on Sept. 26. The movement was youth-led across the world, with international activists such as Greta Thunberg drawing serious attention to the issue. Turnout was an estimated 4 million people worldwide, according to the New York Times.

The next global rally is taking place on Dec. 6 because this is the day of the United Nations’ annual climate conference. World leaders will meet in Madrid on this day to discuss climate change, and the Sunrise Movement wants to emphasize its goals.

The Sunrise Movement has local hubs in which youths organize within their own communities and plan strikes and other activism mechanisms. 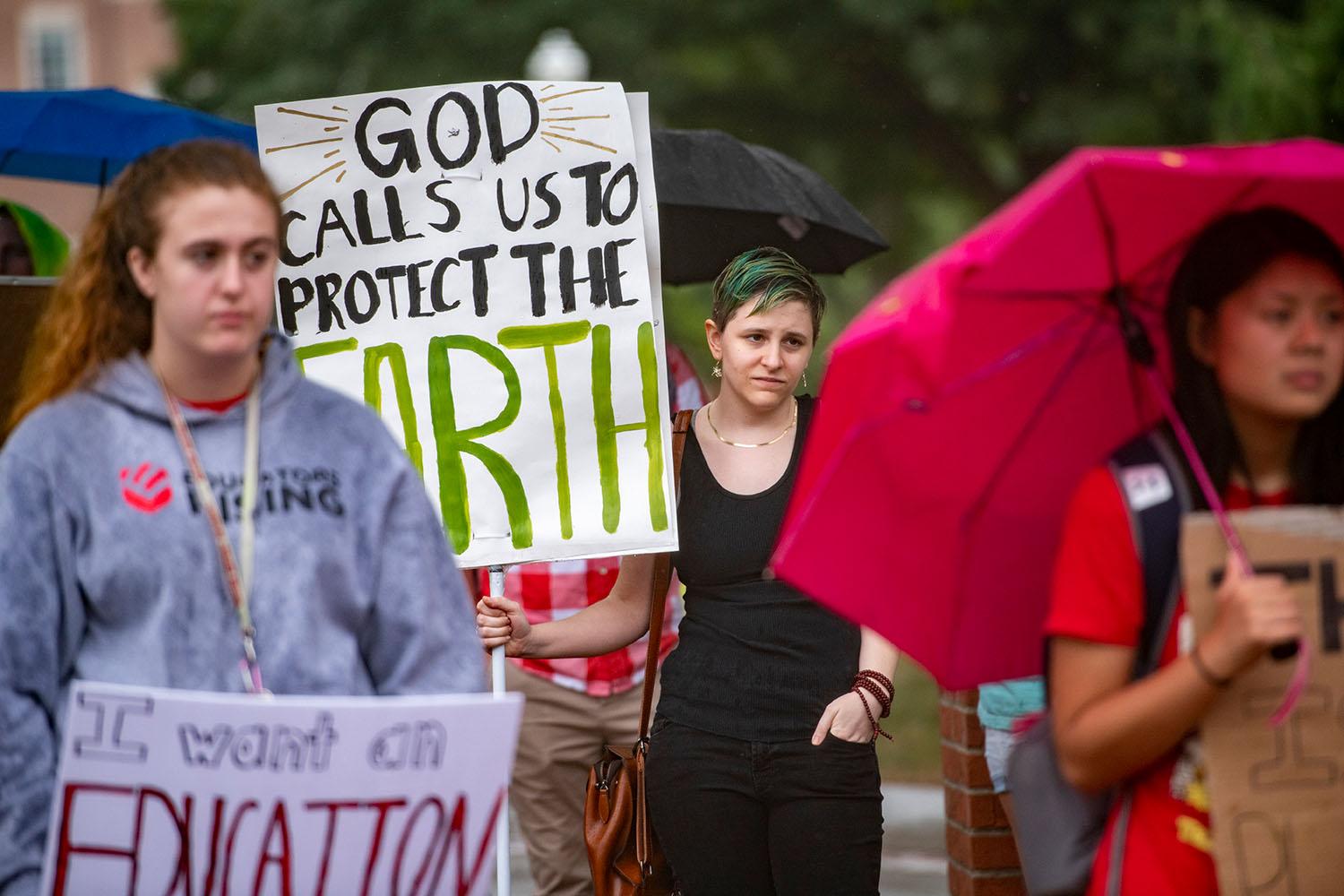 Students and community members gathered in coordination with the Global Climate Strike on Sept. 26. People protested because of the lack of action combatting climate change. Another strike will be held on Dec. 6 in support of the Sunrise Movement, also protesting the inaction toward climate change. Olivia Scott, a spring 2019 alumna from Villa Hills, attended the Sept. 26 protest because it was the closest place to her hometown to protest. “It’s an essential crisis,” Scott said. “I felt obligated to step up.” (Photo by Lily Thompson)

Jessica Williams, a junior from Florence, is the project manager of the climate strike in Bowling Green. Along with Louisville senior Ryan St. Clair, she is one of the principal organizers. They have recruited approximately 40 people to help with the organization and preparation of the strike.

“Most people take it pretty positively and support what we’re doing,” Williams said. “A big group of people are interested in coming to the strike. We estimated about 100 people at our last strike, and we’re hoping to have more.”

Bowling Green residents preparing for the climate strike have had weekly meetings over the past few months, planning every detail of the strike and recruiting more people to join the movement.

Junior Sabre Semrau of Crestwood recently joined the Sunrise Movement as the art manager. She participated in the Sept. 26 strike, and her involvement grew. The primary organizers recruited Semrau after seeing some of her work, such as her zine, Friends of Dorothy. Her work for the strike has involved creating stencils for posters and spreading awareness.

Semrau is enthusiastic to see the impact of the strike on campus and in the community as the organization spreads its message.

“I’m excited to see the turnout for the strike and hear the speeches from members of the community regarding their personal experiences with climate change and environmental degradation,” Semrau said. “It really inspires and motivates me when I see people around me getting passionate and involved about a pressing issue.”

Semrau also hopes to bring attention to intersectionality on the topic of climate change. 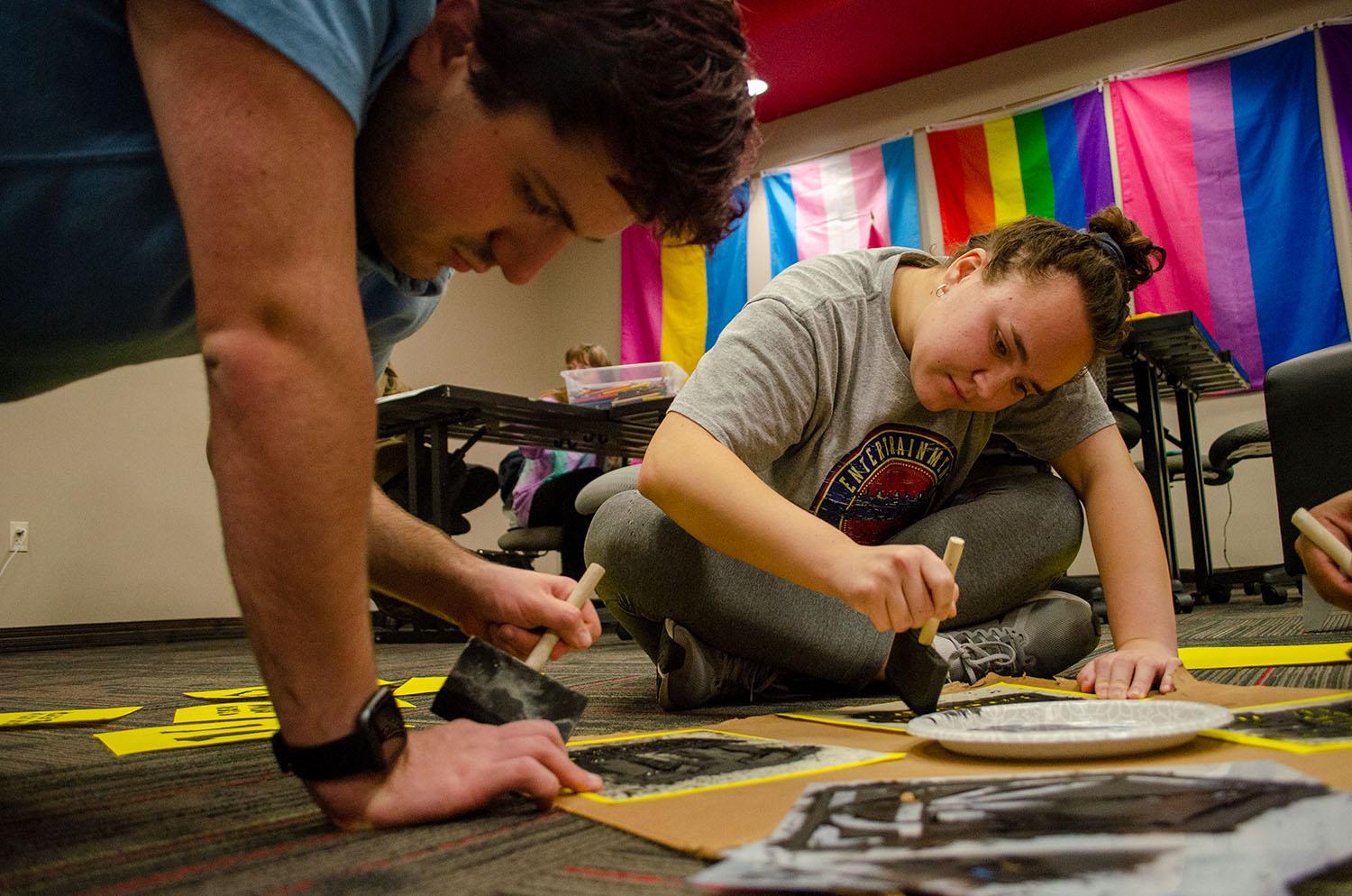 Trevor Harry (left) and Bridget Bevin, freshmen from Louisville, use stencils to make posters for the climate strike to take place Dec. 6. Harry, an environmental science major, and Bevin, a political science major, both find climate change to be an important cause to be involved in, so they joined the Sunrise Movement. (Photo by Allie Hendricks)

“I get to distribute my zine that features submissions from a number of WKU students regarding the intersectionality of environmental justice, and how environmentalism is important to different identity groups in a variety of ways,” Semrau said.

The Sunrise Movement of Bowling Green has generated support from other members of the community who are not students. Meliha Salcinovic, a WKU alumna working as a nurse in Bowling Green also got involved with the movement through social media and outreach.

“I’ve always been passionate about climate change, and since I’m no longer a student, I decided to find some local community organizations to get involved with,” Salcinovic said.

The rally will include speakers such as Kentucky Representative Charles Booker, activist Francisco Serrano and Williams herself. They will address topics such as the amplified effects of climate change on climate refugees and the LGBTQ+ population. Williams said the organizers of the Bowling Green strike chose the Warren County Justice Center as the location for the speakers because it is near Senator Mitch McConnell’s local office.

“We want to bring awareness to the injustices that Mitch McConnell has brought to our country by being the Senate majority leader,” Williams said.

Williams is hopeful that the strike will educate and inspire the people of Bowling Green.

“The only way change is going to happen is if people come together,” Williams said. “It’s incredibly important that we all come together and show our government, fossil fuel CEOs and billionaires that we’re not going to be pushed around any longer.” 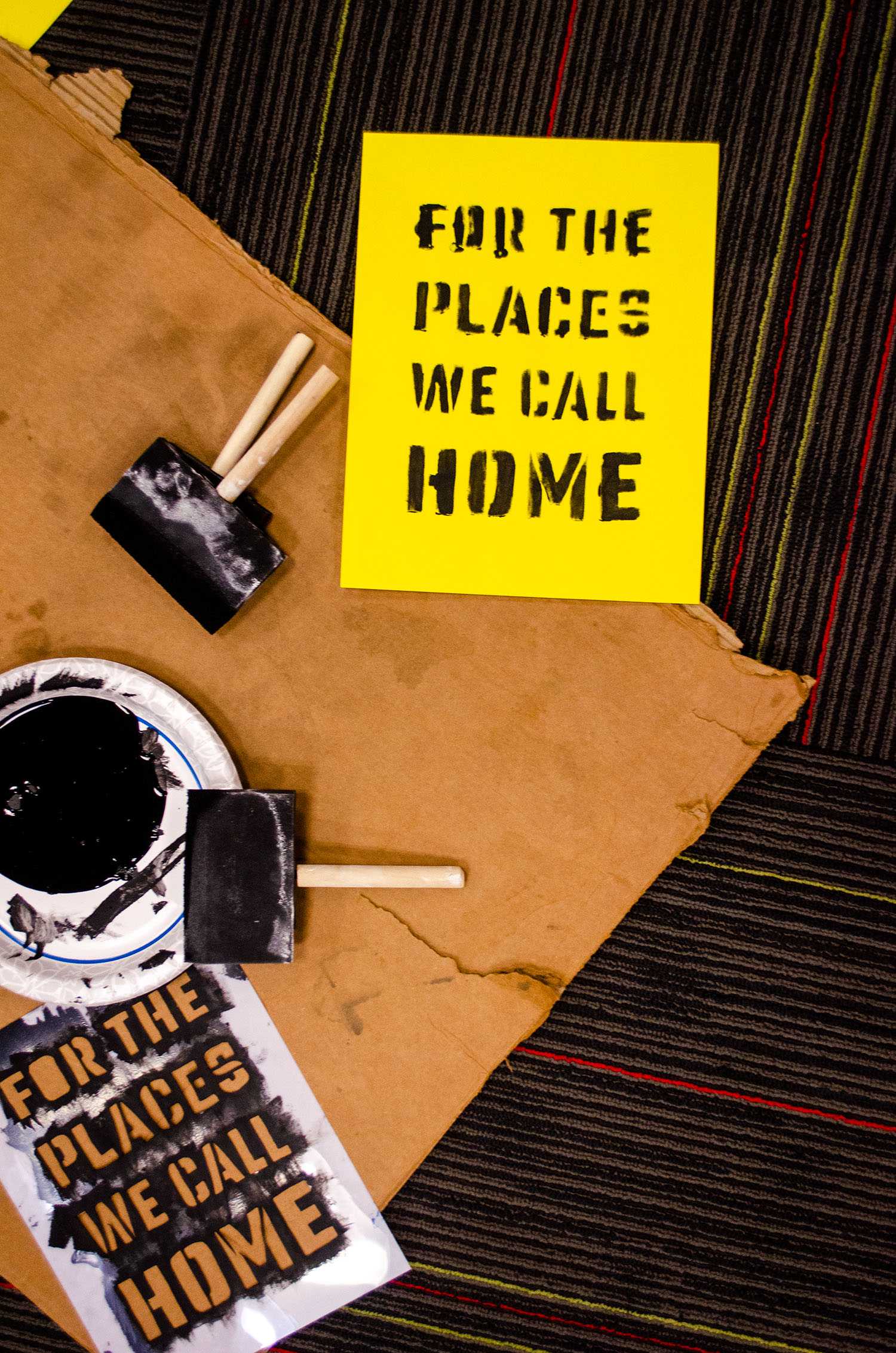