Behind the scenes with drag kings and queens

On the night of Thursday, April 6, drag kings and queens rushed around a makeshift green room at Carroll Knicely Conference Center. Rectangular tables and colorful mirrors lined the room’s tan walls. Plastic wrap covered the room’s geometric carpet to protect it from the flying powder of the performers’ makeup. As they pinned their wigs, contoured their cheekbones and tied their corsets, the performers exchanged stories about their experiences with drag.

“It was the biggest crowd I’d played to until Bowling Green Pride,” Joshua Finn said of last year’s show. Finn, 28, is a Fall 2017 WKU alumnus also known by his drag name Geneva LaDiva.

“It was terrifying and awesome,” she said as she styled her short, black wig. 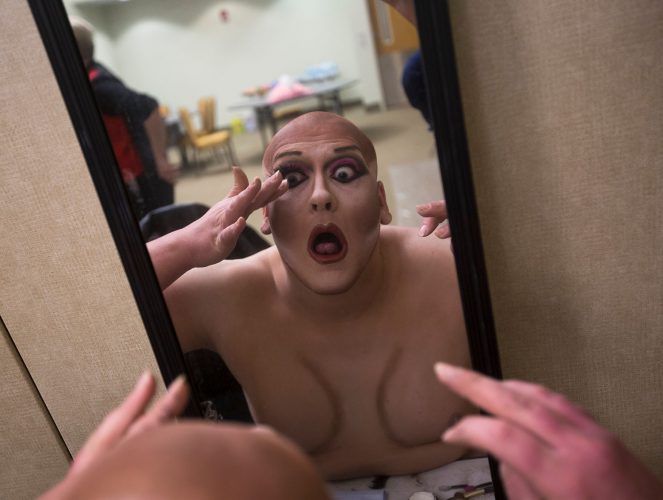 Joshua Finn, who performs as “Geneva LaDiva,” graduated from WKU in December 2017. Finn has performed in three of the four annual Housing and Residence Life drag shows. Photo by Lily Thompson. 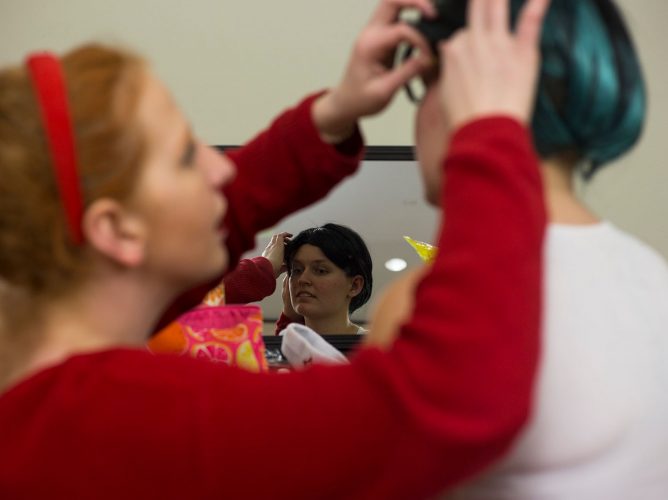 Jeanie Battaglia, left, glues down the wig of Madeline Louise, who performs as “Richie Seamans.” This was Louise’s first drag show. “A lot of people that was there [at the show] has never seen a female impersonator before or ‘Drag Show,'” said Venus Knight, a participant who has been in all four shows. Photo by Lily Thompson. 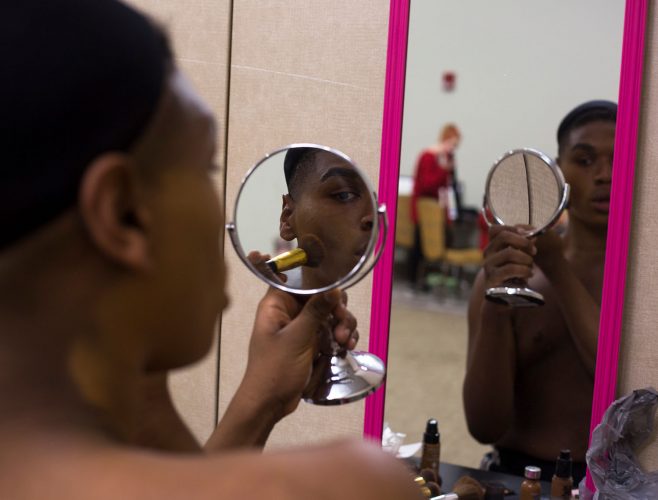 Quest Broussard, who performs as “Miz. Thickumns,” arrived at the Knicely Center two hours prior to the show to begin putting on makeup. This show was the first time Broussard has participated in the annual Housing and Residence Life Drag Show. Photo by Lily Thompson.

It was 7 p.m. and just an hour away from the start of the fourth annual WKU Drag Show sponsored by Housing and Residence Life.

What started as a shot in the dark four years ago has evolved into an ever-expanding cultural mainstay for the LGBT community at WKU and in Bowling Green, said Heather Thomas, apartments coordinator at HRL and the chair of the drag show committee. Thomas was part of the group that started the event in 2015.

As the event began to grow in popularity, the show moved last year from a banquet room in Downing Student Union to a higher capacity ballroom at the Knicely Center on South Campus.

“We’re hoping to hit 400 this year,” Thomas said as a parade of students and community members filed into the ballroom. 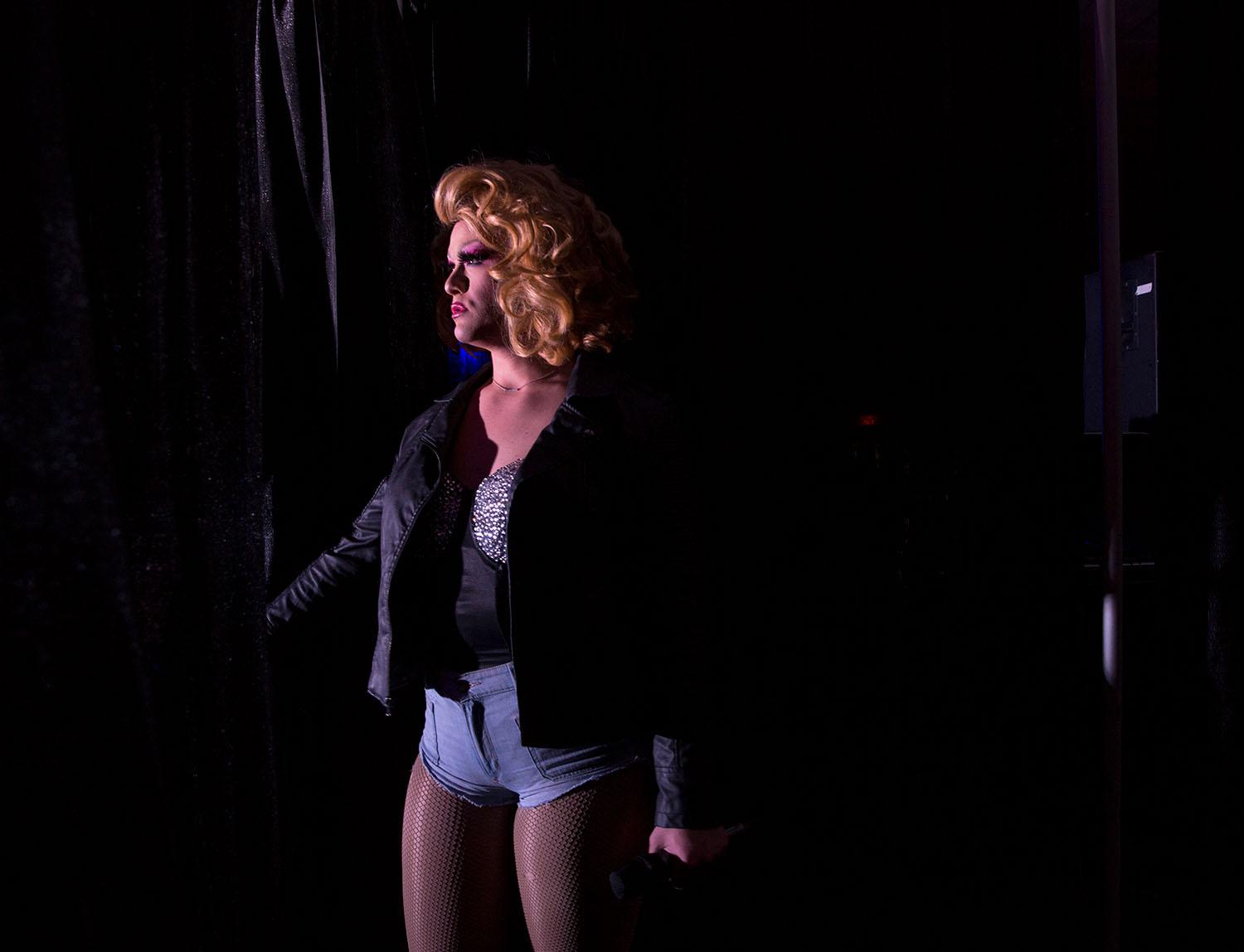 Thomas said the show’s accessibility leads to a bigger, more diverse audience than a typical drag show. Unlike many drag shows that take place at bars, the WKU event is free, all-ages and open to the public. She said this accessibility also allows drag hopefuls to try the craft out for the first time.

Several of the show’s 13 performers got their start in drag at previous years’ shows, including Parsons, a mechanical engineering major. An actor and performer throughout high school, Parsons said she was inspired to audition for the show after watching the LGBT-centered documentary “Paris is Burning” in her history of sexuality class. She now performs periodically at pride festivals and as a cast member of the O’Haras, a Bowling Green drag troupe.

“It’s a fun and comfortable space for people to evaluate what we think of as gender and why and just really to point out how silly it all is,” Parsons said. 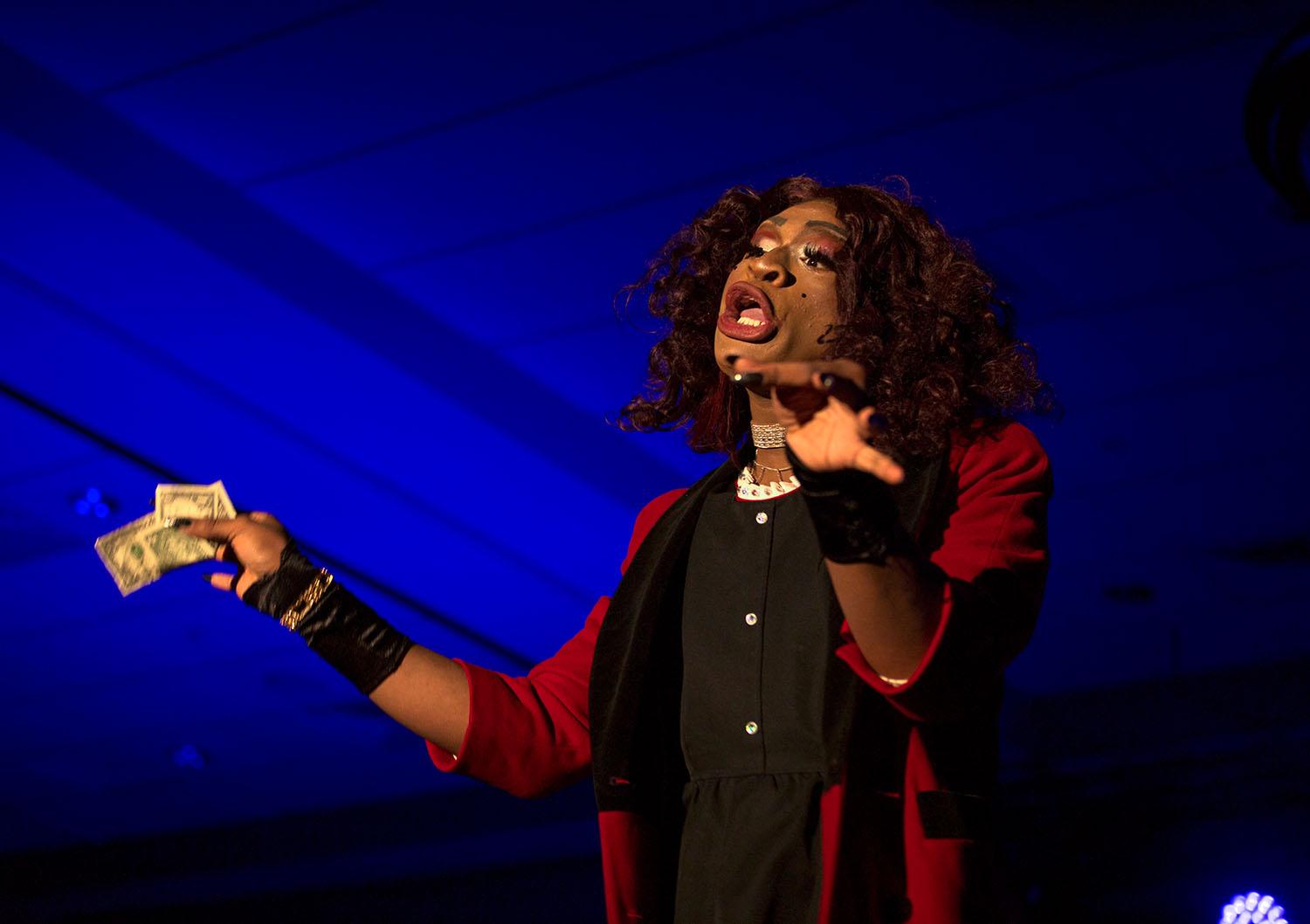 Broussard participated in the annual HRL Drag Show for the first time this year. Broussard has been practicing makeup and drag since high school, but this was his first performance before an audience. Photo by Lily Thompson.

Though Broussard said he has been practicing makeup and dressing in drag since high school, he was nervous to perform in front of an audience for the first time.

“I’m excited to show bitches what I got, but I’m also like kinda scared because it’s scary,” Broussard said. “I am a performer though, darling, so I gotta get this. I gotta do what I gotta do. Like Precious said, ‘Real women make sacrifices.’”

Even for seasoned pros like drag veteran Joshua Finn, this self-expression can bring about nerves. Finn performs under the name Geneva LaDiva and has been performing in drag for over 16 years, 13 of which have been spent in Bowling Green. Still, he said, his mother’s attendance at last year’s show made him nervous. 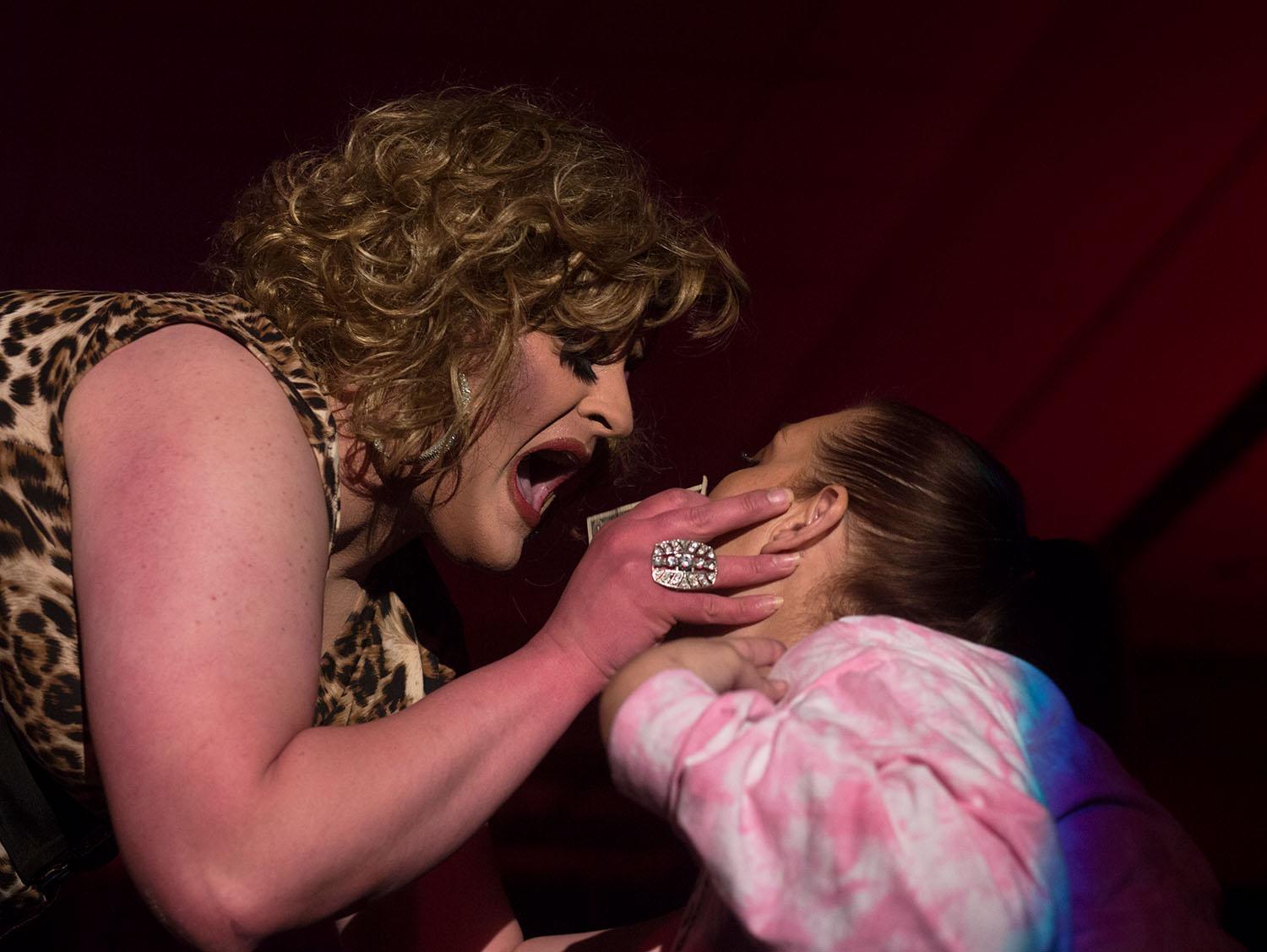 Geneva LaDiva kicks off the show with a performance of “…Ready For It?” by Taylor Swift. Photo by Emily Moses.

“I was onstage my first number, and my knees were shaking, and I felt like there was a brick house sitting on me,” Finn said. “But after my first number, the nerves kind of went away. She tipped me while I was performing and whatnot, so it was pretty cool. I was glad to have her here.”

Finn’s mother, Debbie, is a 63-year-old retired preschool teacher from Franklin. She said she has come to appreciate her son’s profession over time.

“You know, at first I had a hard time with it,” she said. “After I got used to it and everything, I was like, ‘Go for it. The more the better.’”

“Being in a place like this with such a closely-knit, vibrant and diverse queer community is something I want to hold onto until I die.”

“I appreciate being able to deconstruct gender so much,” Malone said. “It’s so affirming. It is absolutely a miracle that I live in a place with such a blooming local drag scene.”

Malone also said campus-sponsored events that support and uplift the LGBT community are especially important in light of WKU’s low ranking on the Campus Pride Index, a nonprofit project that aims to assess institutional LGBT inclusion.

“We need to be more supporting of queer people than we are as a community and as a municipality,” Malone said. 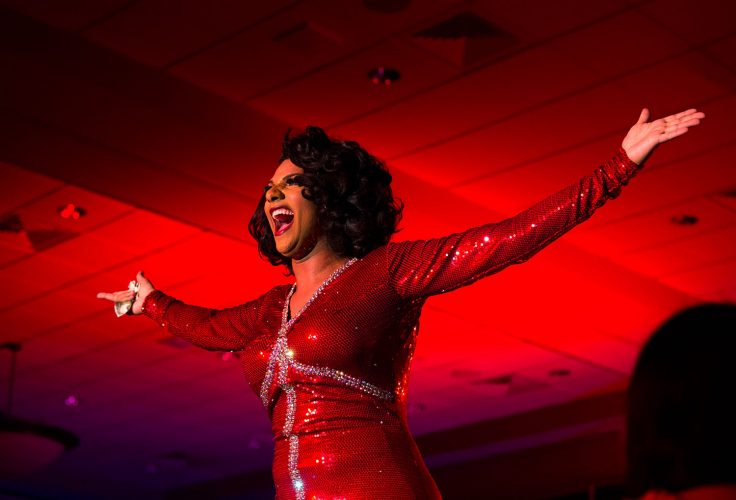 Venus Knight, a career female impersonator and WKU alumnus, has been in all four of the annual HRL drag shows. Knight was employed by HRL during her time at WKU. Now, Knight works as a behavior counselor but continues performing as Venus as an outlet to express herself and bring joy and entertainment to others. “Venus means the world to me because I am Venus and Venus is me,” Knight said. Photo by Lily Thompson. 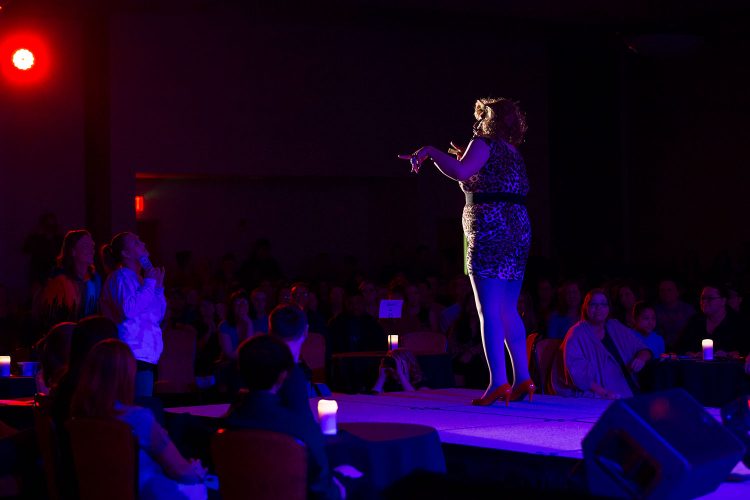 Finn performs as “Geneva LaDiva.” Finn has been performing drag for over 16 years and has been involved in the annual Housing and Residence Life drag show three times. Finn said that drag is a way to express yourself and defy social norms. “I know it’s cliche to say, but you don’t choose drag,” Finn said. “Drag chooses you.” Photo by Lily Thompson. 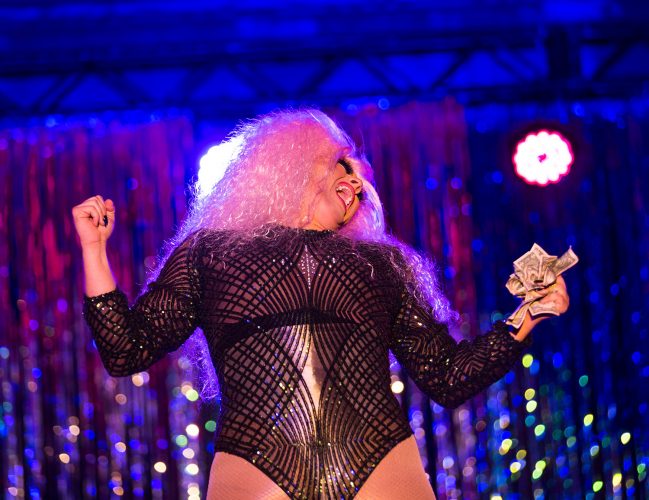 French performs as “Lily McQueen Fitzgerald.” French graduated from WKU in spring 2017. After relocating to Nashville, French said that Bowling Green is just as supportive of an atmosphere in drag as the larger city. “Bowling Green is always a home I can come back to,” French said. Photo by Lily Thompson.

Malone said the most important aspect of drag is that it provides a sense of community for LGBT-identifying individuals.

“At the risk of sounding like the biggest cliche ever, coming out totally turned my life around,” Malone said. “It gave me something to fight for, and being in a place like this with such a closely-knit, vibrant and diverse queer community is something I want to hold onto until I die.” 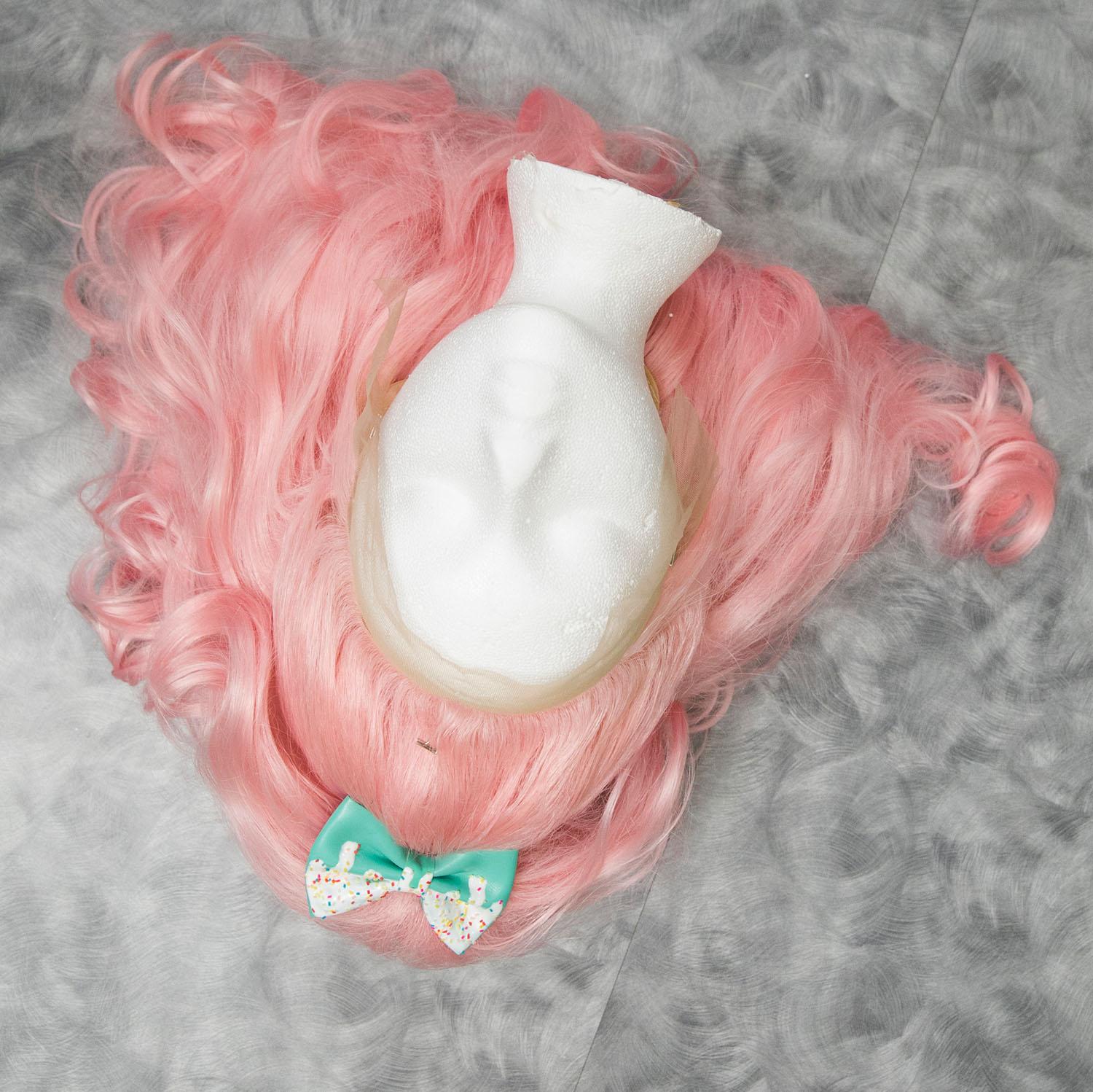