The beginning of a Gospel Community Church service in Owensboro took place in a small youth Sunday school classroom at a separate community church in 2015. It was led by WKU alumnus and founding pastor, Danny Hinton. Just 12 audience members sat circled around him in the audience, all of whom were deaf.

The sermon that began the church was completely silent. Hinton, who is also a licensed professional ASL interpreter, preaches his sermons in American Sign Language (ASL). The church is now one of the estimated 39 churches in the U.S. that focuses on reaching out to the Deaf community, Hinton said.

Today, the church continues to add to Hinton’s vision in making every aspect accessible to all churchgoers. Pews are filled with recurrent faces, but Hinton does not forget to greet the new ones whether with voice or hands. His sermons are conducted through speaking and signing simultaneously to his growing audience, and he occasionally features other pastors from Deaf churches across America as well. Other pastors of the church who are not well-versed in ASL have a translator on stage with them to sign.

When news of the new church with a deaf ministry got out, other people who felt they never belonged anywhere else began to show up.

“Deaf people, I found out later, and folks with special needs just don’t feel like they belong,” Hinton said. “They feel lesser in the community.”

When news of the church that accommodated the deaf community spread, others with differing conditions began to attend. People who are blind, in wheelchairs, and those with conditions including Down syndrome and cerebral palsy began to attend the church — they weren’t deaf, but they began to show up through word of mouth. Hinton said after three weeks of their first meeting with 12 people, their numbers had risen fourfold.

Hinton realized he’d need a bigger space quickly. The gym of a community church was not going to hold the congregation for long, and it was not completely accessible to everyone who wanted to attend. In 2017, Hinton purchased a building with the intent to build a church that accommodates the deaf community and other people who have since joined the church. With the building being on the market for as long as it had been, he knew it was going to require extensive amounts of work. However, the price, timing, and his vision drove him to the decision to buy.

While applying for loans to get the building, Hinton was rejected by a few banks. It took multiple meetings with bankers to find one who saw a fraction of the potential Hinton did. Construction work on the building began quickly, with Hinton at its forefront. The new building was promising for his vision until two days after the bank loan was signed when the roof caved in and left them with nothing once again. 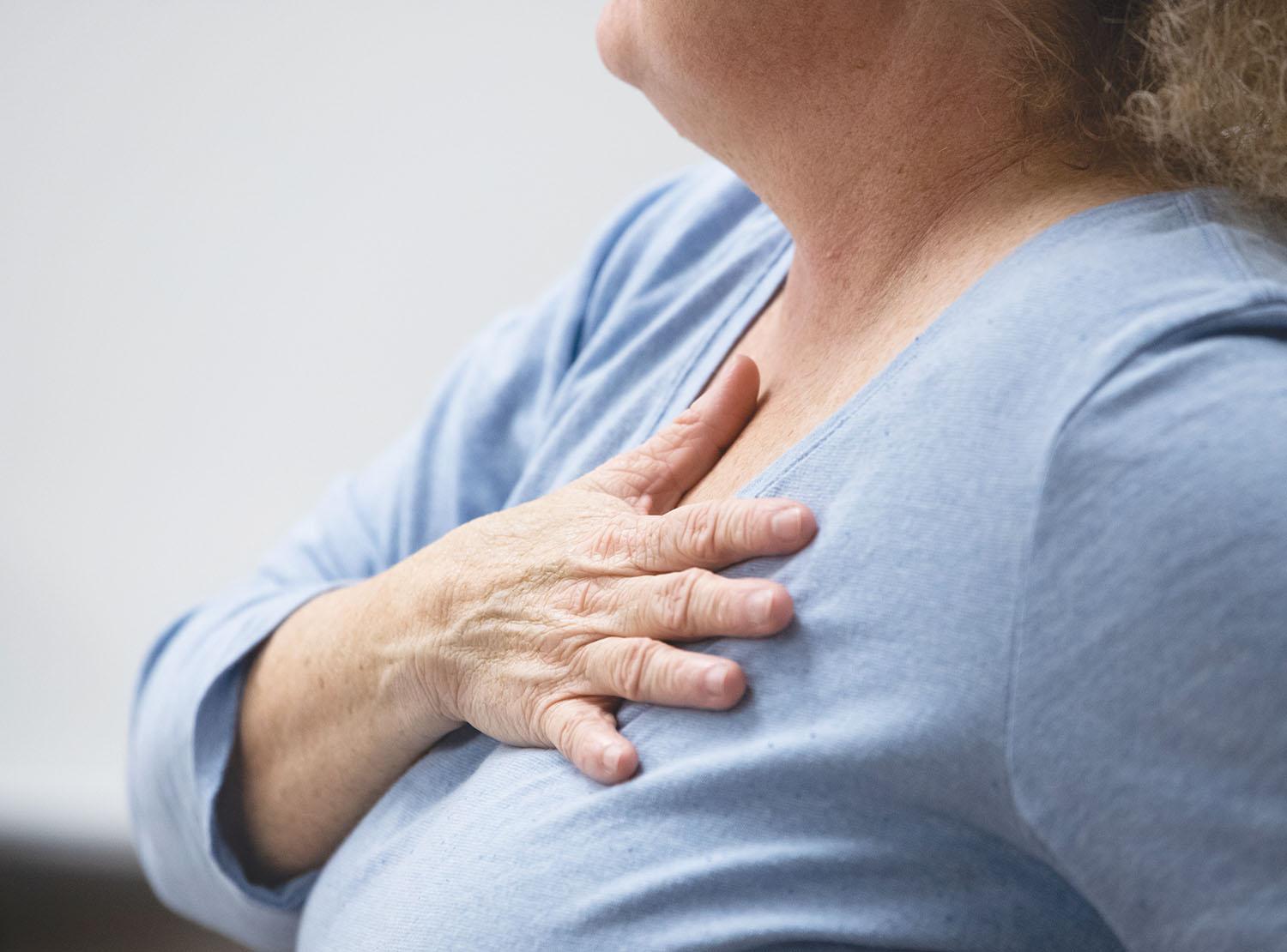 Members of the congregation of Gospel Community Church worship during a Sunday service on Feb. 16. Gospel Community focuses on being inclusive to people of all types, especially the deaf. “We wanted to go farther than accommodation and rather try to strive for being totally inclusive so that anyone can enjoy the service regardless of any circumstance and really feel like they are a part of the congregation,” pastor Danny Hinton said.

“We had to take all the loan money to fix the roof, and we were stuck — we were back to nothing,” Hinton said.

Despite this unforeseen event, Hinton kept moving toward his vision. A church in Kansas heard about what Hinton was trying to do for the community and sent 18 volunteers to help rebuild what was lost.

After that, it was up to Hinton.

“I just decided I’m gonna get up every day and go swing a hammer,” he said.

When striving for inclusivity for people who are deaf, it is important to note correct phrasing and understanding of the subject. “For Hearing People Only” by Matthew Moore and Linda Levitan is a textbook guide for hearing people from the perspective of someone who is deaf in order to further explain common misconceptions or areas of confusion for the hearing.

One large aspect of their writing is explaining the difference between ‘deaf’ and ‘Deaf.’ The lowercase ‘d’ indicates someone who does not have the ability to hear, and thus is the broadest term. However, the use of the uppercase ‘D’ represents a person who is medically deaf and chooses to identify as being a part of the Deaf community. Moore and Levitan refer to Deaf culture as being similar to ethnic minority groups in that they feel a sense of pride in their culture and surround themselves with others who have this same feeling, among other characteristics.

Phillip Boyd is also someone who emerses his life in working to better the community’s inclusivity for deaf people. He is the only professor in WKU’s ASL program who is deaf and a part of the Deaf community. Boyd’s quotes were communicated with the assistance of a current ASL student. The student is not a registered interpreter and, thus, some responses may be worded differently than what Boyd intended. 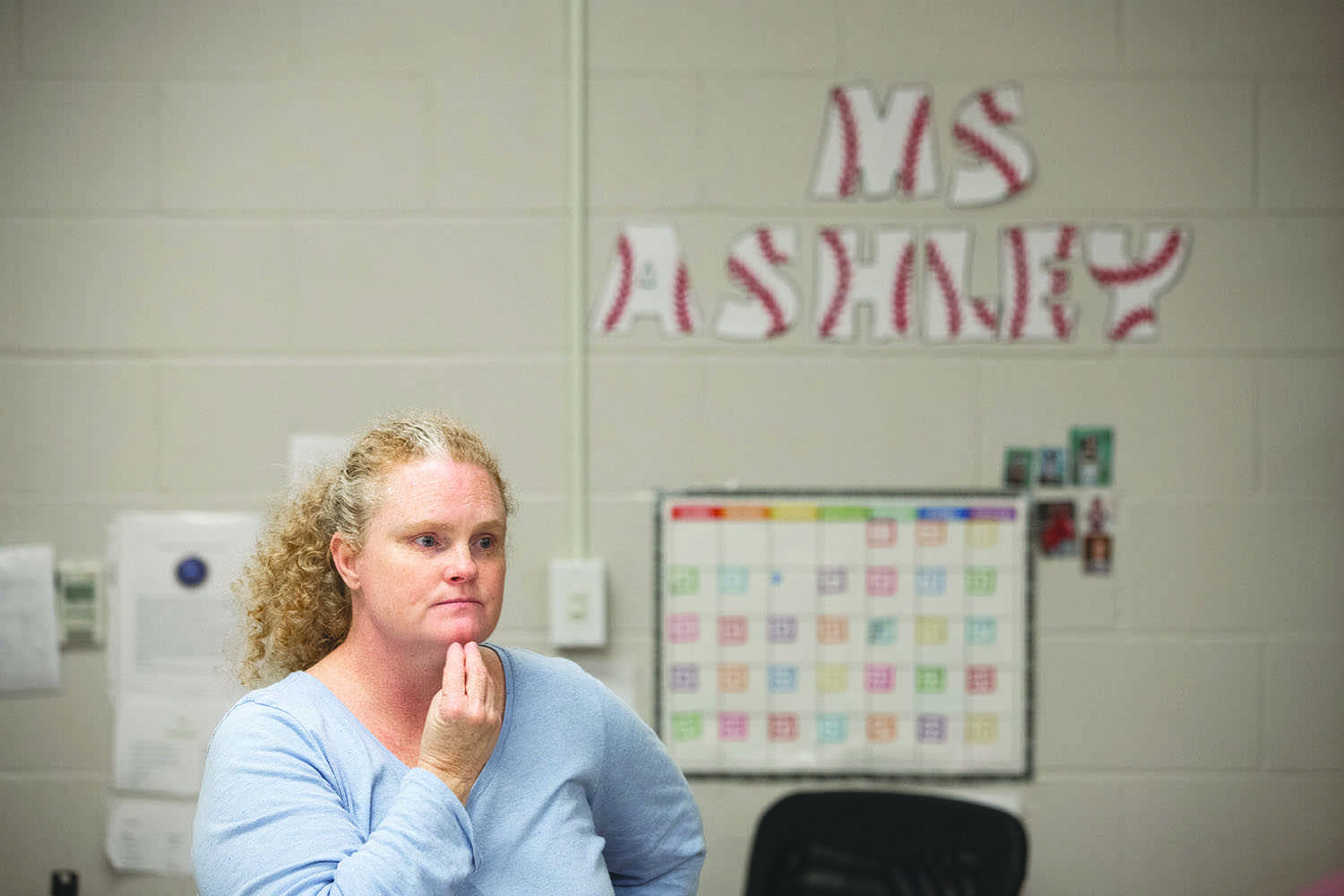 Kasey Mayer teaches American Sign Language classes each Tuesday night for Gospel Community Church. “I think that it’s important so that people can learn to communicate with those in the Deaf community,” she said. “The more people that are able to be educated about the Deaf community, the better.”

Boyd works to spread ASL to whomever he can, including teaching high school students in extracurricular groups. He thinks learning to sign is imperative because everyone should have the opportunity to communicate. In public, he often has to write questions and responses on paper to communicate with others.

“I live around hearing people, and if you know how to sign, then I prefer that, and that’s why I like being around here,” Boyd said. “If they can’t sign, then I can write back and forth. It takes a long time, but I understand that.”

Boyd did not have many accommodations met throughout his schooling. It was not until his college years that he was in programs specifically shaped to help deaf students.

Today, he thinks WKU does an excellent job in offering different resources for students who are deaf, such as having an interpreter in class with them who signs what the teacher is saying, or they have the option to have what the teacher is saying transcribed through typing. WKU’s resources have allowed Boyd to proudly witness the graduation of some of his students who are deaf.

This passion for inclusive communication is shared by Ryan Linton, a senior from Louisville who is graduating with a minor in ASL studies. Linton initially found an interest in ASL when he took an intro class for a language requirement three years ago. He also works in the ASL lab located in WKU’s Academic Complex, where students in the department can go for a “voice-off” environment where only sign language is used to communicate. 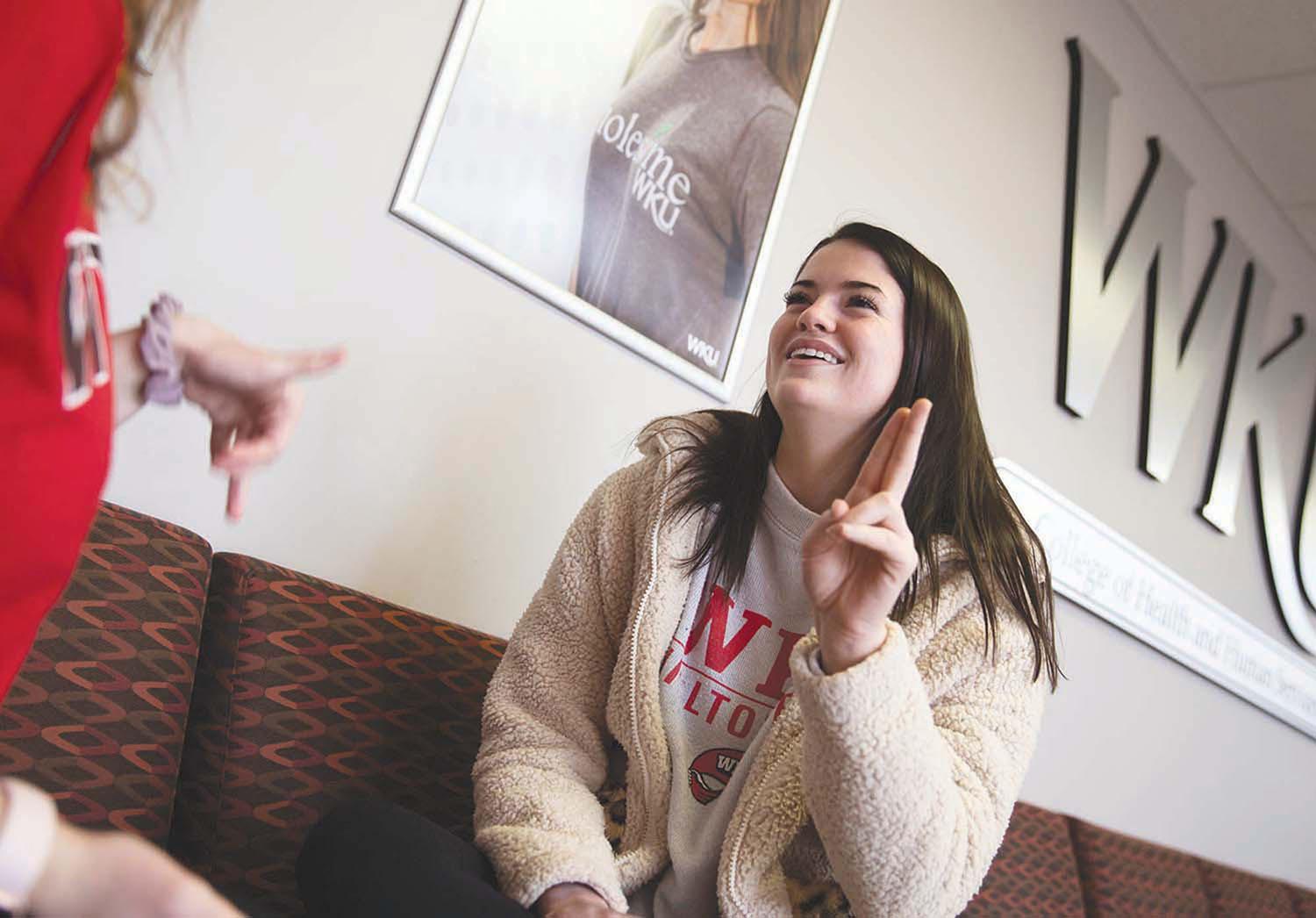 Owensboro sophomore Mazie Coomes practices American Sign Language with her lab partner, Owensboro sophomore Hannah Kate Divine (left), on a Friday afternoon in the Academic Complex. Coomes is seeking a major in communication disorders with a minor in American Sign Language. Note: Divine has a romantic relationship with photographer Addison LeBoutillier. She and Coomes had planned on practicing on this day in this location. When they practice, they usually meet at the Academic Complex or in their dorm rooms.

He said the initial transition from verbal communication to only signing is a lot to handle at first, but he caught on quickly after learning to sign the alphabet, or fingerspell.

“ASL is really cool because fingerspelling is a thing that you can use to say anything you want to even if you don’t know any sign at all,” Linton said. “If you know the alphabet, you can say whatever you need to say. It may not be grammatically correct or it may take a long time, but it’s still available.”

Linton said that Boyd has been a comforting resource throughout his time in the ASL minor. From Boyd and other ASL professors, he has learned how to appropriately write and speak of those who are deaf or in the Deaf community.

In their textbook, Moore and Levitan also mention the difference between the medical and ethnic definitions of the term. In the medical world, it is common to see being deaf associated with having a disability or being handicapped, whereas the ethnic view qualifies the Deaf culture as just that: a culture.

Moore and Levitan write that although a small part of the Deaf community agrees with the medical point of view, most see being deaf as a way of life and find the terms “disabled” or “handicapped” extremely offensive.

“The fact that being deaf is still qualified as a disability is a sore spot,” Linton said. “They don’t think that it limits them in any way. They can participate in every aspect of life like hearing people do.” 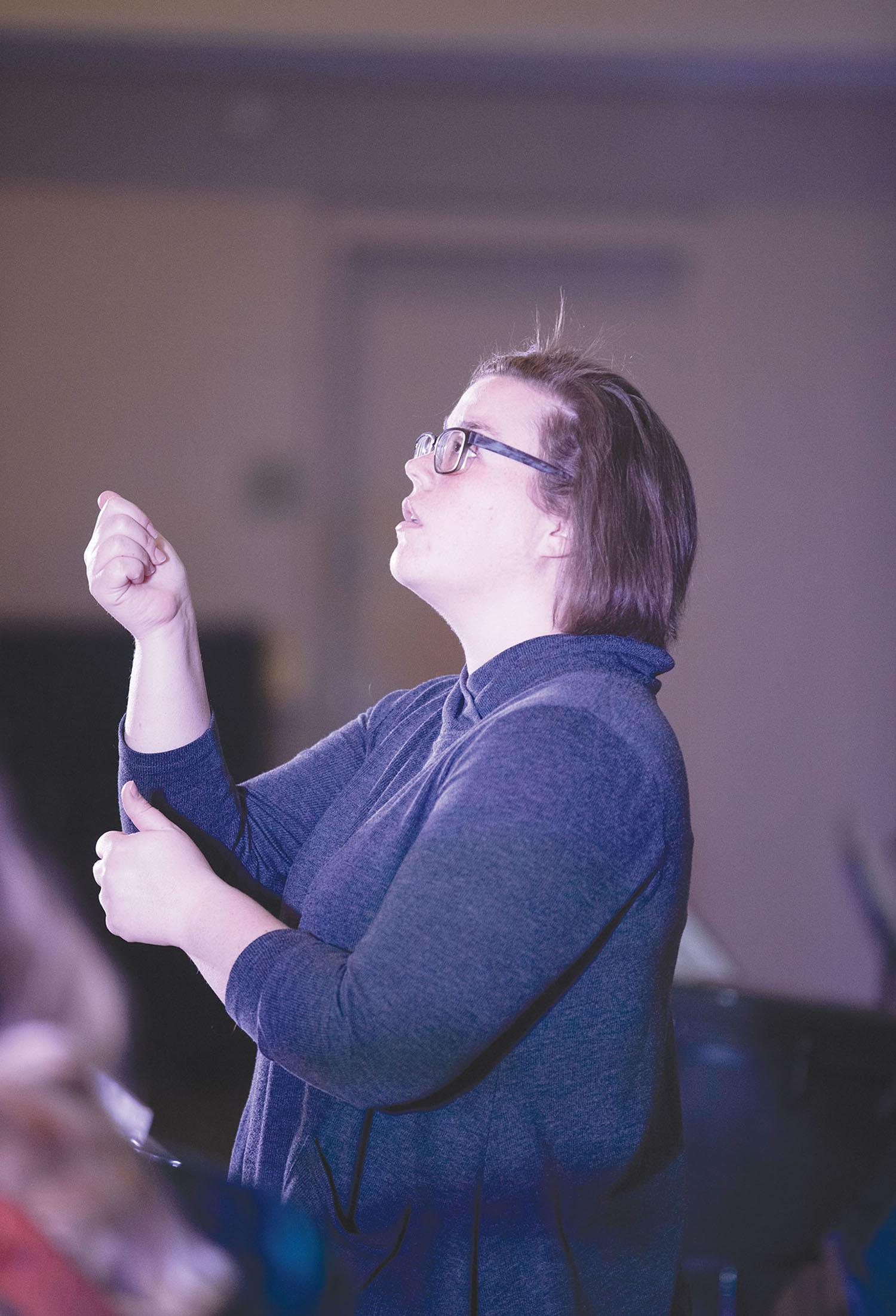 Tara Jones signs during a Sunday service at Gospel Community Church. Jones is one of several interpreters who are members with the church. She also teaches for the Daviess County Public Schools district working with the Deaf and hard of hearing population within the county and surrounding area.

Boyd supports what Linton says about deaf people being just as successful as hearing people by mentioning many workers who are deaf in the community. He has seen doctors, lawyers, policemen, and pilots of planes who are deaf and successful in their fields. One example he gave was Nyle DiMarco who is a deaf singer, actor and model. DiMarco was also the first deaf winner of America’s Next Top Model and the first deaf winner and second deaf contestant on Dancing with the Stars.

Linton makes an effort to sign with everyone, especially people he sees using ASL in public. He said every public interaction he has had with someone who is deaf results in them being both shocked and elated at the opportunity to communicate in their language. His first interaction happened while at a restaurant when he noticed two women bussing tables while communicating with each other in ASL. At the time, he was only in his second ASL class and was nervous because he was not completely well versed in the language yet.

“I ended up just getting their attention, and they were super friendly and just so excited that I knew the language and was trying to learn the language,” Linton said.

Hinton has similar experiences with the Deaf community and their initial shock of inclusivity in the church. He said after his first meeting, a man who was deaf stopped Hinton halfway through the sermon and proclaimed his coming to faith along with his gratitude for finally having accommodations to his specific needs. After the service was over, the same man approached a blind woman who was sitting in one of the front pews in the church and began to tactile sign, or use touch to communicate with someone who is unable to hear and see, the sermon he had just witnessed in her hands, bringing her to tears.

“They have never had full access to the gospel,” Hinton said.

Linton and Hinton’s firsthand accounts of seeing what their communication knowledge has sparked in the Deaf Community stands for what Boyd strives to instill in all of his students.

“My motto is ‘deaf can do anything, anything except for hear,’” Boyd said.