From the magazine: #nofilter

Haley Wheeler’s most successful Instagram post was a photo of her on her 21st birthday — an important day in anyone’s life, she said. The post received 2,384 likes.

To Wheeler, however, her most successful post is of her in a bikini.

Wheeler had her first run-in with an eating disorder at eight years old.

“As somebody who’s dealt with an eating disorder in the past, me being able to be wholly confident and happy and to actually feel sexy for the one time in my life was incredible,” she said.

The most important moments in people’s lives tend to get the most likes and make for the most successful posts, said Wheeler, a Clay City senior who has 20,000 followers on Instagram under her handle @haleybwheeler.

Social media platforms like Instagram allow people to stay in touch with greater frequency across a greater distance, said Sam Ford, co-author of the book, “Spreadable Media: Creating Value and Meaning in a Networked Culture,” which challenges some of the definitions used to describe contemporary media today.

“The drive to want to connect with other humans about things we’re interested in and stay in touch is not new,” Ford said. “Technology didn’t create that. The platforms that have become popular have done so because they facilitated what people want to do.”

Ford said a social media influencer is somebody who has a following and makes money from the content they produce. 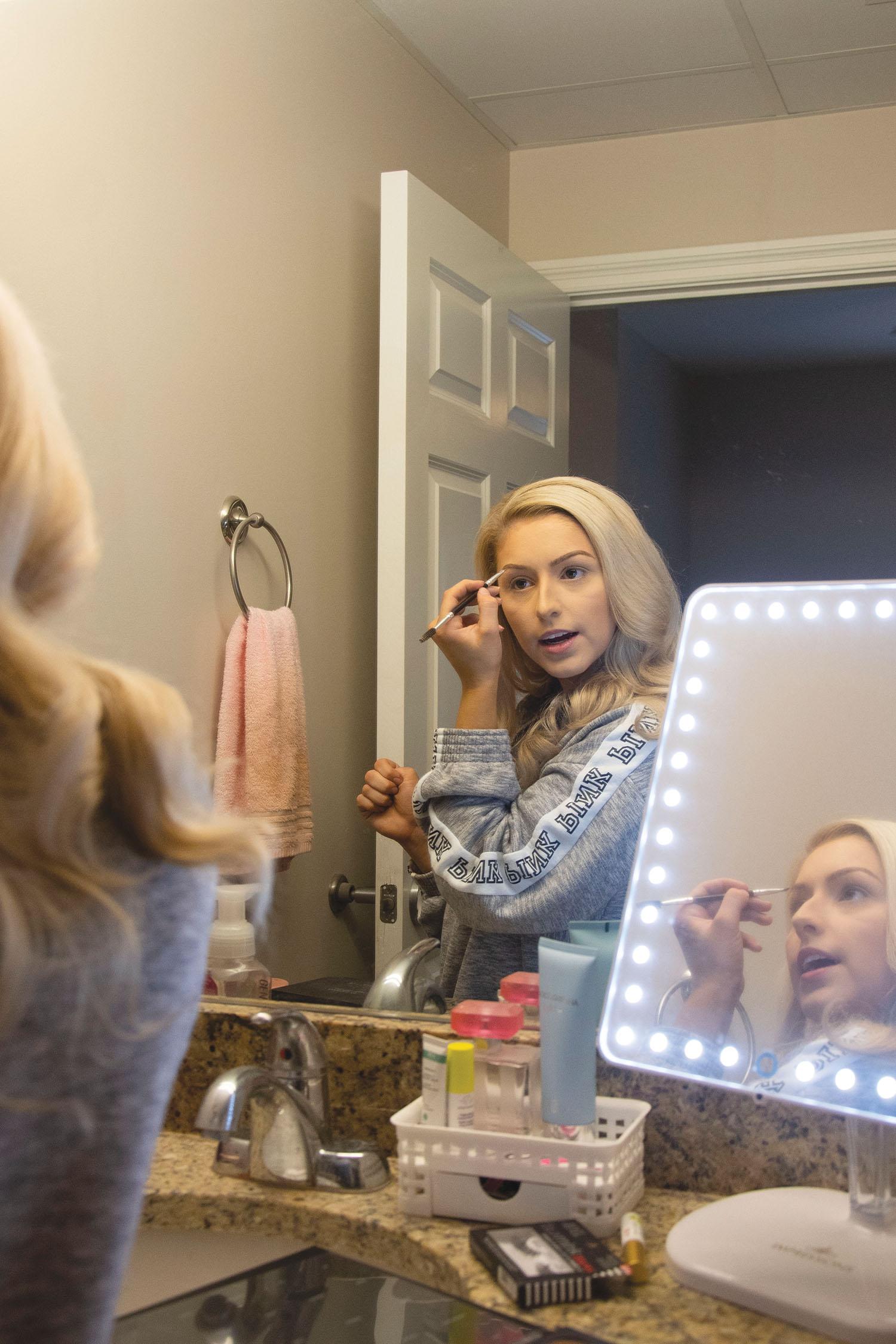 Wheeler has built an Instagram following of 20,000 followers in the past few years. Wheeler often posts photos of herself participating in beauty pageants and working out. (Photo by Grace Alexieff)

“I took to social media very well because I saw it as a platform to spread positivity and influence people to do the right thing,” she said.

Since overcoming certain challenges like eating disorders in her own life, she aims to use social media as a vehicle to reach out to her followers who might be going through the same thing.

“It really took a toll on my self-esteem and my ability to see myself in a positive way,” Wheeler said.

Through social media, Wheeler said she was able to find people who encouraged and proved to her she was making an impact.

Wheeler once received a direct message from a high school girl who turned to an eating disorder after being made fun of about her weight. The follower told Wheeler she helped her realize her worth wasn’t defined by her weight, Wheeler said.

She appreciates knowing there are people who want to know what she has to say and value not only her opinions but also her as a person.

“Sometimes I don’t always see the value in myself, but having this presence on social media is a way for me to get my own reality check,” Wheeler said.

Wheeler said she seeks to use her platform to aid people in appreciating their inner selves, focusing largely on positivity and self care in her posts.

Going back to her first posts in 2012 of smiling selfies and heavy filters, Wheeler said she got picked on constantly and “felt like crap.”

Wheeler said people should not search for their value in what people think on social media. She said realizing people loved her at any size completely changed her mindset on Instagram.

Wheeler said it only takes one person to care to make an impact. “And, as an influencer, it’s really cool to have that opportunity to be that person who cares in somebody’s life.”

Wheeler said she thinks of herself as being a “billboard.” Her reach on Instagram began when people asked her where she bought her clothing. She began tagging clothing brands she wore in posts. Adorabelles Boutique in Richmond eventually reached out to her and said they loved her personality and style.

Ford said an influencer is “a word of mouth advertiser” either making money off their own content or selling somebody else’s product.

Wheeler became a brand ambassador for Adorabelles Boutique just before the start of her freshman year of college and got a free product each month in exchange for posting about the brand’s products.

Wheeler’s hometown, Clay City, is in Eastern Kentucky and has a population of 1,102 people as of 2017, according to the U.S. Census Bureau. There’s a McDonald’s, a Dairy Queen, one high school and one middle school.

Wheeler said although she grew up in such a close-knit community, people used their ties to betray each other . She said that’s the one bad thing about small towns — everybody knows everybody, which she compares to social media, where everyone wants to know what everyone is doing.

She now promotes small businesses like Essence Cosmetics and Simply Dresses instead of taking brand deals from large companies but does not make any money from the endorsements. She only receives free products. She said she focuses on local businesses because Kentucky is a small-business state.

She said she wanted to “be something more than a girl from a small town.”

Steel Mill & Co. is a clothing and gift boutique in Bowling Green that uses social media influencers and brand ambassadors to promote their brand. The company uses Instagram and Facebook every day as the “biggest platform for growth,” said Steel Mill & Co. marketing manager Paige Calvert.

Steel Mill creates their social media posts surrounding the image of the “Steel Mill babe,” which is based on Chandler Rogers, the owner of the company, Calvert said. Rogers opened Steel Mill at the age of 23 after she took out a $50,000 loan. Calvert described Rogers as confident, daring, authentic and uplifting, which are characteristics they look for when selecting a Steel Mill influencer or brand ambassador.

“We love reaching out and making more girls who may not just work for the company feel like a Steel Mill girl too,” Calvert said. 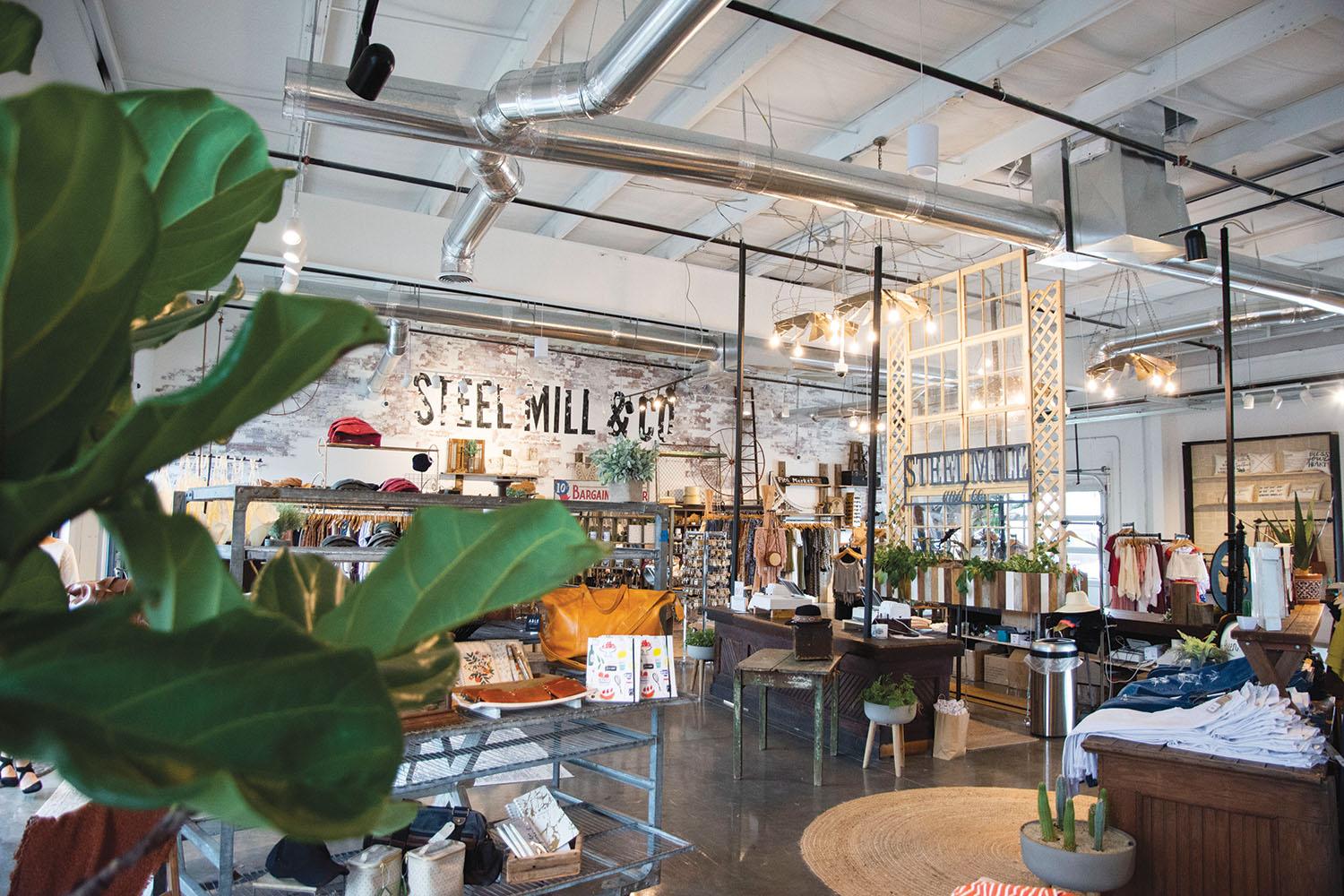 Steel Mill and Co. is a women’s clothing and home decor store located on the U.S. 31 W Bypass in Bowling Green. The boutique uses social media influencers and brand ambassadors to promote their brand. (Photo by Chris Kohley)

“If you’re constantly putting content out there on Instagram, then you’ll see the return in it,” Calvert said.

Calvert said another factor businesses have to consider is the quality of the content and how visually appealing the posts are, since that creates more engagement as well. However, Calvert said it’s difficult for businesses to generate content like that consistently because it requires lots of time and multiple photo shoots.

Steel Mill invites the brand ambassadors to events at the store, like meet and greets with the owner, and gives them discounts as perks for representing the company. The influencers pick out free outfits from the store to promote on their Instagram accounts.

Steel Mill has had Instagram and Facebook accounts since the business opened three years ago, Calvert said. Their number of followers has grown from 4,000 to over 28,000 on Facebook and increased from 4,000 to 11,000 on Instagram.

“Instagram has been very difficult for us to grow our followers,” Calvert said. “We did find a much slower growth than we did with Facebook.”

This slow growth on Instagram is due to the constantly tweaked algorithm, Calvert said. A post is shown to a percentage of followers, and if they do not like and engage with the post enough, the post stops being shown on their feeds.

This algorithm can work against businesses. Users often think of business posts showing up as “an interruption” on their Instagram feeds, Calvert said.

Steel Mill combats this by posting content that allows them to tell their own story, much like most users on the platform do, Calvert said. Their posts include portraits, detail photos of clothing and group pictures. Calvert said they also try to post inspirational content to engage with their followers. They analyze engagement on each post to gauge what kinds of content the consumers like the most to affect future posts.

This analysis has worked well for Steel Mill.