A Talisman photographer spent her Thanksgiving break with other students on an Outdoor Recreation Activity Center-organized trip to the Grand Canyon. The following pages contain her journal entry-style reflections from the journey.

At 4:45 a.m., a feeling of nervous excitement lingered in our group’s packed 12-passenger van as it began to make its way down I-40 West toward Grand Canyon National Park. It was Saturday, Nov. 21, and we had a 30-hour car ride ahead of us. We were all strangers, but we had one commonality.

After nearly 12 hours of driving, our crew arrived at Red Rock Canyon State Park in Hinton, Oklahoma. We pitched our tents and prepared ourselves for a night of freezing temperatures.

As we climbed in our frigid tents and finally began to lie down and rest, a pack of coyotes began to howl under the bright moonlight.

We slept until seven the next morning, waking up to the shouts of Leah Rossettie, our ORAC leader.

Everyone emerged from their tents to pack up the gear.

We watched green hills roll into a flat, desolate wasteland, leaving only distant mountains to rise above the horizon.

When we reached the Grand Canyon, the scenery flattened and the mountains completely disappeared.

A backseat passenger shouted, “Is that it?” 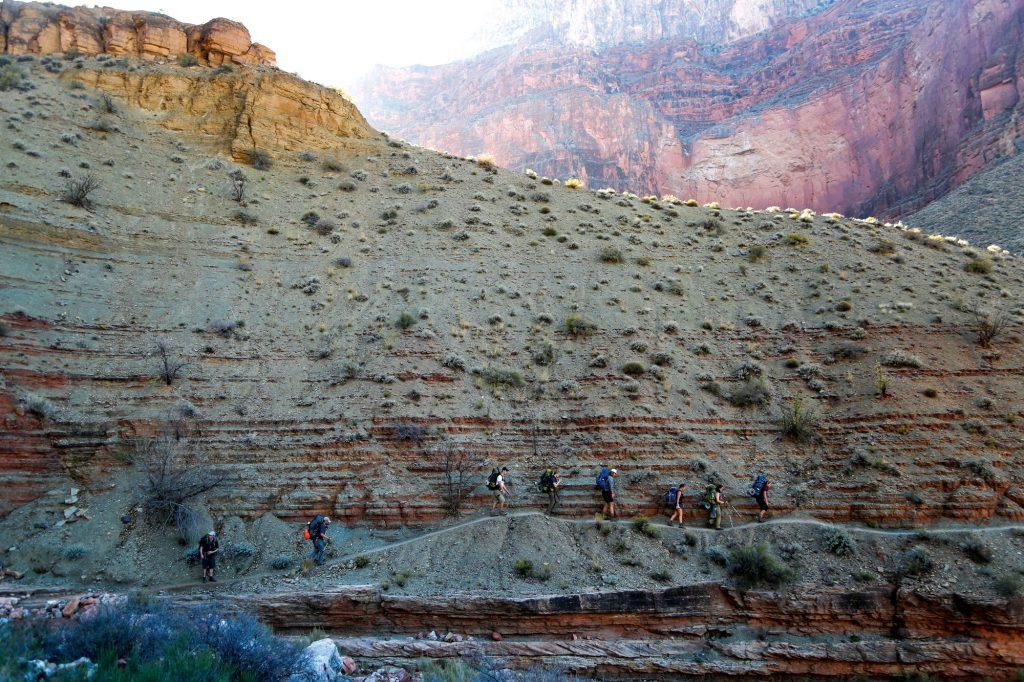 The crew completes the final mile of day one’s hike into Hermit Creek campsite on Nov. 24. The long hike of nearly 10 miles took the crew almost seven hours to complete. 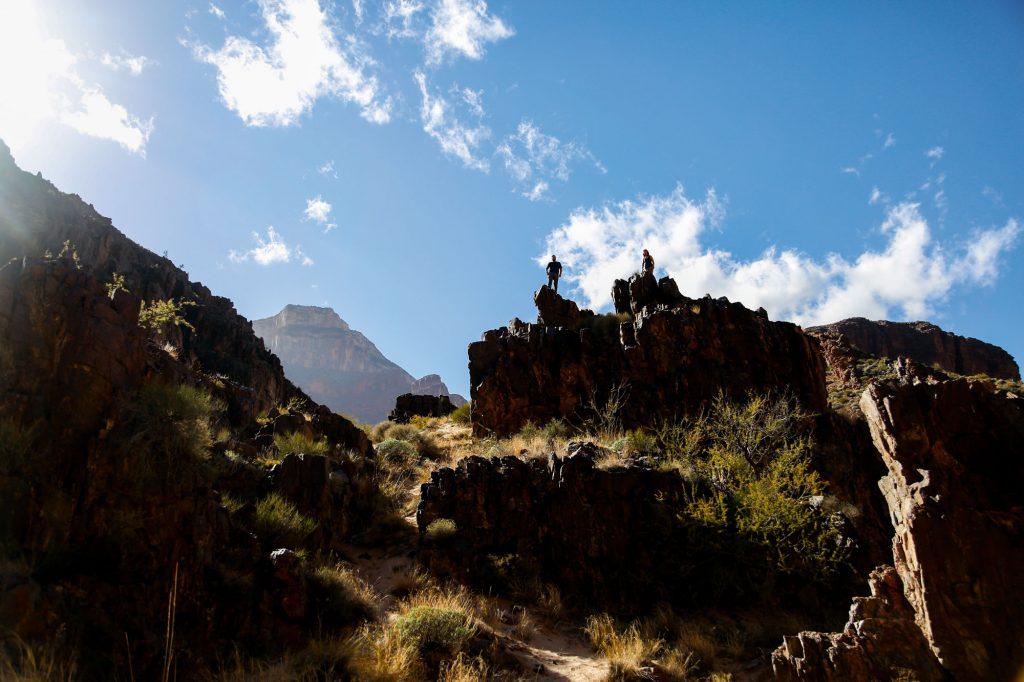 Bowling Green freshman Kerrick Moore and Herod, Illinois, junior Chloe Carr explore the rocks at the bottom of the Grand Canyon near the Colorado River on Nov. 26. The oldest rocks in the canyon are said to be nearly 2 billion years old.

About six million years ago, erosion began carving the Colorado River through hundreds of miles of the Grand Canyon’s rock and sediment.  The natural formation’s mile-high walls sunk 6,000 feet below the canyon’s rim.

At the Desert Watchtower on the canyon’s South Rim, everyone gawked in amazement at the size of the formation.

We had one final night before the next morning’s descent. We packed and unpacked our bags in a systematic order to rethink necessities. Selections were carefully made to prepare for the next four days’ hike before we cooked dinner and went to bed.

At 6:45 a.m., the van pulled out of the campsite. The first stop was an overlook where everyone paused to stare at the deep canyon we were about to descend.

Silence set in as the sun finally peeked over the horizon and spilled through the windows of our van. This would be the start of a long day. 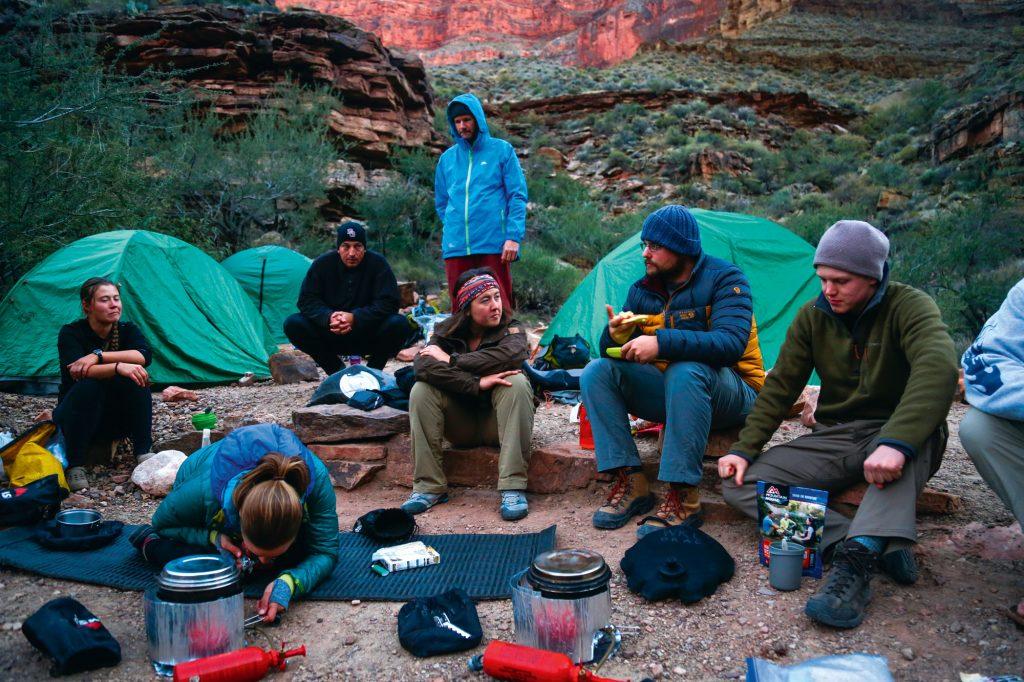 Leah Rossettie, the trip’s leader, lights up a stove for dinner at the Hermit Creek campsite on Nov. 24. Hot dinners on the trail, such as freeze-dried food, often required only boiling water to prepare.

Excitement, laughter and the sounds of boots crunching broken rocks accompanied us down Hermit Creek Trail into the Grand Canyon.

Over the next nine hours, miles seemed to crawl by before we finally arrived at the campground and lowered our packs to the ground.

Feet were swollen. Muscles were cramping. Knees were aching as campsites were finally set up for the night. Hermit Creek Camp gave us water to quench our thirst and rinse our bodies.

That night, the stars shone brighter than I had ever seen. The moon’s light lit up the canyon walls almost as bright as the day’s sun. The constant sound of running water lulled everyone into a deep slumber.

The next morning was slow as stiff muscles awoke one by one. The crew brewed coffee and munched on a late breakfast as they decided when to head out for the day. A chance of rain was expected, and clouds began to converge in a graying sky.

A few hours later, we made our way to the next campsite. The next two nights were spent in a patch of underbrush shielding the crew from strong winds brought by clouds.

Immediately, exploration began. Crew members wandered out to discover their surroundings. After some searching and climbing, four members of the crew perched themselves on a piece of canyon wall carved by flowing water.

The next morning was Thanksgiving and the day our crew would finally touch the bottom of the canyon. The mile hike to the river’s beach was an easy one.

The Colorado River stretched before us. Freezing water ran over our toes. We finally made it. 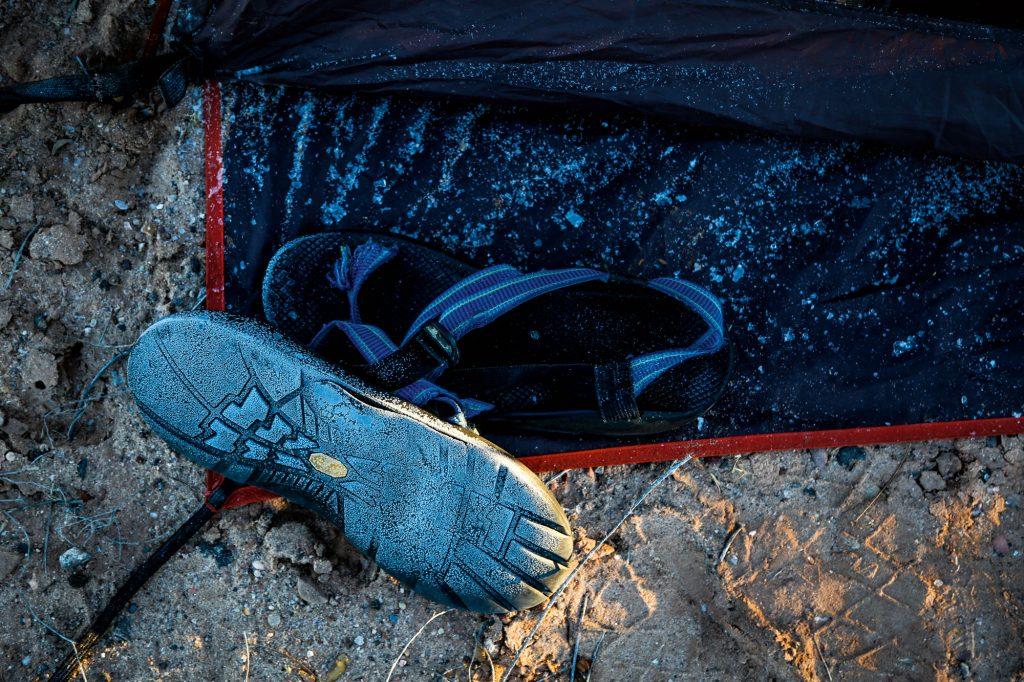 Frozen sandals lay on the ground at Homolovi State Park in Winslow, Arizona, on Nov. 23. The crew woke up at sunrise to a frost-covered desert in order to complete their final hours on the road before reaching Grand Canyon National Park.

Canyon walls towered over us. I silently questioned whether they were even possible to climb.

When everyone arrived back at camp, we devoured a Thanksgiving feast unlike any other. We shared trail meals and snacks as if everyone was family, and the stories of our adventures brought smiles to our faces. The climax of our journey was here.

In the absolute silence of that night, I slept easily. 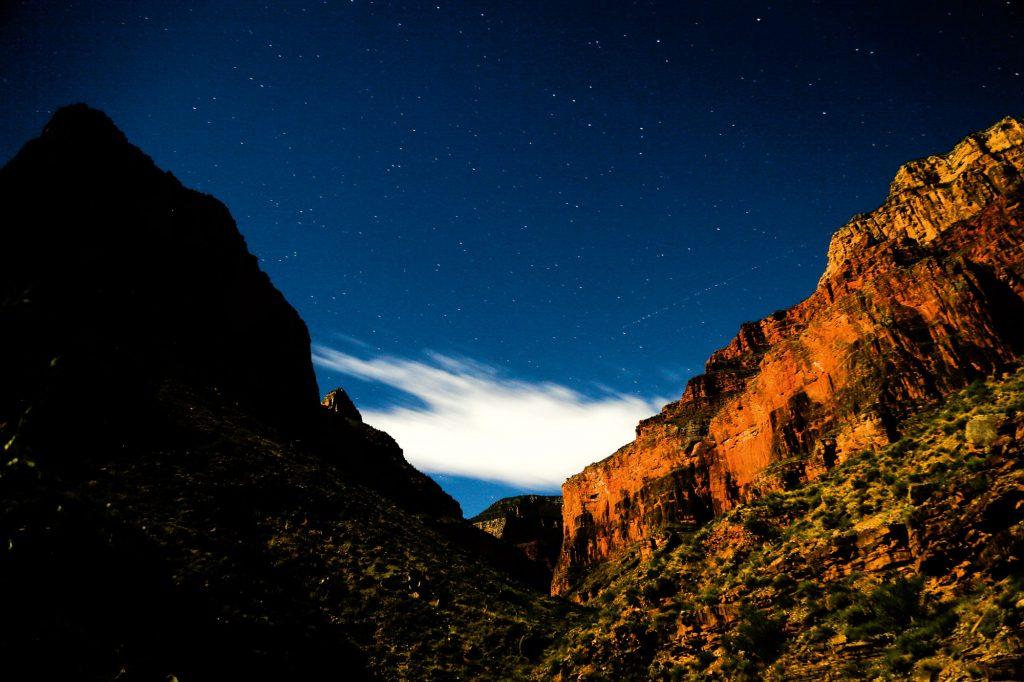 Moonlight illuminates the rim of the Grand Canyon at Hermit Creek campsite on Nov. 24. Students traveling with WKU’s Outdoor Recreation and Adventure Center hiked nearly 10 miles into the canyon before stopping to set up tents. The group wanted to rest for the night before hiking 3 miles to a new campsite the next morning.

For the final time, we emerged from our tents and packed our gear.

At 3:45 a.m., we started our journey back. We staggered up the canyon walls like zombies in the dark.

Three hours passed before the sun rose. We watched as the sky turned deep purple, then bright orange, and then, finally, pastel blue. It was a peaceful morning.

The final mile-and-a-half proved to be the hardest climb. As we approached the rim, a light snowfall began to coat the canyon.

We met the top with cheers of joy.

It was time to make the journey home.