As the last inklings of sunlight faded away on Friday, Oct. 18, Octagon Hall came into view, its brick exterior reflecting nothing but the shadows of a cold night, even moonlight seemingly afraid of what lies within the hall.

“It’s very well known in the paranormal community — it’s quite famous,” said Debbie Shapiro, docent and paranormal adviser of the hall with over 40 years of experience investigating the paranormal.

Octagon Hall is a Civil War museum in Franklin that was built in 1859 by Andrew Jackson Caldwell, a pro-Confederate States of America man, as his home and plantation, according to the museum website.

Shapiro said the building has become a well-known hotspot for paranormal activity, and over 350 paranormal research teams have investigated the property.

The volunteers at the hall organize novice ghost hunts that take place on Friday and Saturday from 7 p.m. to 1 a.m. in October to give everyday people the opportunity to experience the paranormal for $50, Shapiro said.

Inside Octagon Hall, Shapiro greeted guests from within a room filled with 19th-century relics and antiques, including a Confederate flag draped over the wall behind her. She explained how the night would begin before any paranormal activity was to be expected. 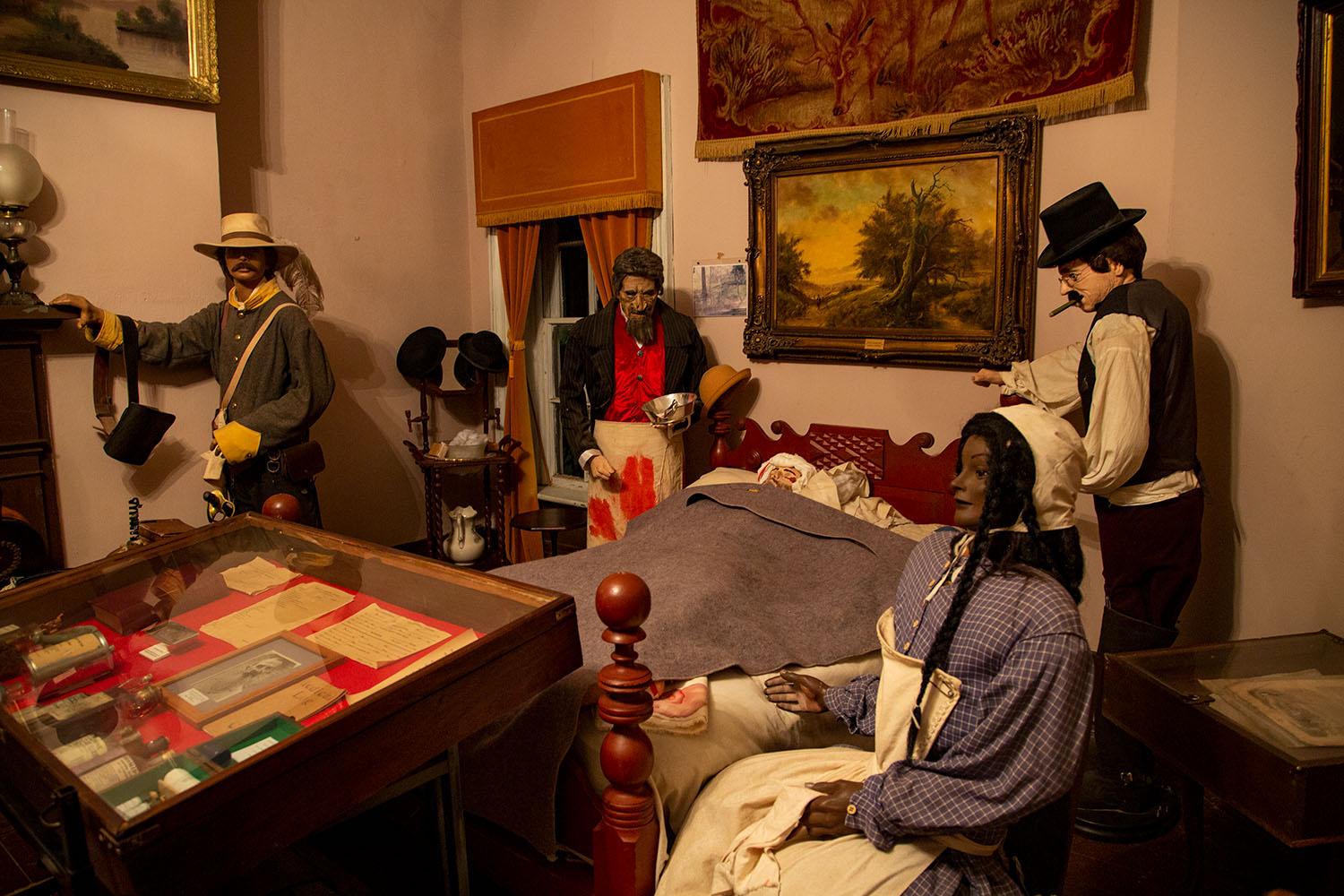 Octagon Hall, a Civil War museum built in 1859, is well known in the paranormal community. Human-sized dolls are dressed and posed in 19th century clothing, surrounded by original historic items from the hall.

“We give everybody the ins and outs, the do’s and don’ts of ghost hunting,” Shapiro said. “We let the house get used to us.”

Early arriving hunters were allowed to explore the home, which is two stories tall with a basement and closed-off tunnel system underneath.

Human-sized dolls dressed in period attire are posed throughout the hall on and beside historic items such as century-old furniture and weapons recovered from Civil War soldiers.

Yesenia Bush, another docent at the museum, sat outside before the hunt began, a cigarette in hand as she looked out over the dimly-lit road that leads to the hall. She recalled an experience in the building, which she said could only be the result of paranormal happenings.

She said she was cleaning in the hall’s former hospital room when the feeling started and assumed it was a nosebleed, so she tilted her head back to prevent blood from dripping. This caused the choking feeling to intensify and become unbearable, Bush said.

“I didn’t care if I got blood everywhere,” she said. “I threw my head forward and nothing came out.” 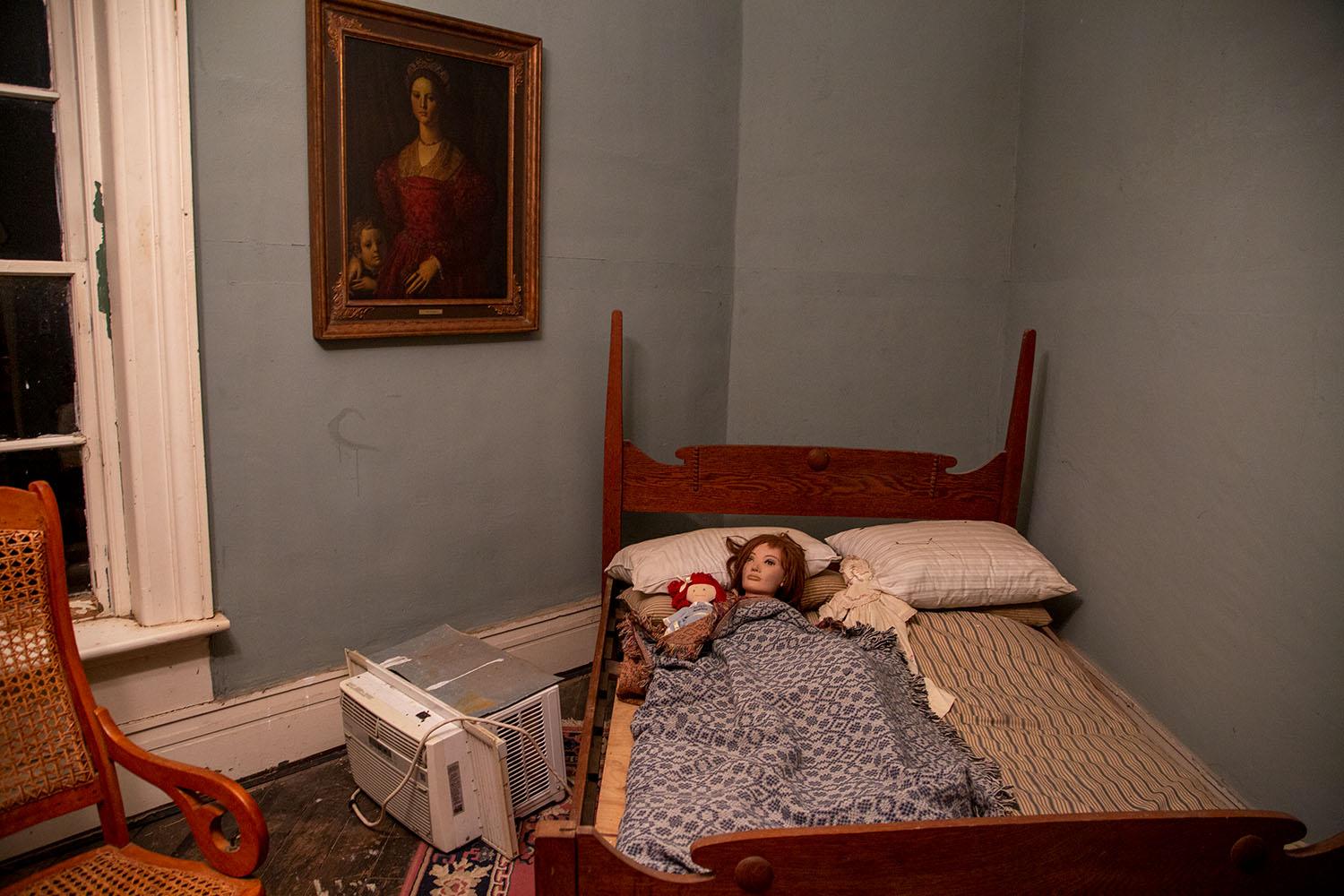 Volunteers organize tours every Friday and Saturday in October, walking spectators through the experience of ghost hunting. Octagon Hall is a two-story building. On the second floor, there are three bedrooms filled with life-size dolls.

Bush said she was confused by the absence of blood and moved to a mirror in the room where she opened her mouth to check, only to find nothing unusual, and the feeling then disappeared.

She said when she began volunteering at the hall she was not a fully-fledged skeptic, but her experiences there convinced her beyond a doubt of the existence of spirits.

“I was here for about a month, and I had to question everything,” Bush said. “This house showed me things that made me understand that I did not understand everything about the universe.”

When the hunt began, around 15 ghost hunters convened in the room Shapiro had been greeting from. There was a dining table in the center with chairs filling the space up to the antique-laden walls.

Billy Sims, a paranormal investigator with NightStalkers Paranormal Research, and Shapiro gave directions and warnings about engaging with the spirits that reside in the hall.

“This place is no joke — it can stick with you — it can follow you home,” Sims said.

The majority of the first session of ghost hunting consisted of sitting in the pitch-black room while Shapiro, Sims, Bush and another experienced ghost hunter asked the spirits in the hall various questions. They used a digital recorder to document each series of questions and listened back for responses. No responses were captured from this portion. 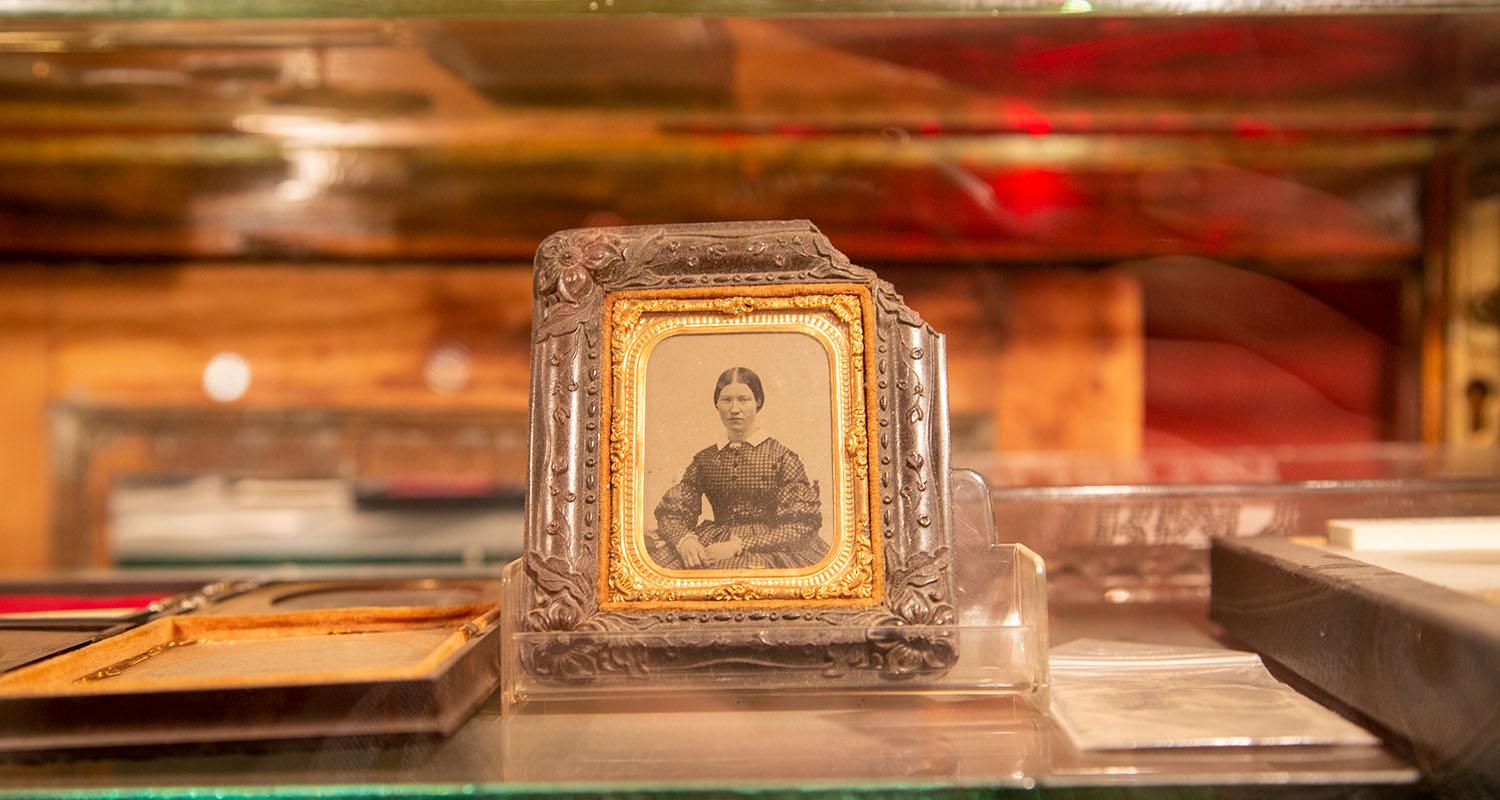 Ghost hunts are usually ran by Debbie Shapiro, who has been a paranormal advisor at the hall for 40 years. Octagon Hall has been investigated by over 350 paranormal research teams.

At the end of the first session, Sims began to use a device called an SB7 Spirit Box. He said the box switches through AM/FM radio stations at a rapid pace to allow spirits to be heard speaking.

“It’s sweeping so fast that if you hear more than one word or one syllable, that’s not a radio station,” Sims said.

This segment of the session produced several audible responses which Shapiro said came from ghosts in the hall.

At one point during the questioning, she asked: “How many spirits are in the room with us right now?” Moments later, a voice came through answering “seven” before seemingly changing its answer to “eight” almost immediately.

Shapiro then thanked what she said was a ghost for its response, and the same voice clearly replied: “You’re welcome.”

Once this session ended, the group of novice ghost hunters were split in two — one group headed upstairs in the hall, while the other exited to the cemeteries behind the home. 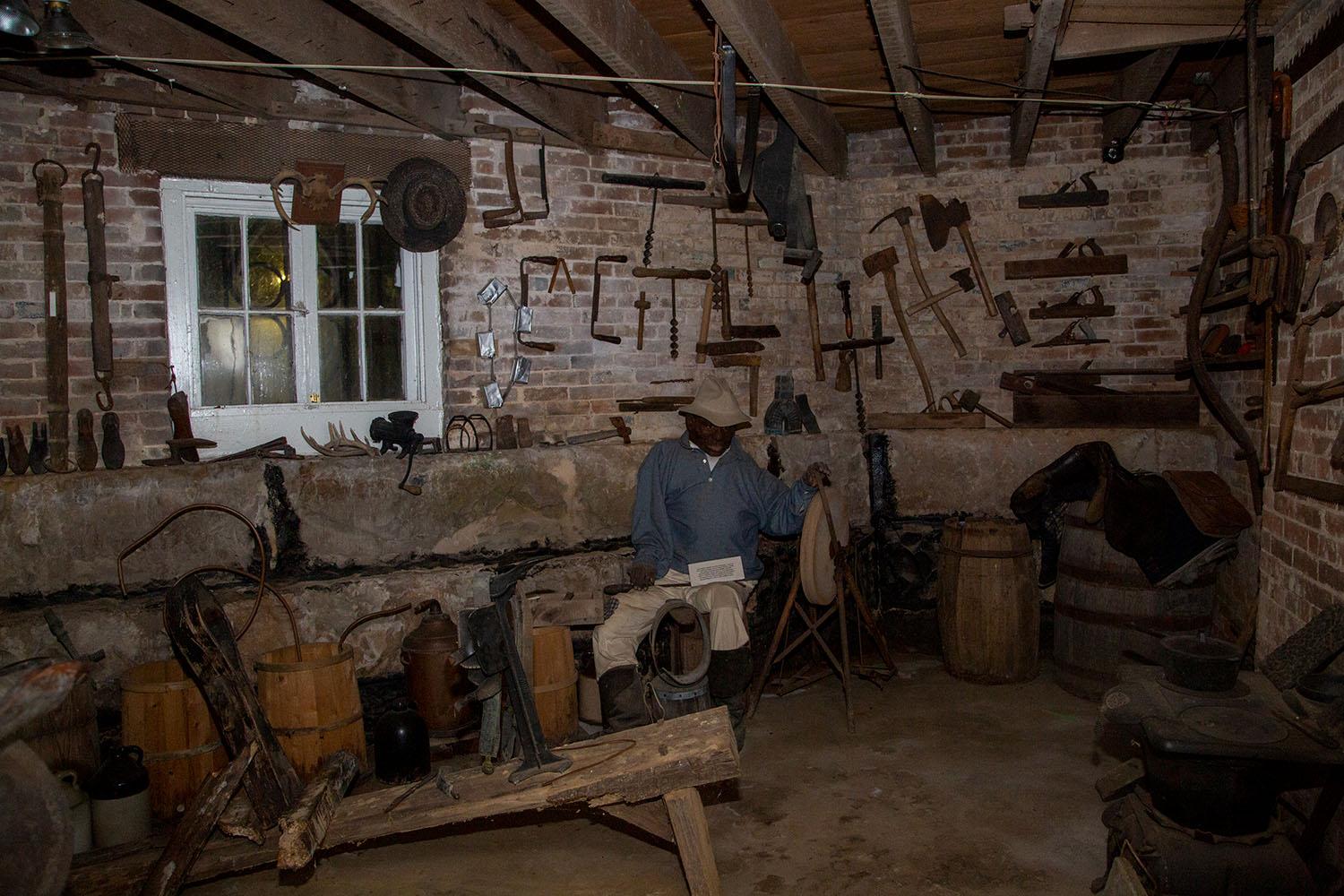 The basement holds mannequins that represent the slaves who lived in the hall during the Civil War. The Caldwell family, who built Octagon Hall, were pro-Confederate States of America and owned slaves from the plantation’s completion in 1859 until slavery was abolished in 1865.

The Caldwell Family Cemetery is a small stone wall surrounding the gravestones of Andrew Caldwell’s wife and daughter, who died in the home at age 7, Shapiro said.

“There are mass graves of soldiers on the property as well,” she said. “There’s so much death that has happened here.”

Sims led the cemetery group down a path of flattened brush through a small thickly-wooded patch until he stopped at a clearing with small stones jutting from the ground haphazardly.

These stones, he said, are gravemarkers for the slaves who died working at this plantation. He said this tucked-away clearing, several dozen yards from the house, is the slave cemetery.

The cemeteries, while ominous as homes of the dead, gave no signs of paranormal activity, though Sims said they are usually hotspots.

Shapiro said Octagon Hall’s paranormal activity levels can be hit or miss depending on the mood of the spirits. However, Sims said there’s one surefire way to get at least a sample of the paranormal presence at the hall.

“Just listen to the house,” he said. “She will speak to you at some point — I promise you.” 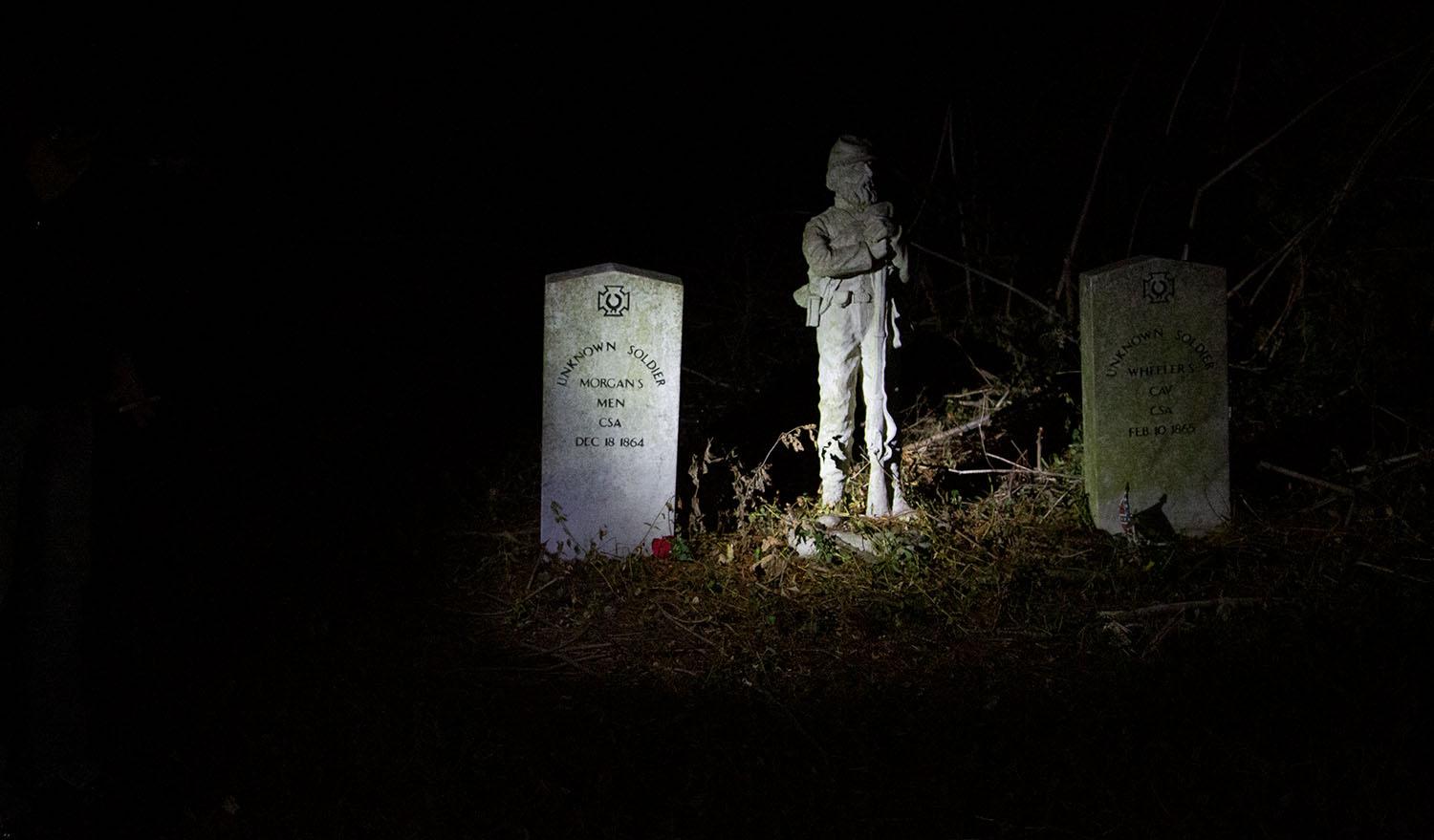 Behind Octagon Hall lies a cemetery, home to the graves of both soldiers and slaves. The Caldwell family is also buried in the cemetery. Across from these headstones are small rocks scattered across the grass, which represent the graves of the slaves who died working on the plantation.