The best lies from the 2016 election, as told by PolitiFact

Two PolitiFact editors, Amy Hollyfield and Katie Sanders, stood before an audience of students, faculty, staff and community members Tuesday evening in the Mass Media and Technology Hall auditorium. They spoke about the creation of their organization and their findings from the 2016 election.

Hollyfield and Sanders said PolitiFact was created in 2007 as a way to cover the 2008 presidential election differently. They wanted to be able to measure when politicians made statements that were inaccurate or misleading.

“We got into this to bring truth to the voters,” Hollyfield said.

Since then, PolitiFact has become known for taking statements from politicians, researching them and giving them a truthfulness rating on a six-point scale. This ranges from “absolutely true” to “pants on fire,” an all out lie. 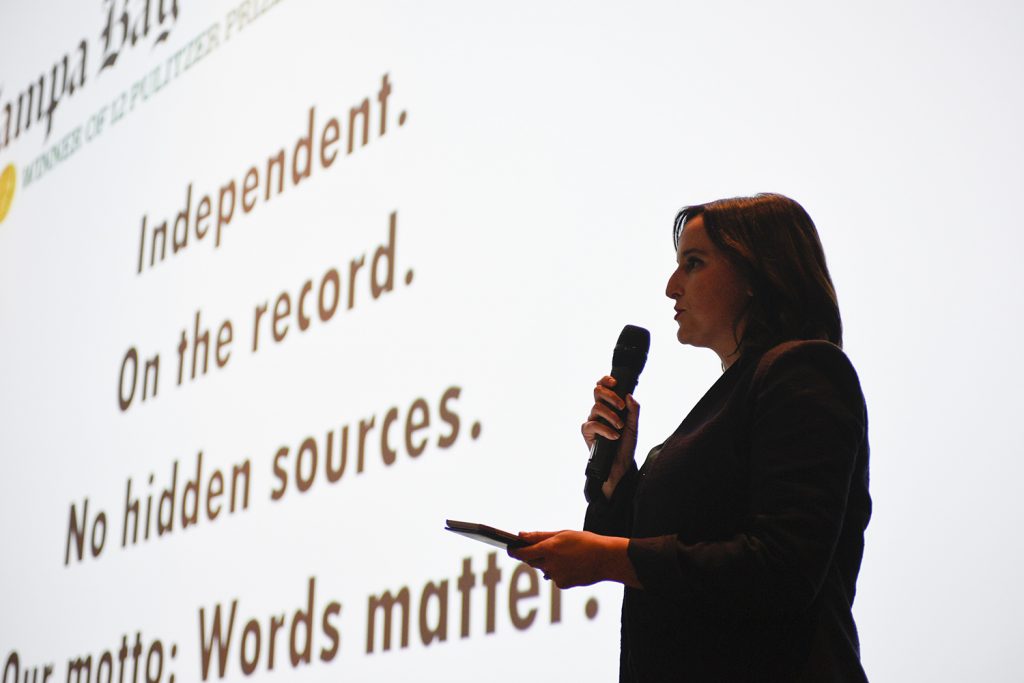 After nine years, the organization has fact-checked three presidential elections and over 13,000 statements.

PolitiFact deemed the 2016 election the “pants on fire” election because of the abundance of fiction that was espoused. During the entire cycle, PolitiFact checked 313 statements from Donald Trump, of which 70% received a “mostly false,” “false” or “pants on fire” rating.

PolitiFact checked 196 Hillary Clinton statements, with 26% of hers falling in this range.

The lies did not stop there. Trump received 53 “pants on fire” ratings, the most PolitiFact has awarded to one politician since it began. He even won PolitiFact’s lie of the year award in 2015 for his many campaign misstatements.

On the other hand, Clinton only received five “pants on fire” ratings, mostly relating to her email scandal.

The presidential election may be over, but Politifact isn’t out of work. Once Trump is sworn into office, PolitiFact will unveil its Trump-O-Meter. This will track the action and success of Trump’s campaign promises during his time in office.

But until that launches, here are some of the best lies from the 2016 presidential election for you to enjoy, courtesy of PolitiFact. The following all received “pants on fire” or “false” ratings.

1. Donald Trump said “that at a campaign rally President Barack Obama ‘spent so much time screaming at a protester, and frankly it was a disgrace.'”

2. Marco Rubio said, “‘Not even Tim Kaine is willing’ to say he trusts Hillary Clinton.”

5. Donald Trump said, “‘I finished’ the controversy about where President Barack Obama was born.”

6. Hillary Clinton said, “I am the only candidate who ran in either the Democratic or the Republican primary who said from the very beginning (that) I will not raise taxes on the middle class.”

7. Bernie Sanders said, “Not one Republican has the guts to recognize that climate change is real.”

8. Donald Trump said, “As usual, Hillary & the Dems are trying to rig the debates so 2 are up against major NFL games.”

9. Hillary Clinton said, “regarding the presence of classified information in her email, FBI Director James ‘Comey said my answers were truthful, and what I’ve said is consistent with what I have told the American people.'”

12. Ben Carson said, “The Family Research Council, according to some government agencies, is a terrorist group.” Fun Fact: Of all the statements Politifact fact checked from Ben Carson, zero received true ratings.