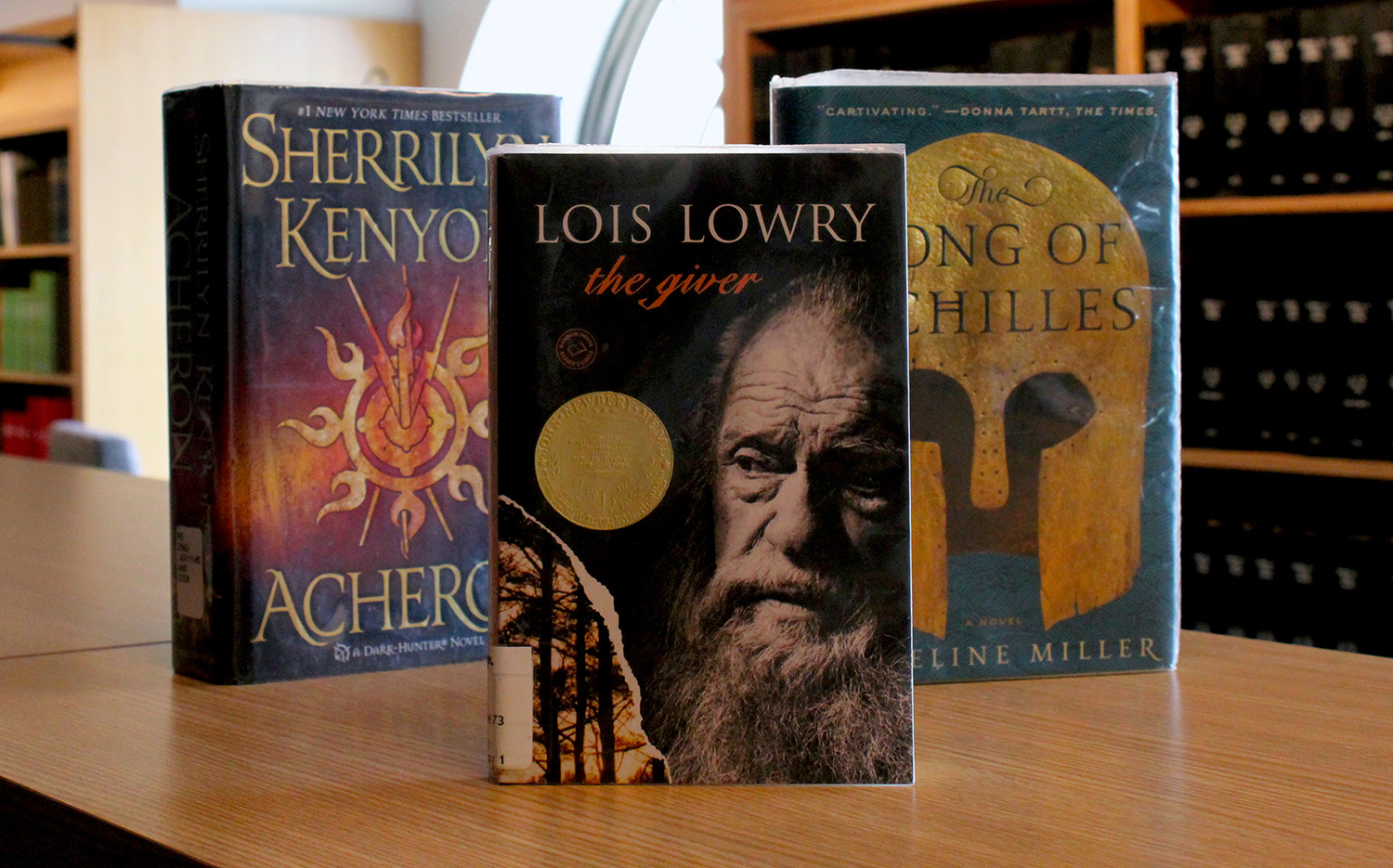 A few of the library staff's favorite books are "The Giver," "The Song of Achilles" and "Acheron." (Photos by Rachel Hertel)

As the weather gets cooler and you settle into your new routine, you may want to find some free time to get cozy with a book. The Talisman asked the library staff at WKU for some of their favorite books available at the Raymond Cravens Library to help you pick your next read.

“The Giver” by Lois Lowry

Alley Sircy, an access services library assistant, recommended “The Giver”, which takes place in a dystopian society, where everything you do in life is assigned to you, such as jobs, spouses and children.“Human factors are gone just for the betterment of society, and I find that’s a very interesting look at different perspectives,” Sircy said.

In this novel, Jonas, the protagonist, gets assigned to be the Keeper of Memories, where he stops taking medication and starts to feel things again, such as regaining his five senses. He is trained by the old Keeper of Memories, and it becomes a struggle for him to live with all these new feelings, Sircy said.

College students can get overwhelmed with schedules, classes and jobs, and this book shows how great freedom of choice can be, Sircy said.

“We get very busy in our daily lives that I think sometimes we forget about the things that are worth living for, and I think this book calls attention to that,” Sircy said.

“The Screwtape Letters” by C.S Lewis

“The Screwtape Letters” is a religious satire that focuses on a conversation two tempters, also known as demons, have through a series of letters during the book, Veronica Pierre, senior part-time library employee said. The tempters constantly talk about a human man they are messing with and the hypothetical effects they are having on his life, Pierre said.

“This book will make you wonder why you do what you do,” Pierre said. “I like books that make people think and ask questions. I think asking good questions is worthwhile.”

“The Song of Achilles” by Madeline Miller

According to Goodreads, “The Song of Achilles” follows the tale of the Greek mythological characters Achilles and Patroclus, as they create an inseparable bond despite risking wrath from the gods.

“It represents two men in love, which isn’t a love story that we get to hear about often,” Erin Caudill, senior social work major and student worker said.

The book has a balance between love and war as there is action involving the Trojan War as well as a love story following the main characters.

“Even though you know what’s going to happen, nothing can prepare you for the sadness it brings,” Caudill said, “I love this book; it’s written so well, and I never wanted to put it down, anytime I got the chance to read it, I did.”

“Acheron” revolves around Greek gods and goddesses. Acheron is about 10,000 years old and is searching for someone to love and accept him,  Selina Langford, an access services library assistant said. “The novel has a theme of we all want to be loved and appreciated, and that’s why I’d recommend it,” Langford said.

It has a time shift from ancient times to more current ones and shows how his life develops throughout, Langford said.

“The book also depicts the battle of good and evil, which is always a running theme throughout life,” shesaid.

“La Chatte” is a novella about a man named Alan and his cat. He marries a young woman named Camille, and it is a disastrous relationship because it becomes a love triangle between the three of them, Sean Kinder, the humanities and social studies librarian said.

“It is absolutely beautifully written and very poetic; Colette is a writer known to appeal to all the senses,” Kinder said.

Colette depicts the connections between animals and humans throughout this book, and how delicate that relationship can be, Kinder said.

“I also like what she has to teach us about love, relationships and our connection with animals along with our place in the world,” Kinder said.

“Percy Jackson and the Titan’s Curse” by Rick Riordan

“Percy Jackson and the Titan’s Curse” is the third book from the Percy Jackson series and follows Percy on a hunt for his missing friend Annabeth, Alexander Newell, a sophomore and part-time library employee said. According to Goodreads, it leads five half-blood heroes on a quest to defeat the doomsday monster, but the oracle has predicted not all of them will survive.

“There’s a lot about sacrifice and dealing with loss, and the storytelling is very compact, so if you don’t like long books, this is a good one to read,” Newell said.

“Show Me How” by Derek Fagerstrom, Lauren Smith and The Show Me Team

“Show Me How” is a compilation of 500 different small hobbies people can do. “If you have some free time, this book is awesome to flip through and find some cool things to do,” Tishida Robertson, an access services library assistant said.

From learning to juggle to making a flower bookmark, this book is filled with all sorts of activities.

“This book will teach you a lot of things, and college is all about learning, and this will help you learn,” Robertson said.

According to Goodreads, Quentin Jacobson follows trails of clues to try and solve the puzzle of the missing girl, Margo. As Q gets closer to finding Margo, he realizes she is not the girl he thought he knew.

“It’s a good book about mystery, but it is also a movie, so if you enjoy watching the movie, you’ll also love the book,” Pitts said.