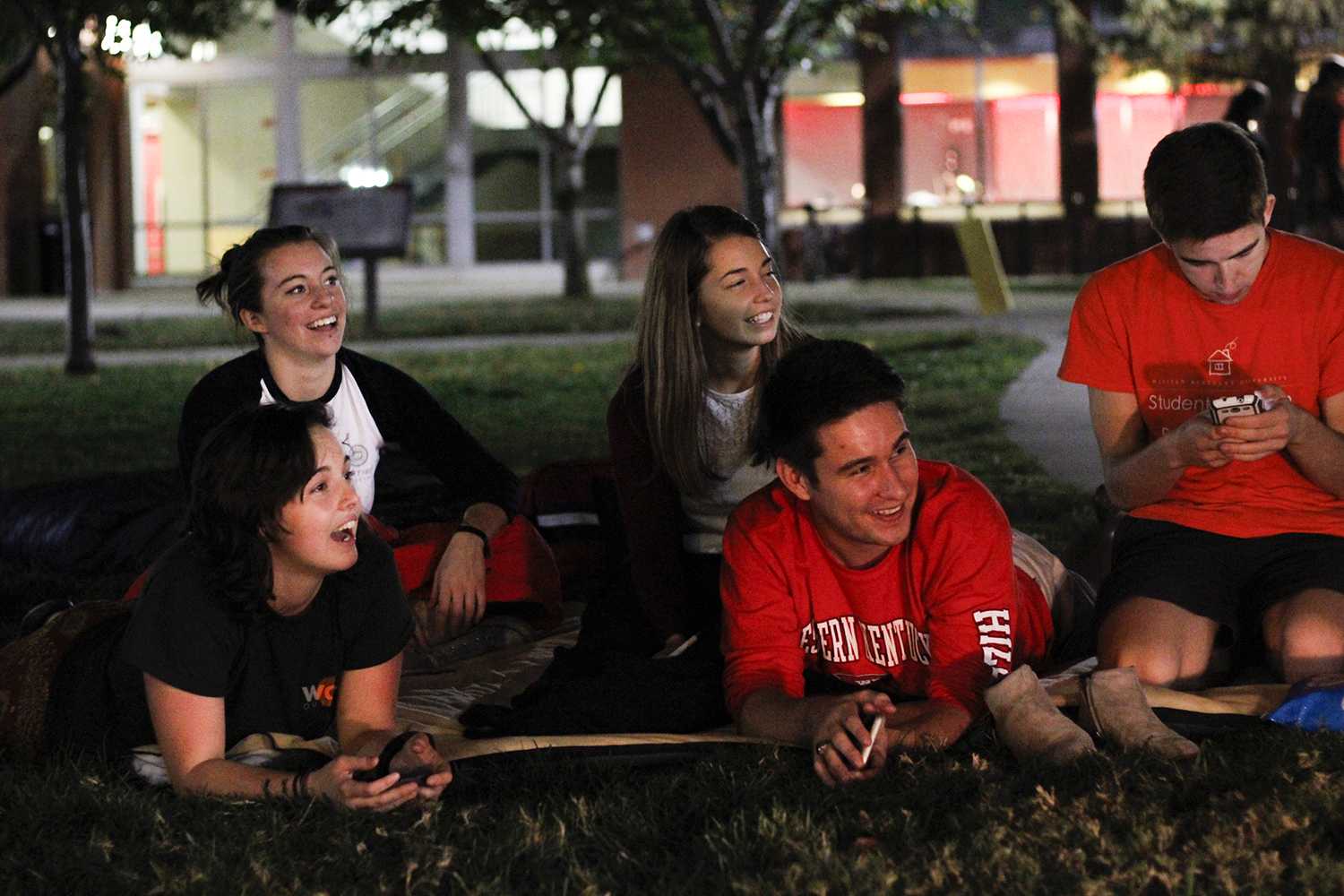 A live-in for housing fairness

Two small bedroom lamps lit up a small patch of grass near Centennial Mall where a laptop, a Bose speaker, a projector, a small screen and a dozen students were gathered on Thursday night, November 3.

Bags of leftover Halloween candy were tossed around the tightly-knit circle of blankets and sleeping bags. The movie “Shrek” played on the projector screen and students laughed and called it a “cinematic masterpiece” as they stopped to Snapchat the event. A chorus of Smash Mouth’s popular song, “All-star” echoed into the chilly Western Kentucky night.

“He huffed, and he puffed … and he signed an eviction notice,” said Little Pig, a character in the movie.

Those seated around the projector screen were gathered for the Renters’ Rights Live-in, an event that was designed to raise awareness of housing fairness in Bowling Green.

“While it was humorous and silly, the purpose of the event was very serious and something that many people deal with regularly in our community,” student body president Jay Todd Richey, a Glasgow senior, said.

The event was hosted by the WKU Student Coalition for Renters’ Rights, a grassroots student group that seeks to advocate for renters’ rights and the passage of the Uniform Residential Landlord and Tenant Act in Bowling Green.

Leading up to the 2016 city commission race, URLTA was a frequently discussed topic.

On campus, the Student Coalition for Renters’ Rights was started by James Line, a Bedford senior and Student Government Association chief of staff, and Richey during the summer of 2014. They said they realized unfair housing was a significant issue in Bowling Green after getting involved with the local chapter of Kentuckians for the Commonwealth.

“We came to college looking for a way to get involved and do something really big and important,” Line said. “Something that would make a big difference in the community.”

URLTA is a housing act that is optional for cities in Kentucky to adopt. It requires landlords and tenants to sign a contract in an effort to clearly define the relationship between the two parties.

Warren County is one of 101 counties in Kentucky that does not have URLTA in place. This means that leases can be kept unclear.

Basically, if you live in Bowling Green and it’s not in your lease, it’s not covered.

Line said that slumlords take advantage of college students because most don’t know how to properly read and understand a legally-binding lease. He said students will sign a lease and be evicted after a couple months because of something they didn’t understand or something that wasn’t covered by the landlord in the lease.

“Homelessness on campus goes under the radar,” Line said. “They may not have mom and dad to help them out, and they end up living in their car.”

Line said unfair housing is a direct link to homelessness and that single mothers, international students, the under-privileged and people of color find themselves heavily affected by unfair housing.

Courtney Thompson, a Frankfort junior, set up her tent on the Centennial Mall lawn, and she came prepared with pillows, a tarp, a sleeping bag and backpack full of camping necessities. Thompson said she understands the fear of not knowing whether or not a landlord will come through when something goes awry.

When the basement of her rental house flooded after a party, she didn’t know how her landlord would react. Having not been defined in her lease, Thompson’s landlord could have chosen not to repair the damages.

“We were scared to death wondering if our landlord was going to cover this,” Thompson said.

Thompson did not get evicted, and her landlord covered the damages. However, she said some renters might not be as lucky.

Thompson’s internship with Kentuckians for the Commonwealth got her involved with Bowling Green’s fair-housing initiative. The Bowling Green chapter considers homelessness and the lack of resources designated to helping the homeless the main issue facing the community, Thompson said.

She, along with Line and Richey, sat on the lawn and watched the movie play.

The fairy tale creatures were forced out of their homes and onto Shrek’s swamp — symbolism for the housing rights that are being withheld from Bowling Green residents.