Popcorn is not the expected smell when walking into an art exhibit, but in the Capitol Arts Center gallery room, it lingers at Artworks Inc.’s new exhibit. The colors of the paintings, collages and other art pop against the off-white walls, and the street-facing window brings the feel of a bigger city to Bowling Green.

ArtWorks Inc. held a public reception for an art exhibit featuring a robot on skates, baking materials and packing paper in the Capitol on Feb. 20. The exhibit will be available for viewing until Feb. 27.

The exhibit’s theme is recycled art, and though the idea came from a meeting only two months ago, the artists embraced it and produced work quickly.

“I’m sure (the artists) had a lot of these recycled materials laying around and for them to make a new piece out of it is pretty amazing,” said Janet Young, president of ArtWorks and director of the exhibit.

Artist Myra Dwyer brought her childhood to life in one of her works for the exhibit by using things that make her nostalgic, such as a fishing hook and a bobby pin. 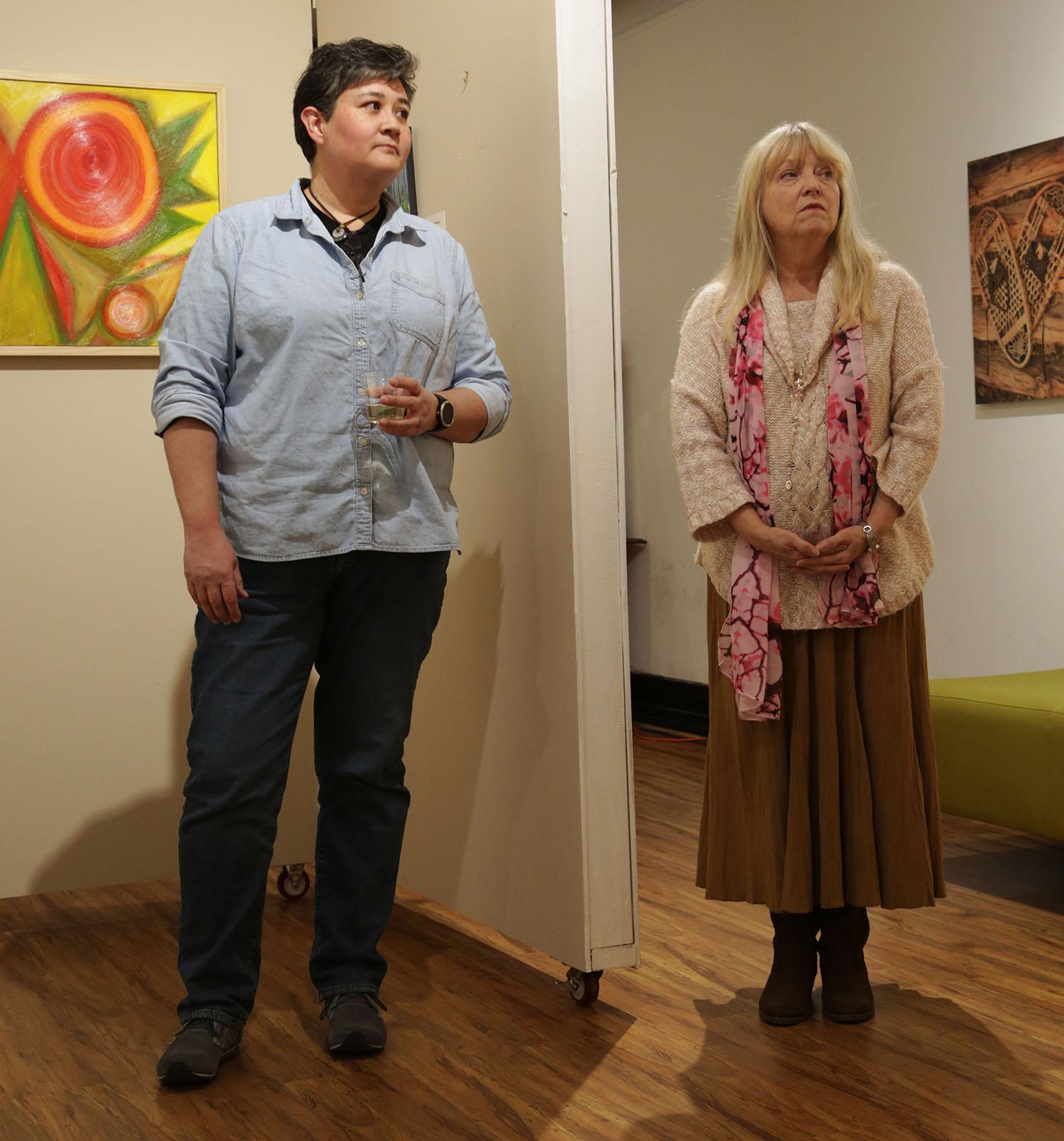 Janet Young (left) is the president of Artworks Inc. and the director of the exhibit. Lana Williams is an artist featured in the exhibit.

“My father was a fisherman,” Dwyer said.  “My mother was a schoolteacher, and back then they all wore pin curls, so the bobby pin reminds me of her.”

To create the piece, Dwyer started by gathering the fishing hook, bobby pin, a birthday candle, a paint brush, jacks, and several other things, then used medium gel to adhere them to canvas.

Artist Suzanne Menck, who uses a lot of watercolors, took another approach to creating recycled art.

Menck tore up some of her own watercolor paintings on paper and adhered them to canvas, then touched them up with acrylic paint. She took a previously made cityscape and transformed it into a tree trunk and the center of a poppy flower into a red awning on a New York City street.

Looking at Menck’s canvases, neither the cityscape nor the poppy are apparent until she points them out. The lights of the skyscrapers are just dots that make the tree look weathered, and the dimension of the poppy makes the awning look realistically faded.

“When you’re taking recycled materials, it’s garbage basically,” Menck said. “Nothing’s going to be done with it, so if you can repurpose it and make something beautiful and creative out of it — that is the exciting part.” 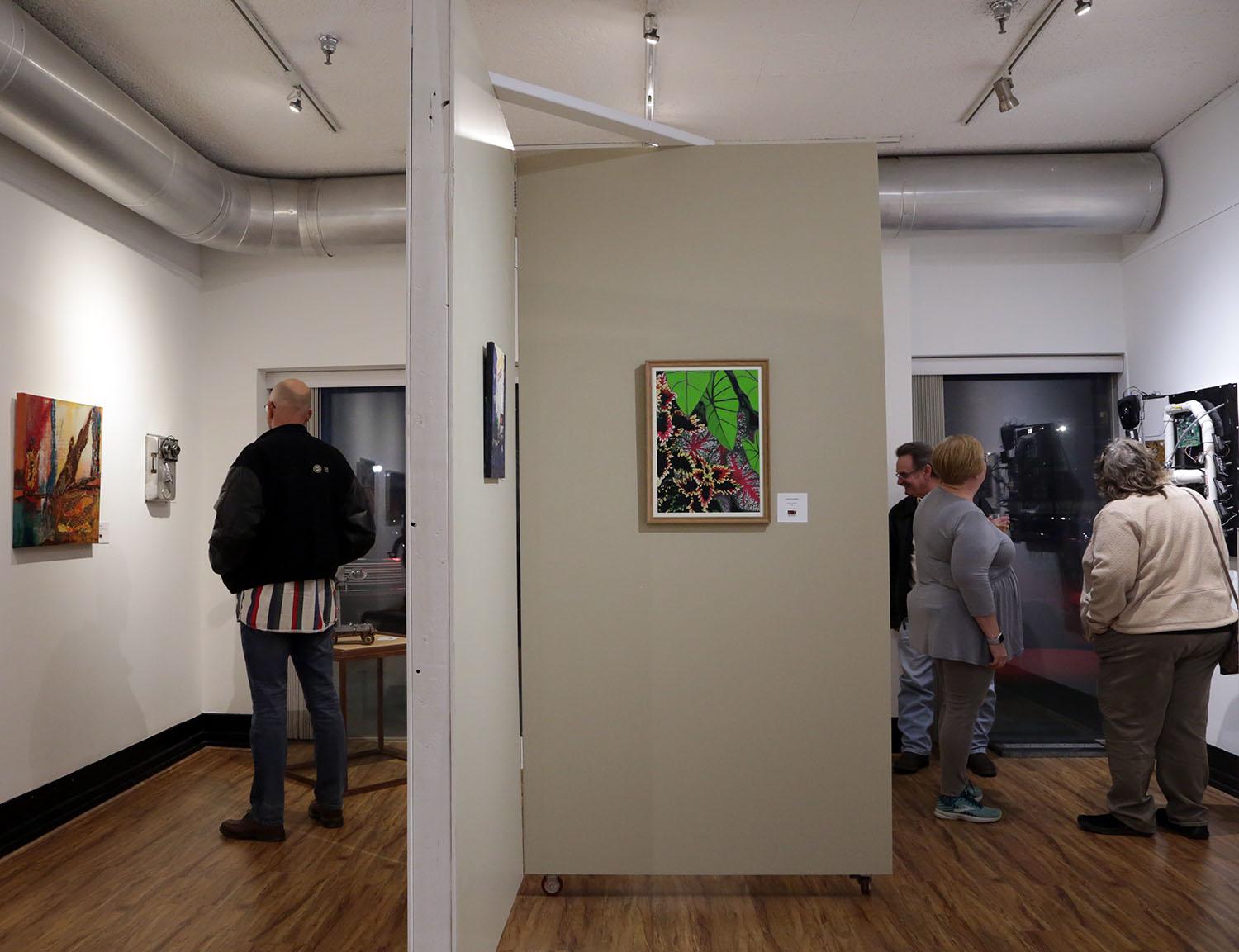 Artists and their families gather around artwork at the exhibit. Each of the pieces were made with recycled materials. The artists took two months to create their pieces.

Menck feels free of the fear of messing up when creating art out of recycled material because she doesn’t need to think about how expensive the materials were, and she is not alone in the sentiment.

Lana Williams, another artist featured in the exhibit, is happy to save on framing. Because she paints on old windows, her works are framed already.

“I live in an old neighborhood, and a lot of the folks redo their windows because they have old windows, so I’m always finding these pitched out on the side of the road and it’s such a shame,” Williams said.

Williams tries to pick up the windows as she sees them and has a lot of fun painting on them, even joking that “if you have a really bad view out of any of your windows, you can hang this up and have a nice, pleasant view instead.”

One of Williams’ works on display is an oil painting on glass that pictures the bottom of the Eiffel Tower with spring flowers. It was originally part of a larger window piece, but when she left that piece outside, “Paris View” fell out. Rather than throwing it away, she brought it to the recycled art exhibit.

“I just think that we use up too many resources as it is and to try to use things that we already have instead of using things that aren’t renewable, or won’t be renewable in the future is a great alternative,” Williams said.