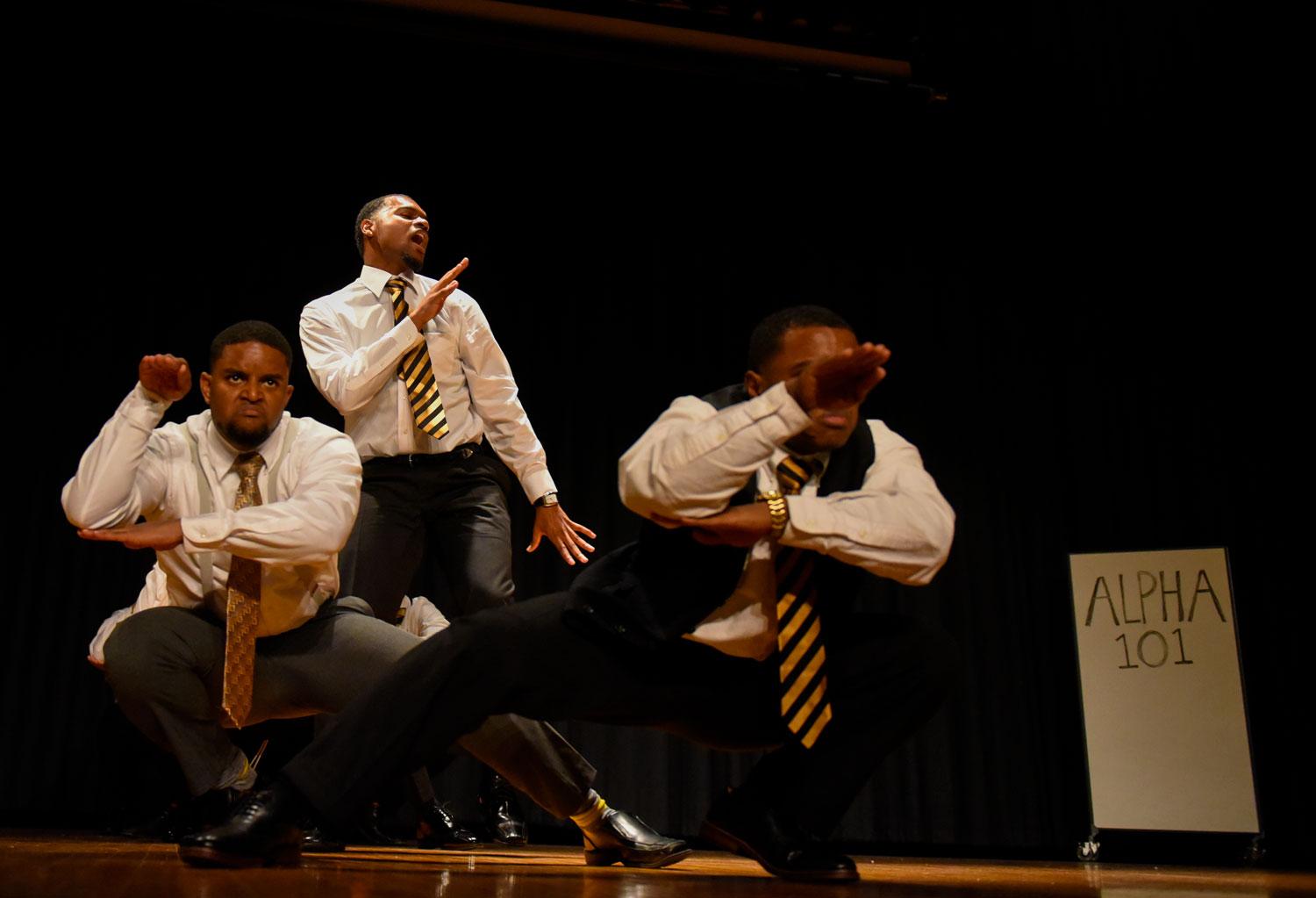 On the evening of Thursday, Sept. 9, the men of Alpha Phi Alpha fraternity took the stage at the annual Yard Show for the first time in four years. They were one of six National Pan-Hellenic Council Greek organizations to participate in the annual event that features NPHC fraternities and sororities and their stepping routines. But for the men of Alpha Phi Alpha, this was more than just another performance.

Thursday night’s Yard Show had just ended, but the energy in the Downing Student Union auditorium was still soaring. And much of it was focused on the Eta Rho chapter of Alpha Phi Alpha fraternity.

Even as the bulk of the audience shuffled out, the cast of Alpha’s step performance took the stage again and strolled out an encore of previous performance to the song “I Got the Keys” by DJ Khaled. Several clusters of lingering Yard Show attendants danced in place along with the music, thrilled to see the performance once more.

The Alphas were savoring the extra attention. Their performance was still in sync, but this time, the second time they’d been in front of the audience that night, their faces seemed more carefree than in their main performance.

Louisville senior Jeff Lightsy, the president of the organization, was one of the Alphas on stage. He said this was what it was all about.

“It’s all in a day’s work,” Lightsy said days before during a late night practice.

This wasn’t just another performance for the men of Alpha Phi Alpha. It was their first since their organization was suspended from the university in spring 2013 for hazing. What’s more, they were hosting this year’s Yard Show.

Yard Shows featuring step routines are a part of NPHC organizations’ culture and heritage at WKU. In a step routine, dancers use their bodies and the floor to create intricate rhythms, sometimes to music, but often for the sake of dancing to the self-made beats.

Step performances, like Thursday night’s Yard Show, are for the public to watch and share in an experience with black Greek culture.

Vice president of Alpha Phi Alpha and Cincinnati senior Adeleke Ademuyewo said the flare that comes with stepping is what he loves the most.

“Stepping is just fun,” Ademuyewo said. “It’s the showmanship of it. I mean, I’ve been doing it for a while now … It kind of turns into a sport or a competition, which, I’m a pretty competitive guy.”

For their first performance back on campus in several years, the Alphas seemed to get a warm reception from many in the audience, including Louisville sophomore Aaliyah Calhoun. She summed up their routine in one word.

“Dope,” Calhoun said. “They were precise, so precise.”

Versailles freshman Camille Carter was also in the audience. She seemed to be impressed, too.

“They’re very passionate about what they do,” Carter said. “Also, their dance showcased how classy they are.”

These were the reactions the Alphas had spent two months hoping and preparing for.

Their practice times varied from as early as 6 a.m. to as late as 10 p.m. One late night, on the roof of a downtown parking structure, only street lamps illuminated the fraternity brothers as they danced with sharp uniformity. They played their music on the stereo of a nearby car in lieu of a speaker system. In the distance, as they performed, Cherry Hall, the WKU water tower and the buildings of downtown Bowling Green stood like giants in the night.

Alpha Phi Alpha practiced like this almost daily for months.

Their routine represented many of the values and historical elements of their own fraternity. Titled “Alpha 101,” the fraternity’s step took the setting of a classroom. On stage, there were the typical classmates: the bad kid, the class clown, the guy with the snacks and the teacher’s pet.

“We’re trying to have something that people can relate to,” he said. “The class name is Alpha 101 because we’re Alphas.”

The characters in the skit weren’t the only ones being schooled. If the audience was looking for it, they may have noticed many nods to Alpha Phi Alpha culture in their step routine. For one, the number of dancers exactly matched the number of founding members of the fraternity at Cornell University in 1906.

Even their song choice held personal meaning for the fraternity brothers. They used “Magic” by Future, a reference to the last Yard Show the Alphas performed back in 2012 before losing university recognition for about four years. They said the decision to use that song was meant to represent the revival that Alpha Phi Alpha gained last spring when the organization came back to campus.

Lightsy said there were even more cues in their performance meant to connect to the students and audience members.

“In my two moves that I do on stage, the first one is one called ‘the Louisville Bop,’” he said. “I’d say a good 30 to 40 percent of WKU’s black population comes from Louisville … When I get on stage and I do that, even if you’re not from Louisville, you know that dance.”

When the Alphas got off the stage for the second time, the audience cheered yet again. As the spectators spilled out of the auditorium and into DSU’s hallway, South Bend, Indiana junior Taryn Washington was still talking about their performance.

“They killed it,” Washington said. “I honestly think they were perfect. You can tell they’ve been working hard … It was their show, and they ran it. For real.”