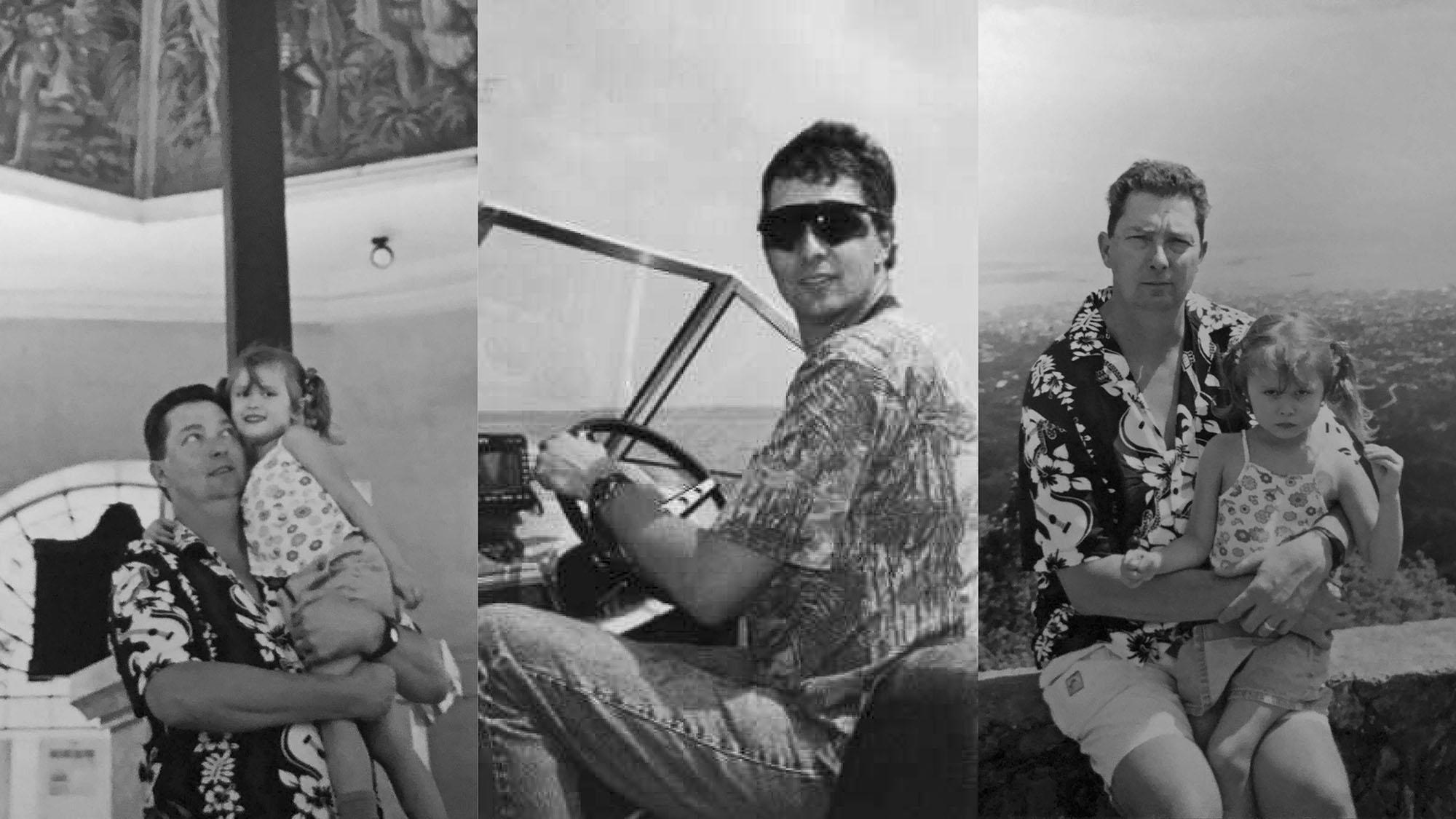 Before and after: When death isn’t dark anymore

When you are 7 years old, there is a lot about the world you don’t understand. Some 7 year olds are still struggling to learn addition; some don’t know how to tie their shoes, and some are not yet dressing themselves. Most of us were blissfully unaware of death, and I was no exception.

I have always separated my experiences into befores and afters. Before my father died, I got gold stars on addition worksheets, and I knew how to tie my shoes. I didn’t start dressing myself until after.

On the last morning I remember with my dad, he accidentally swallowed mouthwash after brushing his teeth. I didn’t know at the time, but he had been feeling a tightness in his chest, and after playing a game of golf with my mother, he was taken to the hospital where a heart catheterization was performed. During the heart cath he went into cardiac arrest. When he died, I thought that it was because he swallowed his mouthwash.

The hospital, in my memory, was not bland or bleak. I remember the lights being bright, and I didn’t feel any sense of a terrible fate. My mother, my paternal grandparents, my aunt and I were in an empty room at a large, walnut conference table when someone came to tell us my dad died.

I remember the walk to say goodbye to him. I did not understand what was going on, but I was upset because my mom was crying. My grandfather walked with her in front of me, and my grandmother was holding my hand behind them.

When we entered the room he was in, my dad looked like he was asleep. I knew that he wasn’t sleeping, but I didn’t understand that he was dead. I remember that someone told me to kiss his hand and tell him that I love him. I did.

My dad was well known where we come from. Being a star basketball player at the high school, a regular at the Ballard County Country Club and the owner of a hunting club was enough to reach hometown celebrity status in Barlow, Kentucky. Because of this, the days following his death were filled with people ― many of whom I didn’t know. For the most part, the people and the days are a blur.

At the visitation, I remember being with my childhood best friend Stephanie. We were giddy, giggling and running around repeating to each other, “Look at all the people.”

We were amazed by how many were in attendance as we played with yo-yos we won through a school fundraiser. There were floral arrangements everywhere, along with an abundance of stuffed animals. I begged my family to let me take one home. I chose a brown teddy bear with a gold bow sent from my first grade class.

The funeral was two days after my dad died, and the only clear memory I have of it is seeing him for the last time. Though I still didn’t comprehend what was happening, I knew that moment with him would be my last. I don’t remember anything about the graveside service.

My paternal grandparents cared for my mother and I in the following months. My father died in late May, so I was out of school for the summer. Many of my memories are gone from this time, but I remember being comfortable. Before, I had spent Friday nights at my grandparents’ house, so to me it felt like a long sleepover. We played pretend every day and stargazed every night. We must have watched “Ella Enchanted” 20 times.

My mother immigrated to the U.S. from the Philippines to marry my father. They were pen pals for six months before they met, and he flew to meet her once before she made the decision to leave her life in the Philippines to be with him. When he died, she wasn’t a citizen of the country. She had friends here, but her family was an ocean away. She had no understanding of what happened legally to the widow of a man in this country, and she was afraid.

A lawyer’s office is far from the first place a 7-year-old would like to be, but I remember being there. My paternal grandfather ensured that my mom and I were safe and that my dad’s estate was allocated properly. At the time, I was still blissfully unaware of what was happening.

My grandparents let us stay in their home and helped us in every way imaginable, from taking me to Disney World the next year, to driving my mom to her citizenship ceremony, to accompanying us the first time we returned to our home.

By the time we went back around three months later, I understood that my dad had died. I walked through the hallway knowing we would never watch “Tom and Jerry” together on Saturday mornings again. I would never hear him say, “The last one to bed is a rotten egg,” again. It was a lot to take in. The house felt as empty as one would expect following a major loss.

For a young person, I think I’ve experienced a great amount of loss — first my dad, then an uncle, an older cousin, a classmate, a high school friend, my grandfather and more. The thing about grief is that it unfolds differently each time you go through it, no matter how many times you do. There is no real rhyme or reason to the grieving process. Everyone talks about the five stages, but less often they talk about reverting back to one or skipping another.

I thought that the loss of my grandfather would overpower the loss of my father in a way. Logically, I thought, 18 years with a person would give you more to miss than 7. I remembered more about my grandfather. I could still tell you the way he spoke, how he believed and how he might react to news I would give him. I thought that because I had so much more time with him, it might hurt to lose him more. In some ways I was right.

Grieving my grandfather was, for the most part, a linear process. It wasn’t textbook by any means, but I was able to make peace with his death in a way I haven’t been able to with my dad’s. I have peace with my dad’s death, but in a completely different sense of the word. The grieving is not linear. Instead, it plateaus and curves in every which way.

The single most bothersome thing about my father’s death is the assumptions others make when I begin to open up about it.

I spent a majority of my life feeling a nagging frustration with my own misunderstanding of the grief. I could never put my finger on it. I wasn’t devastated or angry at the world anymore, but there was a restlessness present in me that I could never seem to understand.

Two years ago, on the anniversary of his death, I finally understood the restlessness. I realized it isn’t any sort of negative feeling, but a curiosity. I came to that realization while at work, and I was so excited that I called my mom crying tears of joy.

It goes like this: I wonder every day how my life would be different if he was still here. What would he have to say about everything I’ve done from my career choice, to my failures and successes? Would he have been hard on the boys I brought home? The questions are infinite and there are new ones with each day that I live on without him.

I wonder where we would’ve gone together and how every event in my life would’ve played out differently, so the restlessness makes perfect sense. I don’t remember how he spoke. I never got to know what he believed in, and there isn’t anything I remember to assume how he might react to what’s new in my life.

Still, the curiosity is not something that saddens me all the time. It is difficult to share the sensation with anyone that hasn’t experienced it firsthand because the assumption is that I am constantly plagued by “what if” scenarios, but I didn’t cry the day of my first prom because he wasn’t there. I smiled and thought about what he would say if he was.

I could spend hours daydreaming about him being there every second since he died and feel happy at the end of a day. It’s true that I will never stop missing him, but it’s also true that his absence no longer terrorizes me. I’m simply curious about how things would be if he never died.

As I move forward, I’ll graduate from college and get married, and I know I’ll wonder about him through every step. It’s as if I look at everything I do through a kaleidoscope. I get to see how things around me are happening, then I can imagine a multiplicity of ways he would’ve been intertwined with them. None of them are saddening; they feel like bold, brilliant colors.

There isn’t a reason to be sorry any longer because, in an odd way, this part of my grieving is my comfort.