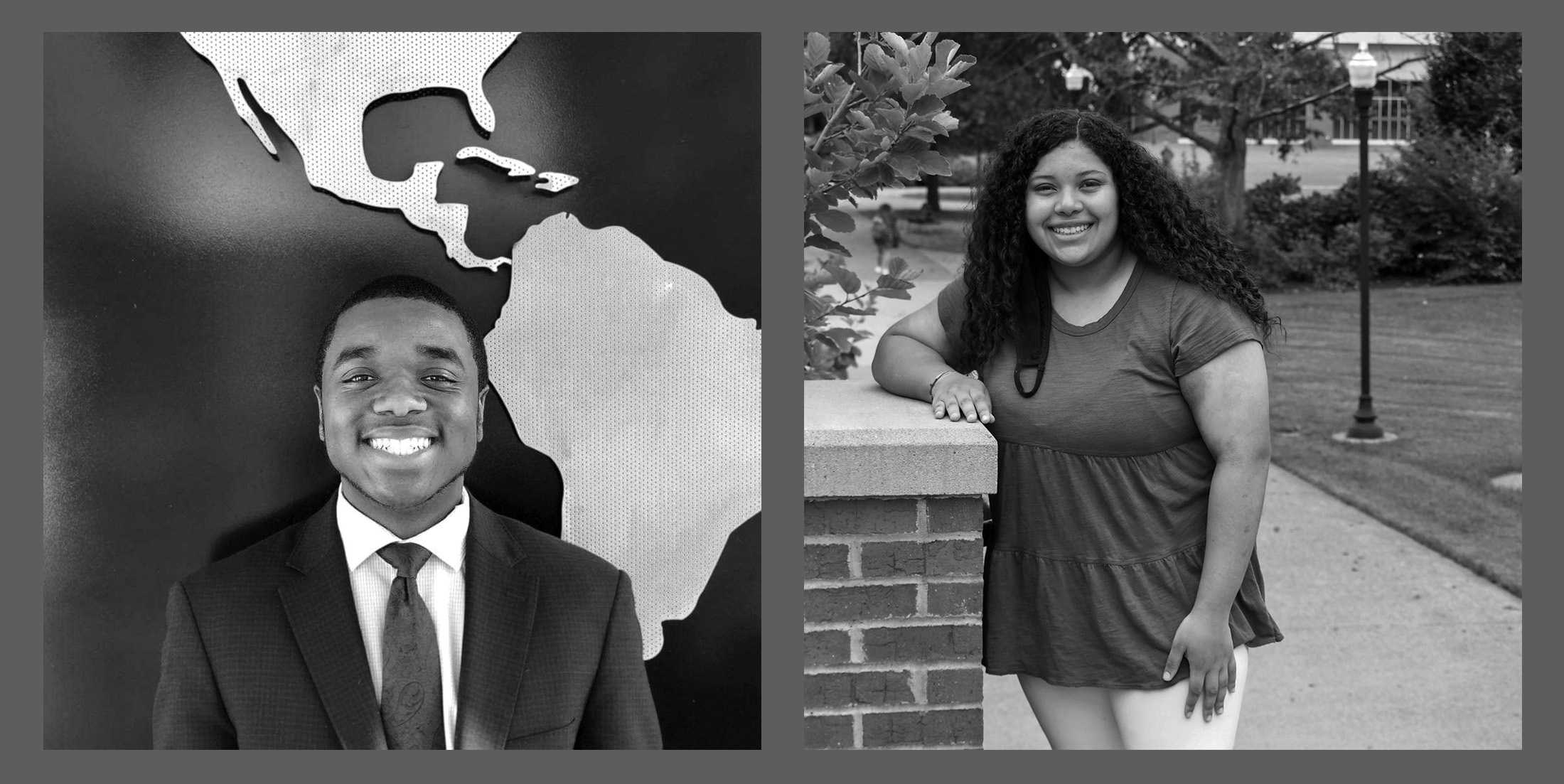 Being Black and Republican in 2020

Editor’s Note: Parts of this article have been updated to better reflect the political beliefs of Saundra Ardrey, a political analyst interviewed for context.

Brandenburg freshman Aryonna Fox is biracial and has both African and European heritage. She is a loyal supporter of President Donald Trump and voted for him in this year’s widely anticipated election. An often underrepresented group, young, Black Republicans are present in U.S. politics.

As a Christian, conservative principles such as an anti-abortion stance and an opposition to same-sex marriage align more with Fox’s religious beliefs.

Fox is not alone in her support of Trump and the Republican party as a whole. Damon Brown, a WKU alumnus from Kansas City, Missouri, also identifies as a Republican.

Brown said that Trump’s appeal is in the minds of Black voters lies in his economic policies and his favor of school choice and charter schools, which have the ability to give Black students a quality education — something Brown said the Democratic party “robs” Black students of.

As for himself, Brown said he is voting for Trump to keep income taxes low and advance school choice, which allows “public education funds to follow students to the schools or services that best fit their needs — whether that’s to a public school, private school, charter school, home school or any other learning environment parents choose for their kids,” according to EdChoice.

The Black Lives Matter movement, reignited by George Floyd’s death, rose to prominence during Trump’s presidency. It is not, however, uncommon for Black Americans to hold conservative views and be in support of Trump’s reelection. In fact, Saundra Ardrey, a WKU political science professor who is a Democrat and not a Trump supporter, said the majority of Black Americans hold the same conservative values that are the foundation of the Republican Party.

“On the social side, we’ve always been conservative,” she said. “We’re right there with the Republicans. Black folks don’t support abortion; we tend to be more pro-life. We go to church more often. We believe in the family unit. We have strong morals, contrary to what the media says.”

While their values are socially conservative, Ardrey said Black people are still more economically liberal. For this reason, the majority of Black people have voted for Democratic candidates.

The majority of African Americans have voted for the Democratic Party with “no Republican candidate receiv[ing] more than 13% of the African American vote since 1968,” according to Ismail White and Chryl Laird of the Princeton University Press. Even still, “African Americans are one of the most conservative blocs of Democratic supporters.”

During Trump’s presidency, many Americans have seen their stocks flourish, Ardrey said.

This uptick in investment return is something Ardrey believes sways Black people toward voting to reelect Trump. Additionally, she said conservative Black people are “impressed” by the right-wing idea that one’s success is up to the individual and is unaffected by outside influences such as socioeconomic status.

Despite her economic gain under the Trump administration, Ardrey said she doesn’t support his presidency.

“I also have a soul,” she said. “I also am Black, and I can’t sell my soul just because you’re making me money. My Black consciousness, my group consciousness will not allow that.”

She also said that fear of her son becoming a victim of police brutality contributes to her support of the Democratic Party, as she sees Biden and his running mate, California Senator Kamala Harris, as candidates who can help guarantee a safe environment in the country.

It is Biden’s Violent Crime Control and Law Enforcement Act that upsets Brown.

“Joe Biden had an opportunity while serving as vice president in the Obama administration to right the wrong of his ‘94 Crime Bill, and he did not take it,” he said.

The controversial 1994 crime act Biden created while serving as a U.S. senator disproportionately impacted and placed Black men in jail for minor offenses at higher rates than men of other races.

One effect was the three strikes law, which contributes to the increased rate of imprisonment of Black people for minor offenses, and the enabling of “rampant police misconduct” in neighborhoods of color where officers were deployed at a disproportionate rate compared to white neighborhoods, according to Shannon.

Prosecutors were allowed to charge children as young as 13 as adults for certain crimes under the crime act, which contributed to an exacerbation of the school-to-prison pipeline, an issue that affects many Black youth. The result of this is still felt in Black communities today as “two-thirds of Americans who were sentenced to life in prison as juveniles are Black,” according to Shannon.

“In the five years following the bill’s passage, 74% of defendants with death penalty recommendations from federal prosecutors were people of color,” the article stated. “Notably, 44% were Black.”

Additionally, Brown said Biden’s opposition of school choice means “Black students and all low income students will not have access to a quality education.”

A poll conducted in August by The Hill showed that Trump’s approval among Black voters increased by a margin of nine points to a total of 24% of the surveyed population. Only two weeks earlier, the percentage of Black people who approved of Trump’s policies was just 15%.

Fox and Brown theorize that the rise of both peaceful protests and violent riots associated with the Black Lives Matter movement contributed to this increase in support at the time.

In regard to the Black Lives Matter movement, Fox said she is against the movement and that she believes it is a “terrorist organization” that was “never peaceful.”

She said Black people in support of the organization “believe everything bad happens to them because of their skin color.”

Brown also expressed discontent with the movement. He said that the organization’s objective to defund the police department is unpopular with Black voters (because they would rather see police reform) and may have contributed to the rise in support Trump has seen among registered Black people.

Trump’s position on police reform is something that may increase Black people’s support of his administration, he said.

However, Trump did not escape Brown’s judgment.

“President Trump has to do a better job of recognizing that corruption exists at all levels of government, including law enforcement,” he said. “This does not mean vilify the entire police force, but understand if the FBI can go after a sitting president, imagine what some would do to the average citizen.”

Brown said that most of the Black people he’s spoken with agree that Trump’s economic policies have made them better off, although they question whether he is committed to helping Black voters.

“I tell them to vote with their pocketbook,” Brown said.

Ardrey said she believes how Trump conducts himself as president has impacted race relations today.

Some conservative think tanks, like The Heritage Foundation, assert that Marxist beliefs of some founders of Black Lives Matter affect the movement’s perception in eyes of Americans.

“It’s a concerted effort to discredit the Black Lives Matter movement,” she said.

This contributes to why some conservative Black people do not support the movement and are voting for Trump.

Despite her firm political beliefs, Fox reiterated that she is a Christian first before she is a Republican.

“I will love these people, but I will not support their sins,” she said.

People of color who identify as Republicans often receive backlash from their own communities because of their political affiliation. The retaliation is rooted in the expectation that people of color vote in alignment with the Democratic Party.

This assumption is harmful to all people of color, but especially those of African descent, who face the risk of being criticized not only by their white peers, but by their Black ones as well, for not conforming to stereotypes and going against the political grain.

Brown has faced his own reprisal in expressing his support for Trump’s reelection.

Brown said that people who disapprove of his politics usually give one of two responses.

“Response one: I am a lost brother,” he said. “Response two: I might vote for him too.”

Fox’s experience with other Black people who see her political affiliation and her biracial identity as a conflict of interest was less forgiving than Brown’s. She said they think she’s lost her mind.

“They believe I am anti-Black and not for the Black community,” she said.

In his own daily life, Brown said that while it is “typically Black men who also support President Trump,” he’s noticed that some Black business owners, law enforcement officers and people in labor unions also favor Trump over Biden.

“This is why we, Black voters, cannot be put in one box,” he said. “We are a very diverse demographic with our own values and priorities.”

Brown said many Democratic Party leaders tend to take for granted Black people’s support of their politics and view them in an unchanging lens.

“The left side has constantly lied to and manipulated the Black community,” Fox said.

Ardrey also believes Democrats have taken Black people and their vote for granted in the past.

“The only thing that we get during a presidential election time is ‘get out and vote’ strategies because they don’t try to convince us to vote for them because they know they got our vote.”

The reason behind these strategies is that Black voter turnout will be high, according to Ardrey. Similar to Brown, she disputes the idea among politicians that Black people are monolithic.

Ardrey said without the ability among Black voters to sway votes, Democrats are able to take Black people for granted while the Republicans can “ignore” them because the majority of Black people vote for the other party.

“I wish that we had the ability to oscillate, because if we give 90% of our vote to the Democratic Party, the Republicans can ignore us,” she said. “The Republicans — Trump — might be saying, ‘I’m never going to get their vote anyway,’ and the Democrats will say, ‘We don’t have to do anything because we got their vote.'”

Despite the alienation Fox has described experiencing from being a Black Republican, she reiterated her unwavering support.

“I’ve lost friends and family over this, but I’m sticking to my morals and values,” she said. “I believe President Trump was sent by God to fix our country.”