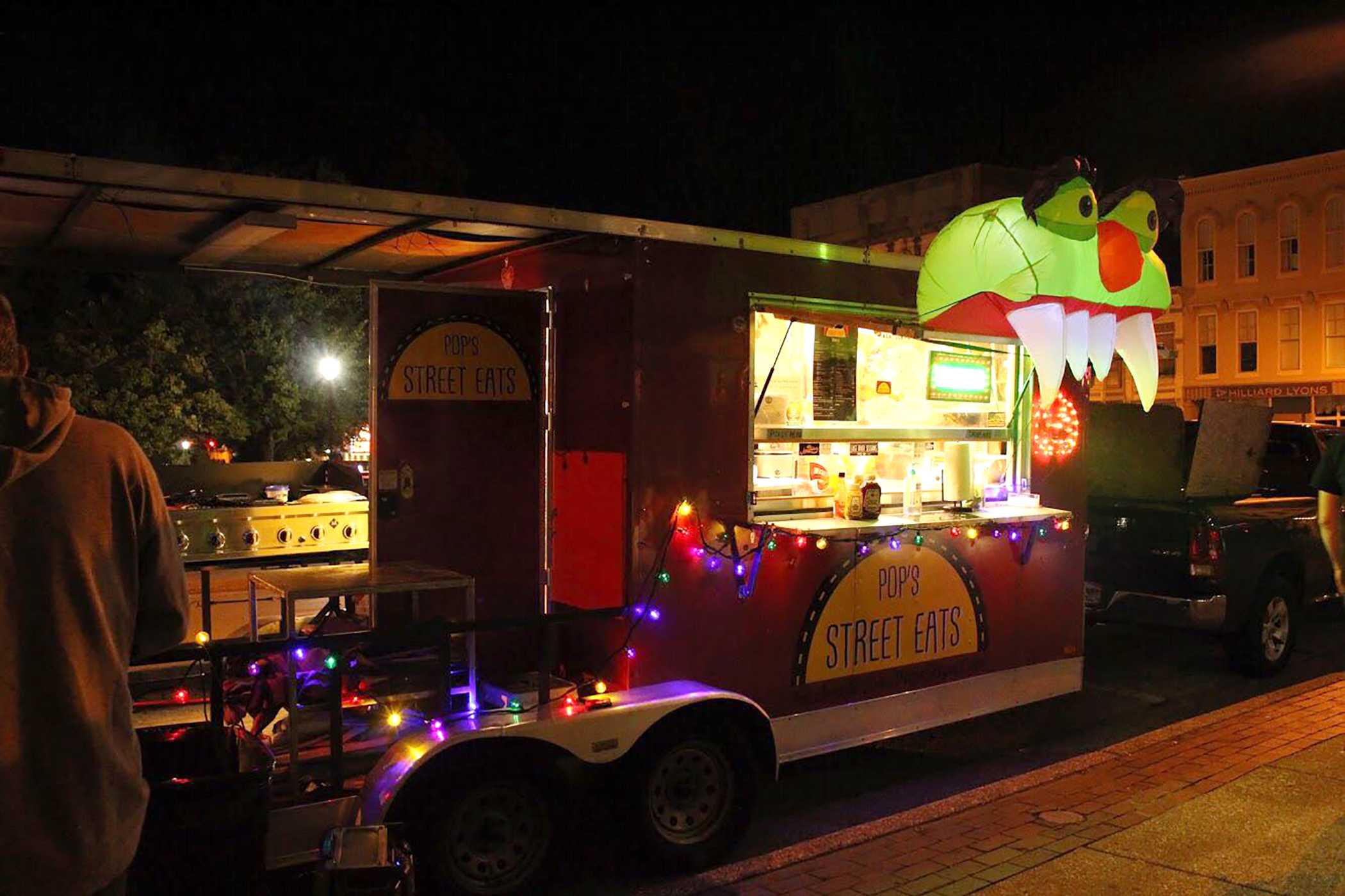 From the Magazine: A day in the life of a food truck

Pulled-pork nachos and 100 percent all-beef hot dog tacos are not the only gifts Mike “Pop” Wilson Sr., owner of Pop’s Street Eats Food Truck, has given to his customers, who he calls street’rs. Serving cuisine to customers and conversing with old friends who pass by has become a common routine on the truck since May 2017. The business began with his two sons working alongside him on the truck after watching a year’s worth of Food Network, Pop said.

Dedicated customers continue to travel wherever the bright red truck is parked with the string-lights suspended above drawing them in.

A day in the life of a food truck owner, especially one with Pop’s busy schedule, is much more than putting melted cheese on a heap of tortilla chips. After brewing coffee at 8 a.m., Pop gasses up the truck for another day of service. But after that, anything can happen.

“It really is something new every night,” he said.

“First thing you gotta do is stretch out the old and work out the cricks,” Pop said after rolling out of bed an hour earlier.

He is on his daily trip to Sam’s Club to purchase their freshly made rotisserie chicken to use throughout the day. Sam’s employees recognize Pop’s wide grin and full red cheeks, encompassed by coarse gray facial hair as soon as he steps up to the counter.

Most of Pop’s Street Eats’ planned events begin at 9 a.m. Pop is typically on-site prepping for the day and communicating with event planners. Today, he’s at the Harley Davidson showcase in Bowling Green.

While enjoying the musical acts at the event, attendees line up to enjoy Pop’s taco and nacho creations, as well as offerings from other vendors.

Pop arrives at home and takes a much-needed nap that will give him energy for the rest of the night. While he sleeps, Pop’s wife cooks the pork and preps the food he’ll need on the truck for the night.

“You can try to guess the amount you’ll need for the night,” Pop said. “But when it all comes down to it, it’s all trial and error.”

Pop leaves the house to prepare for the night, making his routine stops along the way. Pop begins by filling the generator with gas and the grills with propane. Then he goes to Sam’s Club and Kroger to pick up the necessary groceries. He will go to Sam’s Club twice in the day if he knows he will need more supplies. Finally, he gets enough ones and quarters out for the night from either grocery store he visits. He said some nights he also has to visit the local Mexican grocery stores for his more selective spices.

The food truck arrives downtown outside Dublin’s Irish Pub, only to find out the spot has been taken by another vehicle and flatbed trailer already. This is a common issue for food trucks, but not for antsy bar-goers waiting for their dinner.

“Whosever’s truck this is, move it out of the fucking way,” Jeremy Howard shouted, defending Pop and the truck.

Pop parks a few spaces away with help from an Uber driver, whom he repays with chicken tacos. The noise of the grill starting up and the smell of hot nacho cheese seems to form a gravitational pull bringing customers to the truck. Chairs are set out on the sidewalk for customers’ convenience although the truck is not fully open for business yet.

The grill is ready, the meat is sizzling, and the arrival of street’r, Anna Holman, and boyfriend, Austin Beard, have received their meal. Holman has been coming to Pop’s since the truck’s opening and said she has become quite a “Pop’s connoisseur.”

Holman started frequenting the food truck when she lived at Midtown during the 2017-18 school year.

“Going to Pop’s was a nightly routine,” Holman said. “Every weekend it was party,” She said. “Pop’s, home, in that order.”

This devotion to Pop’s Street Eats was passed onto Beard, who is now a large supporter of Pop’s as well. Asking how Beard was enjoying the food, his only response was a wide-eyed nod. 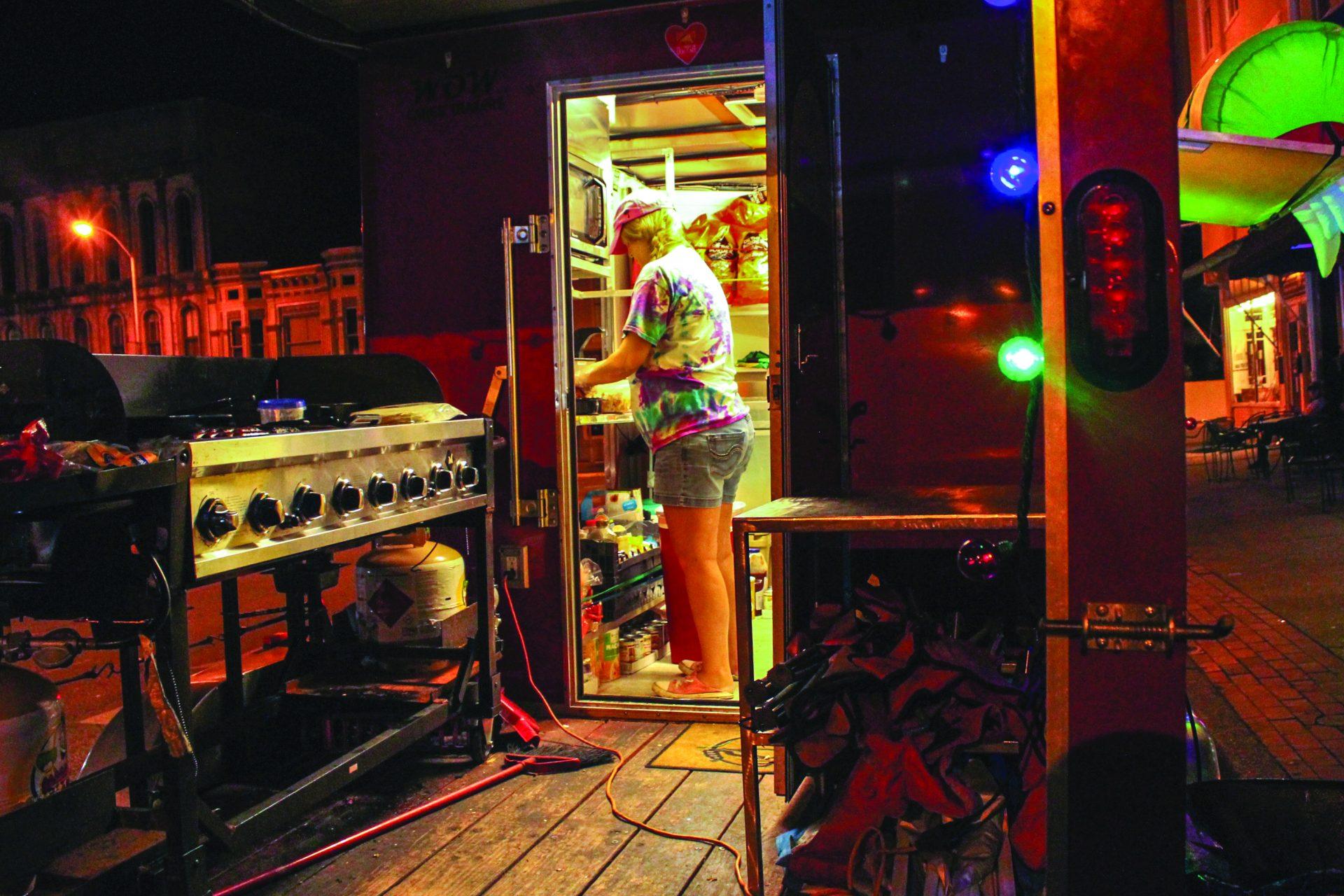 Pop has many volunteers from the community that come and help on the truck throughout the night. One of the volunteers, similar to that of a bodyguard, arrives at this time and watches over Pop and the truck, in case any misdemeanors occur. Pop said he once had his tip jar was stolen.

Due to the unavailability of parking, the lights to the truck were flipped on slightly later than usual. He had been serving the eager street’rs up to that point before officially opening. The generator begins to roar, the pre-chopped veggies are restocked and pickle jar opened, more meat is put on the grill and the cooler is restocked for the next wave of customers.

Howard departs, leaving Pop with yet another satisfied customer.

In passing, a returning Pop’s customer, Gail, begins randomly singing and dancing in front of the speakers on the back of the truck. Pop introduces her because he has seen her energetic dancing around the truck before.

“Let me tell you, this truck — is awesome,” Gail said. “But, it’s the music that brings people together. It has feeling, and people love that.”

Pop changed the station on his music player from Adele to ‘50s music because he said it is the young people’s favorite.

Three young adults pass while “Sittin’ on the Dock of the Bay” by Otis Redding blared from the speakers. They dance and grin while walking from one bar to the next.

Few customers approach the truck during this time but Pop manipulates the music to entertain and recruit more customers.

“From one to two, we’ll rock this block,” Pop said.

Customers approach Pop with new stories to tell about changes in their lives. Pop sits and eagerly listens to the long-time customers, the newbies, and their life events, whether they be comedic or on the more emotional side.

The line at the window grows with famished bar-goers, getting their meal of the night.

Pop delivers on the promise of rocking the block, playing Jimmy Buffett among other classics that lure in the dwindling bar crowds.

Customers still line up at the truck’s window. In between these groups, more meat is put on the grill, another oversized bag of tortilla chips is opened, more paper towels are put out for the over-loaded pork nachos, and the music remains at high-intensity.

Another voluntary bodyguard continues to watch over the truck as workers from late-night bars stop by for their dinner that will sustain them on their drive home.

Lids are popped onto containers. Paper plates and silverware are restocked. The grill cools. Finally, the freshly-made pork is packed up to be used within the next three days.

The roar of the generator is cut off with the lights, and the expired pork leftovers from nights before are tossed. Bags of chips are rolled up, waiting for the customers of tomorrow, and the pickle jar is sealed. Pop collects the chairs from the sidewalk and straps them to the trailer, along with any other loose content that could fly at every street bump.

Pop puts the truck in drive and heads home with the darkened trailer attached to the tailgate, ready to be up in four hours for the next day of business.

“It’s really become a lifestyle, and I completely love it,” Pop said